I left the coop chicken door open last night so the chicks where already out in the run today when I got it going. They were running around feeding away.

A bit later I sat in the pen and noticed some chicks where up in the high roost for the first time. They go up the ladder to get up there and sorta fly down when they want to come down. 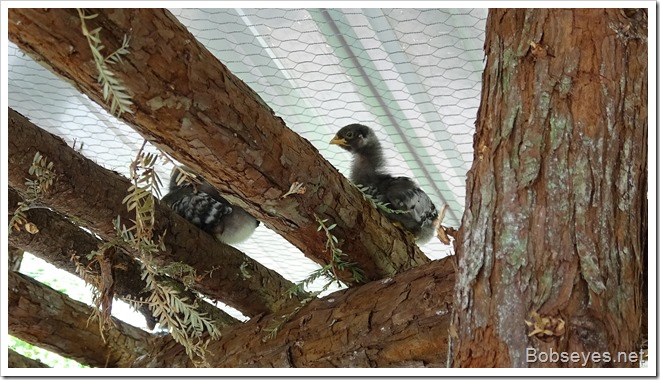 Some of the chicks use the lower resting pole I put in there. They are resting after a hard morning foraging food. 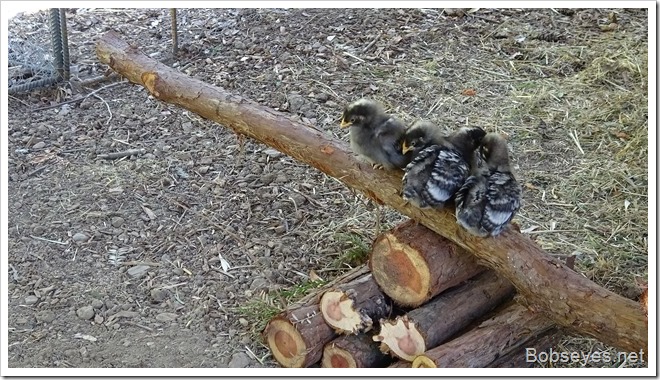 I put this straw in the pen yesterday for a possible future bed for the chicks when I shut them out of the coop. I was surprised to find a bunch of them resting on it. 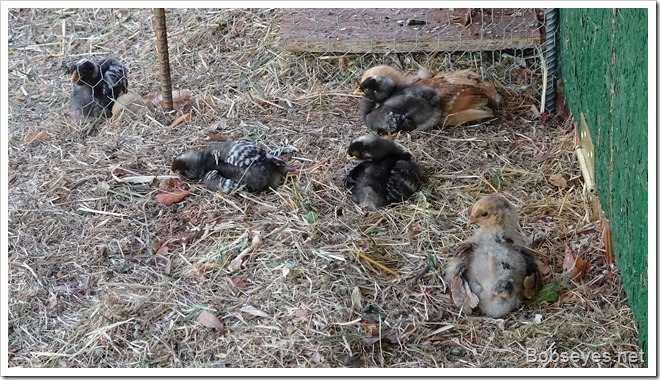 And even more of them piled in there for a noon break. 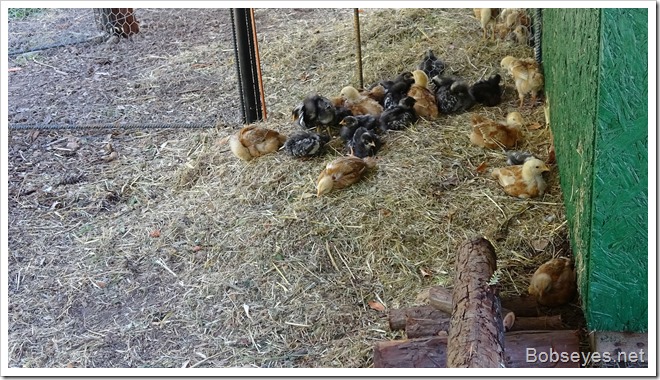 I’m sitting in my chair taking a break  myself and this is my view. 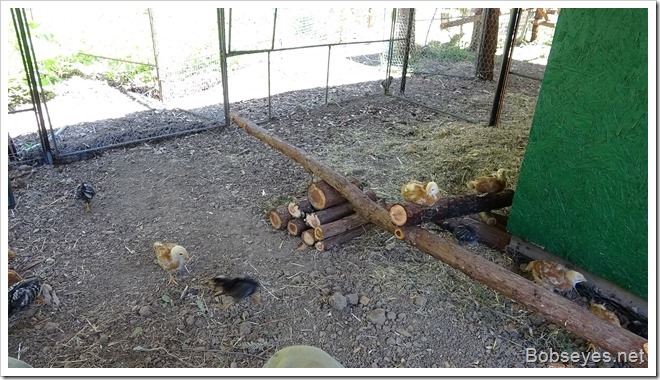 I worked some more prepping my van, checking the oil and water in the engine but forgot to check the tire pressures maybe I’ll get to that tomorrow.

I need a dill patch for pickles

I wanted to plant some dill seeds and I had a spot that gets water from the enclosure sprinkler, but in order to plant where I wanted to I first had to bury the six inches of wire that goes underground on that side of the enclosure. I have the ditch dug here and now need to bury the wire. 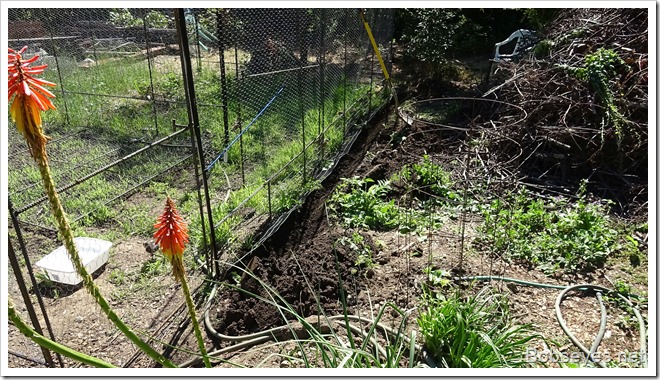 Shovel means worms to the chicks

All buried. The chicks saw the shovel and wanted worms, but there were none in this spot yet, so I’ll have to make it nicer for the worms with some mulch. You can see the little peeps on the other side of the wire peeping away, but no worms. 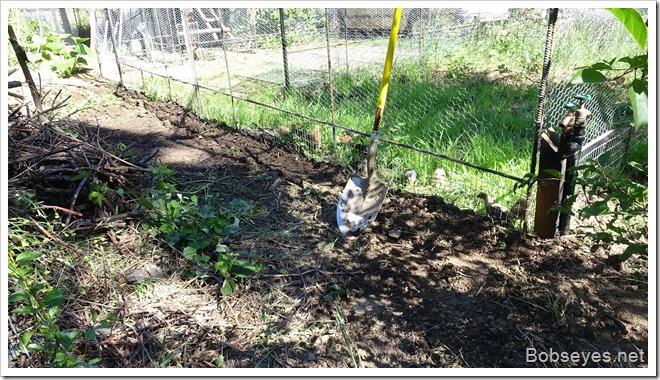 The shovel means worms to the peeps. They train easily and really like worms 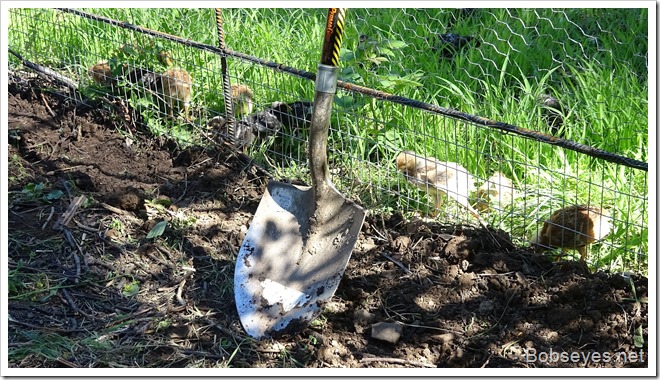 The ground needed tilling for planting

Once I had the wire buried I had to dig up the ground to plant the dill seed so I used the shovel and dug twice to break up the soil enough to plant the seed. 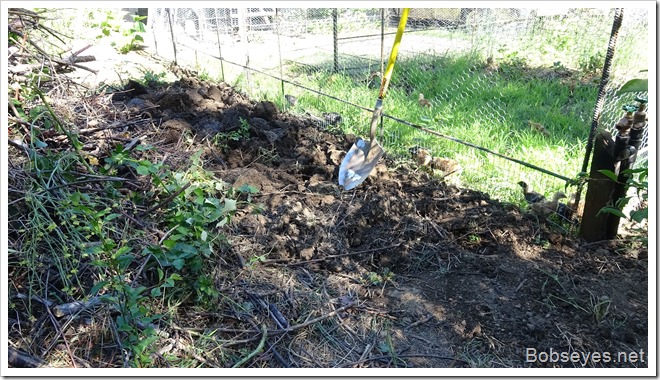 I set the sprinkler up on top of this enclosure as I  hadn’t done that yet. Here’s the sprinkler in action which over water’s onto the dill patch I just planted. 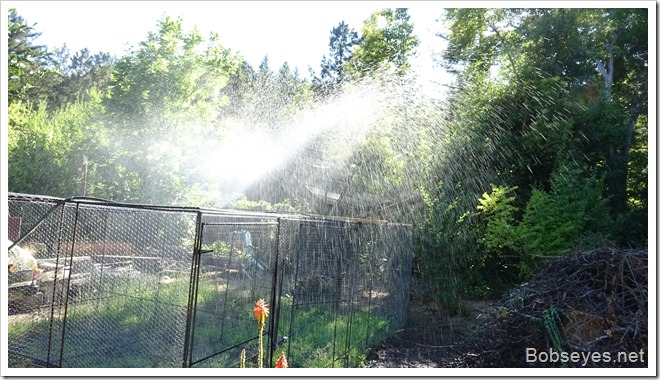 I spent most of the rest of the day puttering around the yard. I did plant some more tomato plants from my brother mostly for chicken feed later. I planted them here and there in the enclosures as I heard the chickens don’t like to eat the plants, so we’ll see if that is true.

1 Response to Peeps, Van Prep and Planting Some Dill Seed