Hiking in the Palm Canyon area in the KOFA

I’m back over at Marty’s place resting and catching up with things.

I wanted to say thanks to my commenters as I read every one of them. And I just wanted to say I appreciate them but I have a very hard time responding to them when I’m traveling as lots of times the Wi-Fi signal isn’t too good and I can barely check my email. Sometimes I will give an answer in a post if I think lots of people might be interested in the answer. It’s best not to ask too many questions, but whatever. They are also very timely and get lost in the past rather quickly.

Now where were we?

When Dan and I got it going the next day we headed south on 95 headed to the Palm Canyon area of the KOFA to do some hiking.

Dan hasn’t been in the area so he has to play tourist a bit so we stop at the information place on the way in so he can read the stuff there.

We are at the information spot here and headed in to the mountains ahead about five miles even though it only looks like about one mile. 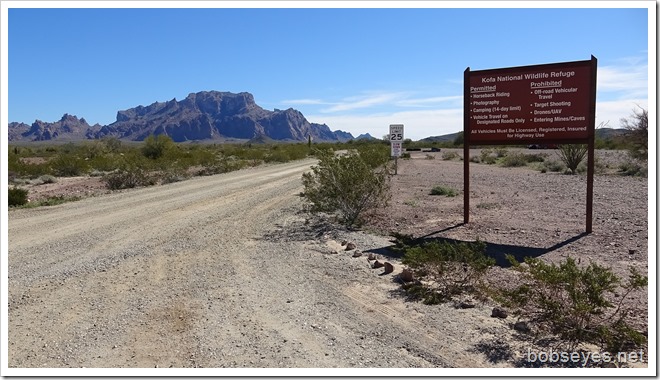 I told Dan earlier that except for around noon there wouldn’t be many people in the area and I was sure wrong. I finally figured out it was because of the weather change, every one was getting.

We pulled into the Palm Canyon Parking lot and stopped to wait for a bunch of guys to leave so we could get our camp spot which is the only flat spot up here. You are looking up Palm Canyon here where there’s an easy half mile trail up to what they call Palm Canyon. 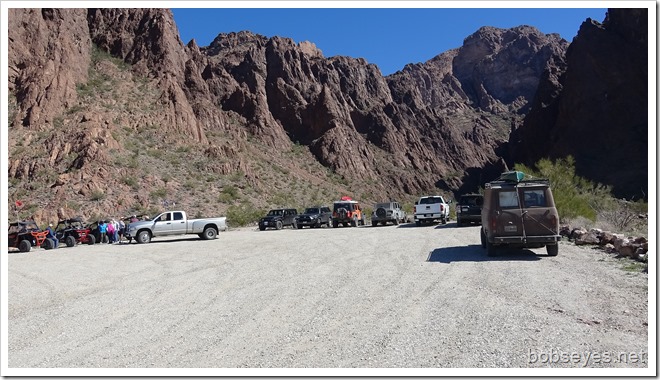 Since Dan was a tourist we had planned to go up the trail earlier but with all the people we waited until most of them left so we headed out around 6 PM up this way taking it easy around camp all day. 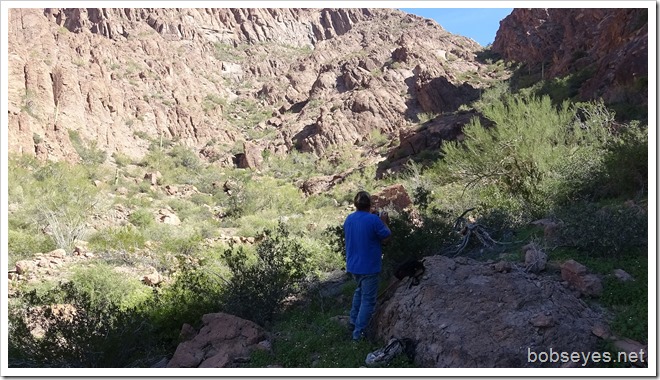 Here’s Dan where they have the Palms. He’s thinking disappointed thoughts as the palms are about six feet high and up in a crevasse that is in the shade right now and there’s only a few of them. What’s here is not what most people imagine before getting here. But it’s still a nice little walk. 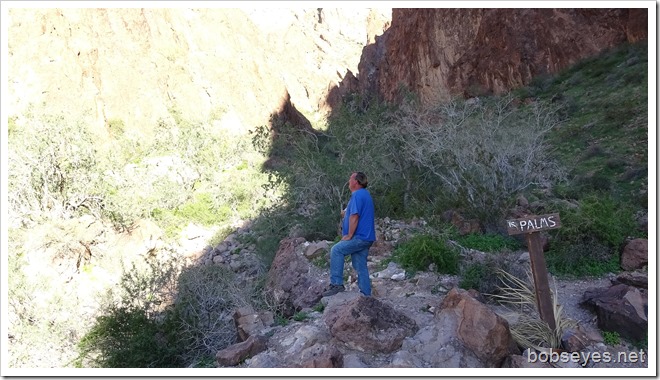 Here we are getting back to our camp spot in the Palm Canyon parking lot. I like this spot because it looks out over the  lower area coming in. 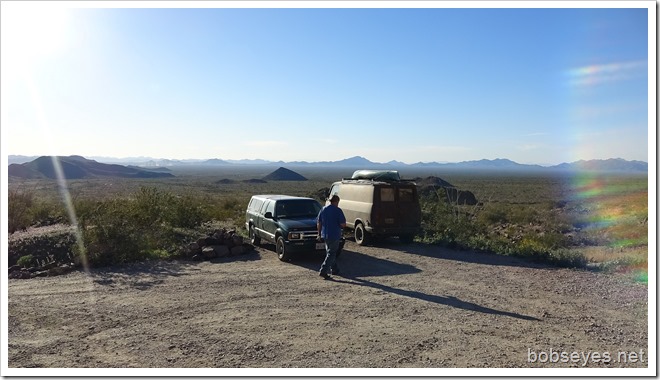 Need to get into shape

I had another reason to go on that little walk as both Dan and I are out of shape pretty bad as we haven’t been doing much walking. And I had a big hike planned if we could get in shape so we needed to work at it and hikes were planned for that purpose. We did have one little problem and that was Dan had to be back home sooner than expected so we didn’t have the proper resting time between hikes taking it easy so our muscles would adjust for where we intended to do.

Anyway the  next morning I opened my van doors to this site just outside my doors. 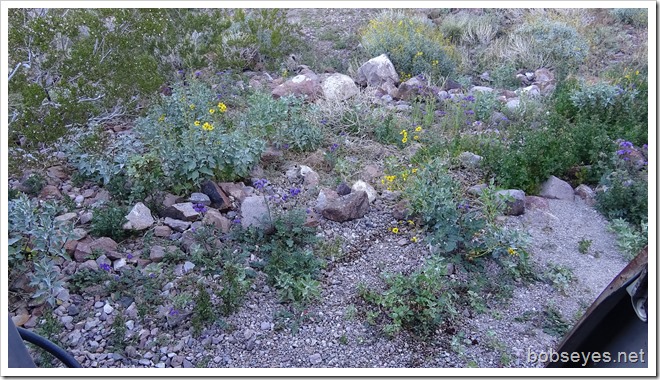 With all the recent rains very much above normal things were very lush and starting to bloom.

We took our time getting it together this morning and then set off in the direction of Old Palm Canyon which I’d hiked to last year and remembered as a real interesting canyon. I was only able to hike to it’s base last year as by the time I hiked to it’s base I didn’t have the energy I used to  have to climb up it and check it out. But I did remember that this canyon looked a lot nicer than what I saw in Palm Canyon and had the potential to be quite a bit better than Palm Canyon which I think would best be called Disappointment Canyon.

We headed out leaving the parking lot off to the right facing it. Every thing was lush and bulging with water, especially the cholla cactus.

Here’s Dan which I was following. The trail comes and goes. Lots of stepping on rocks and stuff while avoiding the sharp stuff. This kind of walking is good for older folk as it uses all the muscles so is good to improve balance which becomes a problem with aging. We got a lot of improvement before the day was done.  Dan’s checking out that barrel cactus and we are headed around that mountain. 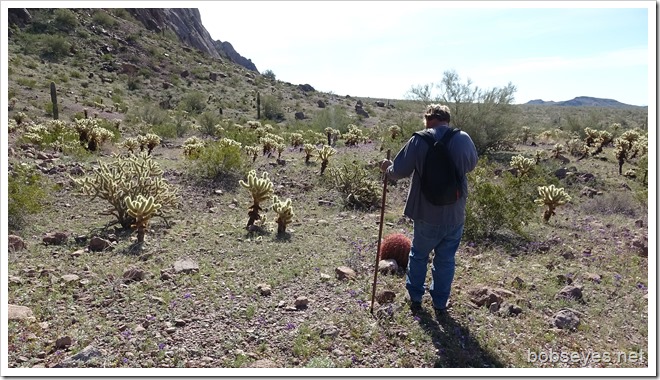 We walked as the things in our surrounding changed. 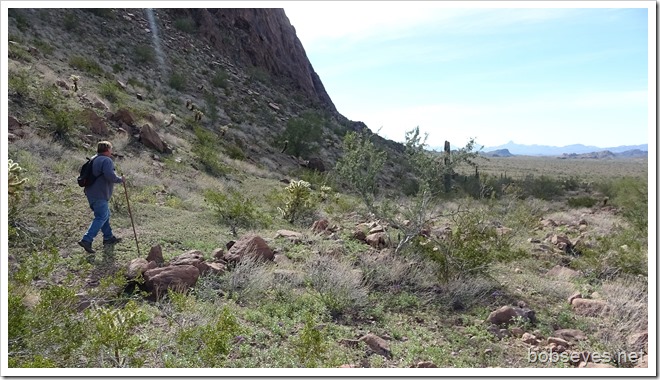 These little flowers are hard to see in the photo but there were places were they were thick. They really hug the ground like many of the desert flowers. 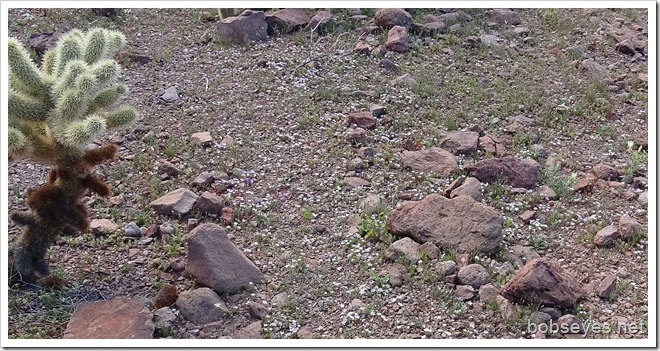 Every thing has thorns

Sometimes we had to find a way through the bushes which most of them have some kind of thorns so a clear past through is most desirable. 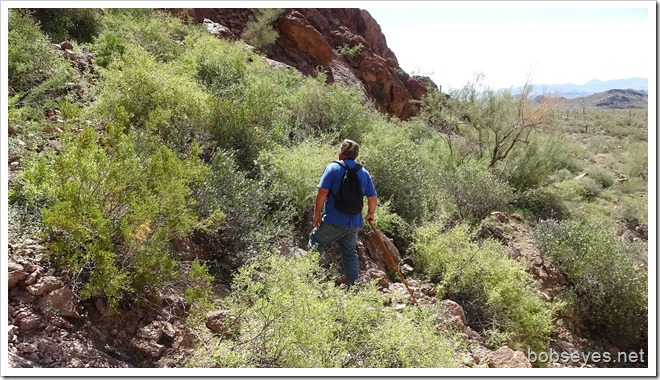 If we had a trail this is one of the better parts but we really didn’t need a trail but it would of made the going a lot easier. 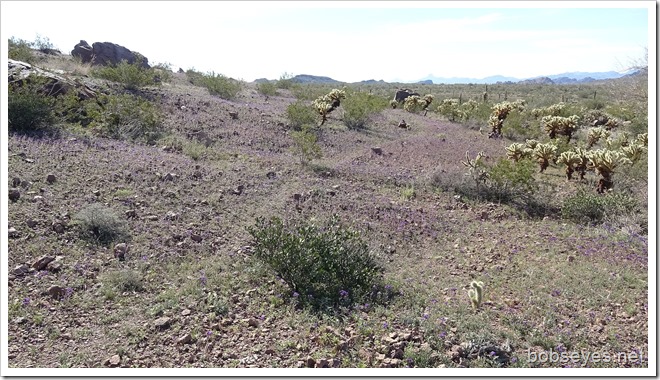 We went by some and through some big rocks on the way headed around the mountain. 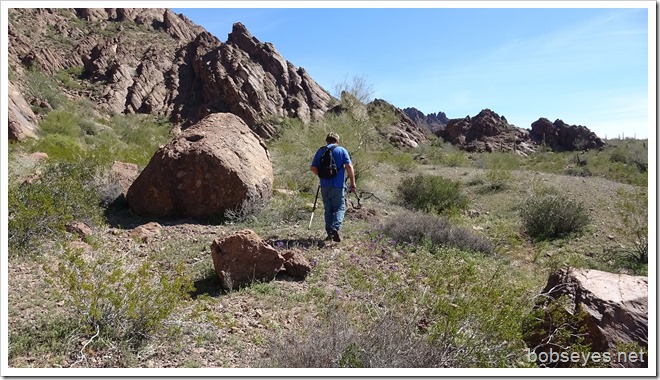 I’m  not sure what the miles were but we were getting tired and getting our exercise going through this spot. 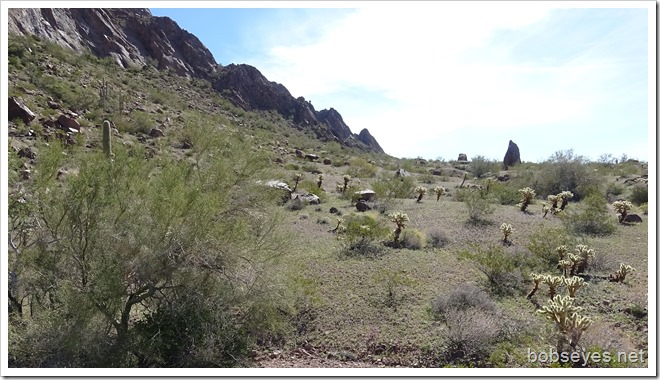 We were pooping out when we got to what I thought I remembered as Old Palm Canyon. 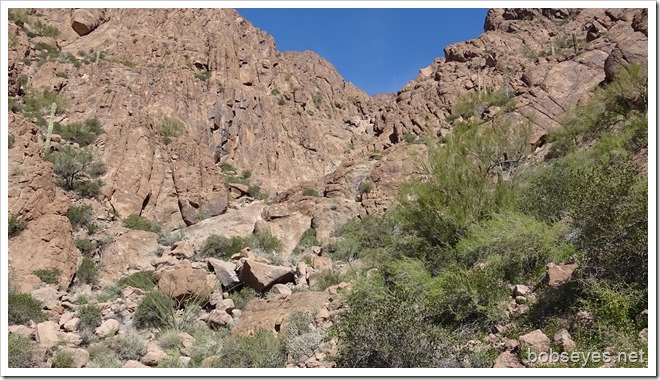 But looking at this canyon I realized this wasn’t it. This was only the second canyon and the one I wanted was the third canyon a bit further yet and we were already beat.

Old Palm Canyon up ahead

We walked just a bit more so I could get a  look at Old Palm Canyon just to see. 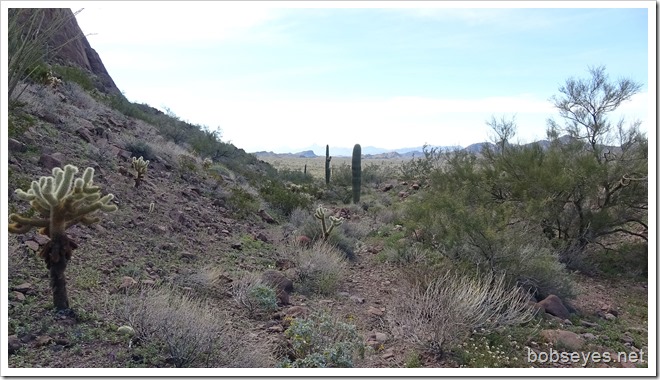 Didn’t quite make it

I had walked to the bottom of it last year when I was in much better shape. This year I wasn’t going to get to it’s base and hike up a bit but that was ok with me. So far this had been a fantastic hike with nice weather and lush desert, the best.

It’s hard to see, but up ahead the mountains change to sharp pointed peeks and that is where Old Palm Canyon is and I suspect it’s not disappointing like the new Palm Canyon. 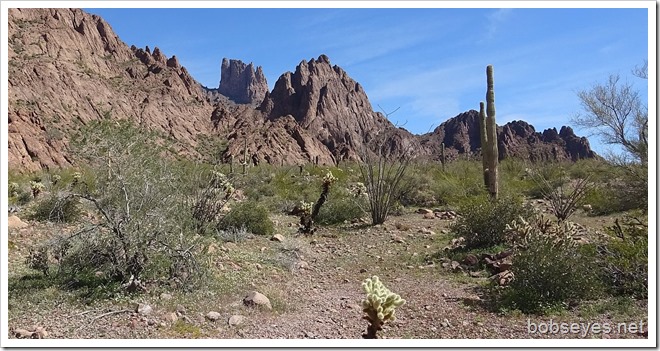 But the distance was just too far and we’ll never know for now.

Break before starting back

We found some shade and had a bit of a rest before starting back. Dan said he wanted to go wide as to hike a different trail than  the one we came out on which is the way I’d do it too so I followed him pretty beat but not as beat as when we got back which was still quite a ways.

Starting back, look at the cactus we have to go through. Like mine fields. 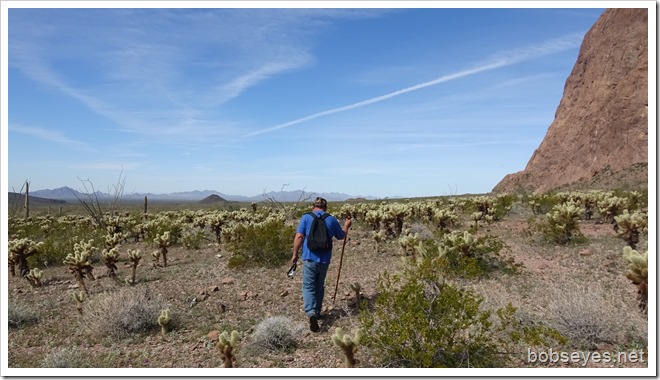 The teddy bear cactus was real lush and it got me three times. The first time it got me on the bottom of my left foot and on my right leg chin. We were lucky to find some shade under a tree and I dropped my pants and took off my shoe to extract the thorns. Ouch.

I found that the rocks had worn a hole in the bottom of my shoe and the cactus got me there.

I hiked a bit further a bit tired out and this one jumped on me when I barely got close to it. I was amazed how easily it broke off and got me right were the other one got me earlier in the chin. That sucker is about four inches long. 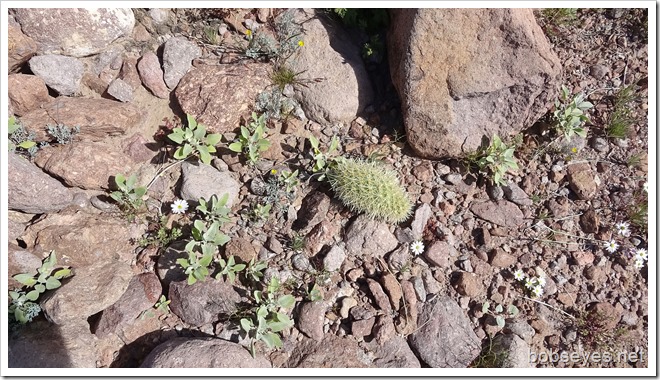 I found a stick to get this big thing off and dropped my pants again and got all the needles out and continued on.

That big rock up ahead is where our camp was and we were looking forward to getting there. 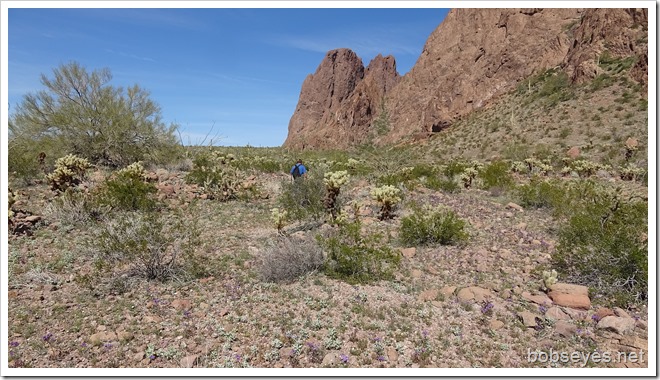 Both Dan and I were pretty beat with sore wobbly legs but we both agreed we had a great day hiking in the desert with great conditions as far as weather and the lushness of everything and we did get some much needed exercise.

We relaxed a bit and then moved to our next camp spot which is at the other parking lot on the way to Queen’s Canyon not far from this same area.

We had to drive five miles back down the road and turn onto the Queen’s canyon road for five miles to the parking lot.

Now Dan’s truck is not four wheel drive so I advised to go until things got too bad and stop and we’ll camp.

He did real good but when he caught up with me not far from the parking lot we were headed for to camp he got out and said he wouldn’t do it again as his truck wasn’t meant for this kind of stuff and I understood perfectly, but was impressed he made it this far.

I said we’ll camp here so park your truck and jump in my van and we’ll check out the parking lot which is just up ahead a few hundred yards. The short road up to the lot is rather steep and was torn up by the two wheel drives tearing it up and was like mogul’s.

Even I had a hard time driving through them with my four wheel drive, real bumpy.

I showed Dan the road we take tomorrow in my van for our hike into Queen’s Canyon which one should have a four wheel drive to enter.

We drove on back to the camp spot and set up camp for the night. 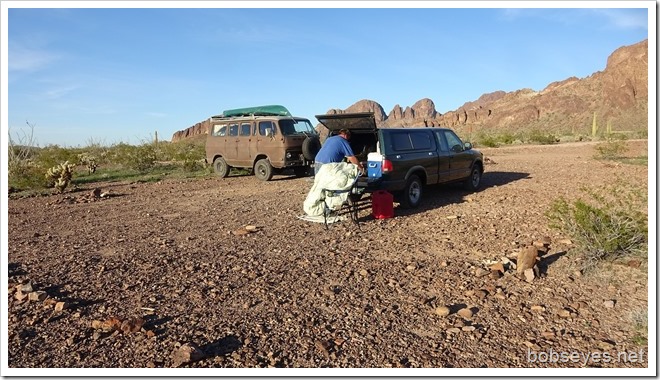 Our legs were hurting pretty good so we’ll see how they feel in the morning to see what we can do as far as hiking.

I will hint that the California Poppies were spectacular on tomorrow’s hike.