Paddling Monte Rio To Moscow Pool Looking For Salmon, But Didn’t See Any

Today seemed like a good day to do a paddle. I could see the wind was up a bit at Jenner so headed down to Monte Rio where I knew the wind would be less.

The salmon have been coming up the river since about the first of August so I thought I’d have a look and see if I could spot any especially down by the Moscow Pool where I was headed, down river.

I stopped at the auto parts store in Monte Rio on the way down to see about finding some fittings to get my new master cylinder for my Toyota to work. They didn’t have what I needed so I’m going to have to work on that one.

Boat’s on the water

I continued on to the Monte Rio boat ramp and put my boat in the water and headed down river taking my time moving along. 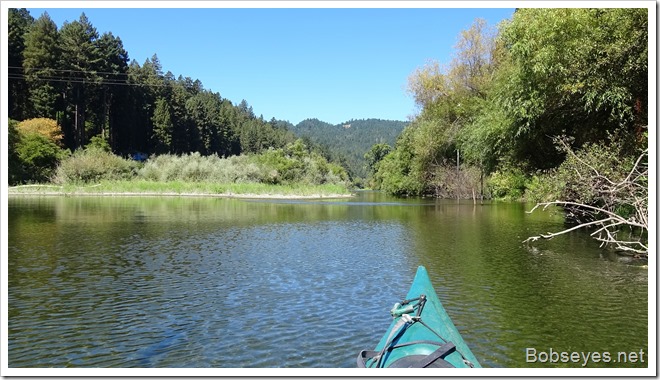 I paddled on down to the Villa Grande hole and stopped here by these ducks for a bit of a break. 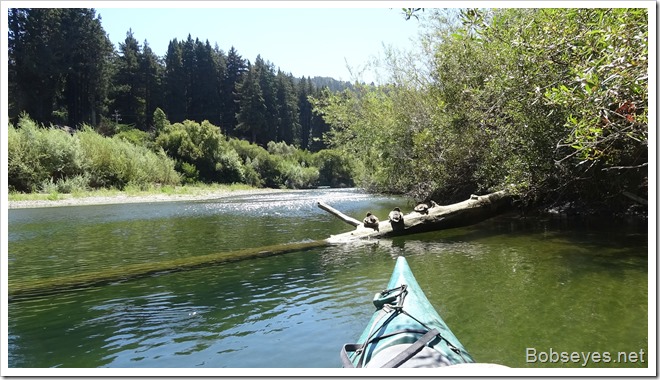 A bit of wind but not bad

It was a little windier below there as I moved on down the river and stopped at this spot for a bit. 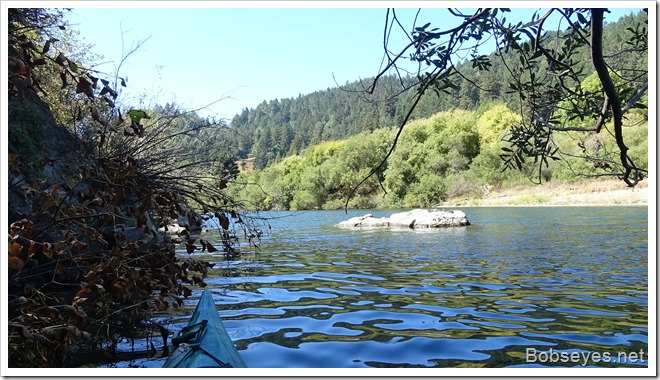 As I continued on I went by this turtle getting some sun. It was a big one. 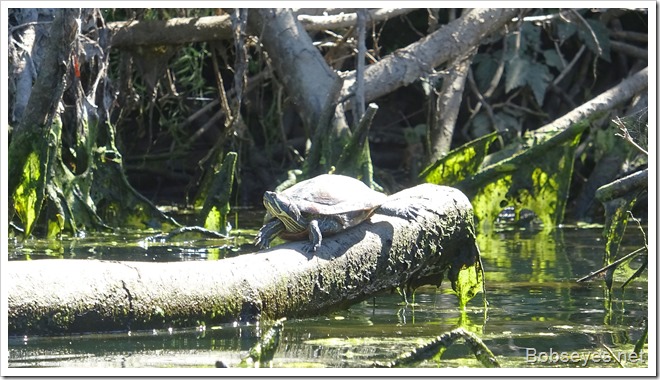 Here I am just above Moscow Pool. Here’s where I was hoping to find some salmon if I was to find any, but I didn’t. 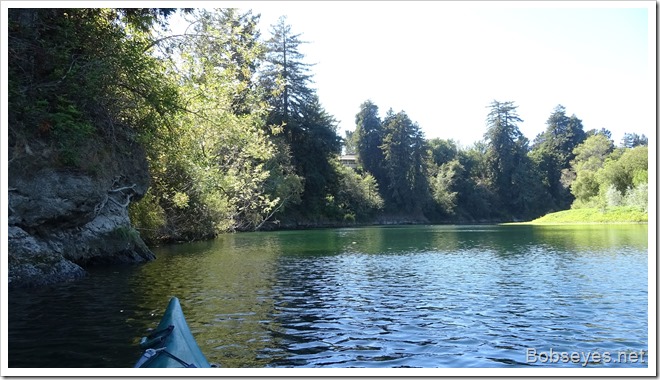 I did spot these wood ducks hiding in the bushes as I went by. 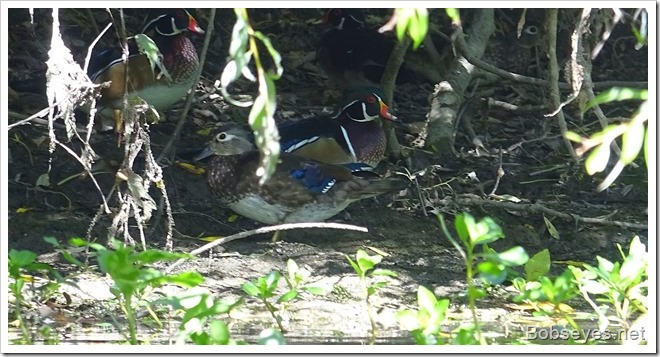 Rein’s beach is on the lower side of Moscow pool in the sand here. I paddled by it and turned back up river to paddle around the edge of Moscow Pool which is to the left and back up. There’s an egret there on the right. 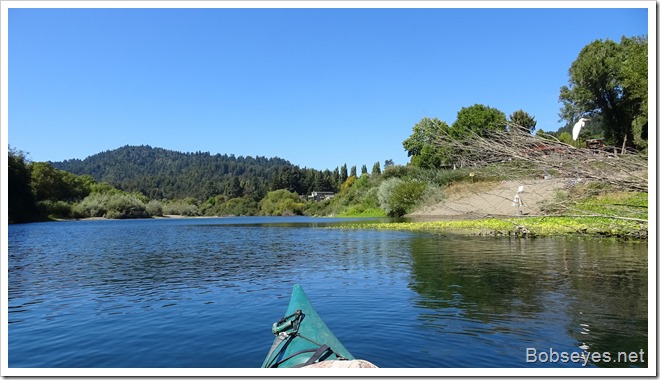 The egret I went by just sat there. 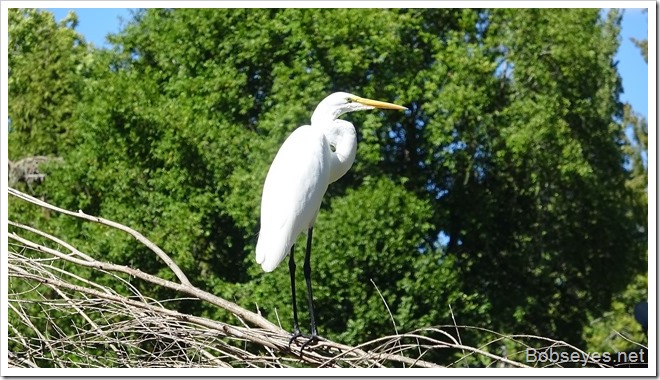 I saw this cormorant up in the trees and went around it as when they get nervous and are thinking of flying off, they poop and you don’t want to be under them when that happens. And yes it did poop, but not on me. 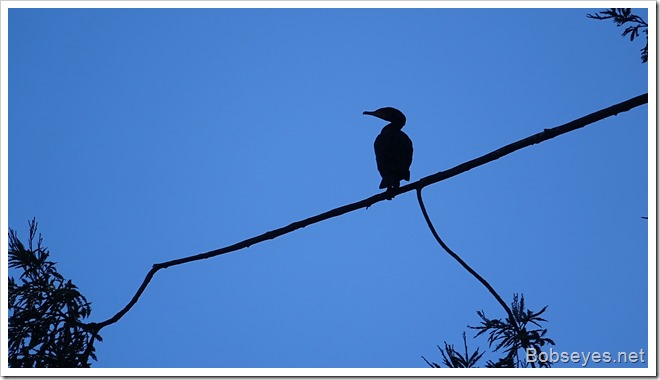 Here I am on the edge of Moscow pool and shortly will start paddling back up the river which is were you are looking. 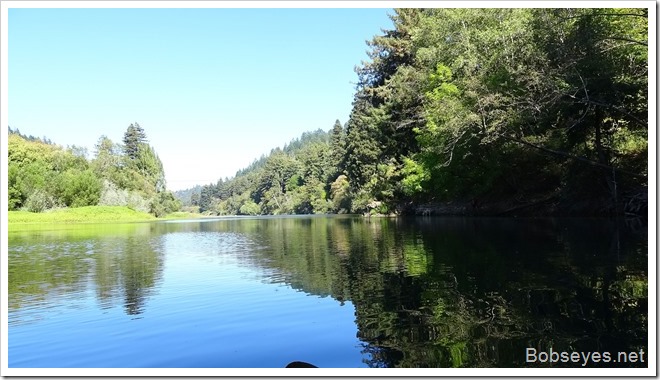 While I was here I saw a harbor seal swim by which usually means there are some big fish in the water and they are looking for them.

I took my time paddling back up the river. It was about 5 when I went by these guys working away on putting some big rocks in this section as some of it got washed out last winter. 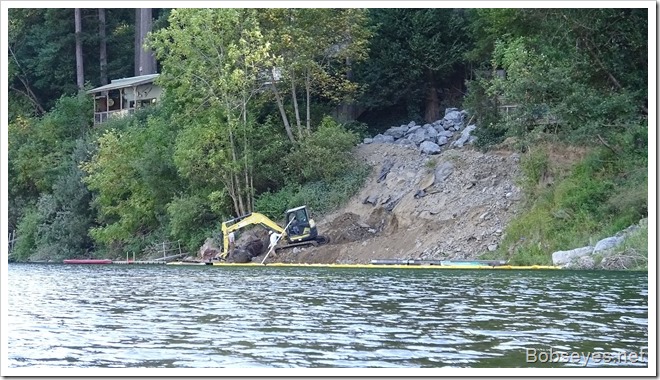 They are trying to move this big redwood log into place, but it’s really too heavy for that little machine to lift, but they kept working on it and I think they got it in place. 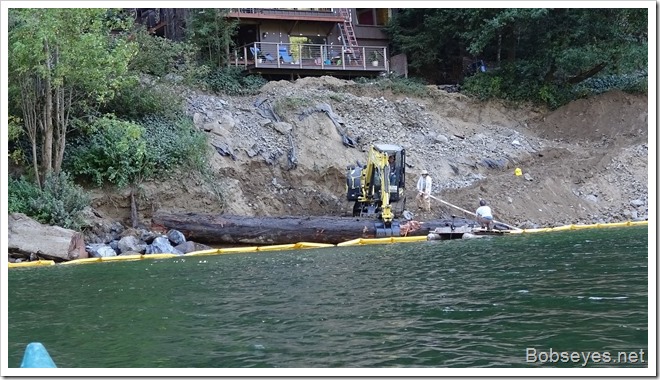 The wind had died down as I paddled up just below Monte Rio. 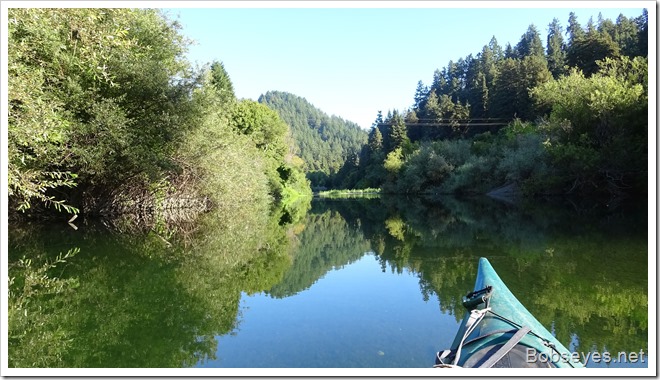 Here I am at Monte Rio. There’s the bridge and the boat ramp where I’m headed to take my boat out. 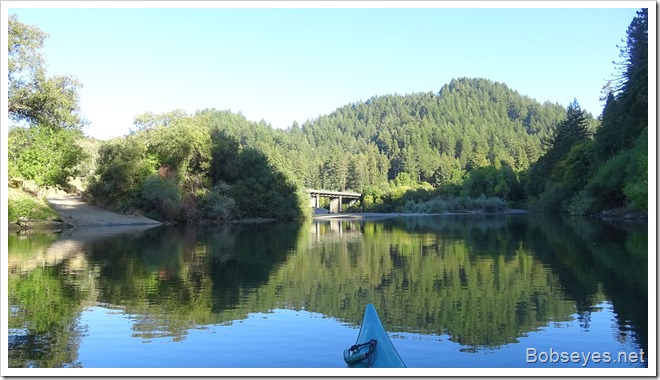 I loaded up and drove on home.

After a break at home I fed and watered the chickens and made some plans for some shopping tomorrow.