Paddling Jenner, But Didn’t Expect It to Rain

I didn’t even think of the rain pants

It was overcast at Jenner when I arrived this morning and I didn’t even think of putting on my rain pants, but I should have.

I put  my boat in the water and paddled across to Penny Island. I wasn’t sure which way to go today. The light wind was blowing down river which is unusual as it usually blows up the river most of the time. So, it looked like there was less wind down by the mouth so I started paddling along the edge of the island down river which looked like this. 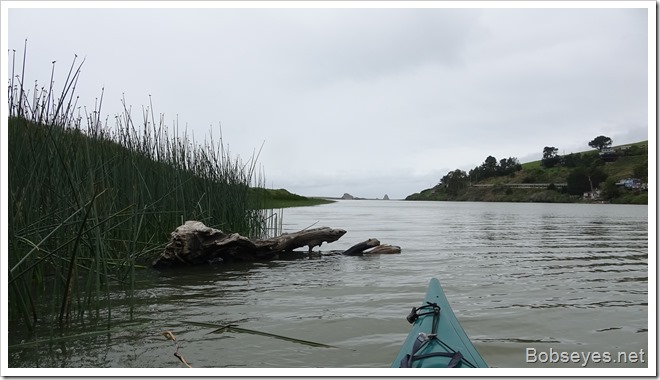 I paddled on down to the lower end of the island where it started to mist a little. 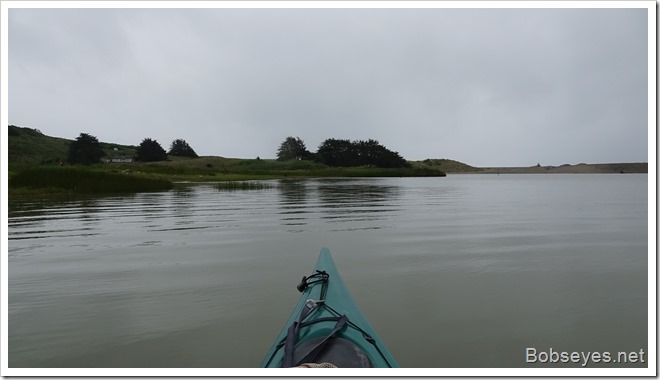 About this time I thought I should of put my rain pants on, but too late  now.

Some terns were resting on the lower end of the island as I passed on by. 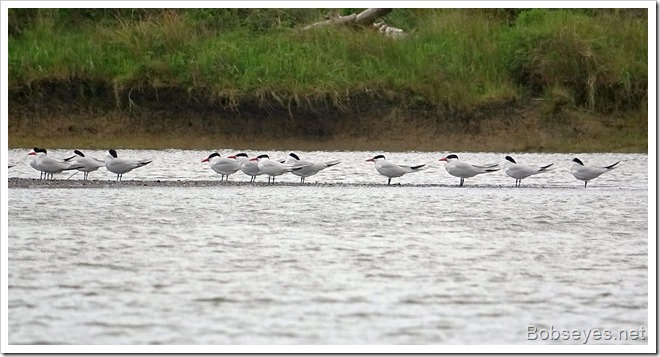 Showers while paddling across

I took a couple real light showers on the way across to the river’s mouth area, but not enough to get me wet. I did have my wind breaker on which is a light rain jacket. 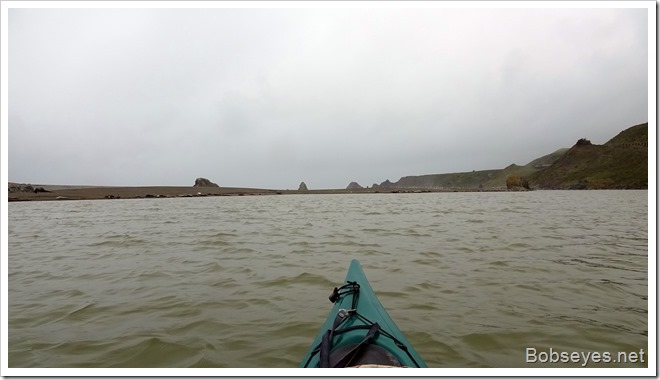 I approached the area where a bunch of harbor seals were resting on the beach and some seagulls had just jumped into the air as something spooked them. 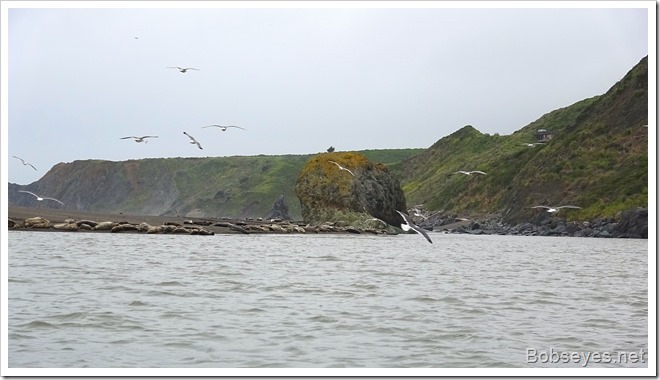 I had to paddle by these cormorants on the rock and most of them flew off, except one. 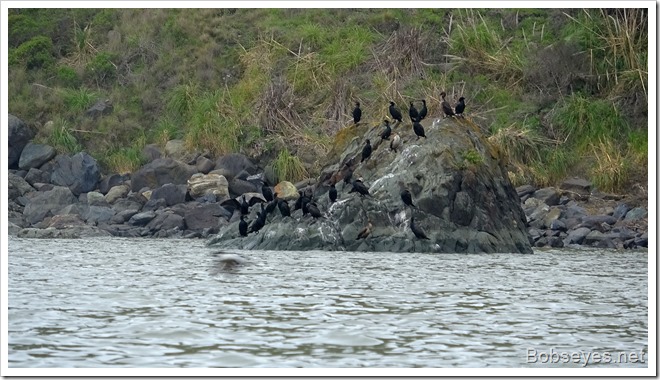 I made it to this spot by the open river’s mouth looking out into the Pacific Ocean. 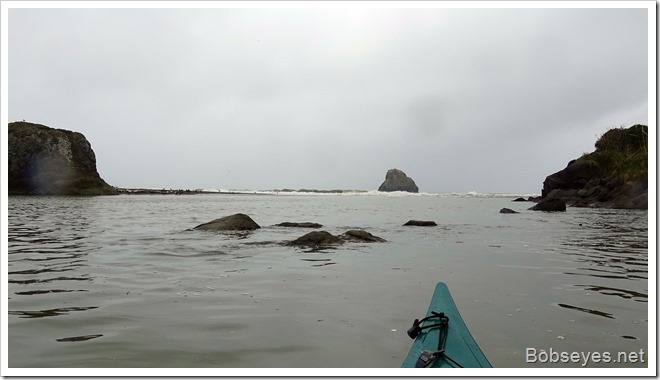 I sat in that spot and looked around to see what was going on.

Some harbor seals were resting on the beach in front of me. 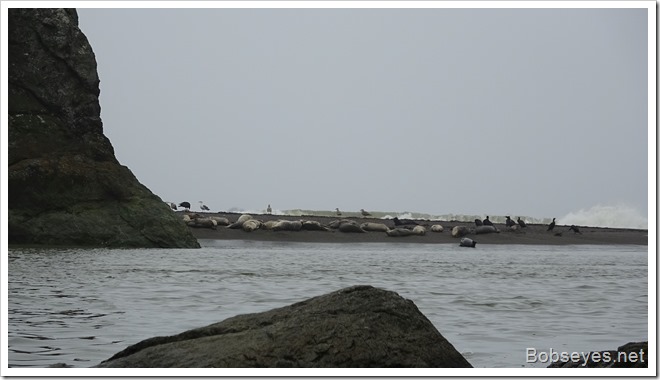 And some cormorants too. 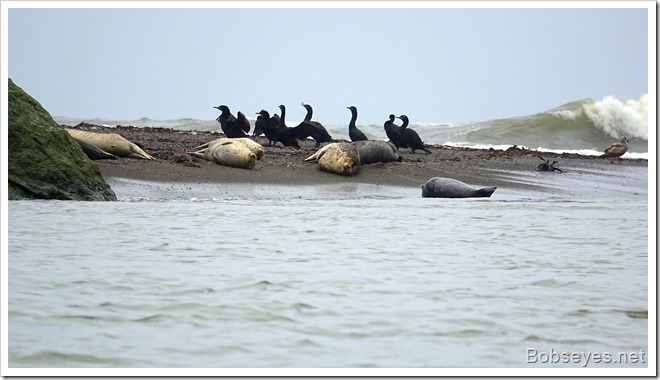 I better be heading on in

I hung out there for about a half hour as more small showers hit me. They were real light, but enough of them start to add up and I was thinking I better start back before something bigger and longer lasting hits me, so I started heading back. I looked for a tree to pull under but there aren’t many trees overhanging the river in this area, but I still looked for places to get out of the showers every time one hit me. Lucky they were real light or I would have been drenched.

I pulled into this spot for a bit on the way in, but it didn’t provide much cover. 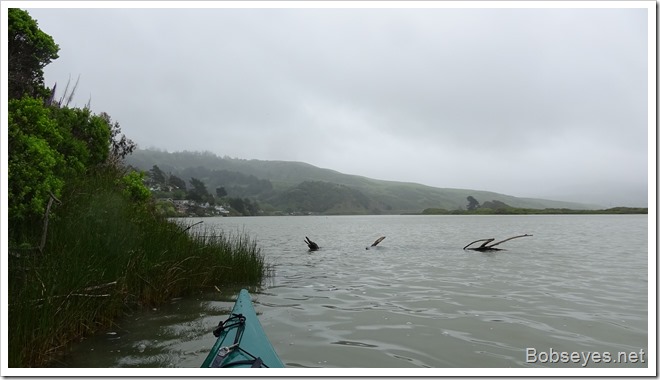 At least the winds were down

Lucky the winds stayed down below what was predicted.l They had predicted about 16 miles an hour winds, but they were less then five miles an hour.

But it was still misty with showers so I continued on in towards the boat ramp going by these nice looking flowers in their prime. I think they are called Red Hot Pokers. 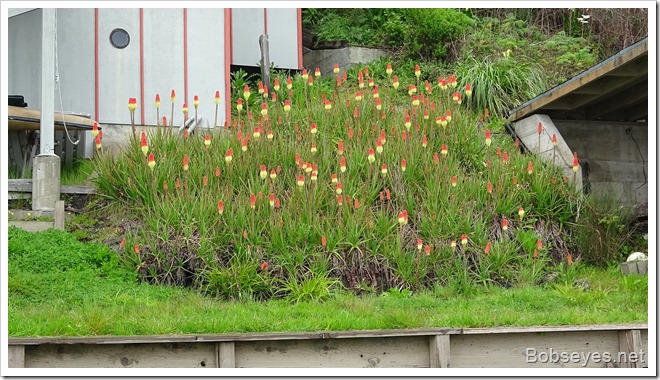 Too late for a tree

When I was almost to the boat ramp I finally found a tree to pull under, but the current in the area kept pulling me back out into the river, so it wasn’t too good a spot either. 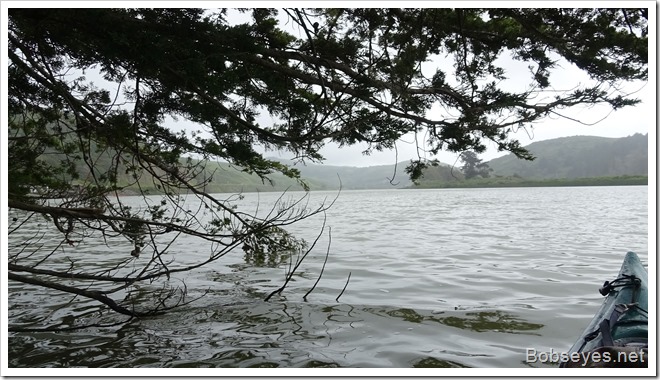 Since I was almost at the ramp, I gave up on the trees and went on in for the day, cutting it short.

I pulled my boat out of the water and drove on home where it was raining and a bit on the cool side.

I went in the house and started the heat and that was my day.

2 Responses to Paddling Jenner, But Didn’t Expect It to Rain