The wind was predicted to be around nine miles an hour down at Jenner today, so I drove on down for a  paddle. Being Sunday there were quite a few people at Jenner. I slipped through the people and got my boat in the water  and somehow even found a parking spot in the parking lot.

Here’s the hawk taking off. It looks like some kind of kite hawk. 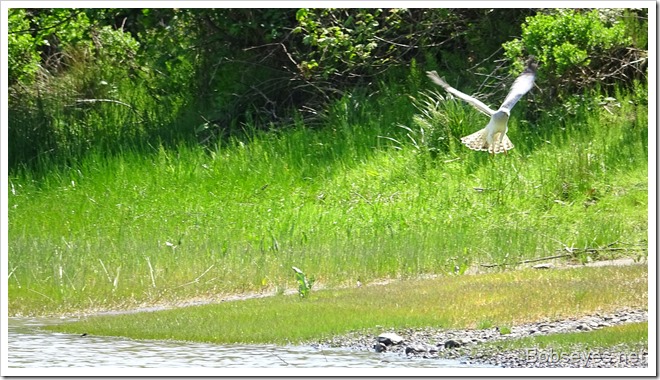 I started up the river when I was surprised to see the hawk come back to the same spot and land again. It seemed to be eating something but I couldn’t tell what. 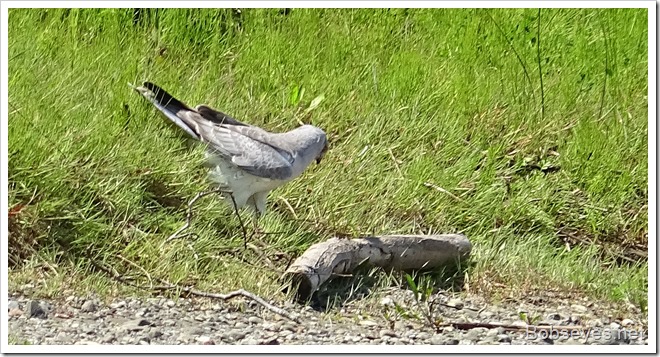 I continued on up along that side of the river going by here. The wind was down to a breeze as I paddled along. 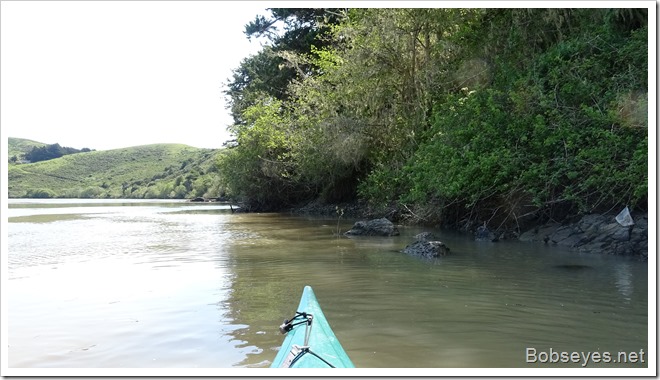 About three quarters of a mile up the river is a rock called Buzzard Rock which looks like this. 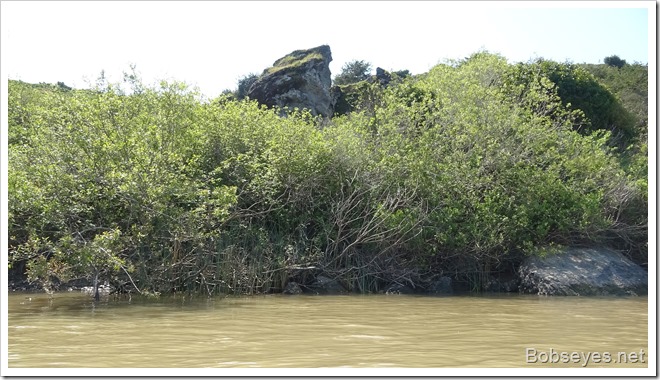 Several years ago I discovered there was a turkey vulture nest just under that big rock so I wanted to land my boat and hike up to the rock to see if they were nesting in this nest this year. The rock isn’t very far off the river, but getting to it isn’t so easy through the dense brush which includes, poison oak, nettles and berry vines, including wild rose vines which have sharp thorns.

I landed here, just under the rock. 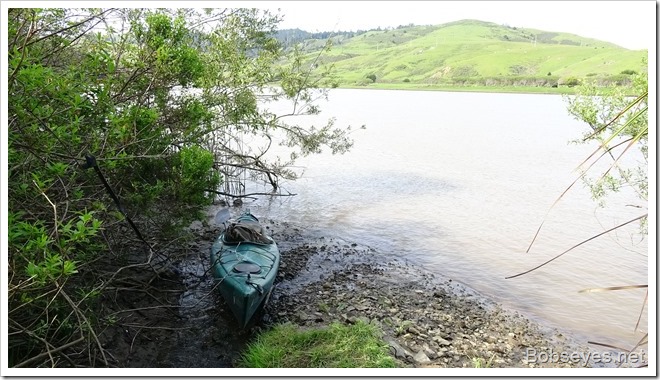 There are some overgrown animal trails up to the rock and if you know where to go, with some effort, one can hike up to the top of the rock and look down and that was what I wanted to do.

This is what part of the trail looked like with all the spring growth. 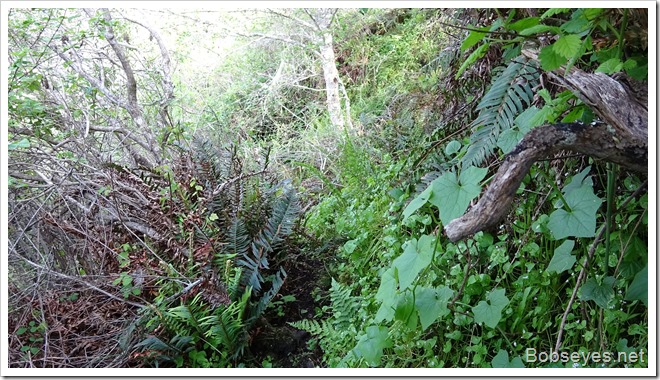 I came up behind the rock which is the one you see in this picture looking down river. 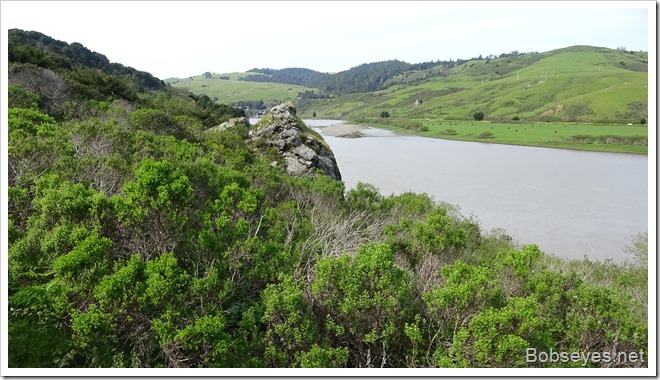 As I made it to the top of the rock, this is what it looked like. 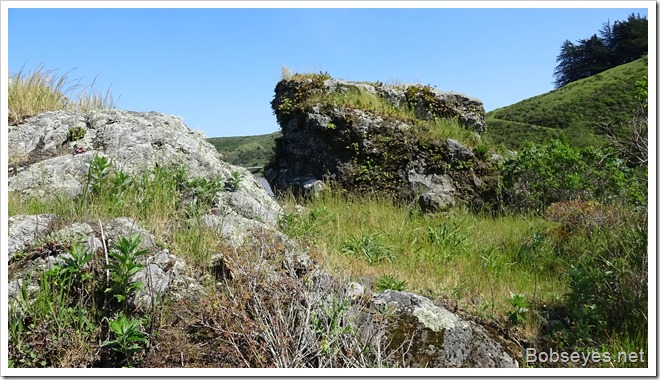 Views from the rock

Looking up the river from the rock top. 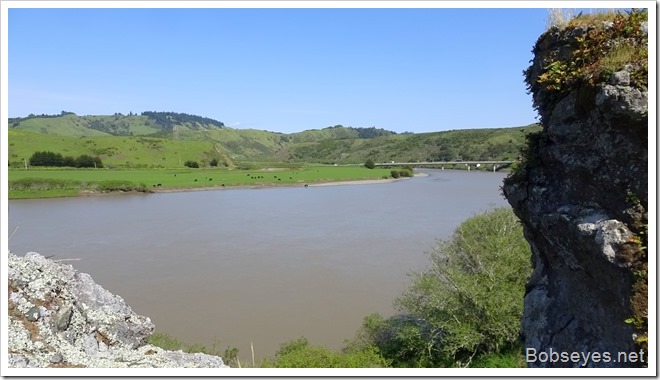 And looking down the river from the rock top. 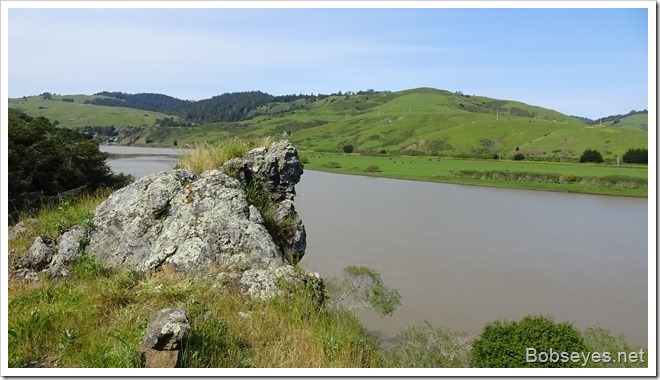 Checking out the Turkey vulture nest

I looked over the edge of the rock to see if the turkey vulture nest was active, but it didn’t look like it was which didn’t surprise me as last year they lost one of the two chicks at this nest. The problem with this nest is it’s right above a place the river otters like to nap and overnight and I think an otter killed the chick last year. There’s another nest higher on the hill  not far from this spot I’ll have to hike up to and check it out soon.

Stepping on the nettles

After a bit I started back down taking another trail. I went through these nettles, stepping on them to knock them back so they didn’t get me. Not a short pants area. 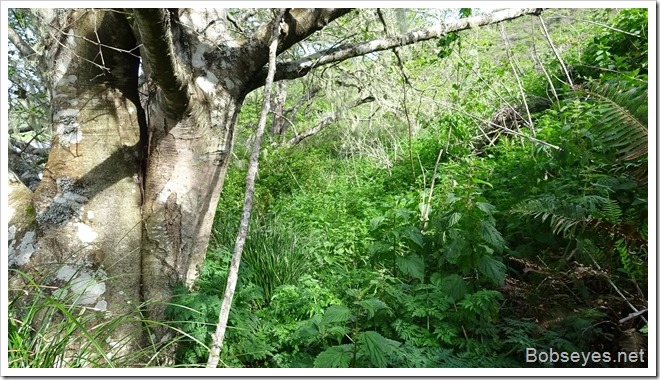 My boat was still there so I hopped in and paddled across the river to look for birds. I went by this duck which looks like it might a a shovel bill. 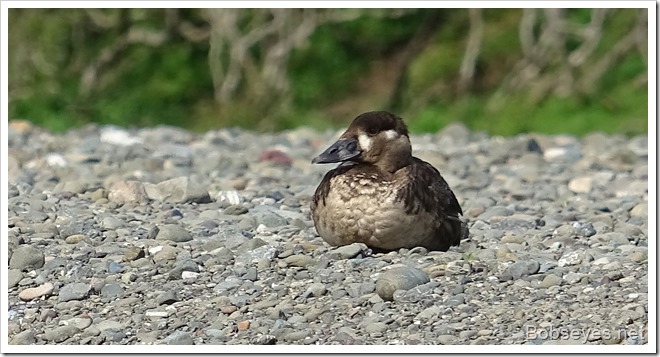 I hear the seal pups are popping

I headed on back down the river and thought about paddling down to the river’s mouth area. Some ladies I talked to at the ramp when I put in said the seal pups where showing up now, but I thought I’d keep that for another day so didn’t go down to the mouth but hit the ramp and went on home for the day.

I sat around the yard for a bit and decided to install the anchor stakes to hold my garden enclosure from going sideways as I put dirt into it.

I drove the metal stake in using the hammer to keep the side from moving outward from the dirt on the inside. 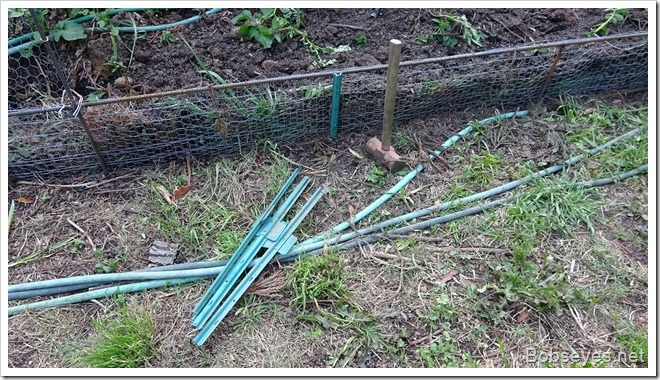 I also shoveled more dirt into the enclosure and still have more of that to do. 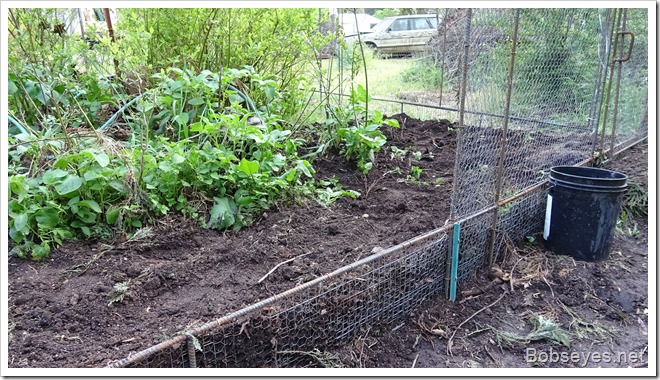 The rest of the day,  I sat around the yard taking it easy and enjoying the day.