I thought today was Monday, but I see it’s Sunday. Oh well, doesn’t matter too much.

The sun was out and the wind was down as I put my boat in the water at Jenner around noon.

It was high tide and the river was backed up pretty good so there wasn’t much current as I headed on up the river on the south shoreline along here. 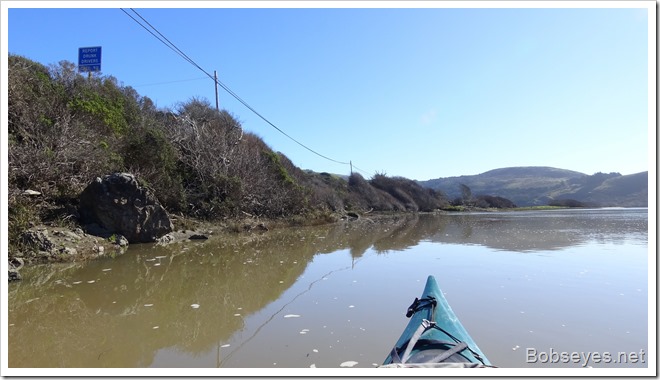 Up along the north shore

I don’t usually paddle up this side, but sometimes I come back along this route, but today I decided to go on up along this route to see what birds I could spot along the way. There’s usually quite a few birds along here, but to see them you have to get close otherwise it looks like there aren’t any birds along here as they blend in well.

Here’s a pair of mallards sleeping that I passed by. The mallard ducks seem to be more trusting than most ducks, however the male does have an eye open watching me as I pass. 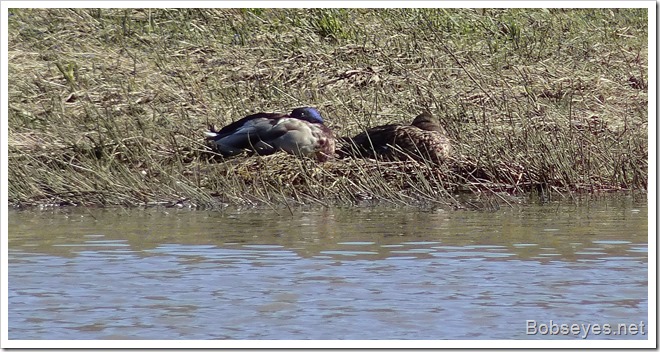 Just past the ducks, I passed by this egret and buffle head duck fishing. 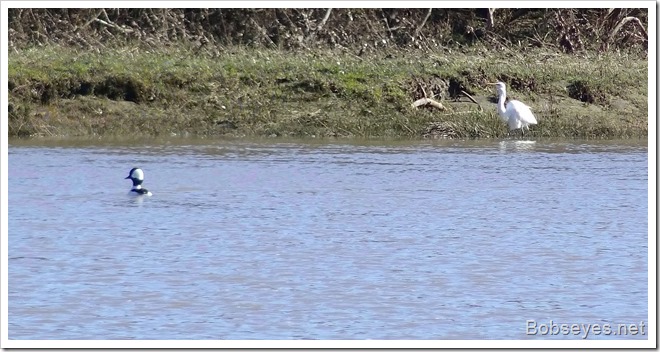 And by Paddy’s rock there were a bunch of ducks, most of them mergansers. I see a cormorant in there too. 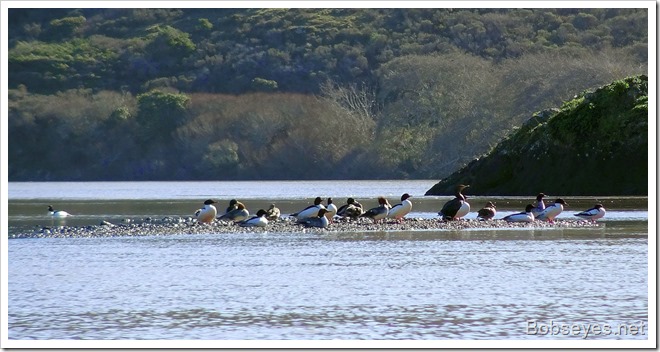 Going up the river

As I was paddling along here just below the highway one bridge at Bridge Haven, I was thinking I might paddle on up to what I call Seal Haven and then go over to Willow Creek and check that out as I hadn’t been there in quite some time. 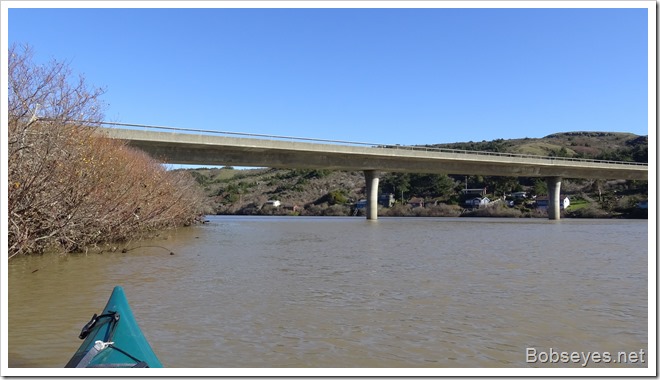 So off I went paddling along the shoreline, along here. Willow creek entrance is on the right, across the river but it’s hard to see. You almost just have to know it’s there to find it. 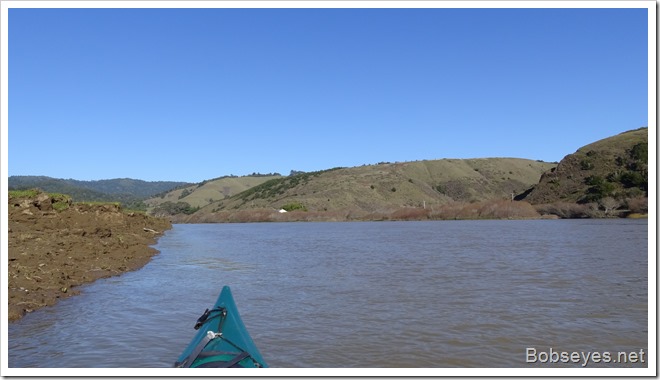 Paddled on in to Willow Creek

As I was paddling along just below Seal Haven, I noticed the logs the seals rest on were mostly under water right now so I veered over across the river to the Willow creek entrance and paddled on in.

It was real calm in there so I pulled into these grasses and sat and watched and rested. 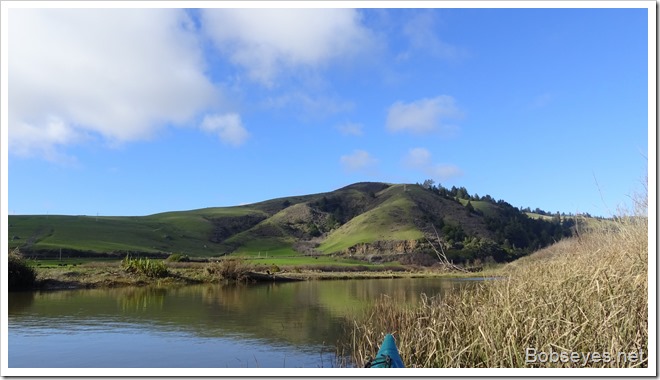 You can paddle into this creek for a quarter mile or so and this is what it looks like most of the way. This is actually at the end looking back. The creek keeps going, but it’s overgrown with willows, thus the name willow creek. 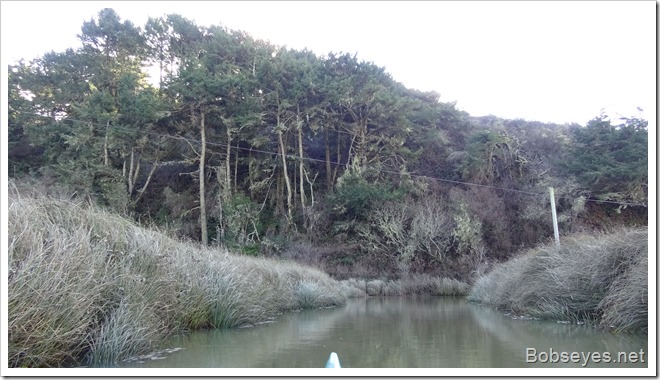 Willow creek would be a good place to start a family or two of beaver as it’s overgrown with willows which gives them lots of cover and they also like to eat the bark of the willow. It’s a good spot to start a seed family so they can spread out into the river’s water system.  Anyone got any beaver? :O)

I left the creek and started back down the river along it’s south bank paddling along here, actually I was drifting mostly as the current had picked up now as it was off high tide. 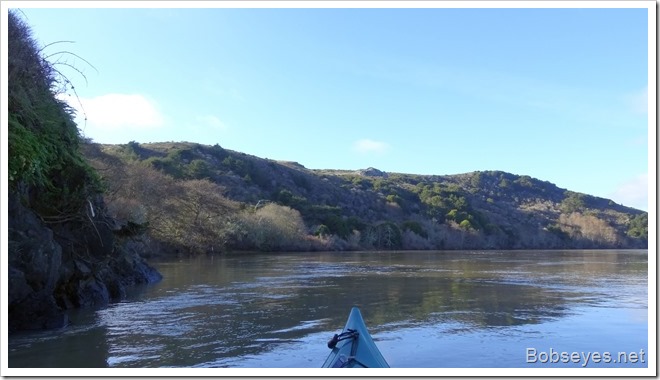 I went by these ducks. 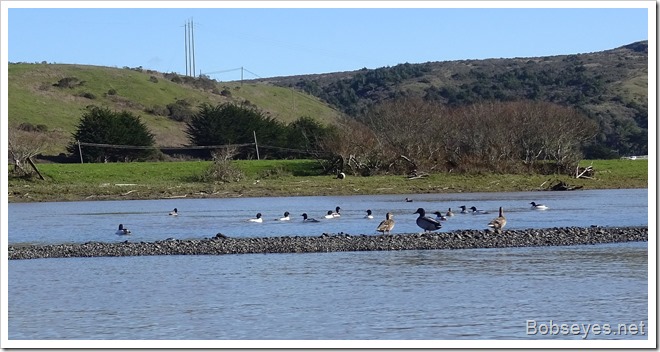 Ran into a bunch of feeding river otters

While paddling along just below Eagle’s Landing, I ran into some river otters feeding along the shoreline and heading down the river.

They spotted me, but were only a bit concerned. 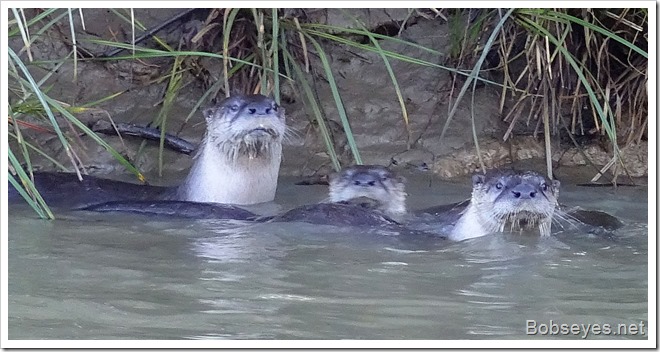 They all bunched up in front of me. No one in their right mind would mess with a pack of these and I wouldn’t. 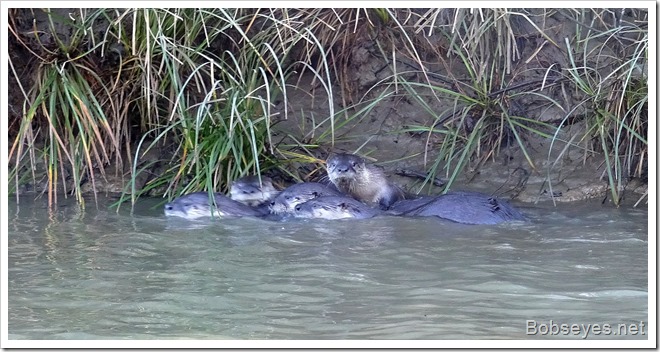 After a short powwow, They swam around my left and them around my back and headed on down the river feeding in the willows along the shoreline. 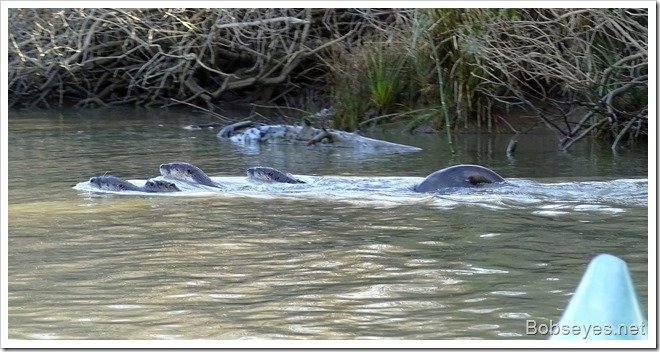 I left them at it and headed on in for the day. 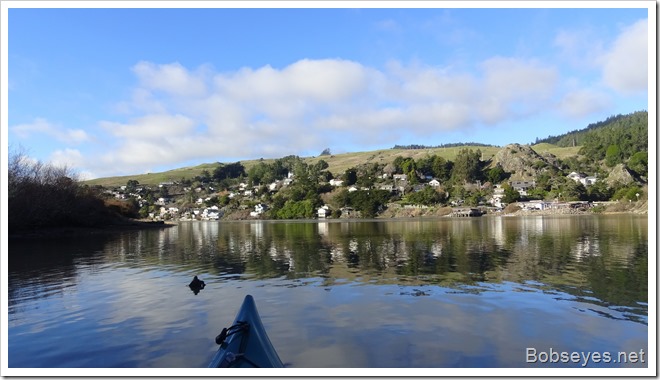 Helping  my neighbor with his hacked Facebook and Google accounts

Once the boat was on the car I was headed on home. I puttered around a bit in the yard and went over to the neighbors to get a dozen of my brother’s eggs. I also talked with the neighbor about his hacked Facebook and Google accounts. Since I’ve been studying up on making my blog site safe I learned some stuff  on how and what was needed to be done to recover those sites.

Use long passwords if you want to be safe

The number one thing a person can do to protect anything is to have a long password. It’s the number one easiest thing to make anything saver. Once your password gets over about eight figures, each new digit adds thousands of more possibilities of keeping anyone from guessing your password. Actually people don’t usually guess it, they have software designed to do that and it does it fairly fast unless you have a long password, then the time to crack it goes up exponentially and it could take days with a supper fast computer, so most can’t handle that and even if something could, that’s where a firewall comes into play as it restricts the number of times one can try to log in among other things.

So what to do so you can remember your password, eh?

Here’s one way. Take the password you are using now and double it.

Now it would be good to have some numbers in it, so maybe take your birthday year or some other year you like and add it to the end or the front of the password and double that.

So, let’s see. Say we  use something other than our name as that’s a no no.

They don’t like you to use words, but I don’t care as we messed the word up anyway.

So just for an example, let’s say we use apple for our normal password.

Double it to appleapple.

now add  a year you like like 67, double it and add it to the front or the back, we’ll take the front. Or you could put one on the front and one on the back, whatever works for you.

Now we need to do something we can remember, but really make it hard to find.

Put a symbol on the front and back, ones you can remember.

It’s also preferred that you use some capital letters too, but whatever, just get it long and that’s the most important part.

That’s the jest of it. I  highly recommend everyone go to a long password using some kind of method to remember it.

Hackers are starting to target your smartphones

Hackers are starting to target internet connected phones more, like smartphones, and once they get into your phone, they can get access to most of your stuff, so protect it. With high speed internet they can do a lot more faster these days and their software is getting better so this problem is going to get worse, unfortunately.

I also recommend finding some and running antivirus on the phone and firewall for ultimate protection.

I’ve done all these things to my blog site and now and I think it’s blocked pretty well to the bad guys.

Anyway, I’ve been spending a good deal of my evening time studying up on this stuff and applying steps to protect my blog site from the bad guys. I’ve also made some other changes here and there while I was at it.