Nice fall day at the river

The weather guy said it was going to be a nice day at the river, low wind which is always nice.

I was off and headed for Jenner around 11. It’s best not to get there too early like some people as the sun warms up the day and it’s just that much nicer. A lot of people go in the earlier morning to avoid the wind and are out of there around noon so that’s another reason to not got too early, although there just aren’t that many people down here boating this time of year.

Talked with John the trash guy

John the main trash picker upper around here caught me at the boat ramp. He’d just had his third pace maker installed and was finally able to walk down to the ramp from his house which is down by the river’s mouth.

We shot the bull for quite some time and talked about the Rivers Edge people messing up the boat ramp area with trash. He says they make a big mess because to load the canoes they turn them upside down and stuff falls out of them, called trash. That’d all be ok if they’d just cleanup after themselves like a responsible outdoors type of company should.

I was rearing to get out on the water but John wanted to shoot the bull so it was awhile before I could extract myself and paddle on over to the upper end of Penny Island.

I paddled on over to those little islands and sat and watched for a good while enjoying the nice day. 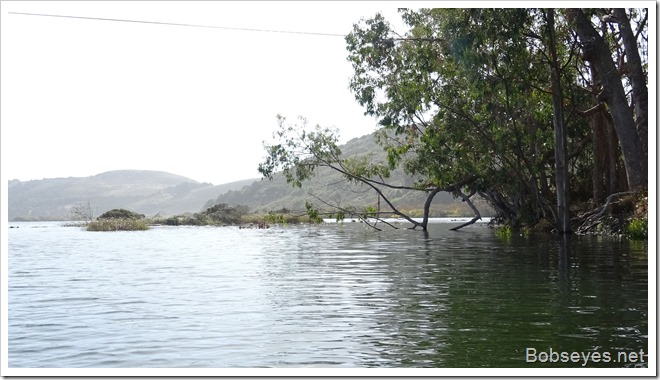 Eventually I paddled on up the river about a mile stopping along the way.

Here’s one of the spots I stopped at for a bit. 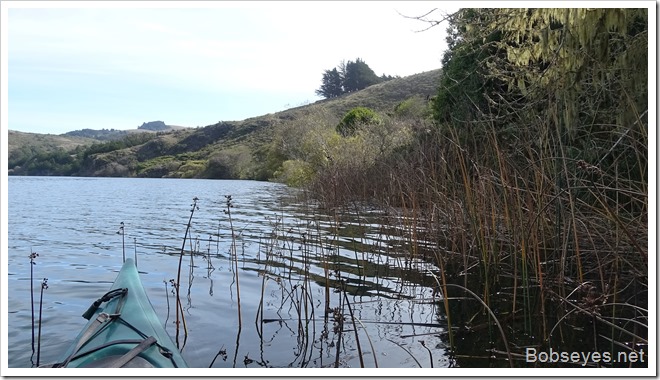 I made it up to a place I call Muskrat and sat and watched.

Here’s what the big white bird looked like as I approached to check it out. I didn’t recognize what it was. 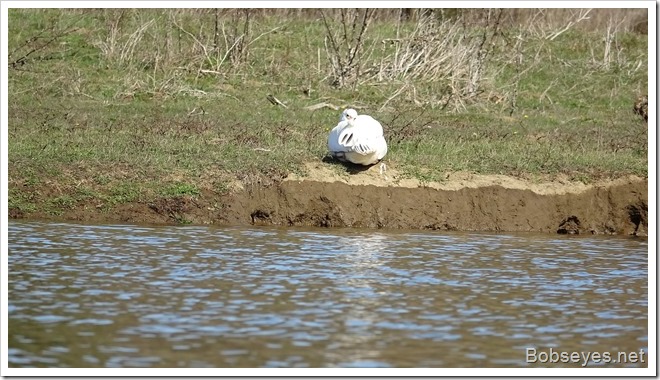 I took some pictures and then turned and started to paddle away. When I looked back this is what is saw. A white American pelican. 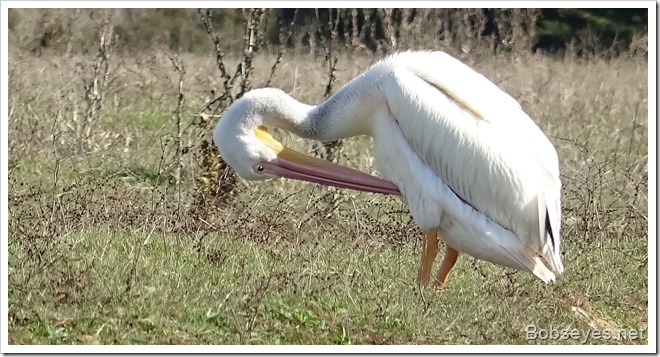 I continued on down the river along it’s edge to look for birds along here. 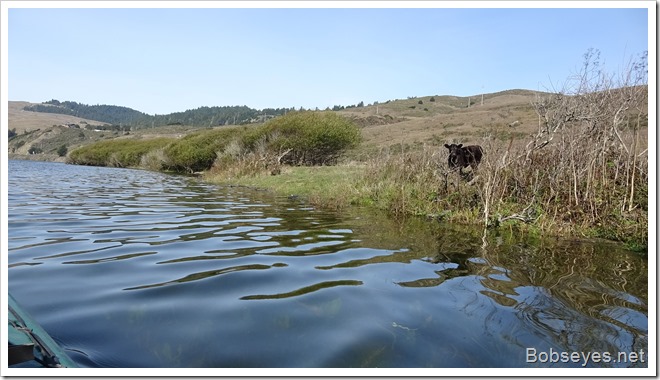 The young calf was checking me out until I got close then it ran over to momma. 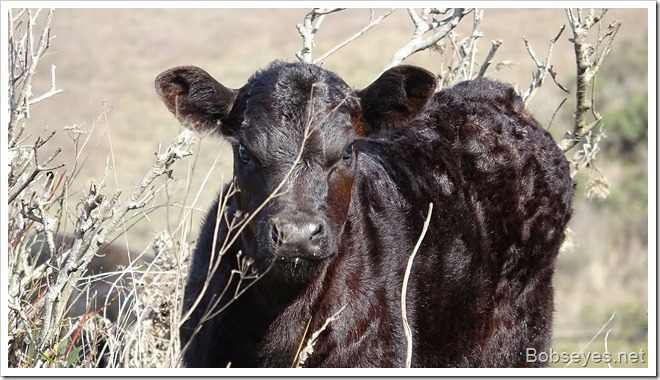 I did run into some birds paddling down that side.

Here’s some mallard ducks I padded by. 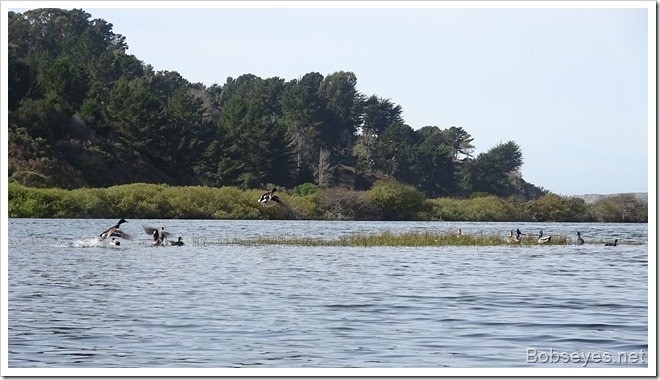 There were a bunch of geese and some ducks on the shore just before I crossed back over the river. Here’s a few of them. 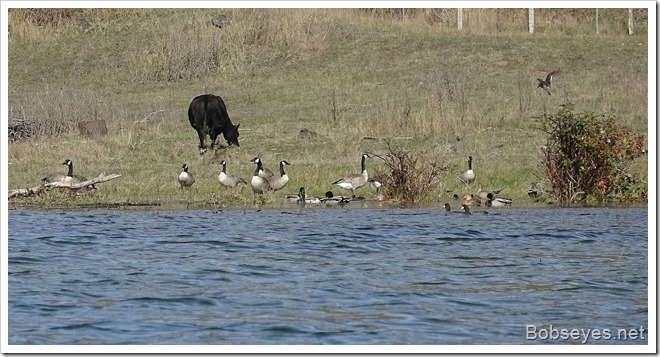 With the river’s mouth closed the water level of the estuary is up just above 7 feet so half of Penny Island is flooded so I paddled on down the island”s back channel to check it out.

I’m just paddling into the lower end of Penny Island where I can paddle onto the flooded island. 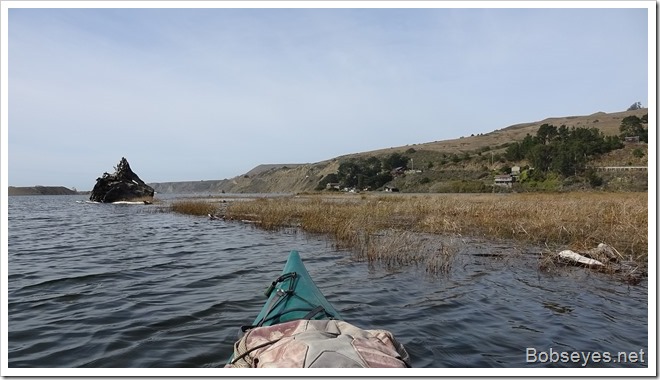 This is the way onto the flooded Penny Island. I can paddle into it a couple hundred yards or so which I did. 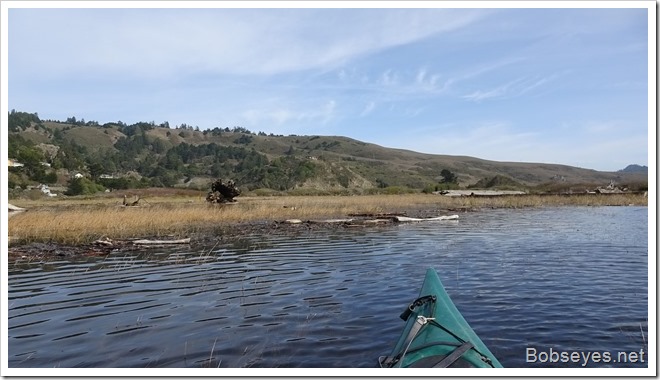 I’ve paddled as far into the island as I can where I take a break in my boat and watch for stuff. 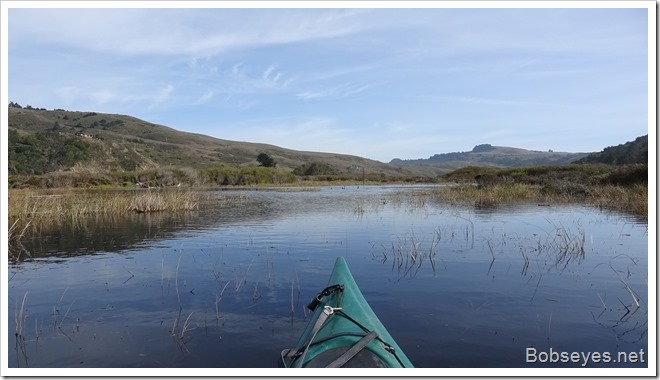 I’m paddling back out and am about half way back out to the river and ready to head in for the day. 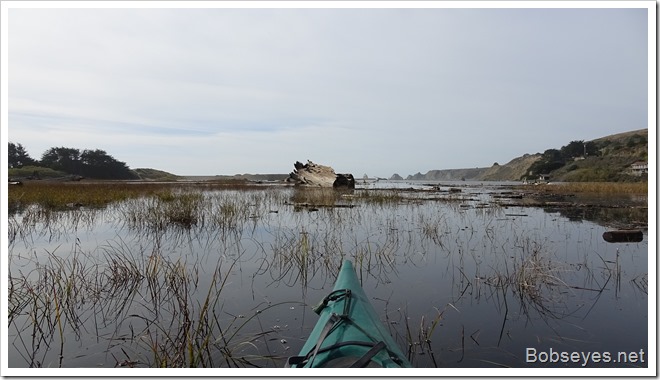 I passed by these cormorants on the way in. 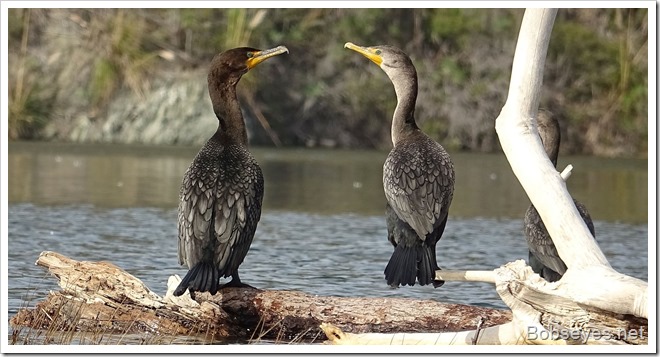 I got the boat on the car and went on home. I seemed all tired out so I napped for quite a spell before going out and checking on my chickens.

They seem to be doing well. They are tearing up my mulch area nicely. I plan to remove a bunch more of the dirt in there and put in a newer mulch bin in a few days so it’s good to let them tear it up. 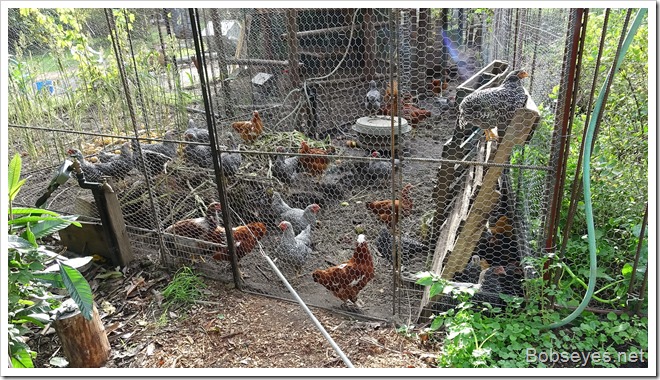 I also checked out a couple more of my projects but didn’t have the energy to do any work so I didn’t.

I just chair hopped and enjoyed the rest of the day.