Overcast, No Sun and Muddy Paddling On the Russian River

I drove on down to Jenner today to kayak the river. It was overcast with no sun so that’s the way the pictures look today. At least the wind was down nicely.

It was low tide and still dropping when I put my boat in the water. A bit muddy on the ramp but with the tide still going down it was going to be muddier when I got back to the ramp later today.

I paddled on across the river and decided to go up river first. you can see the tide is gong out as there is a lot of shoreline showing that is usually under water. 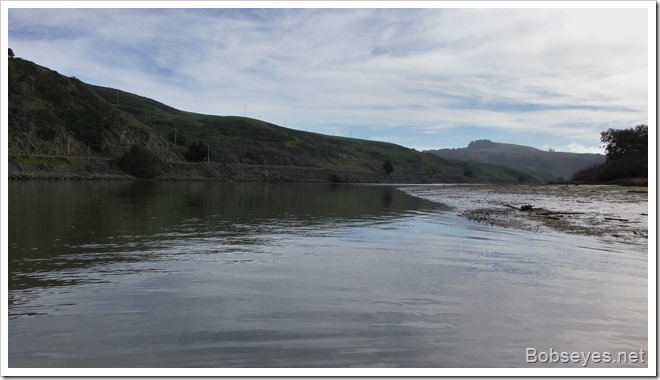 Seals and sea lions on the hunt

There were some seals on the hunt of big fish and a few sea lions on the hunt too doing the same thing. Lots of times I can’t see the big fish under the water but I know they are there by what’s trying to catch and eat them.

Moving up the river

I took my time and slowly paddled up along the south shoreline. 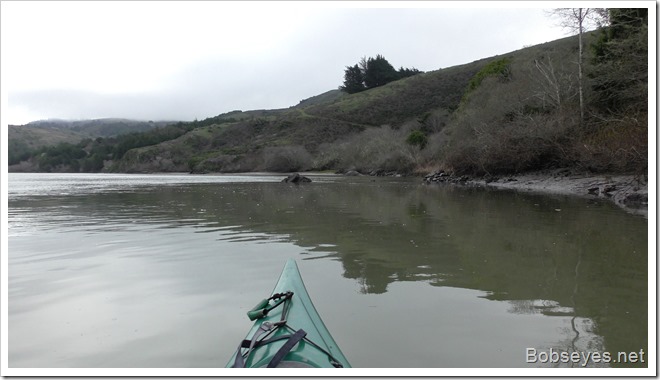 I made it up to here before crossing the river to the other side. 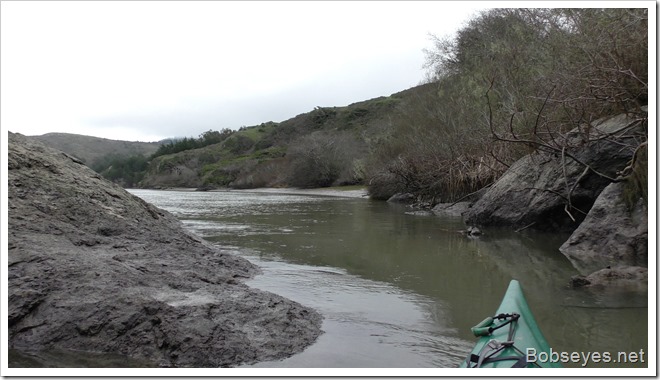 On the other side there were some geese doing what geese do, honk, honk. They were noisy. 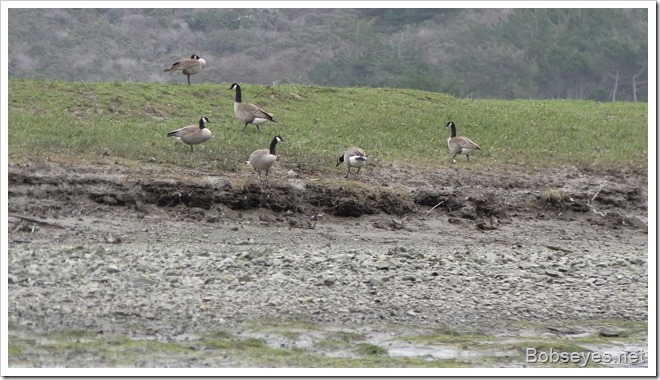 I paddled around Paddy’s rock and kept on going down along the shoreline looking for wildlife and enjoying the day. 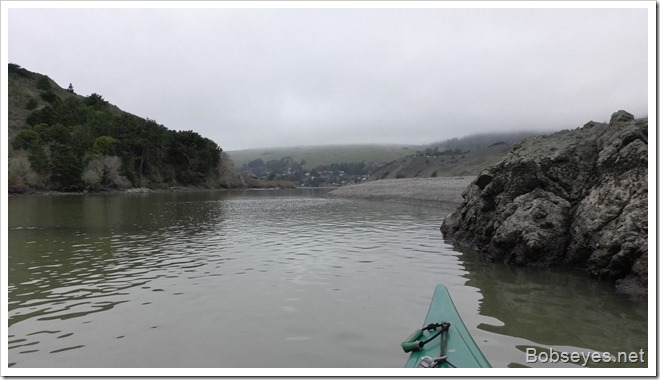 When I got back to Penny Island I tried to paddle down the back channel but it got too shallow and I grounded out so had to back out and go down the main channel on the other side of the island.

I paddled on by this great egret. 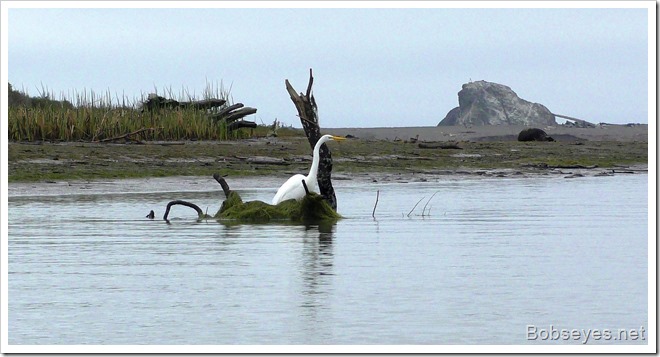 I was headed down to the open river’s mouth to have a look. The mouth was wide open and now it was low tide so not much water was moving into the ocean.

Here’s looking out into the ocean through the open river’s mouth. Some seagulls seemed to be feeding on something out there in the water. 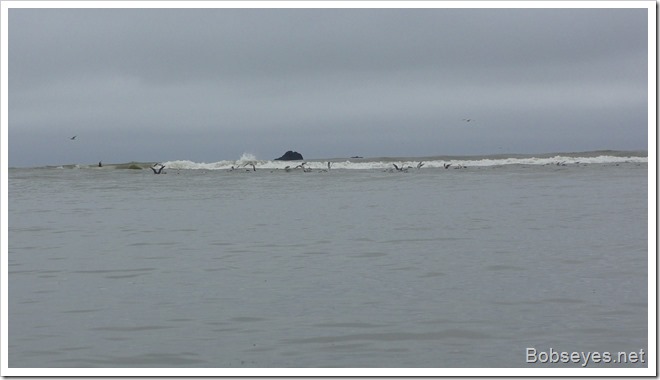 And there were even more seagulls resting on the left side of the mouth. 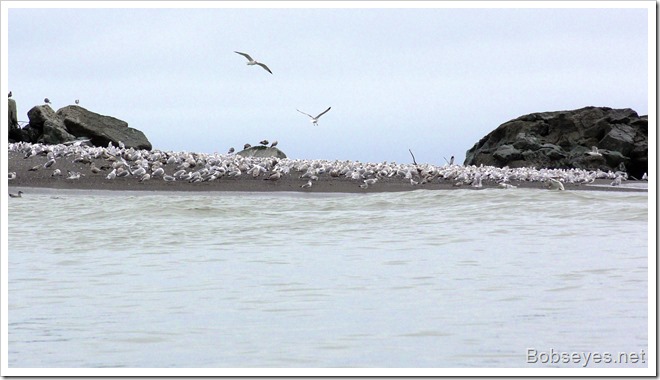 Something spooked all those seagulls into the air while I was watching. 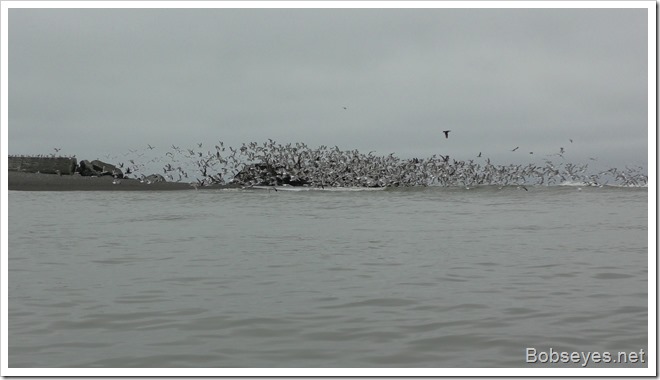 There were small waves coming into the river through the open mouth but not as bad as the other day. Not enough to make me sea sick which was nice.

Eventually I started heading back going by these resting harbor seals. 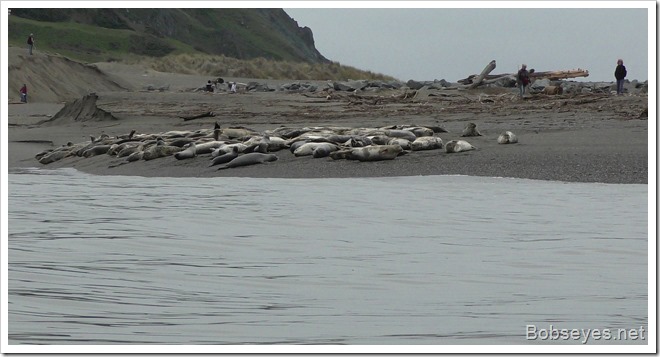 I’m headed for the boat ramp up ahead. 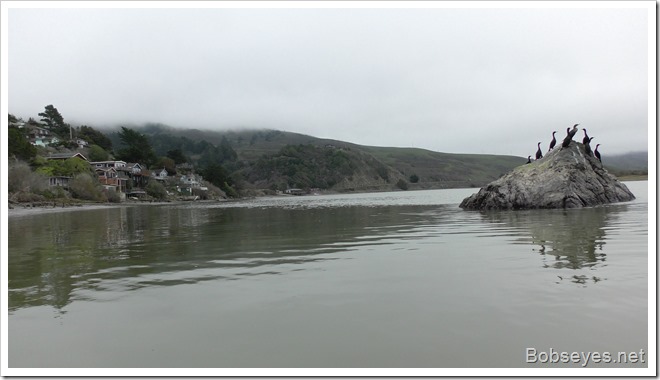 Lots of mud to deal with

When I made it to the boat ramp I found with the tide having gone out all the way the ramp was real muddy. Checking the mud with my paddle I found it to be about six inches deep and very gooey. 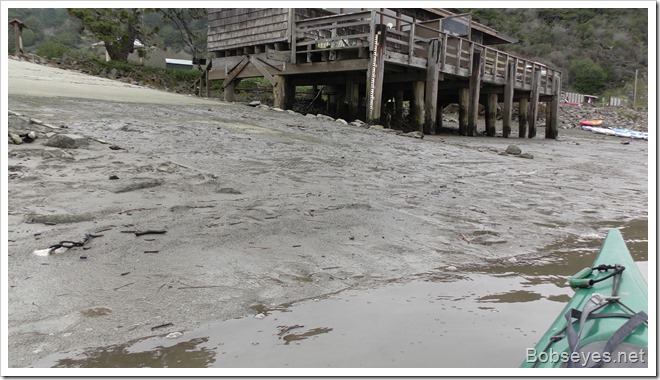 Now mud is part of playing on any river but I was going to get real muddy if I went through that so I looked for another way.

About a 100 feet away I found this little spot where a water drain washed a channel in the mud so I tried it. I made it through. The mud was only about two inches high if I was careful. I ended up walking up the little washout as I packed my stuff over to the ramp. 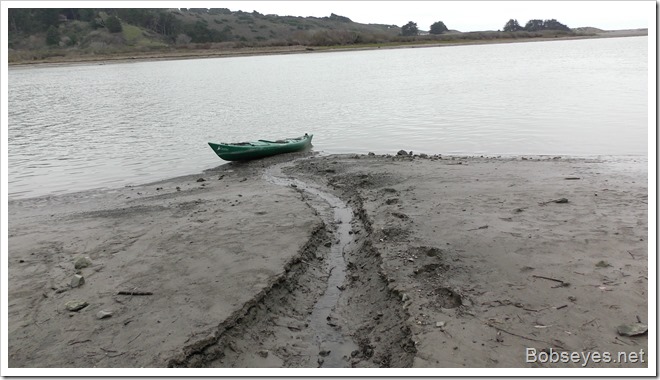 My shoes were pretty muddy but I stomped them as I crossed the parking lot to get my car and most of that slippery stuff came off, at least the bigger chucks of mud.

I loaded my boat and headed for home stopping in Monte Rio to check the boat ramp out there.

The Monte Rio ramp is real  muddy. I’ll have to remember to put my shovel in the car although I think there is more mud here than I can deal with. 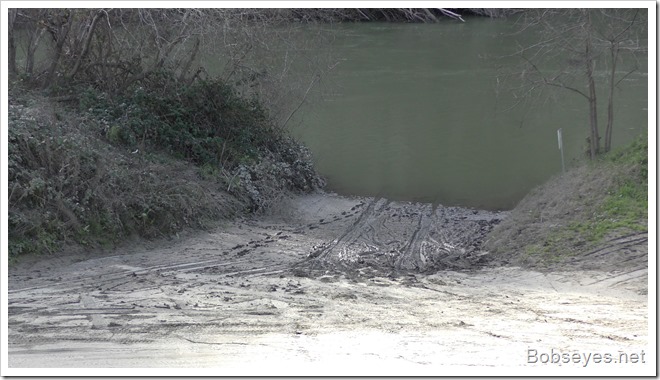 I continued on home. First thing was a nap and then a cup of coffee after letting the chickens out to graze.

Keeping the chickens off the porch

The trouble with letting the chickens out to graze is they like to poo on my porches and they’ve been messing my back porch up so I cut some wire I had to block them from it as stepping in poo isn’t nice.

Finishing up the muffler repair

After that I went under my Toyota and applied high temp silicone on the muffler I’d been repairing yesterday which didn’t take long. I’ll let it cure for a few days before taking the Toyota out for a ride up the hill.

Eventually I’ll likely replace that old muffler but for now I just want to get it usable.

Trimming trees on the road

I had some small trees out on the road that needed some trimming as the county hadn’t’ gotten around to it so I got my tools and trimmed them up a bit so now I can see getting out of my driveway better.

After that I was beat and went in the house for a nap until it was time to close up the chickens.

1 Response to Overcast, No Sun and Muddy Paddling On the Russian River