One Bobcat Two Paddling Around Jenner

I didn’t know it would be a bobcat day

The wind was down and there was some sun as I put in at Jenner today.

I decided to go up stream today, not very far, so I crossed the river to the island and headed on up that way, crossing over to the shore on the right. 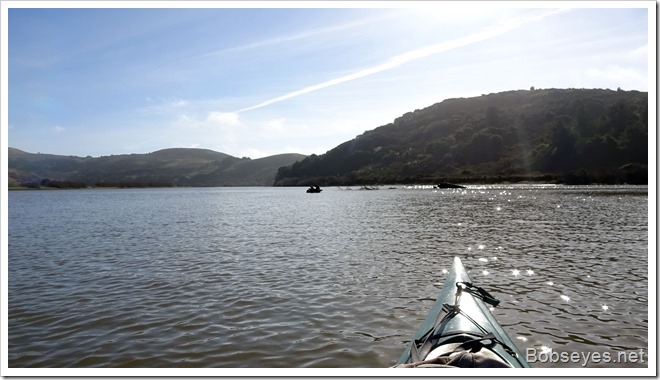 A bobcat or two

I was taking it easy paddling away when I suddenly saw this bobcat. 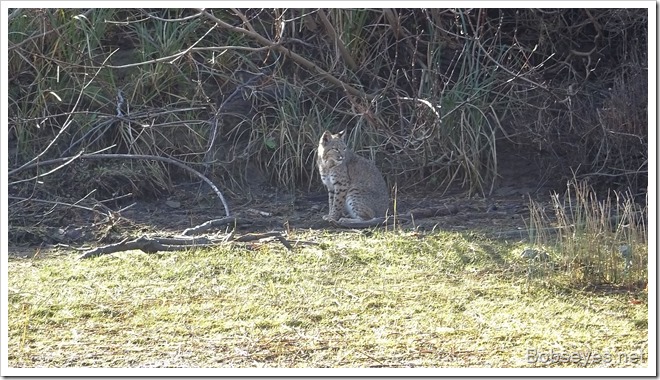 I remembered not to approach it, but instead turned my boat out into the river to pretend I was leaving. The effect is the cat doesn’t run and hide in the bushes and it gives me a chance to see what direction the cat is going up or down the river.

Well, the tactic worked and the cat didn’t move, neither did the other one that I all of a sudden also saw, so now I had two bobcats to watch. 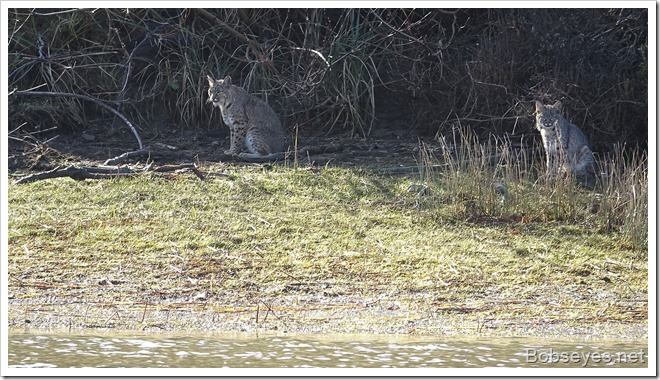 It looked like a momma cat with last years young travelling along the shoreline hunting. It was low tide so the shoreline was exposed as the water level was down.

So I came back in a little and watched them hunt on up the river. They knew I was there and kept and eye on me. 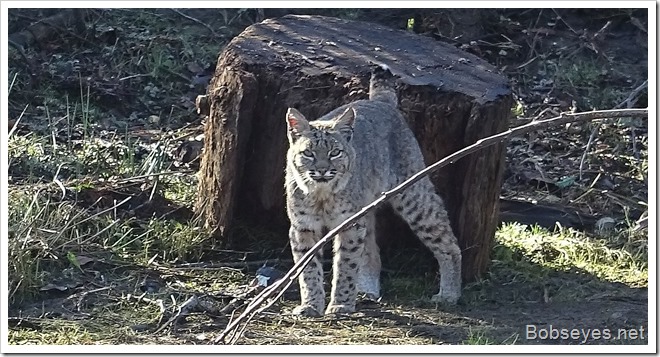 Here they are moving along the shoreline. The shoreline was running out and they would soon have to jump up into the brush, but I might catch them again as I knew they were moving up the river the same as me. 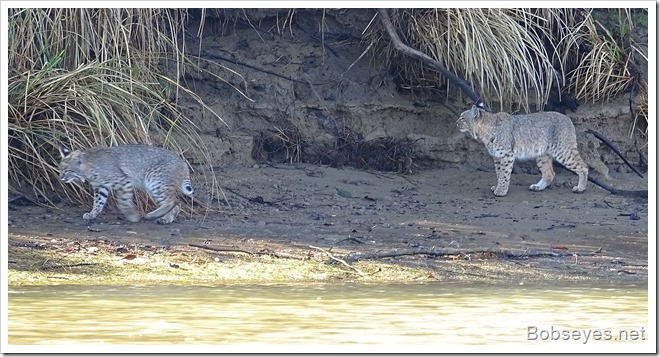 I’d followed them for about a quarter mile or so before they left.

I paddled up into these old redwood logs and sat for a good long while. 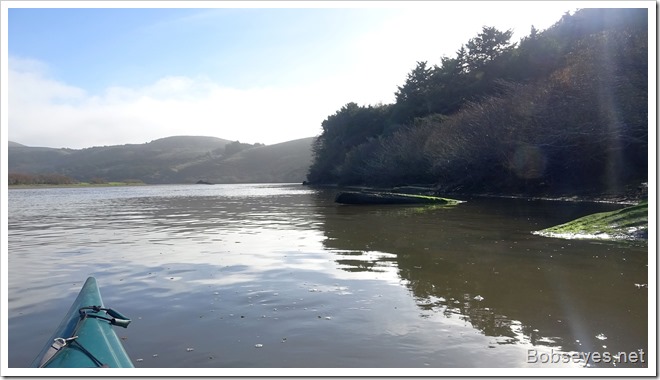 Then moved up just past Eagle’s Landing into this spot where I sat for a bit, before turning back down the river. 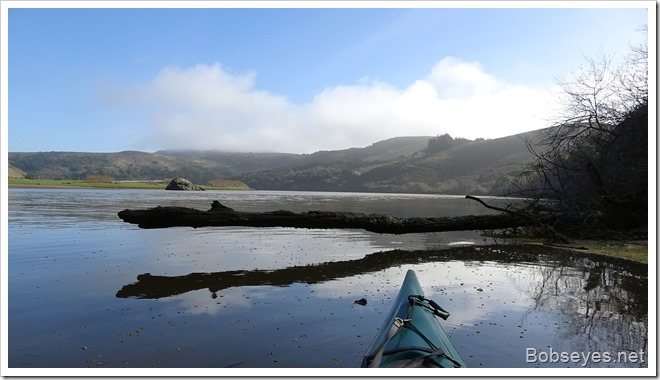 I’d forgotten about the cats as I rounded this rock by Eagle’s Landing. 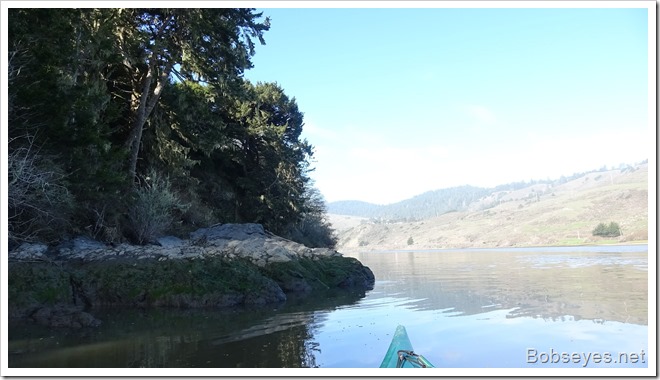 There they were the two cats, one by the shore and the other up on the trail coming towards me so I just sat were I was in my boat and let them come. 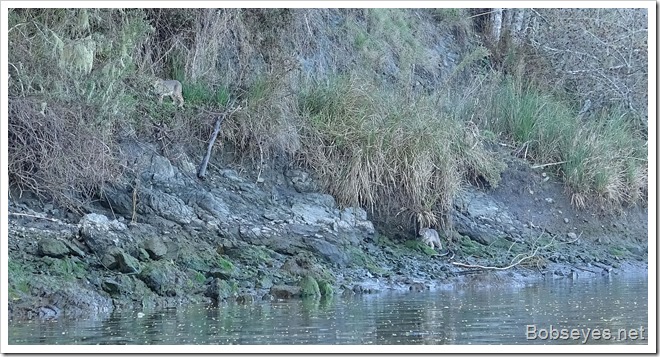 The one up on the trail was mostly in the brush, but the one on the shore was more out in the open, the younger one. 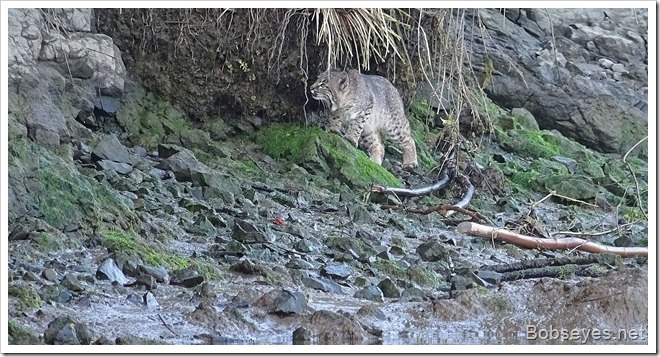 This is the younger cat just before it too hopped up into the brush. 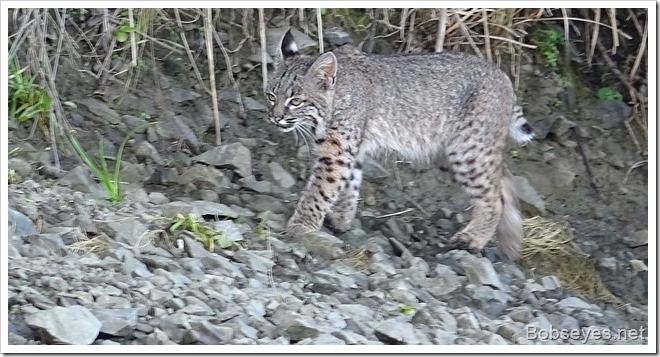 On down the river

I watched them work their way around me in the brush and the trees then left them and continued on down along the shoreline here. 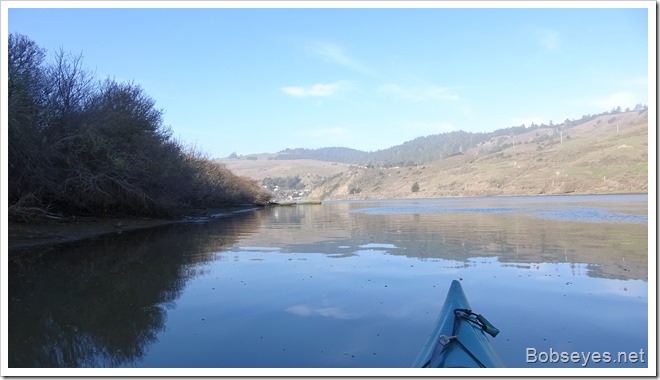 I decided to paddle down the island back channel where I could see these two herons fishing. They were catching something real small, but I couldn’t make it out. 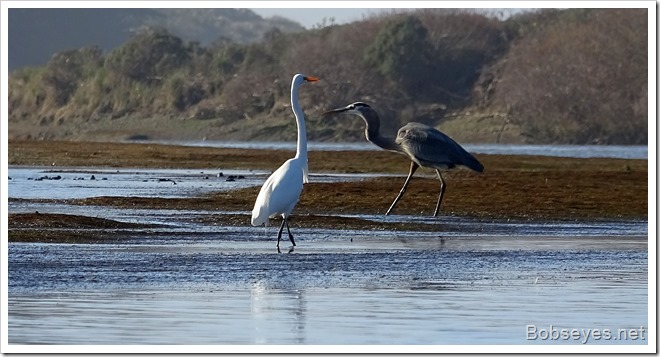 I watched them and took some pictures and some videos and then continued on down the back channel to the bottom end of Penny Island where I sat in the shallows.

While I was sitting there this seagull fly’s up right next to me and dives into the water and picks up this dead crab. 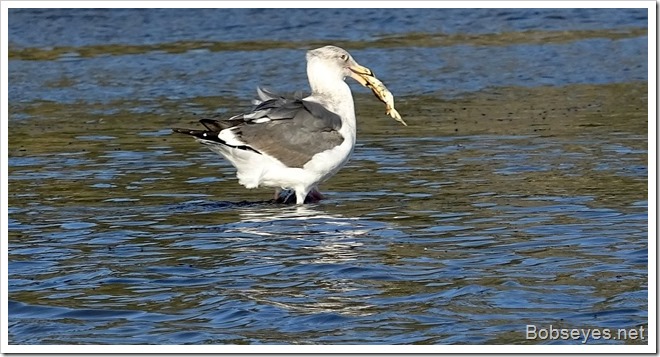 I watched it devour the thing before moving on.

I decided not to paddle down to the open mouth, but took this photo looking down that way. I could hear the ocean waves pounding the shoreline so it sounded fairly rough. 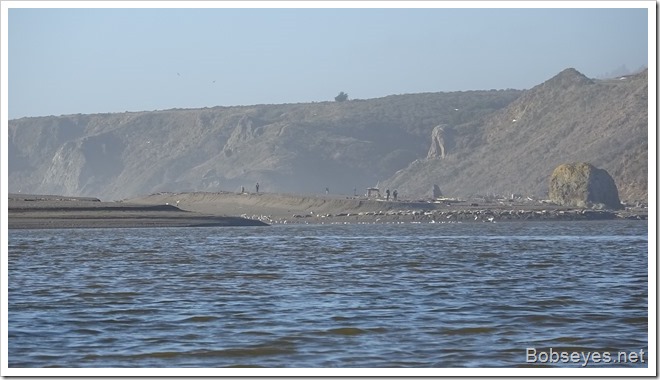 I was going to get gas, but the station was too busy and I forgot to go pick up my Toyota tire I’m getting fixed, but no matter I can do all that on another day.

I had no plans to do anything else today, so I didn’t and that was my day for a nice one.