Older Folk On the Signal Peak Trail In the KOFA Arizona

I spent the night at my Quartzsite camp spot here just outside of town. 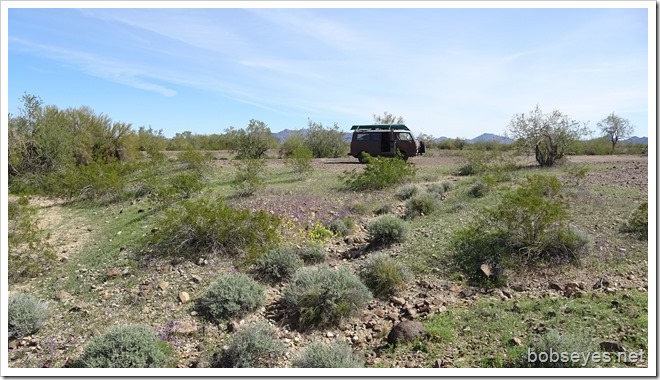 This morning I’m taking it easy still at camp doing not much of anything except enjoying the desert camp experience.

My only real goal today is to get caught up with blog posts and to take it easy.

So let’s get this thing done.

Dan and I got up to a leisurely morning taking our time getting it together. Our legs seemed to be ok a bit sore but not paining. I’d decided if we had paining legs we’d just cut the days hike a lot shorter.

No need to get to the top

I was still pretty sure neither one of us at our age and energy level would make it to the top of Signal Peak. I made it last year after working up to it so it wasn’t really important to get to the top except for Dan’s experience. And now that I’m a bit older getting to the top just isn’t so important anymore.

Doing nothing is easy

I’ve found it’s better to head up a trail and do what I can instead of not going up the trail at all because it might be too hard. Just do what you can but better to do something instead of finding an excuse to not do anything because doing nothing is real easy to do especially as one gets older. :O)

We finally got it going and drove my van up to Queens Canyon where the Signal Peak trail started at Indian Canyon. Every thing was real lush and we ran into this in Queen’s canyon. California poppies. The place was loaded with them. 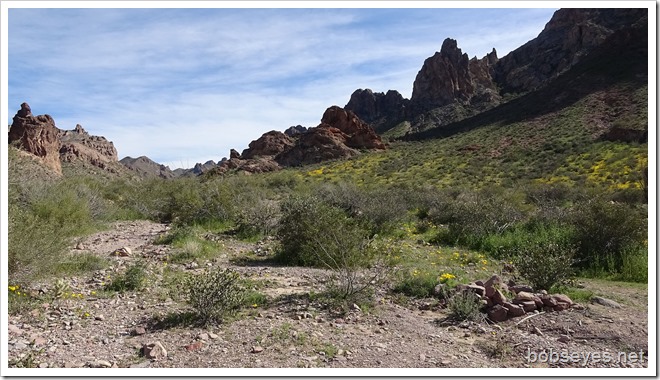 I’d meant to stop at Skull rock so Dan could play tourist but somehow I drove right past it which was ok as we could pick it up on the way out.

I parked at the trail head and we headed on out to the left of the photo up Indian Canyon. 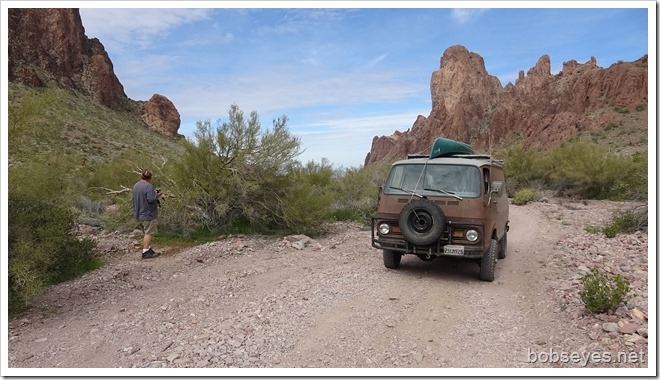 The trail starts out up a creek or drew and you can take your pick which trail you take as they all go the same way shortly. We will be heading toward that peak up there. 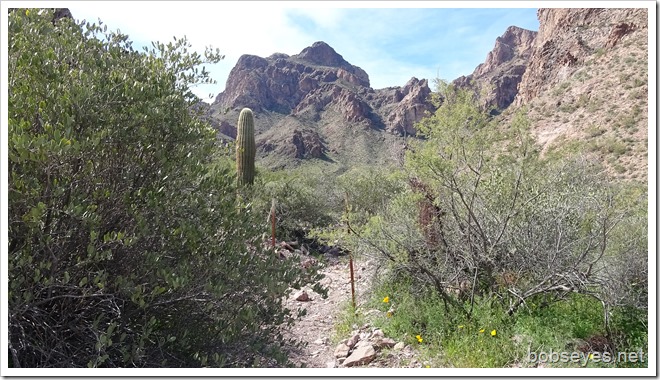 As you break out of the creek area things open up a bit an we are going up through that area straight ahead. Poppies everywhere. 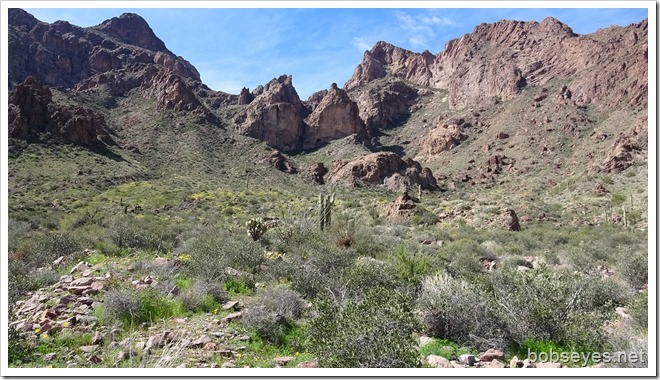 We were amazed by all the poppies. Every thing was super lush. Things were just starting. The other colors will follow and the cactus will start to bloom as non were blooming yet. 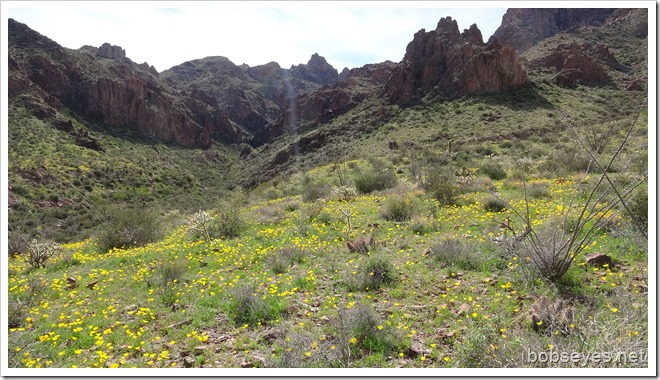 The trail went up through here. Who needs to get to the top. 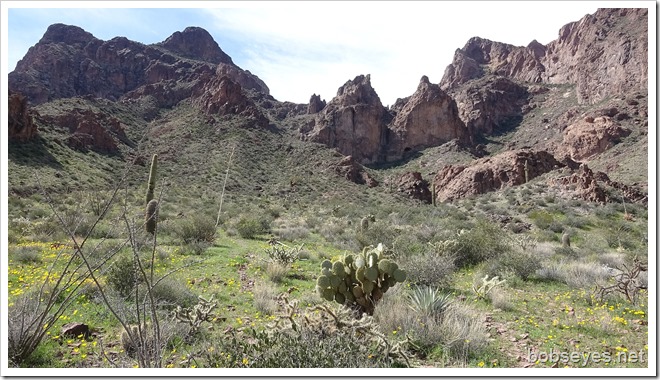 Here’s one where you can see the trail. Another one good for older folks to improve balance and health. 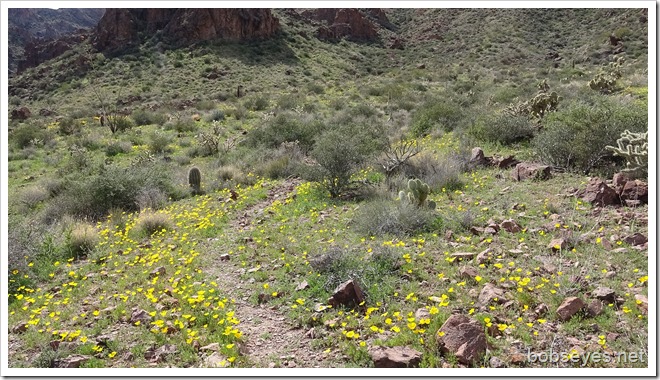 We stopped and rested here for awhile looking back over where we had come from. 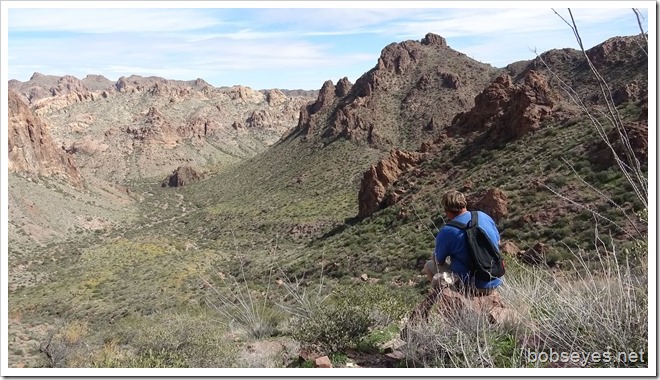 We could really feel the trail in our calves but were doing ok so we continued on up through this area which heads for that peaked area, but it’s further up there than it looks but if Dan didn’t stop me that was sorta my goal. That  wasn’t the top, there’d still be about another hour of hiking past that to the top. I was concerned that if I made it to this spot, I might have some serious upper leg cramps which are the worse kind. 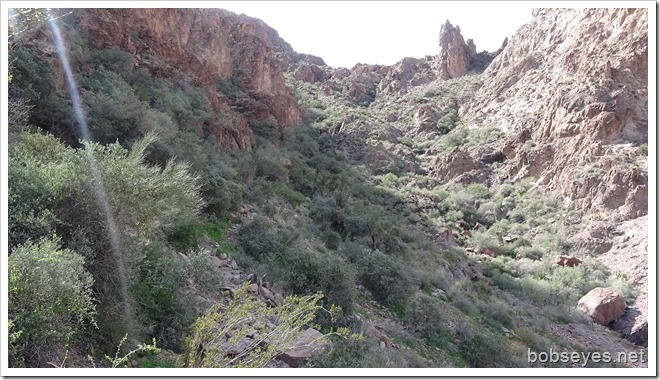 We had hiked an hour and a half and had to do a rock scramble because no one had trimmed the brush in years that had overgrown the trail. It wasn’t real dangerous or anything but when ones legs are a bit wobbly they are places to be concerned and not real fun.

I wasn’t sure Dan was going to go for the rock scramble. After a short rest we did it and stopped for a rest just above it.

Sensible thing to do

Dan says, don’t tell every one I’m a quitter but we still have to go back down. This was enough for him. I said I’d tell every one you made an intelligent decision and I’d be thanking him again tonight as if we went all the way I think the leg cramps would be pretty bad as we weren’t in real good shape to do this, especially at our age but at least we gave it a go.

I think this is close to where we stopped but I was pooped and didn’t’ take many pictures. We’ll be headed back down the trail through there, back into the poppies. 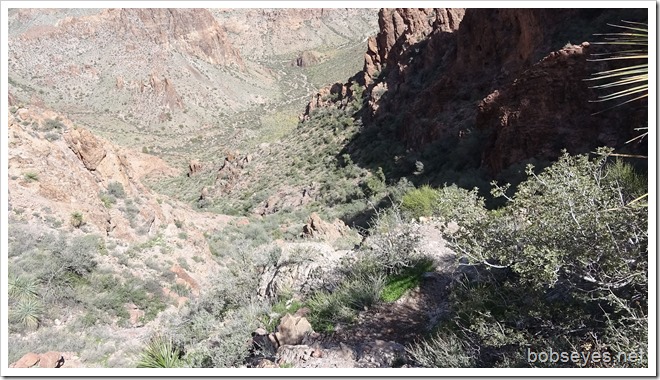 Was going to open the trail but

I told Dan I wanted to see if I could open up the trail by cutting some of the brush off the old trail that was blocked and caused one to rock scramble. He went back down the rock scramble to find a place to take a good break while I climbed up a bit higher to find the brush I needed to trim. I looked around and didn’t find exactly what I remembered from last year so didn’t cut any brush mostly because I tired myself out looking for the upper trail.

I decided it would be better to approach it from the bottom but that would have to be next time.

I started back down where Dan was waiting for me. You can see him down there taking it easy enjoying himself. It’s always nice to get a little alone time when walking out in places like this. 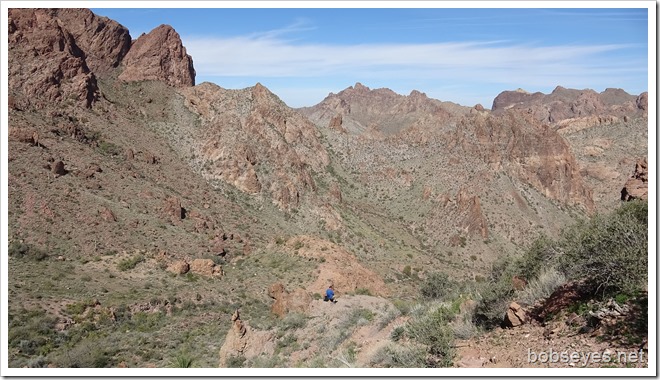 Going back down was just as fantastic as coming up only a bit easier on the body. 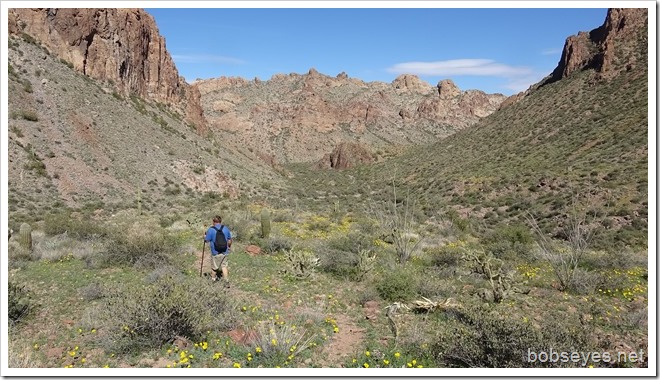 We took our time trying not to rush as we knew we’d pay for it tonight. Always good to  have something to slow you down. :O) 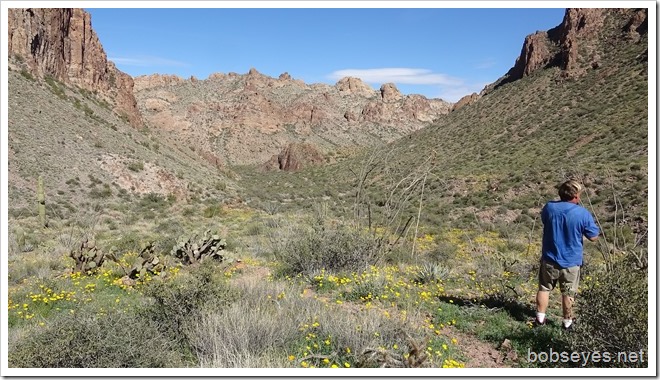 Almost back, the van is just up ahead about a mile. We are both beat and know where our legs are. 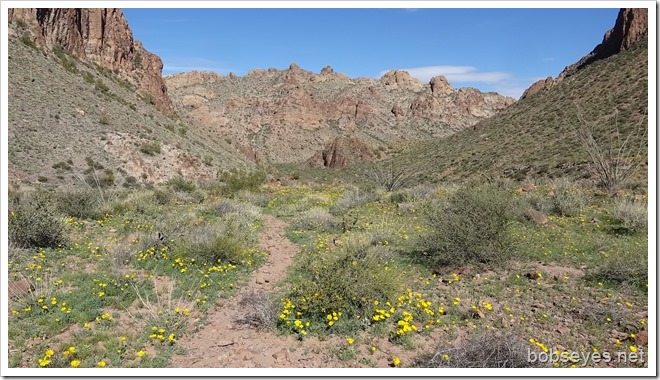 It’s always nice to get back to the van as it’s home. We drove slowly down the road and stopped at Skull Rock so Dan could play tourist. Late in the day like it was we had it all to ourselves. 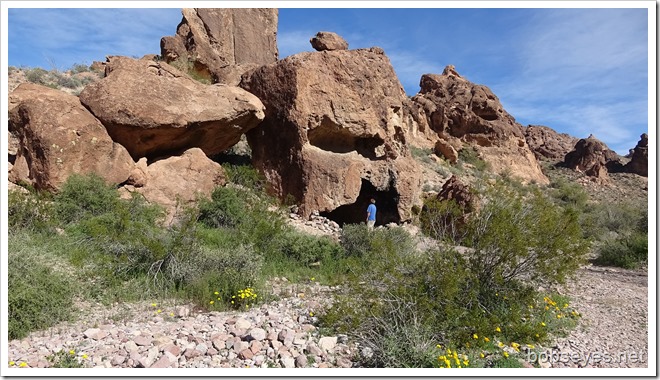 From there we drove on back to our camp where Dan’s truck was parked. I suggested we rest and eat for  awhile before taking off to head back to Quartzsite as Dan needed to head for home.

We sat around enjoying the day and discussing the hike. I thanked Dan again for not going too far. As it was I had some upper leg cramps but not too bad as they could have been. Thanks again Dan.

I’ll just close by saying we couldn’t have had better weather for desert hiking. And with all the recent rains the desert was just lush, lush, lush. Just about perfect and no need to get to the top and it should only get better.

Enjoying the passage of time

That pretty much catches up my blog. I’ve been hanging out around Quartzsite taking it easy and just enjoying the passing of time like an older person should. :O)