Supposed to be cloudy

It was just supposed to be cloudy today but when I got it going it was a bit misty.

I wanted to go down to the river for a yak so once I took care of the chickens I drove on down to Monte Rio boat ramp to have a look and see if anyone was fishing for steelhead yet. I got out of the car to get a picture of the boat ramp when I thought I heard someone say my name, so forgot the boat ramp and went over to see who it was. There was another pickup there when I went over.

It turned out to be some old time local fishermen taking a lunch break from some work two of them  were doing near by, actually they were working on the big house by the Slot where they fish a lot, just down river from here. The guy in the other truck that left was Geno, the dad who also knew my Dad and Uncles when they were alive.

Oh, it was Geno F. and his son Geno F. Junior and a worker guy I forgot his name even though I asked twice. We shot the bull a bit about old times, then Geno had to leave so I talked with these two and remembered to get a picture. 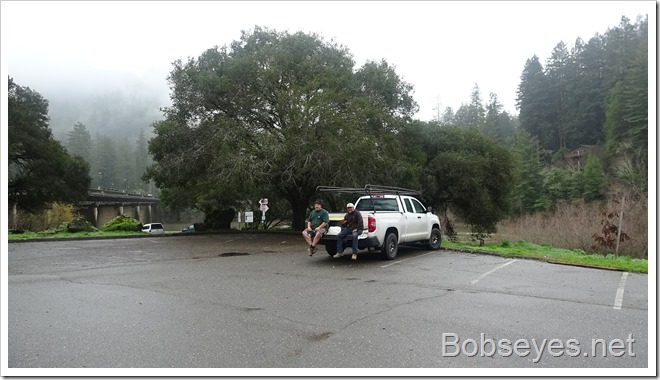 No one was fishing yet, but the rains are starting to let up so soon the river water will be clear enough for the fishermen to start their fishing.

Eventually they had to go back to work so they left and I headed on down to Jenner to see about a yak.

About a mile or so before I got to Jenner it started to rain lightly so I wasn’t sure about yakking.

When this happens I drive down to the river’s mouth overlook to get a better picture of what’s happening of the weather to decide whether I want to put in or not.

Foggy with a bit of mist

This was the view out into the ocean at the mouth of the river. It wasn’t really raining here, but a bit of mist and some fog. 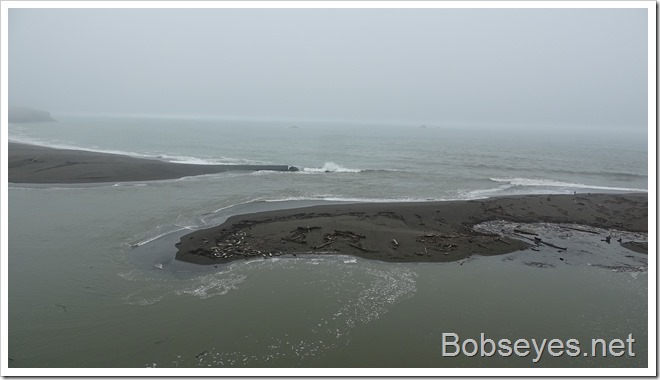 A view of the harbor seals resting down there on the sandy beach. 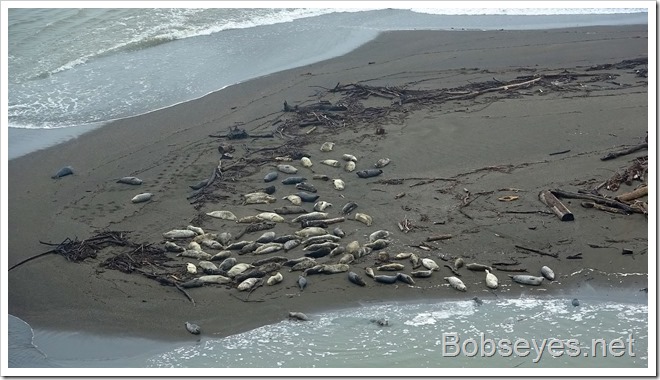 Well, my wind breaker is a rain jacket and it didn’t really appear to be too bad so I went back to the Jenner boat ramp and put my boat in the water and started heading up river. 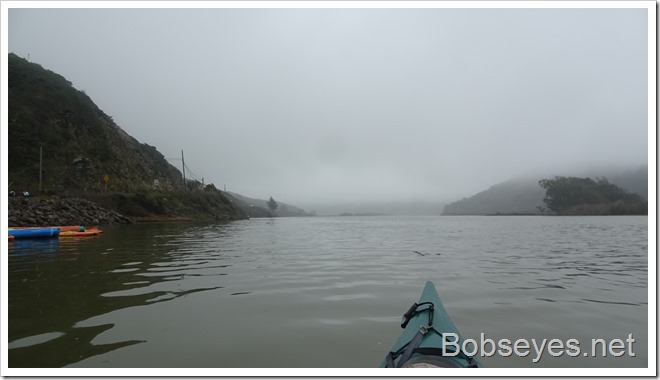 It was high tide so the river water was backed up and was like a big lake.

Here I am entering the small channel at the upper end of Penny Island where I usually pull in to sit and watch for a bit. 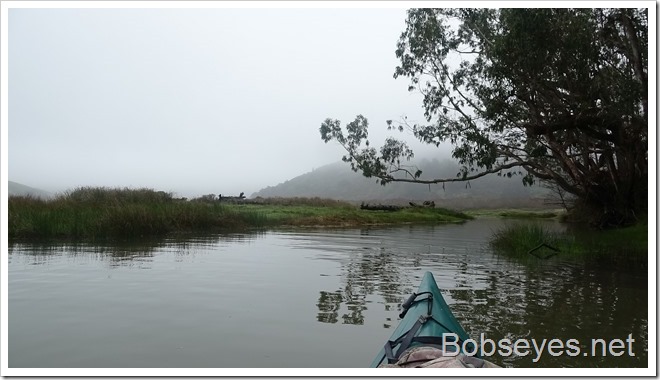 I sat here in my boat in the channel watching for stuff but with the weather their wasn’t much in the way of critters to watch, mostly some ducks and few birds. 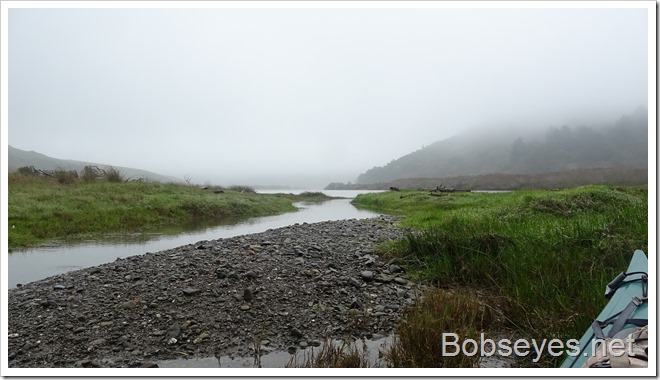 Eventually I  moved on up the river about a quarter mile to this spot I call Eagle’s Landing and sat in my boat for a bit by that big log. 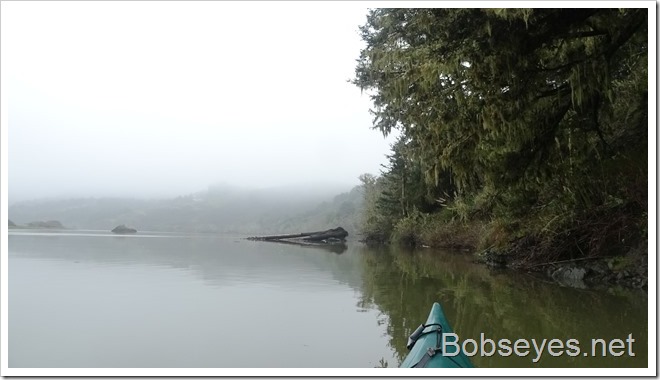 And then I slowly moved on up the river going along it’s edge along here and continued for about another quarter mile up before stopping and sitting for a spell in my boat. 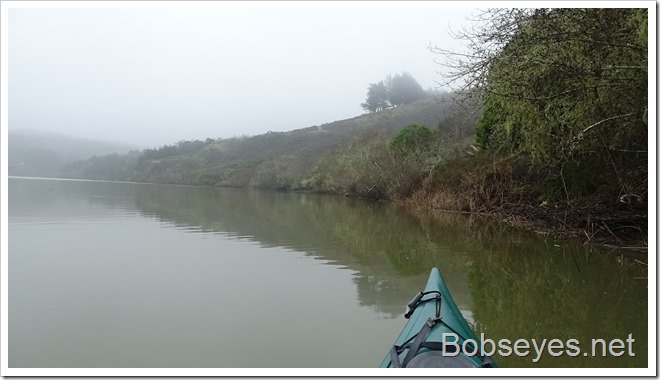 Jenner’s in the fog

I hung out in this spot for a half hour or maybe a bit more just taking it easy and keeping my eyes open for anything moving but there wasn’t much today. This is looking down river towards the town of Jenner which is now in the fog and I was getting some light mist. 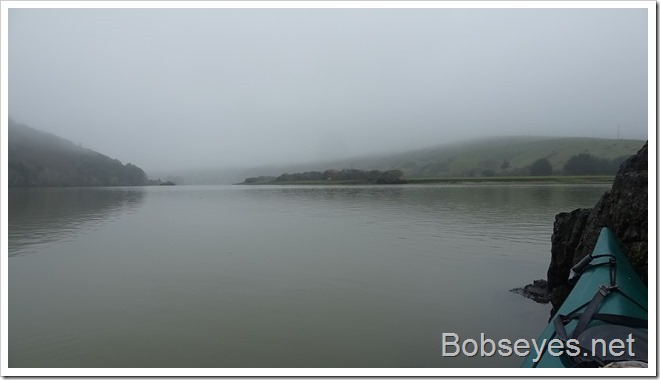 After a good sit in that spot I decided to paddle across the river and go down along that side as I had paddled up the other side to get up to this spot. I paddled over to the right shore line and continued on down drifting in the slow current mostly as the tide had changed and now there was a little current but not much. 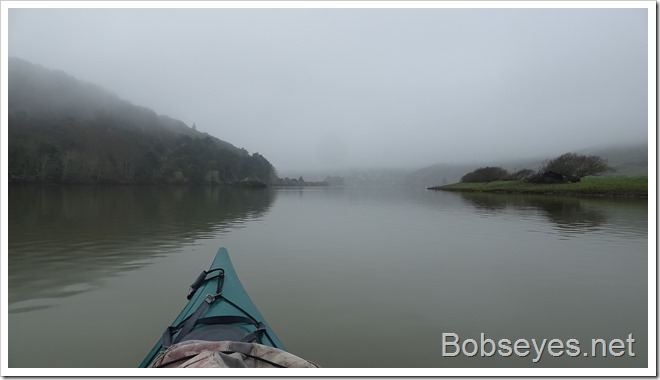 I spied this white egret first fishing away and then saw the great blue heron to the right. They retreated up onto the shoreline as I approached but didn’t fly off. 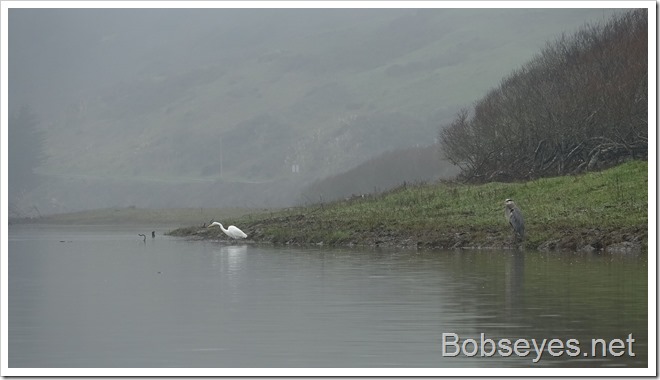 The trees on the left are on the island and I thought about going on over there after sitting in this spot for a bit. 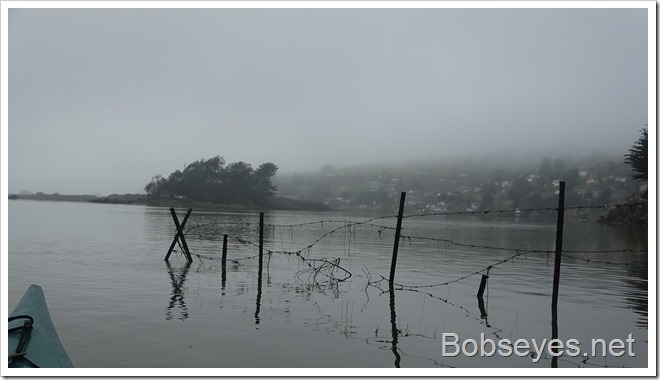 But when I started over there the light current caught me so I just drifted down the river until I got to the boat ramp where I pulled out for the day. 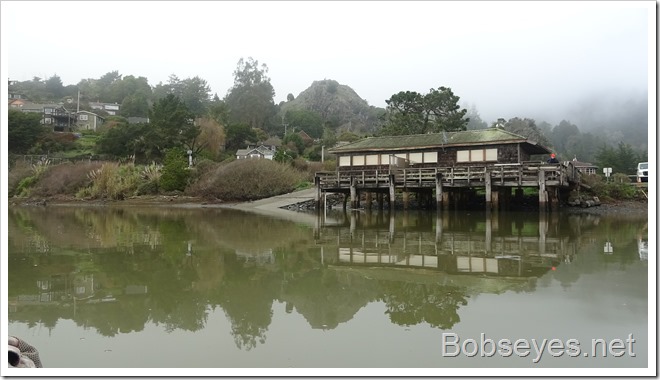 I loaded my boat on my car and headed on home up the river, a twenty or thirty minute drive along a designated Scenic Highway.

Even though the sun didn’t shine it was still a pretty nice day on the river and at least the wind was down.

The chickens heard me drive in and were at the gate so I let them out to graze. That chicken in front jumped over the fence to get out here sooner. I have a couple of them that do that which isn’t really a problem.