Getting under the old bridge

With the rain we had last night I remembered I needed to do one more thing under the old bridge and that was to put some more screws in this metal roofing as some of it is loose and flapping in the water when there’s water. 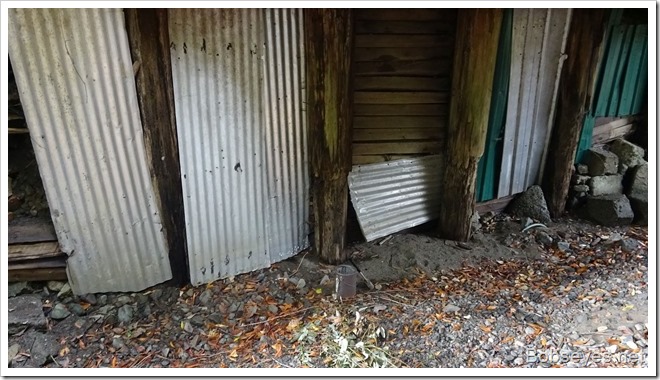 I got the screws and the tools I’d need to do the job and got it done, pretty easy stuff.

Cleaning out the chicken areas

Lately I’d noticed it was about time to clean out some of the chicken pen particularly this spot where the meat birds sleep at night. There’s also a little black chick that sleeps with them. I’d rather they sleep in a roost but the meat birds seem to prefer the ground. I think the roost is cleaner and likely less bugs to deal with as on the ground bugs can hide in the bedding material. 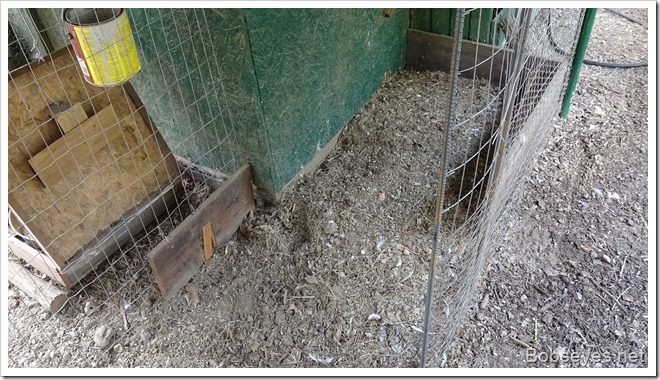 I shoveled all the old stuff into the wheelbarrow and hauled it to my big mulch area, about three loads of it. 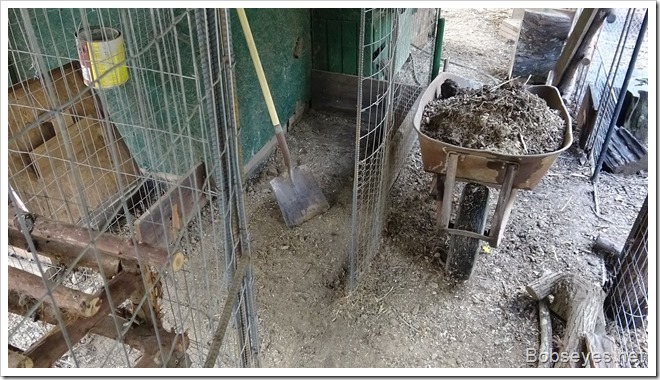 I was thinking of putting woodchips back in there for bedding and then thought redwood leaves would be nice. Than I thought about pepperwood which is also called bay leaf would be better as bugs aren’t supposed to like it, so I compromised. I have plenty of these leaves on my driveway that need cleaning up so I get more than one thing done.

The top of the wheelbarrow is redwood leaf. 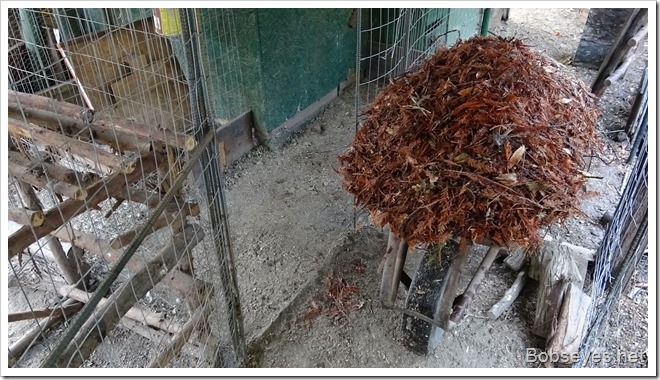 I put the redwood leaf in first. 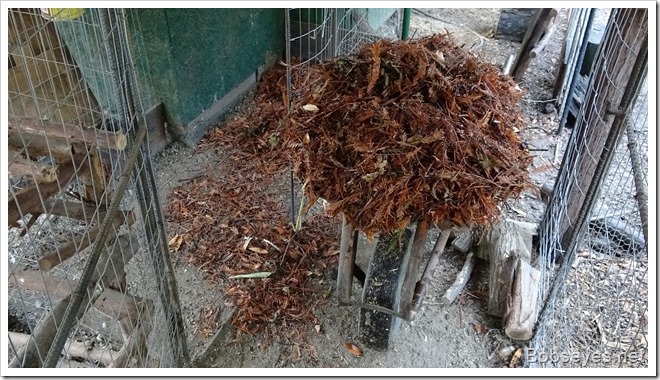 The bottom of the wheelbarrow was pepperwood leaves so I added that next. 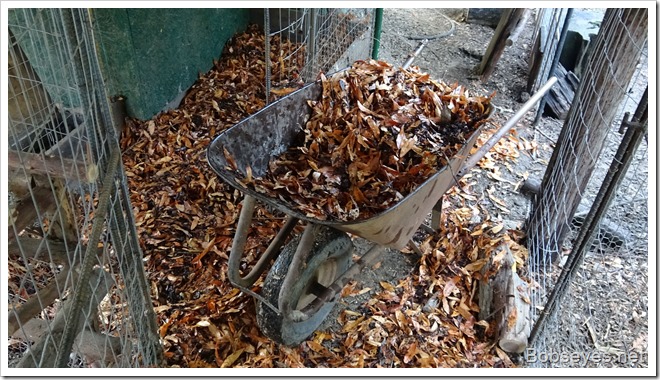 I also did the outside part and now looks like this. I  hope the chickens like it. 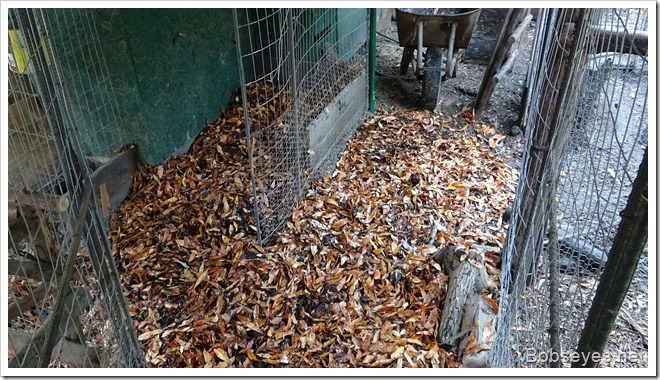 After a break I cleaned out this part. It’s where my younger chickens roost and had a lot of poo there that I thought would be better in my mulch pile. 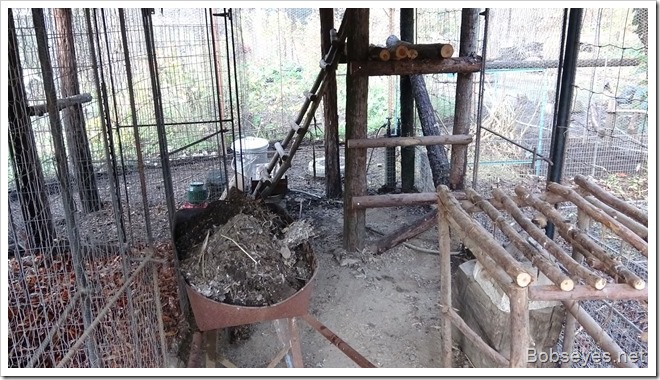 I filled it all back in with more pepperwood leaves. 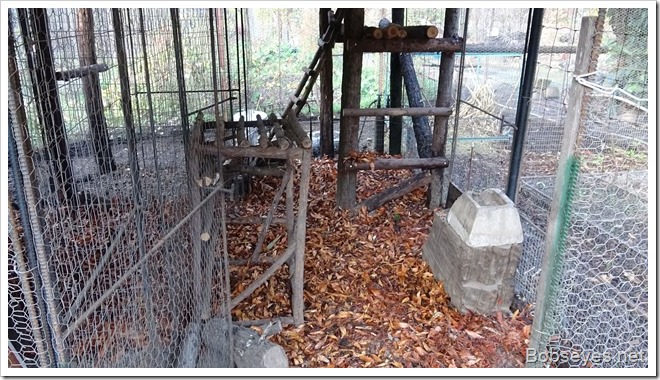 That was enough of that today. I’ll do the big chicken part soon.

The rest of the day I spent chair hopping and just puttering around the yard and enjoying the day as the rain had mostly stopped.

Towards evening I remembered Steve wanted some of my kiwi wood for smoking fish. I cut most of my kiwi down last year so there wasn’t much to get.

I got about a six inch diameter block of this wood for Steve. He clams it’s his secret ingredient for smoking fish. 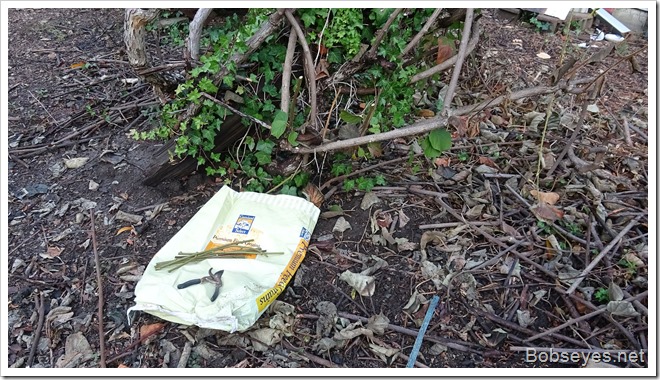 The day cooled down so I went on in the house and that was my day.

(Visited 186 times, 1 visits today)
This entry was posted in Uncategorized. Bookmark the permalink.

1 Response to Old Bridge Repair and Mucking Out Chicken Pens