Off to Port Orford and a New Place to Camp

Getting the trip on the way

On Tuesday I left my house at about ten in the morning headed for Port Orford Oregon up highway 101. It was a fairly warm day with lots of hills to climb over so the van was running a bit hot I thought and I was wondering if the axillary electric fan was running or not as I can’t hear it when the van’s engine is running so I was looking for a place to pull over and turn the engine off and the key back on to see if the fan was running. I finally found a spot and pulled over and shut the engine off and turned the key back on and yes the fan was working.

Got the big wrench out

I got out  my tarp and a big wrench to use as a hammer and went under the van and hit the starter and the starter solenoid a few times and went back in and tried the key again.. Still nothing,,,,,,,,,,,,,,,,,,,so.

I went back under and used the wrench to short between the hot and the starter wires and it cranked so I tried to start it until I remembered I had the key off. Once the key was on it started right up so I put my stuff away and continued on thinking I’d have to look at this later and don’t shut the engine off.

Made it to camp

I made it almost up to Port Orford just before dark. I checked my camp spot up on the hillside and there was a van in there so I drove back down to the lower camp spot by the highway and pulled in. There was a van there too but I decided to stay and pulled into a spot as far away from the other van as possible.

This is the spot where I camped for the night. 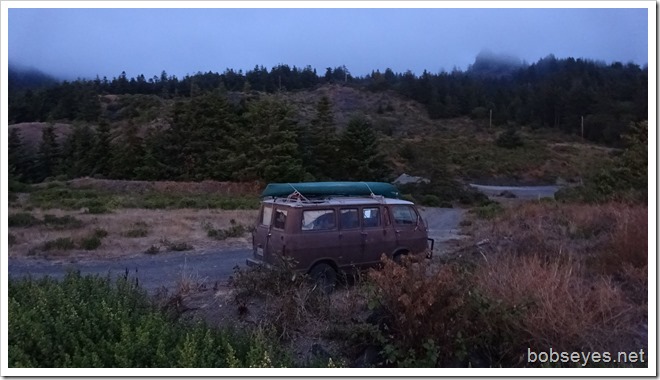 This was my view of the ocean from my camp spot. 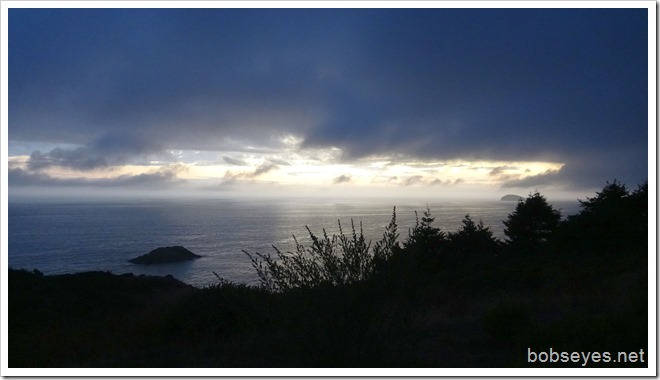 Before I went t bed I tried the key to start the engine and it started right up with no problem. There’s a spade connector by the starter solenoid which I think might be where the bad connection is which I’ll check eventually especially if it happens again.

I had a peaceful night there and the next day I drove the few miles on to Port Orford and did some internet at the library, then went to the shop to see what Steve was doing and make some plans as he needed to show me where the property was where I was going to camp for this trip.

He had time to show me where the property of a friends was who just purchased it a bit ago so we drove the short distance to the place. Nice place I’ll be back with my van tonight.

From there I drove on down to the harbor area where I discovered they were doing some big time work and had the end of the dock area closed. They were moving those big boulders on the right out to rebuild the jetty that the ocean has been wearing away at for years. 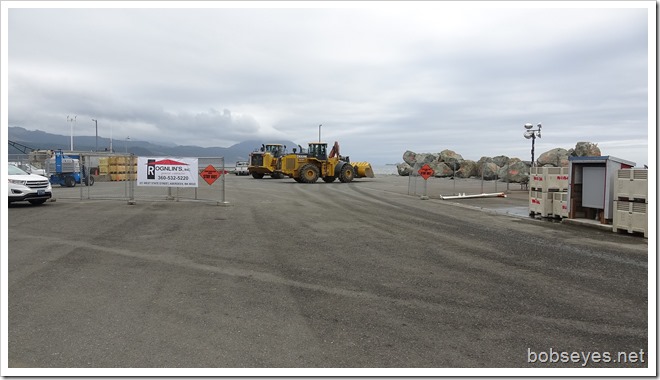 I parked my van and walked around to have a look to see what was going on.

I was standing here when a guy says you’re too far, not beyond that sign there. The machine on the right is passing a boulder to the machine on the left. He’ll put the boulder where it belongs. 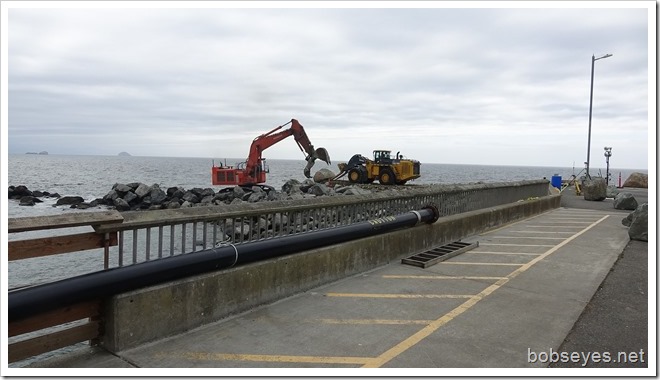 It was Tony the guy in red on the right. He works here receiving fish and has for years. I shot the bull with him before which we preceded to do when this other character shows up and joins in the bull. 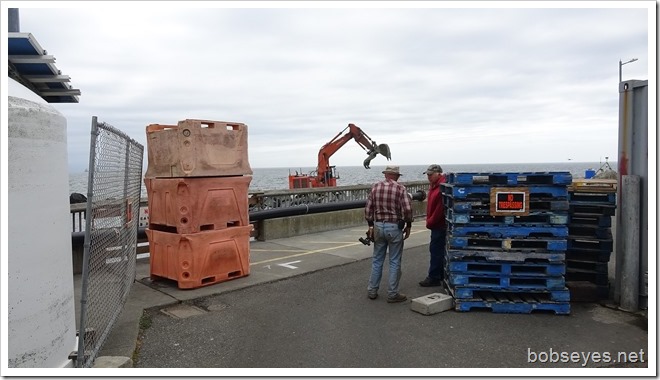 The guy that showed up was talking about big tractors a bull dozers and stuff and how his body had gotten all torn up in his younger days. I finally asked what business he had been in and he said he was a logger. It seems olden day loggers were pretty hard on their bodies.

Anyway we had a good conversation and eventually Tony says he sees his fish truck coming down the highway across the ocean where we were standing. He could see the highway from the dock about a mile away. He says, finally, time to get to work as he and his wife load the days catch on the truck using a forklift. His wife operates the forklift and she’s very good at it. They get to go home once that was done.

Tony says they’ve been catching tuna so that’s what they were loading. I didn’t hung around and left to check out the property where I was camping for the night.

I pulled in and went over to the house where a guy named John is staying and sorta caretaking. We shot the bull until dark and I went out to my van and decided right here will be good enough for the night. It was a peaceful night

Steve showed up the next morning late and did a bit of weed eating. This is the spot I’d camped for the night. 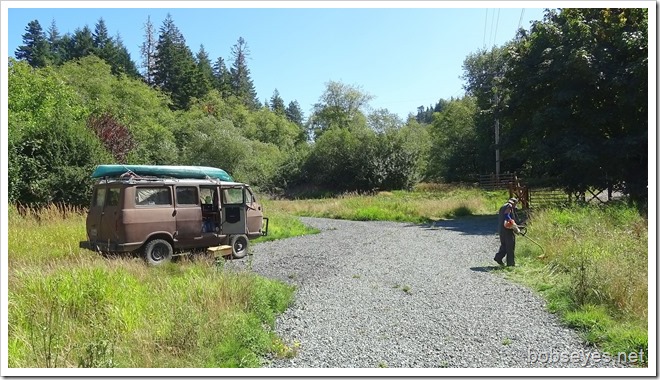 Eventually Steve left with that noisy weed eater after we made some boating plans.

Taking it easy, resting up

So I’m spending the day sitting around here and writing a blog, mostly taking it easy. Shortly I’ll drive the short distance to town and post this blog at the library.