Barry showed up with his dirt bike for a ride, but first he shot the bull with Tom about fishing in the ocean. 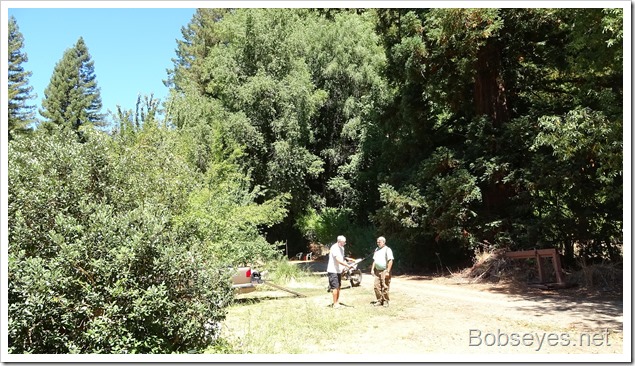 Tom’s showing Barry how to do some stuff to catch fish in the ocean as he’s been doing quite a bit of it and Barry is just getting started. 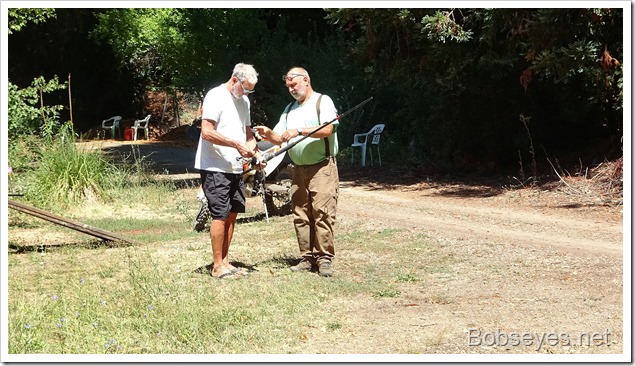 They  had quite a bit to talk about so they sat down and  went at it while I sat and rested up listening. 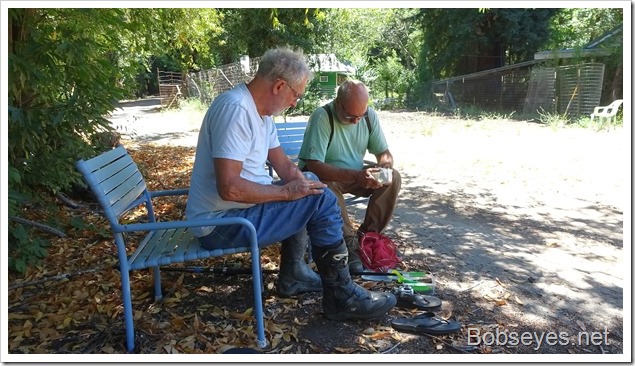 This is near the spot where Barry crashed his bike going through a creek with steep banks just off to the right of here. 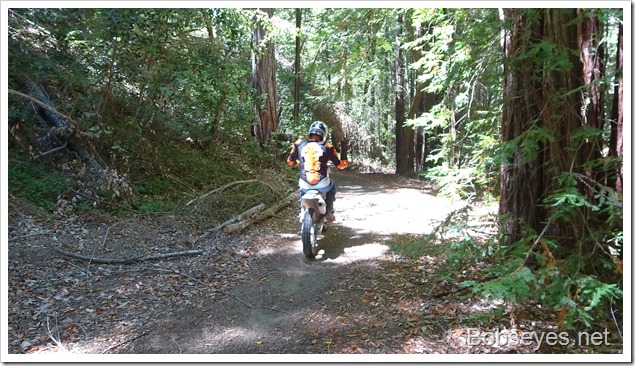 But first we rode around a bit and then came back to this area. Barry headed for the creek crossing which I didn’t particularly like from the last time he went that way. The creek has a steep bank coming out of it, around ten feet, almost straight up with plenty of nasty rocks in the creek bed.

He got through the creek, but going up the other side he didn’t quite go fast enough to get his front tire over the top edge and stalled out and then he and his bike headed backwards to the creek bed. The bike fell over pm the hillside and he landed in the creek on his back hitting his head a bit on the rocks, he had his helmet on.

I didn’t think he fell that hard but he landed on some rocks in the creek bed and started squealing like a stuck pig. I thought, oh no, we might need some help with this one.

I got to his bike and picked it up so the gas wouldn’t run out and got it stood up in the creek bed.

Barry stopped squealing but he was hurting pretty good. Even with his body armor on ,those rocks hurt real good, but nothing seemed to be broken.

I thought he’d head for home after that, but no, he headed for his hammock up on the mountain top. I knew he was hurting as he took all the easy ways up to that spot. 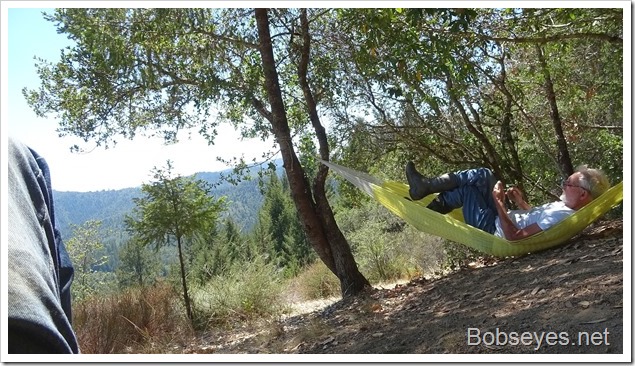 We shot the bull and he tried to teach me how to use my cell phone better as I’m not too good with it as there’s not much signal at my house.

This was the view. The fog is sneaking up the river coming from the ocean. 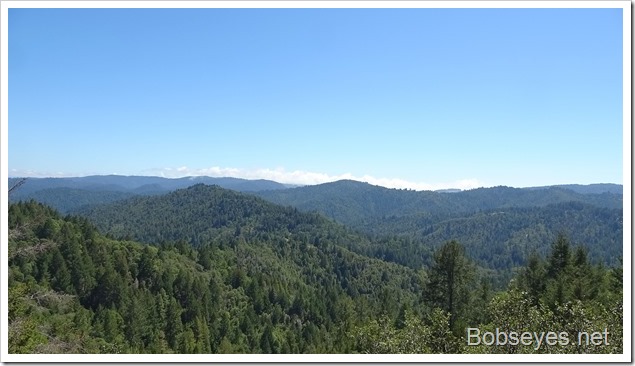 I think we stayed up there for about an hour. Barry had a hard time getting back on his bike but he made it with a lot of groans.

We headed back to  my house taking the easy way and taking it easy.

Somehow he got his bike loaded up with a bit of help and he headed for home to lick his wounds and find those pain meds he had from his last injury.

I got something to eat and had a bit of a nap.

My project today, before Barry showed up for a ride, was to see about fixing the car’s brake light that was out.

I needed someone to step on the brakes but no one was around so I propped it with these sticks, to keep it on, so I could move things around to see if I could get the light to light. 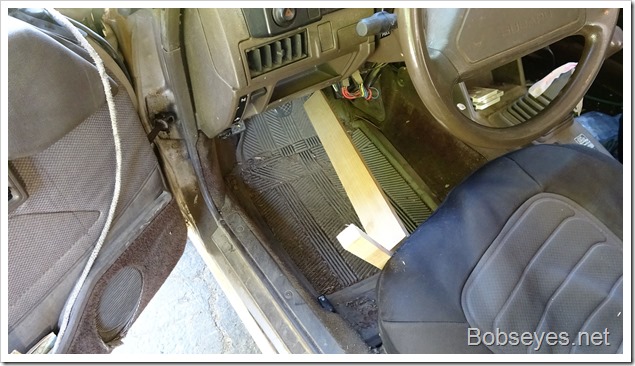 Moving the wires on the light socket did the trick. The light came on and I put it all back together. Now I have brake lights. 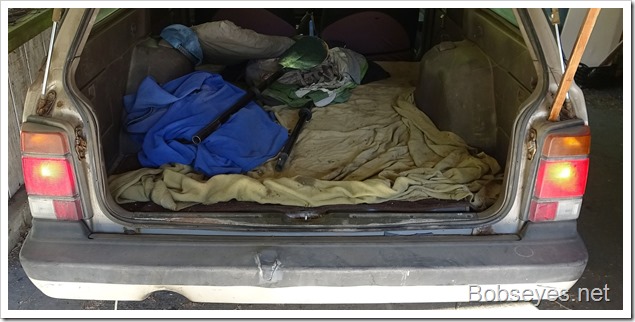 That turned out to be fairly easy which was nice.

I  had this one in the attic to watch for rats but haven’t seen any up there so I climbed up in the attic and retrieved it to use in my garage for the same purpose and set it up and got it going. It’s hooked to my computer so I can watch what’s going on when motion sets it off. 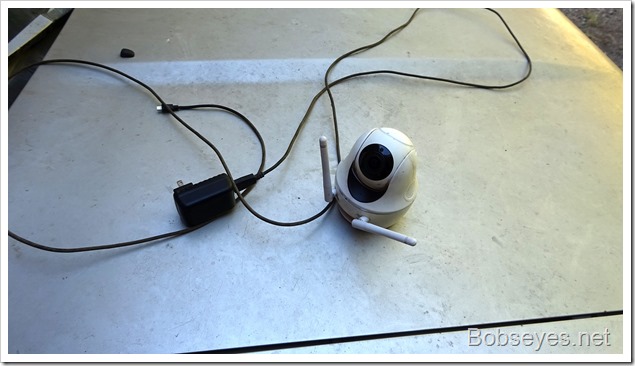 Barry has been ragging me about using my cell phone more, but there isn’t enough signal in the yard to use it, that’s why I’m not too good with it.

So anyway, I decided if I could put an extender up on  my metal roof, getting a signal from Tom’s cable next door, I might be able to use my cell phone with Wi-Fi in the yard.

I got the ladder out and went up on my roof with my cell phone with a signal strength app meter and walked around the roof looking to see if the signal from Tom’s place was strong enough to use a signal extender on the roof. I thought it would work for the yard quite well, but then I wouldn’t get any signal into the house because of the metal roof.

After thinking about that, I went on the internet to see what was available in signal extenders and ordered one up.

Of course now I will have to build something up on the roof top to keep the unit out of the weather, as it’s not weather proof, but I have some ideas on that.

Nice day except for Barry falling over on his bike.