But first, I noticed the box trap was set off last night and I thought I’d caught the other fox and was going to let it go, so I did,…….But.

It ran out of the trap fast and it didn’t look like a fox, maybe a bobcat? I couldn’t tell as I was messing with the camera and didn’t expect it to take off so fast. It just didn’t have that big bushy tail of a fox. 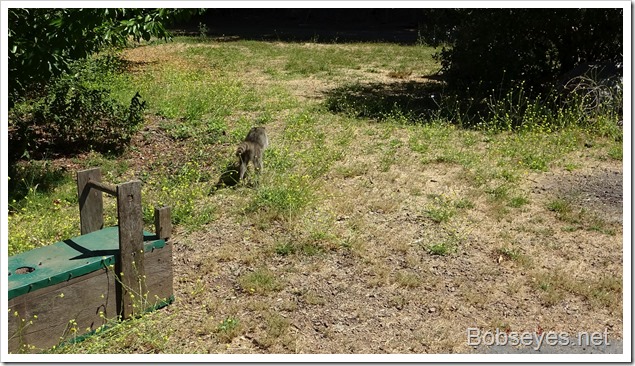 But before I opened the trap door, I took a couple of pictures into the dark trap that was too low for me to see into thinking it was the fox. I didn’t get a chance to have a look at those photos until tonight. 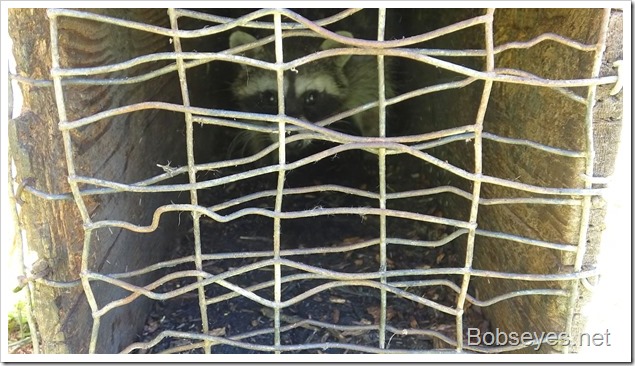 That was my plan for the day, so I left just after noon and headed for Jenner deciding to drive down to the overlook just past town, here, to  have a look at the mouth area and  maybe shoot some video clips. 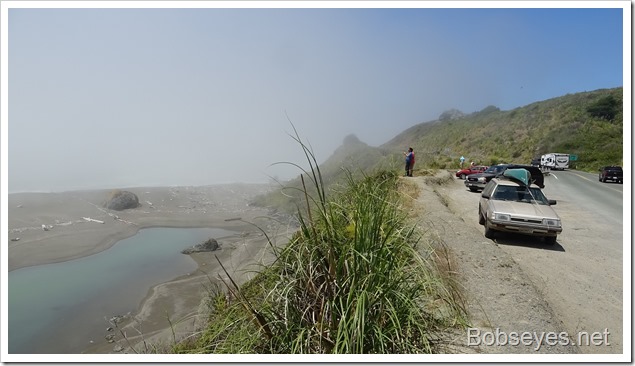 It was real scenic with the fog rolling in over the river’s mouth, looking out over the ocean. The tide was coming into the river and that’s the foam off of the ocean coming in with the salt water. Lots of harbor seals down there on the beach too. 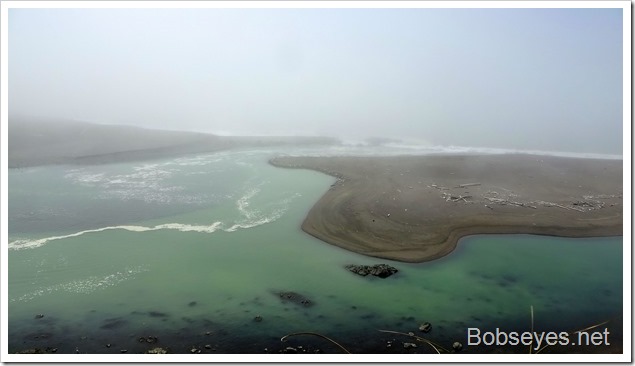 With the fog, it wasn’t a good time to shoot video clips. I headed back to the Jenner boat ramp and put my boat in the water.

Once in the boat I headed slowly up the river along this edge. 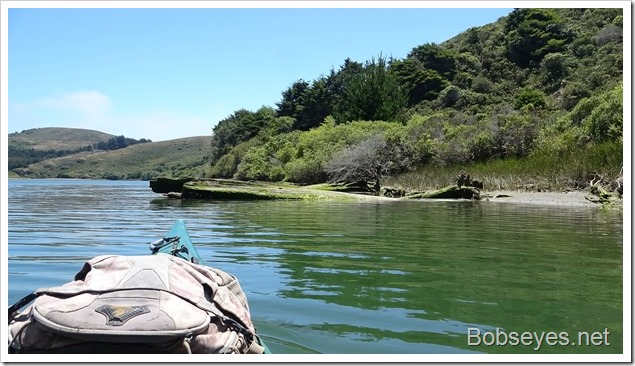 As I went, I could see these critters across the river from me. 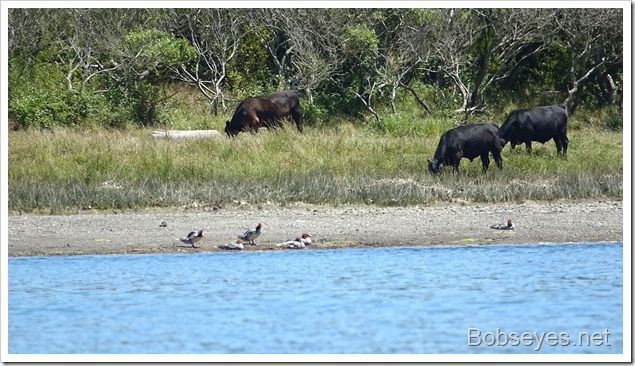 I was only going as far as that rock up ahead where I’d sit in my boat watching and enjoying the day which I did. 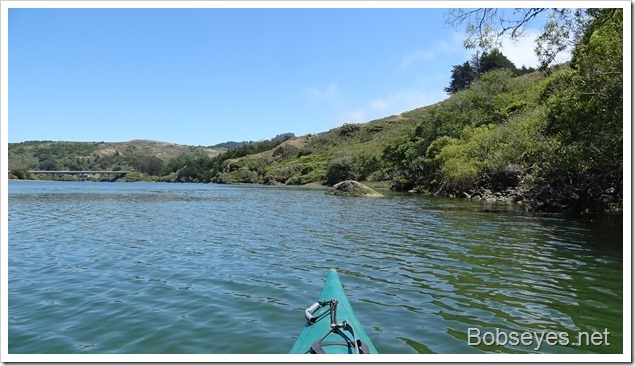 After a good while there, I turned and headed back down the river to this spot I call Swamp Rock trail head and landed my boat for a short hike to, what else, Swamp Rock, just a short distance across the now hopefully dry swamp. 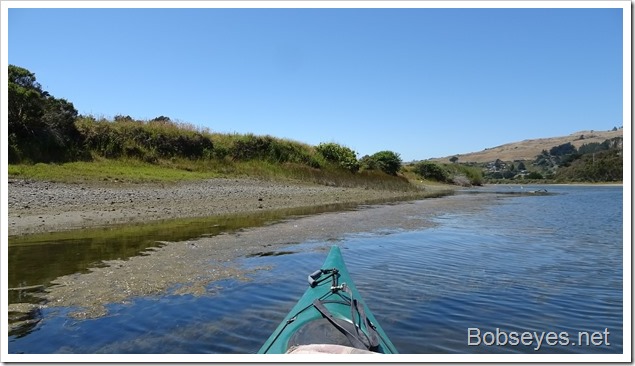 Knowing where the trails  are

Like most everywhere down here one must know where the old game trails are or you won’t get far because of all the brush.

I’m headed across the now dried up swamp to the rock on the hillside. The trail is a bit overgrown so I had to hunt around a bit. 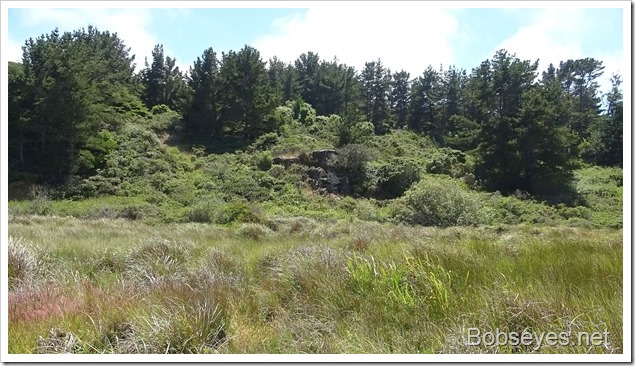 I’m working my way up to that rock where I have a sitting spot just in front of it in the rocks. 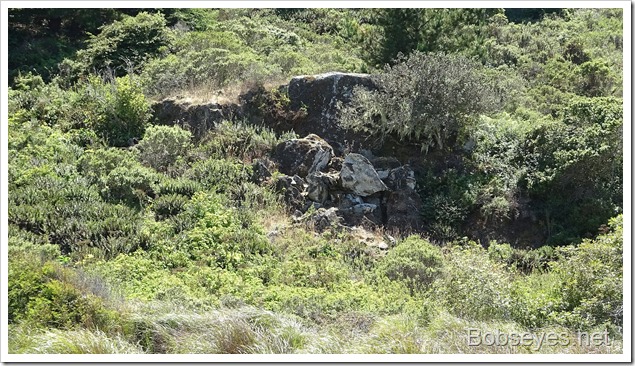 This is the part of the swamp that usually has water in it from the rains, but it hasn’t rained for awhile now so it’s nice and dry. 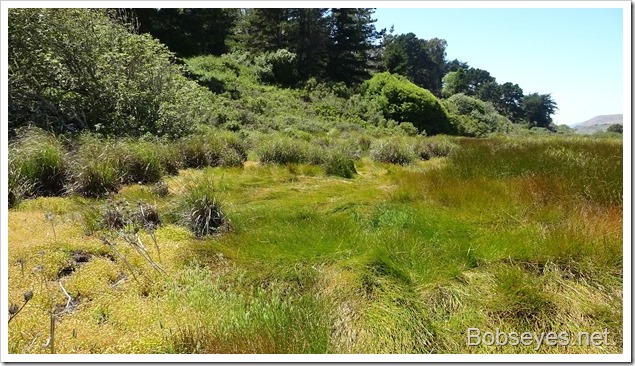 I made it up to the rocks and this is looking down to the town of Jenner which is across the river from here. It’s also nice that the fog stayed down by the ocean and didn’t come in and up the river. 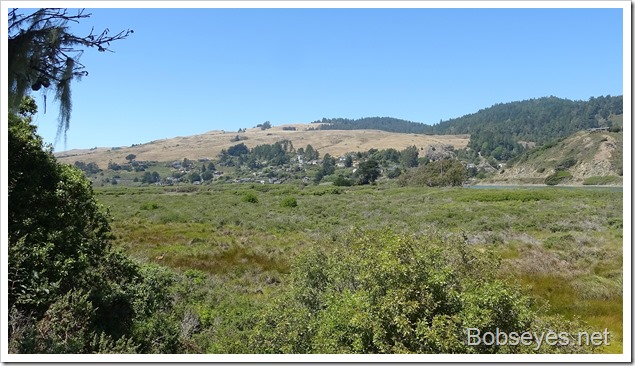 This view from the rock shows the area I had to hike through from the river to get to the rock. There’s only one trail through the grasses and brush that I know about or I wouldn’t of made it to this spot. Some times on the way back I have to hunt for that trail just to get out of this place. 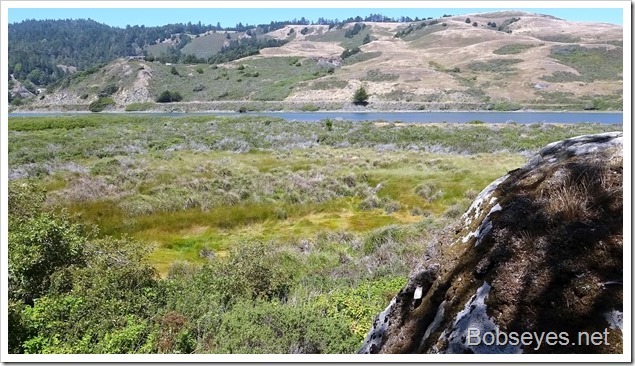 I made it back to my boat where I usually sit in the grass in front of it resting up from my hike, before heading in for the day. 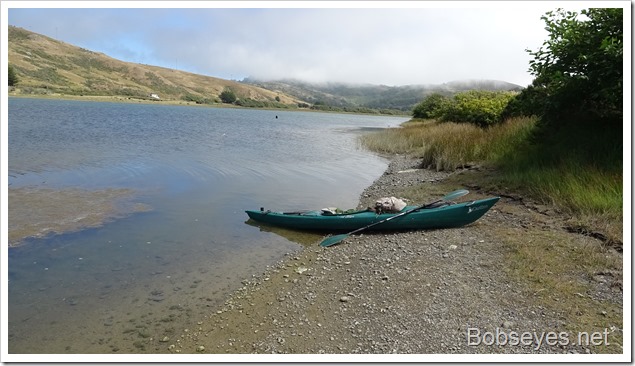