No Ice Cream, a Hike and a Funny Tale In the Park

Visiting and no ice Cream

I had an urge for some ice cream so I drove to town to see about getting some.

With my corn problem there’s only one I can eat, Tillamook chocolate. It seems everyone else likes that one and lots of times they are out of it. They had lots of the other kinds but I was out of luck.

On the way home I decided to go visit John S. and found  him home and his son too. I wanted to talk to his son about getting a quarter of grass fed beef the next time I needed some. He’s been doing butcher work on the side and was interested in helping me out when I next needed some, so that was good. I did some visiting with him and then he took off and I visited with his dad for a spell and then drove on home with no ice cream. :O(

Sometimes I think it’s just as well, no ice cream, because I’m a pig and eat the whole container. I like to eat it as it warms, eating the warmer parts around the sides of the container with a spoon. It always seems to disappear before I can stop, at least most of the time.

A hike in the park

I’ve been thinking I need to go on a hike up into Armstrong Redwood State Reserve as I had a place I hadn’t hike in, since I was a teenager, a place where no one else usually goes as there’s no trail anymore and there was barely one left when I hiked it long ago.

Around 4, I walked out my gate and headed up the road a short distance to the park entrance. 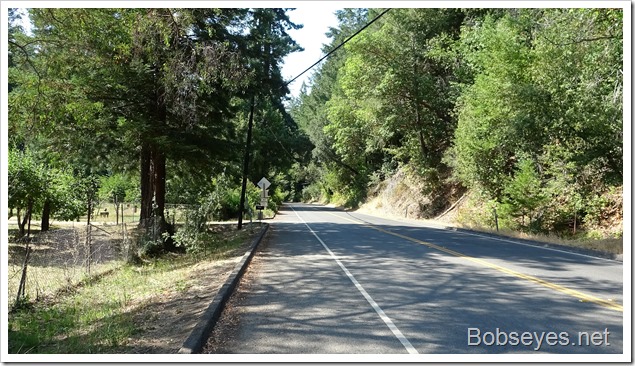 There’s not as  many people in the park late in the day so it was a good time to go.

I walked on by this area and on up the road into the park. 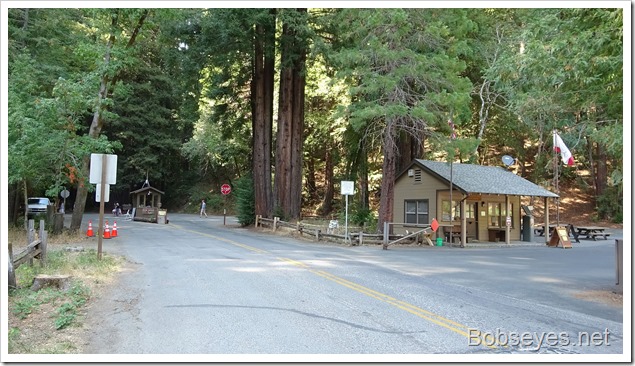 I noticed they had recently installed a new fence along the road. 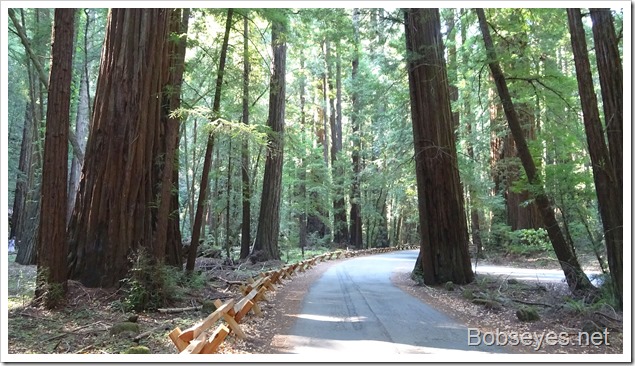 Headed to the Forest Theater

I’m headed for the forest theater, just a little ways up this road, through the big trees. 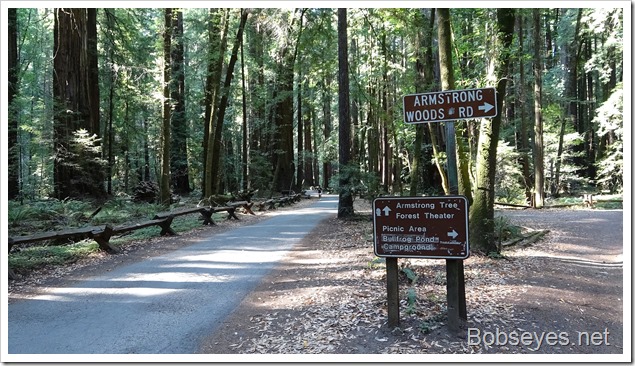 This bridge across the creek is appropriately made out of redwood lumber. The forest theater is just up ahead a short distance. 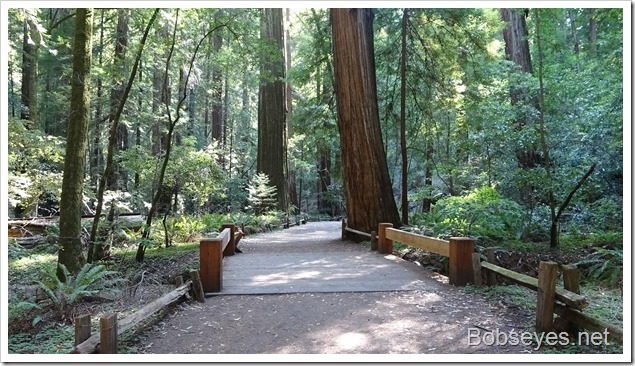 I remember this spot

I remember this spot well as a long time ago when I was a wee cub scout I handed out programs here as people came in to enjoy the live big band playing at the outdoor theater. I think I was paid a dollar for that deed. 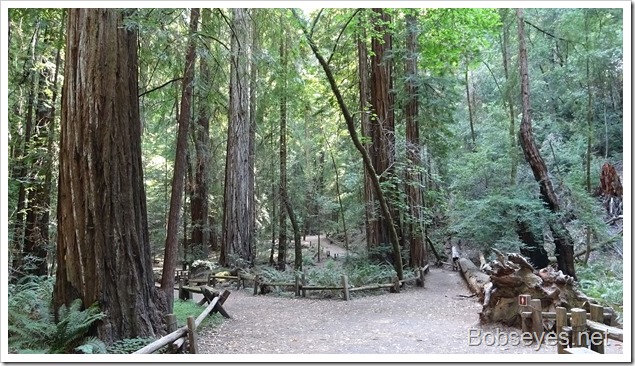 Being back there handing out programs, I didn’t really know what was going on here with the big band and all the people sitting on the benches. That guy there has the right idea. 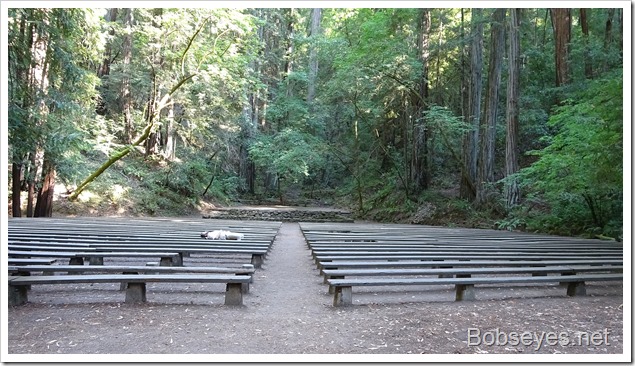 I thought I did good

Some time near the last day of their performances for the summer I’d heard they let someone from the spectators come up onto the stage and lead the band for a bit. Being a little boy, I thought the idea was to see if the band can keep up with your lead or not, big mistake. I thought I could mess them up so I asked to let me try it and of course show casing a little cub scout doing a good deed handing out programs was just good showmanship so I got my chance. Remember I was always out front on the trail so I didn’t really know what was going on and I wasn’t real smart at that age, more into mischief. :O)

Anyway they got me up on this stage with the big band and gave me the little stick and I proceeded to try and mess up the band. I did a good job of it. :O) I’d wave that little stick in the air real fast and then real slow, repeating that over and over. Well, that band gave up in a short time and quit playing. I won, I thought.  The crowd was having a real good roaring laugh and no one said I did bad but I went on back to my handout spot. I think the crowd just thought it was part of the entertainment. :O) Eventually I figured it out, but it was all good. Sometimes it’s nice to be a little boy scout.

They discontinued the band up there after that year, through no fault of mine.

The forest theater stage looking about the same today as it used to look when I was a kid. 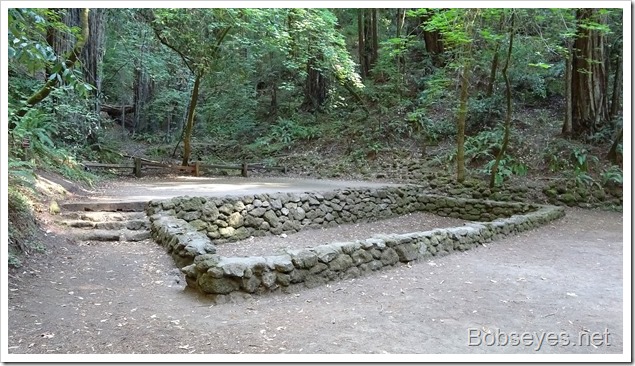 The view from the stage. Us kids used to run across the tops of all those wooden benches as fast as we could. No one ever missed but some of the tourists were a bit concerned that we might get hurt. Kid’s stuff, if you survive, it makes one strong. 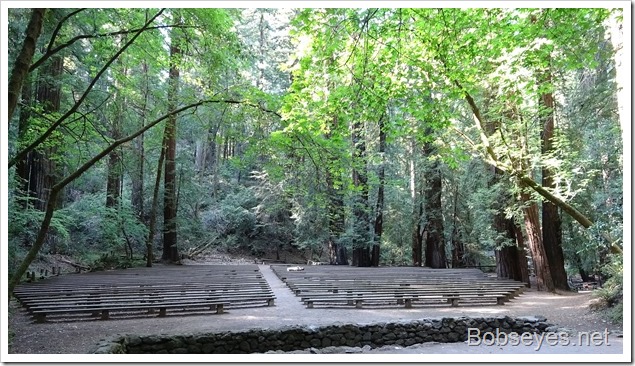 Hike through the forest

Anyway the purpose of coming up to this spot is I wanted to hike up the hill from here through the forest and come out on our property.

I picked the route I thought might get me there and started out through the trees and the brush as the trail is long gone. 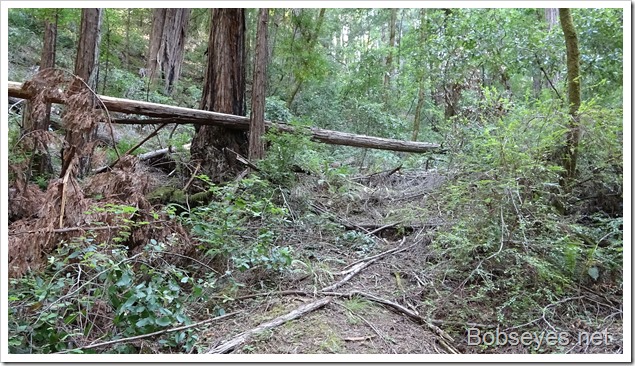 It was fairly steep going all the way up to the top where our property is and it wore me out  going up.

But the forest was real nice with lots of big ferns. 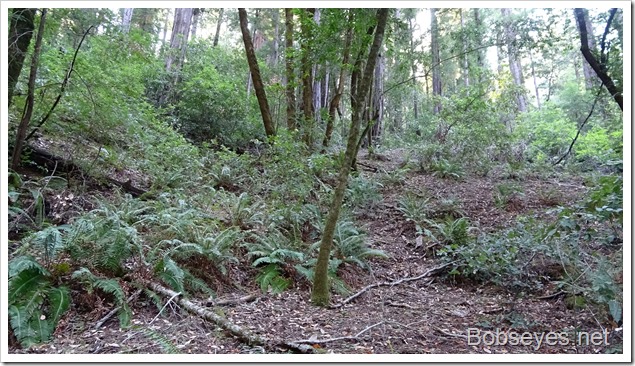 Fortunate it was all down hill

Eventually I made it to the ridge top and wasn’t sure where I was until I walked the ridge a bit and found out I was on the old animal trail and a bit beat by now, but from here it was all down hill.

Even going down hill was a bit difficult as my legs and feet were beat. I made it down to one of our roads and things got a bit easier. 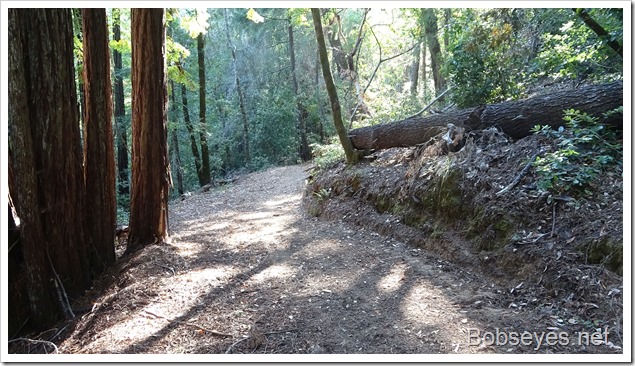 I got off the road at the bottom of the hill as I wanted to check out this creek so I went down it a ways until I ran into some downed trees blocking my way, so back up on the road for me. 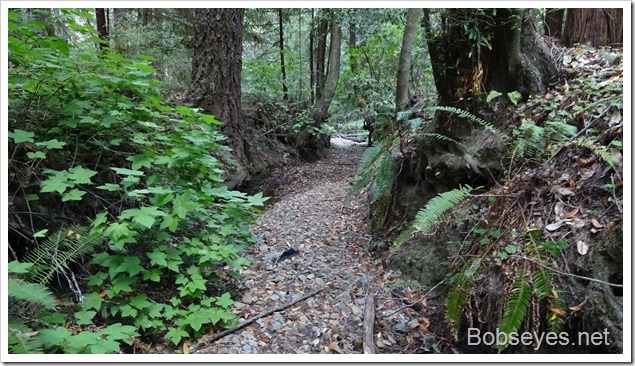 My legs and feet were very happy to be home. I did some chair hopping to rest up a bit.

This hen has two little chicks. She was the first to hatch some out this year, but I’ve been having some trouble with her as she doesn’t want to stay in her nesting box at night and has been invading another hen that is sitting on eggs, kicking her out.

I tried moving her nest box around and it helped a little.

But last night I saw her up on the roost and I figure it was too high up for the little chicks to get too, so they’d have no protection at night from things like rats. I was hoping her little peeps where in with another hen on the ground.

I was thinking of putting her out with the other chickens and give the chicks to another hen with younger peeps as I figured that’s were they were spending the night anyway……….but.

But tonight when I went out to check on them just before dark, I noticed something.

Can you see the two little peeps? Somehow they got way up on the roost with her, so all is good. 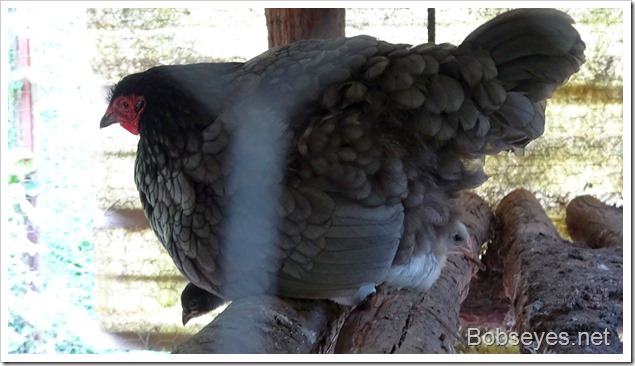 3 Responses to No Ice Cream, a Hike and a Funny Tale In the Park