Yakking up the river

Since I paddled down river yesterday and checked out the closed river’s mouth I decided to go up river today and see what’s going on up that way.

I put the boat in the water and paddled across the river to Penny island on the upper end and sat for a bit. The fog was trying to come in so up river was the way to go. 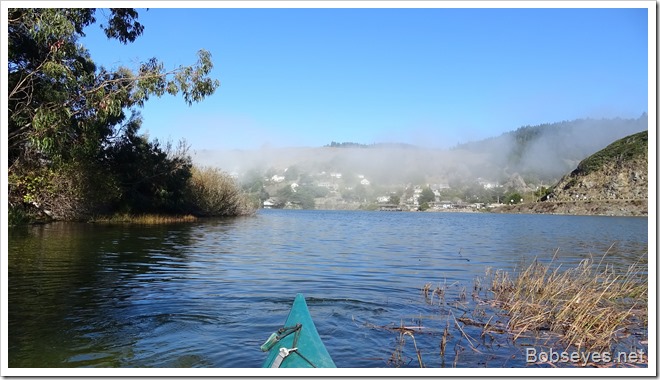 So up river I paddled looking like this. Some ducks in front there. 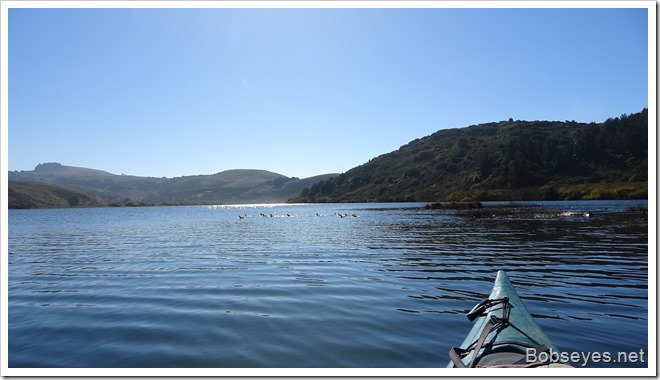 Is that river otters

I was sitting along the side watching things when I heard a big splash behind me. I looked back but saw nothing but was thinking there must be some otters close by so I paddled out and away for a bit and watched until I spotted the river otters and noted which way they were moving so I could find them when I lost them. So I followed them and watched what they were doing.

The otters pulled out on this rock as I was following them. They were fishing but pulled up for a break. 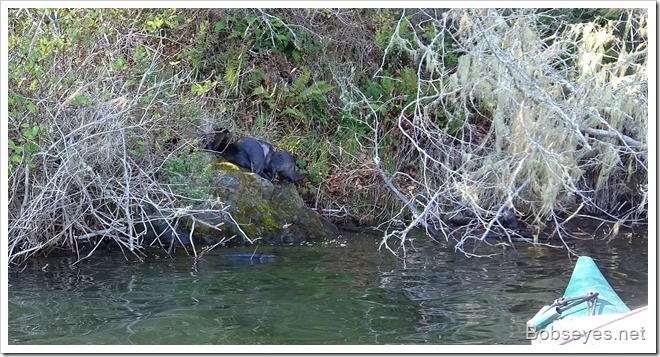 There’s four of them doing a bit of preening. 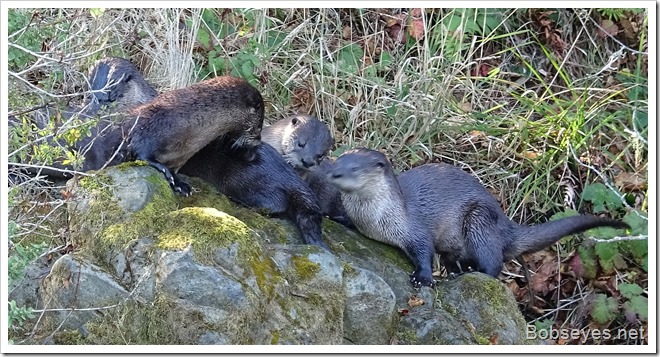 I moved off and left them doing their thing and found another place to pull in by the shore and watch. I could see a bunch of geese on the shore across the river. 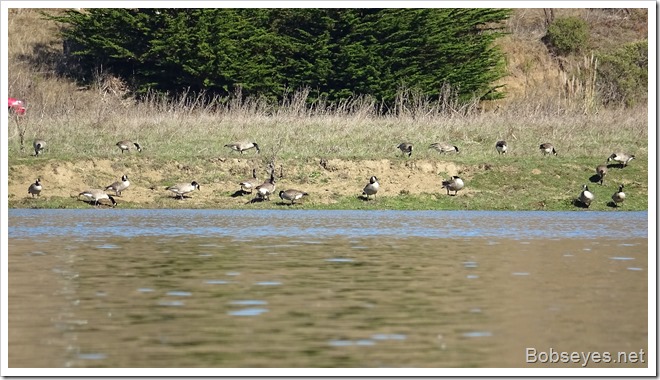 I noticed this big bird a bit earlier swimming around by itself. I’d never seen this bird down here before. I think it’s some kind of swan. I saw it again later on the upper end of the island and got quite close without it flying off, but it was behind some grass so none of my pics looked very good on that encounter. I was less than twenty feet from it which is quite close for a wild bird not to take off. 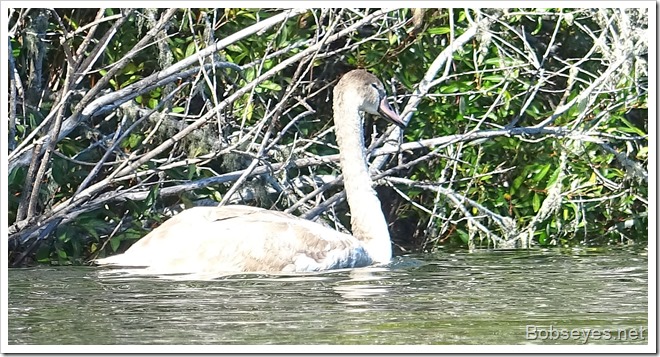 I saw some birds on a log across the river so I went over to have a look. Some cormorants and a merganser duck. 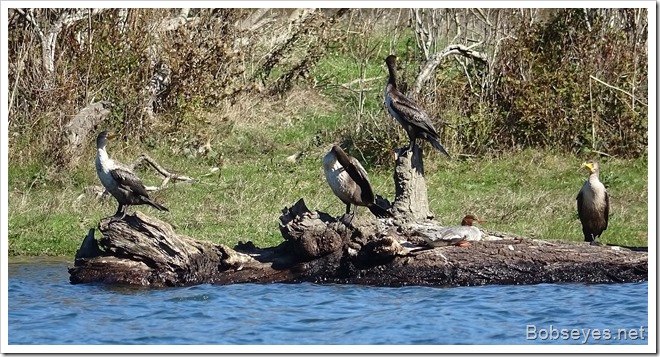 Lots of boats and people

About an hour earlier, about noon,  I saw three or four canoe trailers and trucks go by so I knew about fifty canoes and kayaks would be coming done the river soon and here’s the first of them. I decided to paddle and stay ahead of them and maybe head down to the river’s mouth as I knew they’d be quite noisy and they’d also plug up the boat ramp when they got out. 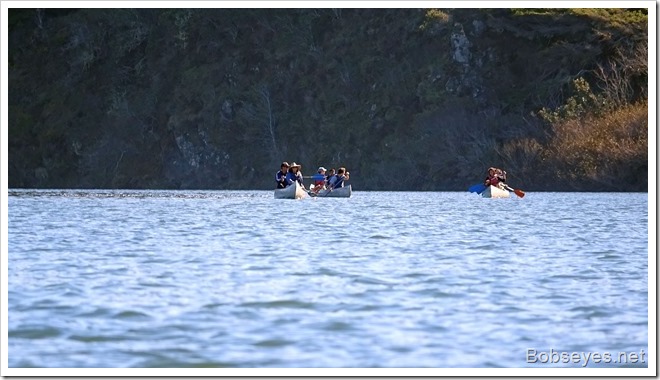 They headed to the ocean

I watched them to see which way they were going. They started down the backside of Penny island which meant they were gong down to the ocean and stop for awhile before going to the boat ramp, at least an hour or two.

So as I was paddling by the boat ramp I decided to quit early today to avoid them so headed to the ramp. But when I got to the ramp I found they were blocking it with their boat trailers so I paddled on up to the ramp and shouted,…. Is there a boss up there?

By now it was around 1PM and they’d been here for about an hour.

Here’s the ramp after I laid into them and they moved one of their rigs. 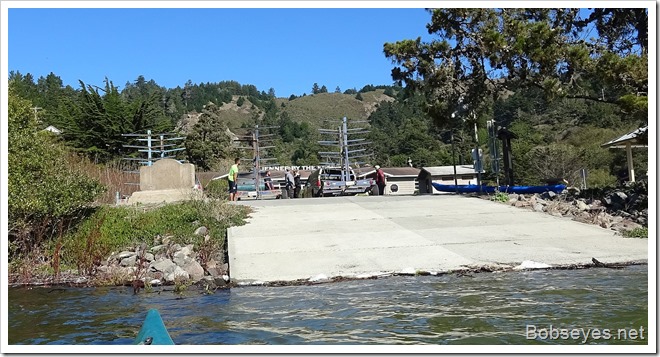 So the boss or at least a lady comes down the ramp and I say it’s not polite to block the boat ramp, especially being outsiders. They say their boats are coming any time which I know to be a lie which I don’t appreciate as it would take much longer than that to come back from the ocean where they were going.

I try to explain to the lady but she she is yakking on not listening to me going a mile a minute. After a bit I tell her to hold it and she stops her yakking,. I tell her that I yak down here all the time and am willing to share with them, but they need to be considerate and not block the ramp except when absolutely necessary. About that time another car pulls in with a yak and has to park to the side as the ramp is blocked. She yaks on some more not getting it, but her guys do and start moving one of the trucks.

She finally starts to give in and says something about needing to be there and I tell her the final word. The loading zone sign says ten minute limit and they’ve been there for over an hour which I didn’t mention. She walks off.

I’m headed to the mouth to cool down

So instead of pulling out I decided to paddle on down to the river’s mouth to let my adrenalin subside. I really did well and didn’t shout or get mad but it still gets me going.

Here’s my view as I head down to the mouth area. See that big wave coming over the jetty. Watch were this guy is a bit later on as this wave would have wiped him out. 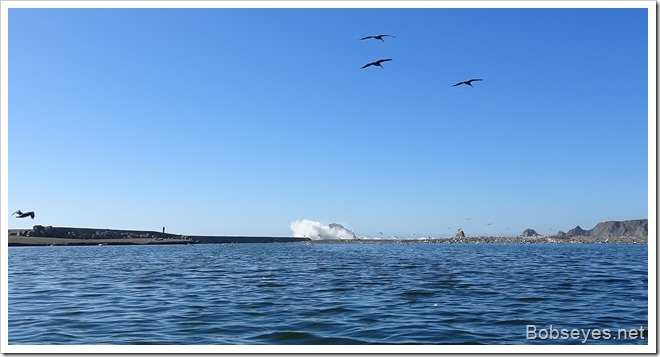 I could see the canoes pulling in on the sandy beach by the restrooms up the beach a ways so I knew they wouldn’t be at the boat ramp for quite some time.

In the mean time I checked out some of the wild life down here. There’s lots of birds and some harbor seals too on the beach. 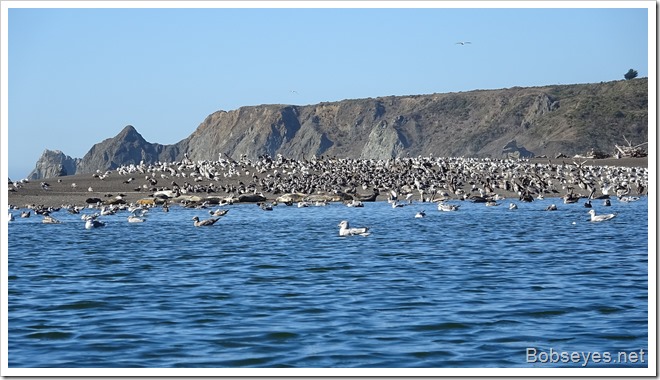 There’s some of the harbor seals resting there with the birds. 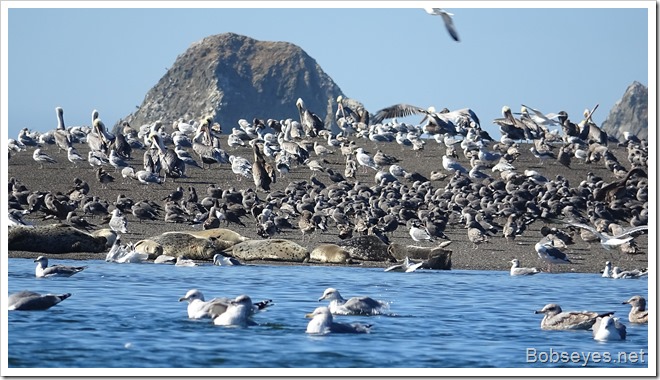 A peaceful place at the end of the river

I continued paddling down to Haystack Rock and sat here in this peaceful spot and took it easy. 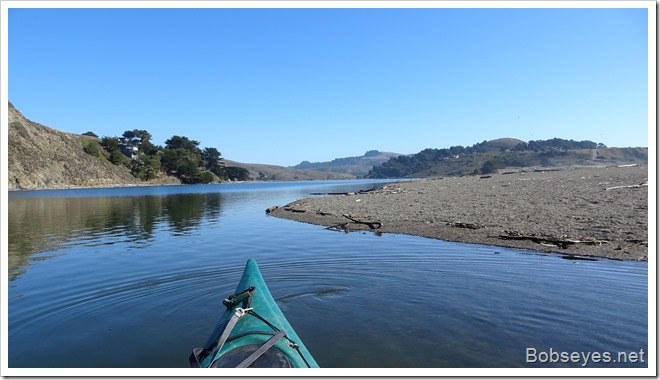 After a good long while I started back to the mouth area where I went by these pelicans. 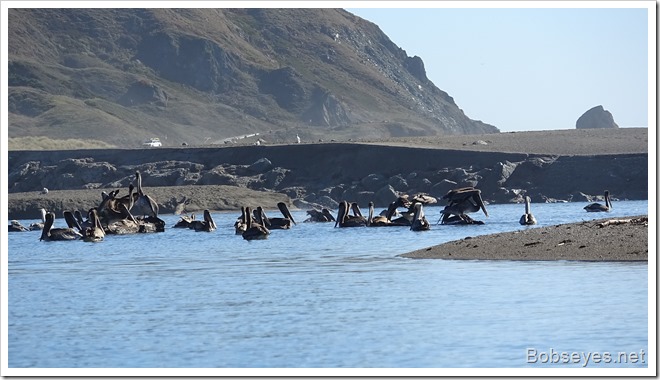 Guy on the jetty

As I pulled away I turned around and looked back and could see this guy out on the jetty so I checked him out. 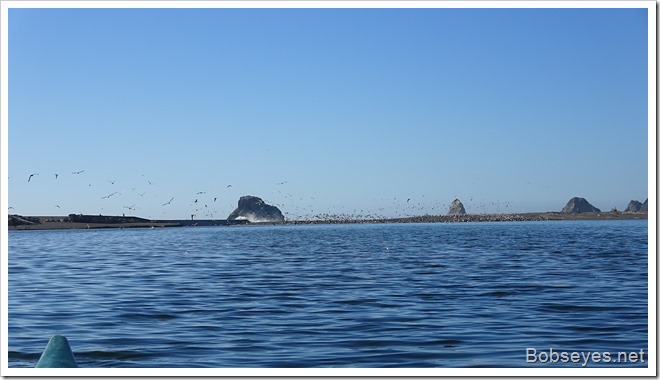 If this guy was here earlier he would of gotten washed into the rocks and likely gotten seriously hurt as he’s in a very dangerous place for a sleeper wave to get him. One didn’t but one gave him warning and he moved off. 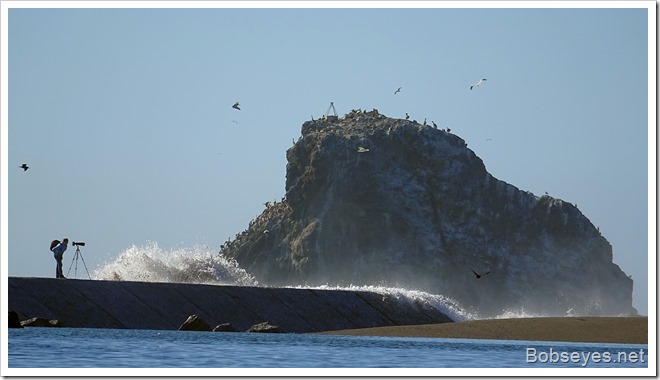 They are still waiting at the boat ramp

It was almost 4PM now so I paddled back near the boat ramp to check things out. The boats on the beach had just pulled out and were headed to the boat ramp to pull out so I knew I wasn’t going to get out now for a bit so I watched. About 4:10 they started loading their boats and left by 4:30. Let’s see, 12 to 4:30 about 4 and a half hours in a ten minute loading zone. It’s really worst than that as there is very little parking in this parking lot and they took up the spot most of the day. I watched them leave as I wanted to be sure which company they were. Turns out it was River’s Edge from Healdsburg. I think they need to learn some boat ramp etiquette as there are other people in this world using the boat ramp and parking lot besides them.

Here they are waiting for their boats to arrive. 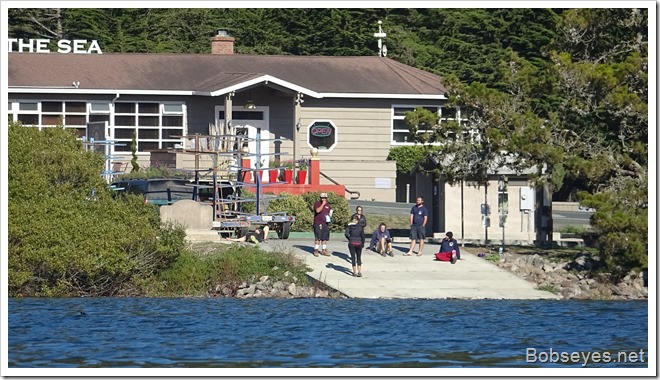 So after they had pulled out I landed my boat and put my boat on my car. I looked around a bit and noticed how much paper and stuff was laying around from them. They are pigs as there was stuff all over where they worked. John our main trash picker upper has been ill and had mentioned to me before that these people messed things up big time and he wasn’t happy about it. But now he was too ill to pick up after them. You would think an outdoors type company would pick up after themselves after making a mess.

Oh well, the state employees will pick it all up.

Anyway, just reporting on the goings on. Had a nice day paddling around, even with the intrusion.