I was off to Jenner this morning to kayak for the day. The sun was out with a bit of a breeze when I arrived. The breeze calmed down a bit later for a nice day.

I put the boat in the water and paddled across the river and headed on up along here. 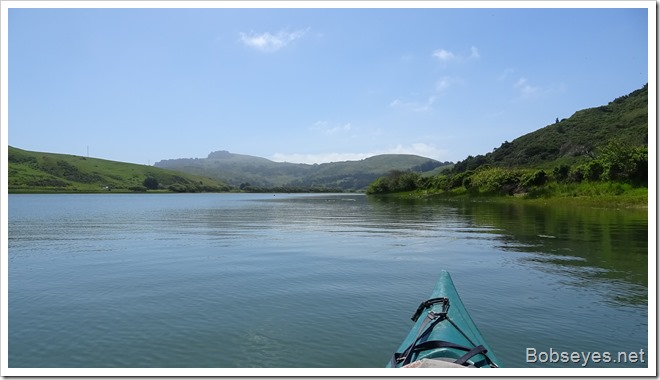 I thought I saw a new big nest in this big tree and while I was inspecting it I spotted this young bald eagle up in the tree. 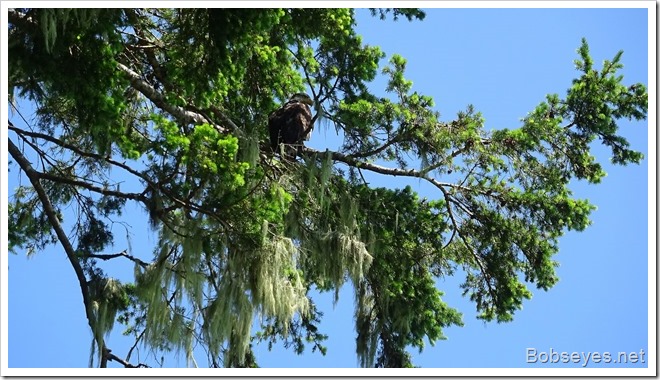 I don’t know if it was making the nest but I will keep an eye on it and see if I can find out which bird is making that nest. If it’s an eagle’s nest it will be the first one I know of in this area.

The bird flew off shortly after this shot. 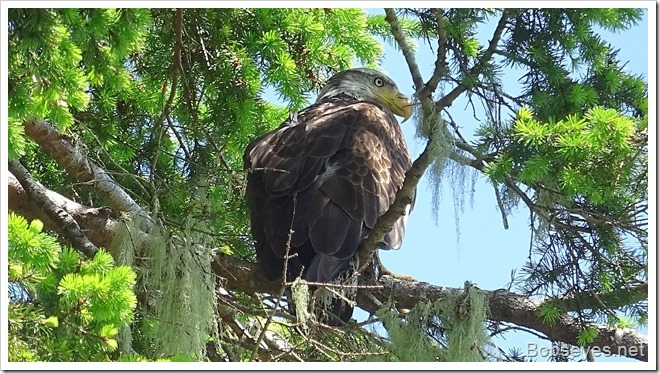 I could hear a helicopter up ahead doing something so I watched to see what it was up to as it stayed in the area for a long time. It appeared the power company is using it to work on those high power lines. 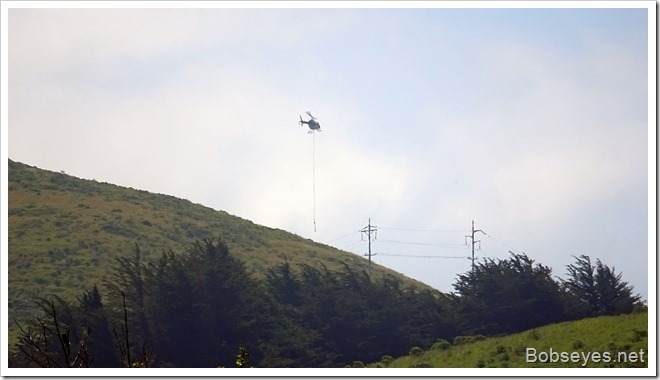 I went up the river about a mile taking it easy then turned around and came back to this spot I call Swamp rock trailhead as the trail goes across a swamp to that big rock on the hill about in the middle of the pic. I will land and try to hike over to the rock if the swamp is dried up enough. 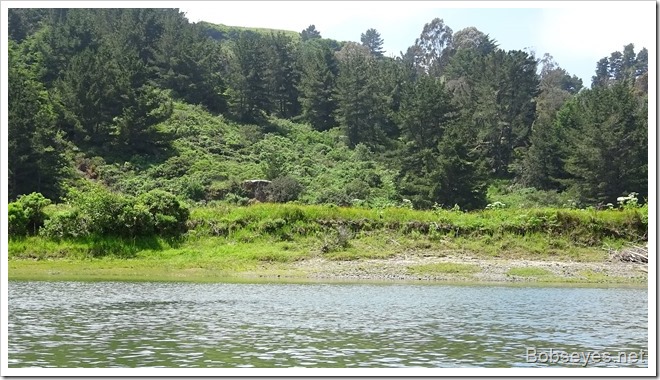 I landed here and tied up my boat. 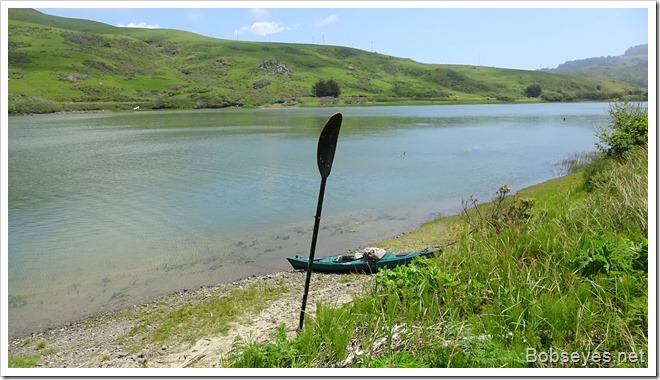 I saw something move at my feet as I got out of my boat which turned out to be this small toad, about an inch long. I know it wouldn’t last long on the river down here so I took it with me back towards the swamp area as I started out on my hike. I let it go back in the grass. 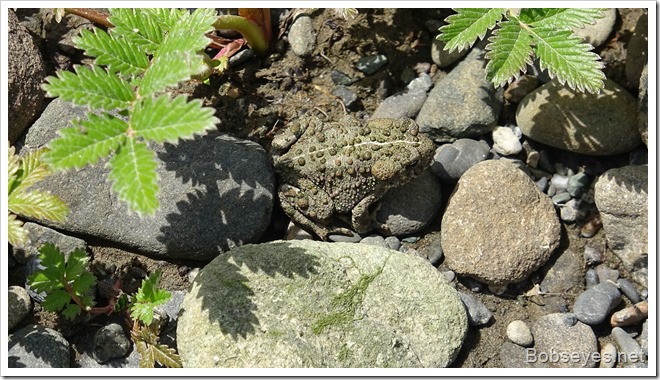 I wasn’t expecting any berries yet and I was surprised to find some of these salmon berries. They aren’t the best berries but when that’s all there is they’re pretty good. 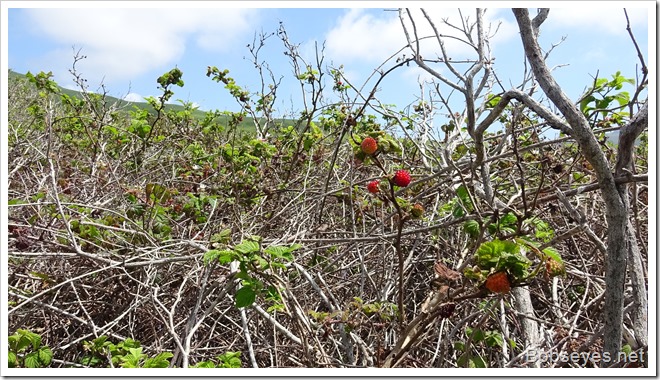 You can see the rock over on the hill there and you can see there’s still too much water in the swamp to get to the rock so I didn’t get to it. 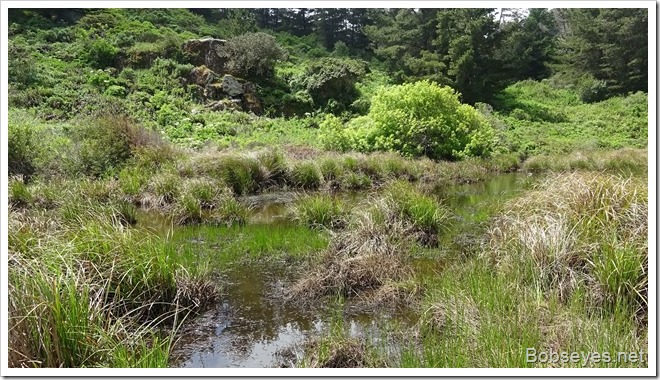 I headed back through here to the boat. 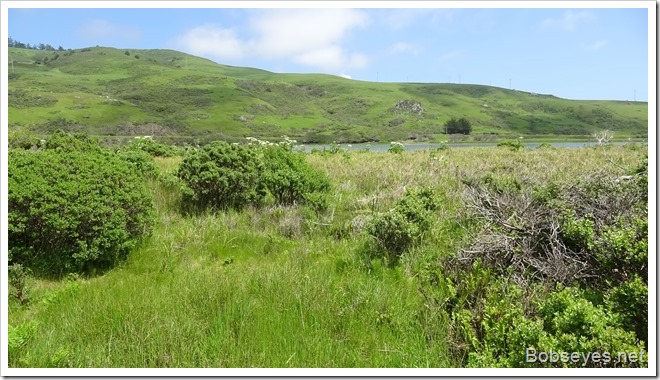 I got back in my boat and paddled down the islands back channel headed for the river’s mouth at the ocean.

I went by this pup seal with it’s mom and the brown pelican and seagulls. 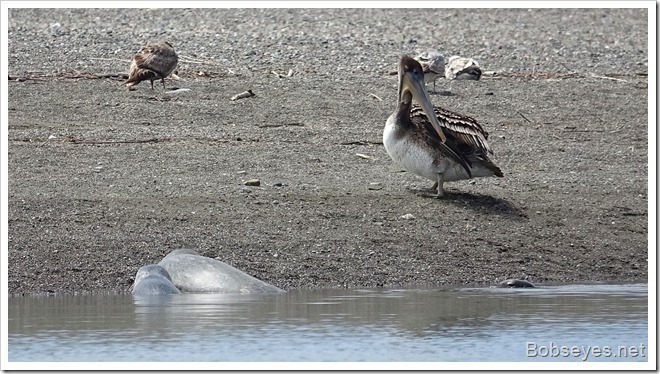 I was  making my way to the open river’s mouth just up ahead looking out into the ocean.

These two geese were having some kind of disagreement and were making a lot of racket. They flew off. 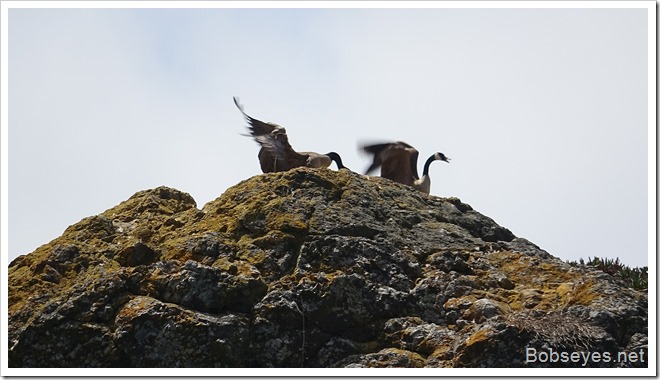 I paddled into the open river’s mouth and stopped at this spot to check things out for a bit. Lots of harbor seals over there on the sand taking it easy as the ocean waves come pounding in. 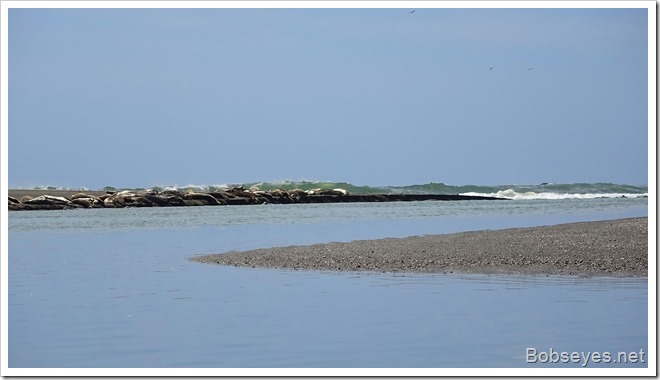 After a bit I headed on in for the day and went on home. Nice paddle.

Yesterday after I wore myself out on that hike up the hill I forgot to shut the chicken pen gate last night so the gate was open this morning and the chickens got out first light and were grazing while I was still cutting z’s.

After thinking about that a bit I decided it’d be good if the chickens could get out to graze first thing in the morning so they’d eat more wild grasses and stuff instead of eating all the seed I have to buy for them.

So that meant I needed some way to get the gate open at day break and I wanted to keep it simple. So I sat down and thought about it for awhile on and off and came up with an idea.

I want this gate to open at daylight to let the chickens out of the pen. I got an old paint can to use as a weight and some rope and a pulley and set this thing up. You can see the paint can hanging back there. 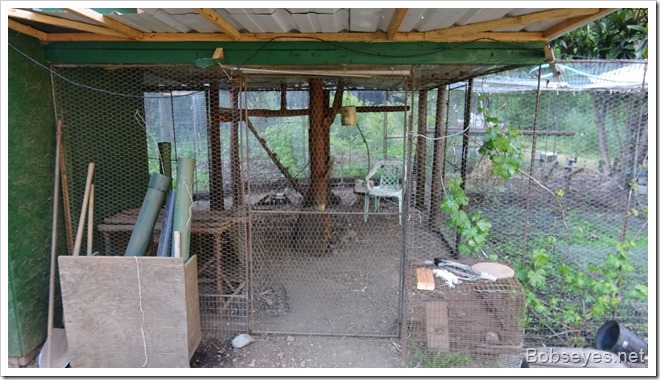 Here’s the paint can with a rock in it hooked to a rope that goes to the gate trying to pull it open. 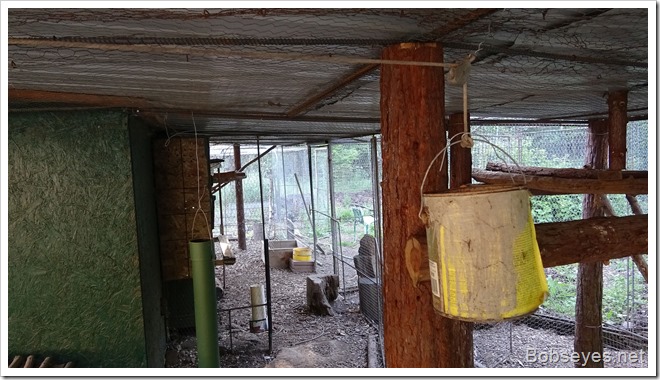 A latch the chickens can operate

I needed some kind of latch the chickens could open so I got this little board and drilled a hole in it and added a steel wire. The chickens step on the board which pulls the wire and opens the gate. 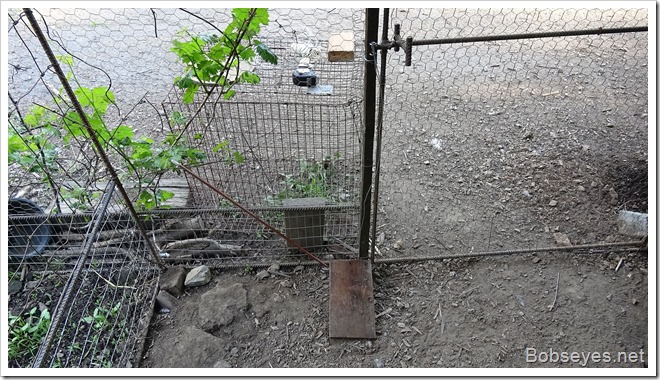 The end of the wire on the board goes through these two eyes. When the board is stepped on it pulls the wire out of the eyes and the paint can pulls the gate open and the chickens can get out. 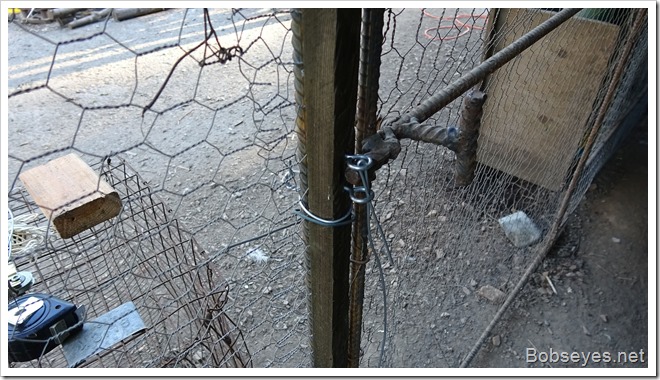 After I set it up to test it out the chickens had no trouble opening the gate, not that they were trying but all the running around they do didn’t take one long to step on the board. I’ll try to figure out a way to tidy that up a bit but for now it’s in test mode.

So far I have three new baby chicks. I’m giving momma hen another day or so to see if she can hatch anymore eggs.

But in the mean time the little chicks and momma keep turning over their food dish and scattering feed on the ground in their little cage which brings the rats in at night.

You’d think they were starving

So to remedy that I took the cage out for a bit and let the chickens eat what was there. There must have been more there than I thought the way they went at it. 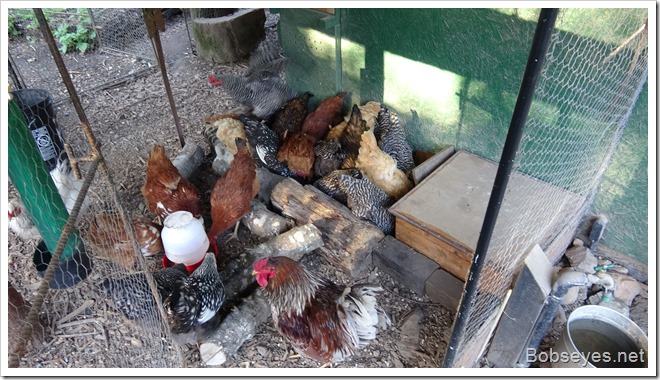 I plan to put some heavy weights in their dishes so they can’t turn them over so easily. That should do it.

Not so good squash plants

And lastly today I planted about a dozen little squash plants, three kinds I got from my brother Tom. They weren’t doing too good so I’m hoping getting them into the ground might help them recover.

That pretty much wraps up my day for a good one.