Nice Big Storm Hits During the Night, Lightning and Thunder and Buckets of Rain

My brother Tom is at the Farmer’s market today doing his selling of vegetables.

That means I  have to get the generator started to keep his walk-in full of vegetables cold. He has a big harvest of potatoes in there he has to keep cold or they will start to sprout.

Likely won’t get power by tonight

With the big storm that hit last night, the power company is real busy today. Our power is supposed to be restored by today at 10PM. But no one has been here so far today  to work on it, so I suspect our power might not get fixed by the scheduled time tonight.

I gassed it up and put some oil in it as it seems to burn a lot of oil. I used the starting fluid to make it easier to pull the starter rope and got it started up then went over to his house to  make sure what needed to be on was and what needed to be off was. 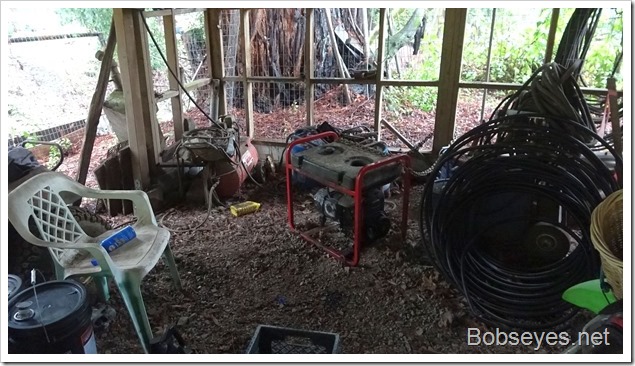 That all taken care of, I gassed and oiled my small chainsaw and headed up into the hills to see what last night’s storm did to things up that way.

Now, last night’s big storm really was a big one, the biggest one in years.

Late at night, it started to rain and then the lightning started with lots of nice rolling thunder. The thunder hits and rolls up and down the valleys in the hills.

Now lightning and thunder are a rare occurrence around here, so it’s always a show.

When the lightning hits, someone dumps the big bucket up there and it pours rain real hard, comes down in buckets so to speak and it did. The hardest it’s rained in a long time around here.

And, that means all that water can do a lot of damage up in the hills. My cousin who lives up on the top of the hills says the wind was real strong up there last night too.

The big winds means the power company was likely back trying to get all the power restored again all over the county.

Anyway, I rode up to this spot and ditched the water off the road from this spring . 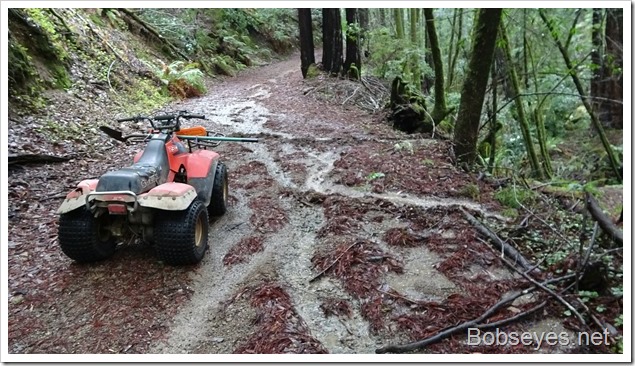 I continued on up  the road and ditched water off the roads where it was necessary. With rains as hard as they were the sticks and leaves flow down the roads and make dams that divert the water down the roads instead of off them. All the roads up  here are what they call, out-sloped, so there are no big ditches down the roads, just little runs that need to be taken care of.

I made it to the top of the hills to the Guerneville overlook. 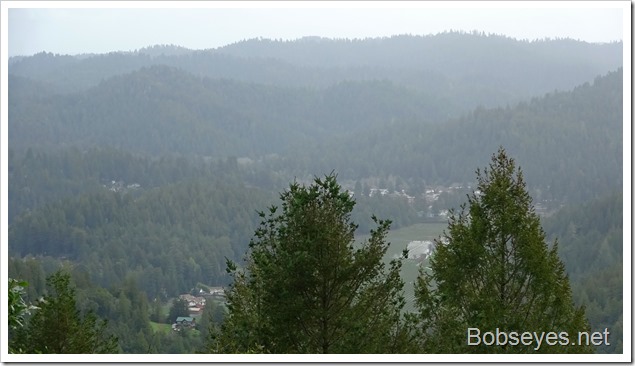 I continued on down the main road up there, headed for my cousin’s place when I ran into this big fir tree across the road. I thought of cutting it with my little chainsaw I had, but thought better of it. I need to bring my big chainsaw up to do it, so I turned around and went another way. 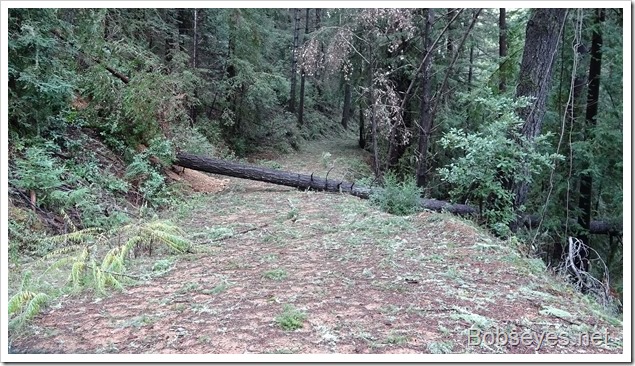 Taking anther route, I ran into these small trees and just cut enough out to get by. This stuff tires me out, so I need to conserve energy if I want to get done what needs to be. 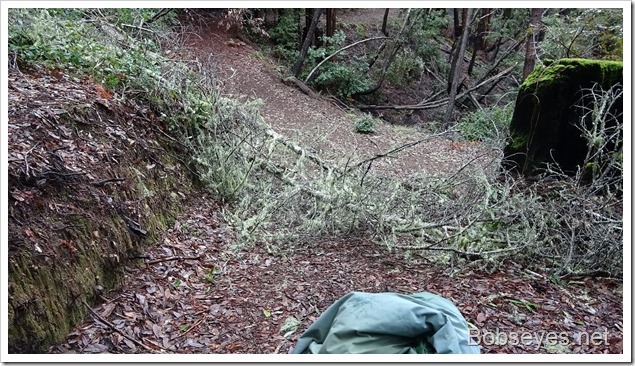 I rode on down to check the other neighbors road out. It was a mess and I met a guy coming up that was working on it, Jim. We shot the bull so much I forgot to get pictures. I then followed him to his house and we shot the bull some more, then I rode on over to my cousin’s place to give them  a report and see how the storm was up there last night.

They said the storm was impressive with lots of lightning and thunder and buckets of rain.

They are on generator power all the time up there so they don’t have a problem with the power companies.

The house that burned

About a week ago a house burned down up in the forest somewhere and a guy burned up during the fire, so I asked whose house burned.

It turned out to be the old Buchanan house. There were three older people living in it in fairly pour health and the older guy was 93. He and his son got out, but the other guy that also stayed with them didn’t make it. My cousin’s husband said he was outside when it happened and he heard a huge KaBoom. Sounds like they may have had a propane leak.

I stayed there longer than I planned shooting the bull. When I left, I headed down this trail to see  how it faired. Pretty good with only a little ditching near the top 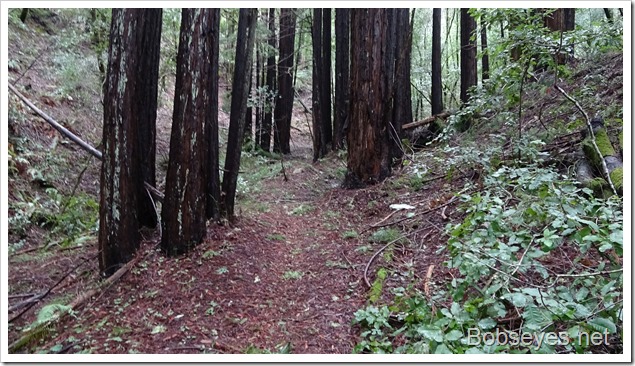 I did stop to throw a lot of redwood limbs off the trail. 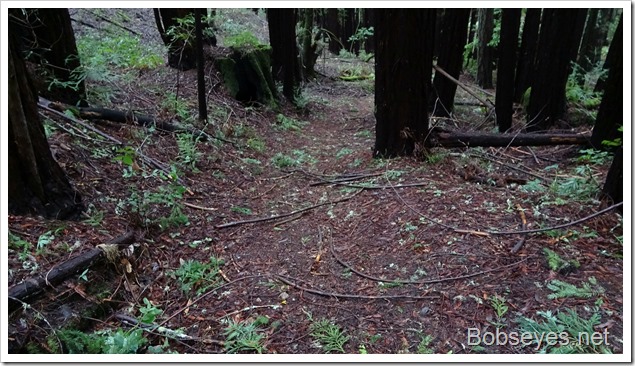 It took me longer than expected to get down that trail as there were a lot of sticks on the trail. At least the water damage was minimal. 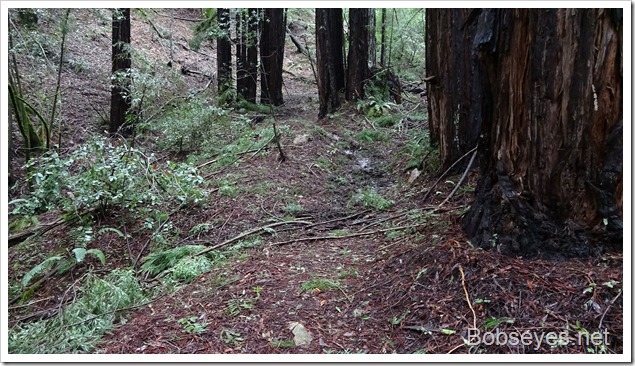 I took a side trail to check on the waterfall. I should of come up here earlier when it was really flowing, but it was slowed down a lot by now. 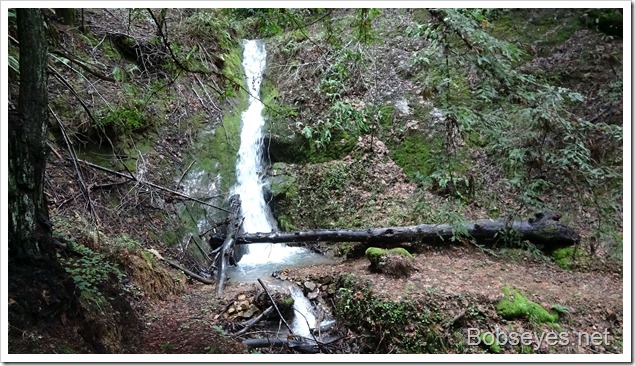 There were more sticks to throw off that trail.

Eventually I got back on the main trail and was almost to the end when I ran into this little log blocking the trail. I got  my feet wet crossing the creek so I could cut it up with the saw as it was water logged and pretty heavy to move. 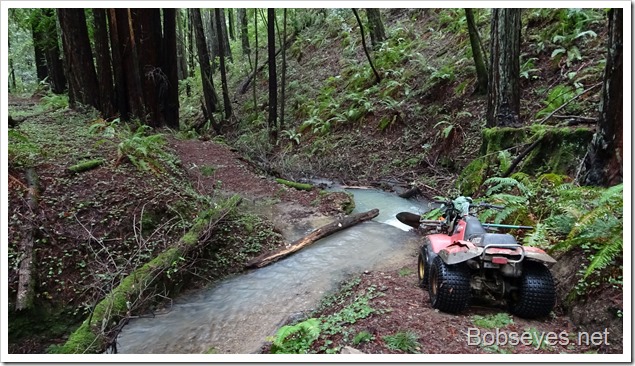 I got that taken care of and that was the last one for the day and I headed on home. 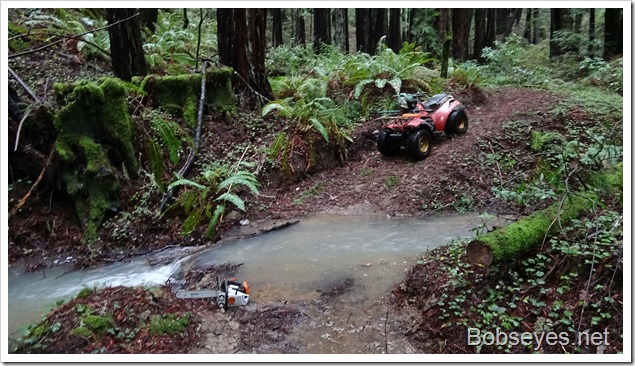 At least I didn’t get real wet today from the rains.

When I got home I checked with my brother about the generator as it was still running. And the power company hadn’t showed up to fix their problem.

4 Responses to Nice Big Storm Hits During the Night, Lightning and Thunder and Buckets of Rain