New Tires and Then Head for the Bureau River in Bureau ID.

I still needed a new tire for the van so we had to head north about 100 miles to a place called Nampa ID. where there were some tire shops with lots of tires. I found a Les Schwab place and made an appointment with the cell phone before I got there.

It took awhile for them to get to my van but they finally did. I decided to get two new tires. One for the messed up one and one to replace my spare as the spare had enough tread for paved roads, but not for rocky roads.

They got the tires off the van and are putting the new ones on the rims. 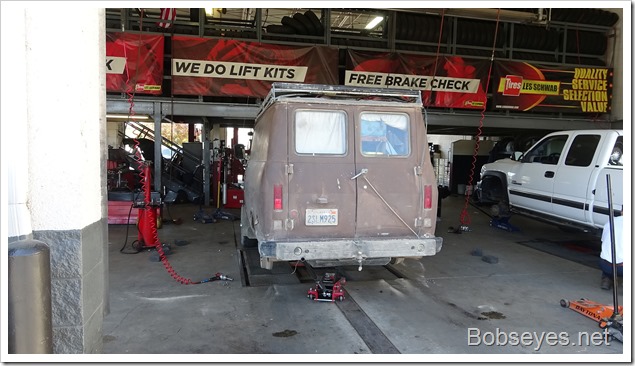 While I was doing that, Marty was hunting around Nampa looking for a new inverter as his died and it runs his refrigerator. He wasn’t having much luck and getting lost a lot, but eventually he showed up again at the tire place so we could take off on the next leg of our trip.

I know a camp spot on the Buneau River by Bureau, Id. that we were headed to, to camp tonight. It was only about an hour away from the tire shop and we were eager to get to camp.

So, we headed off down highway 78 towards Buneau.. 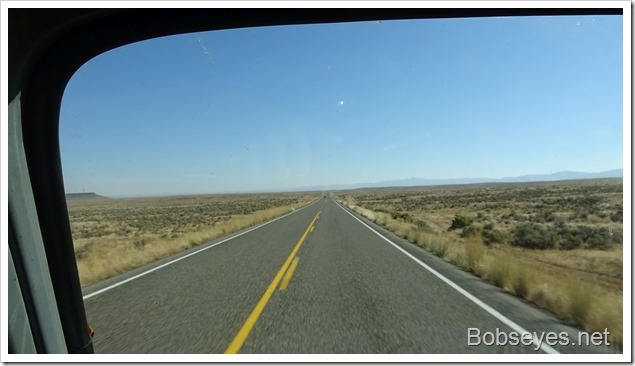 There was lots of farming and ranching in the area. Lots of corn here, likely to feed cattle. 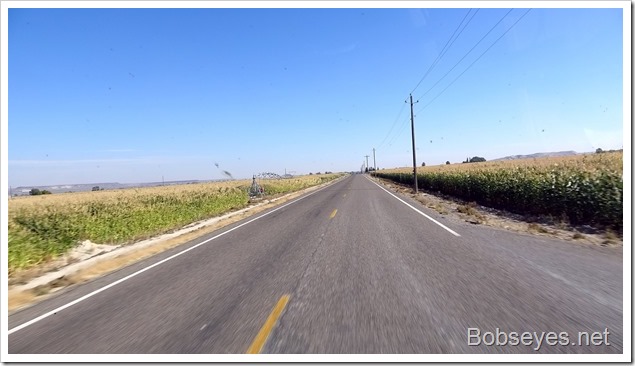 Cattle in an irrigated field. 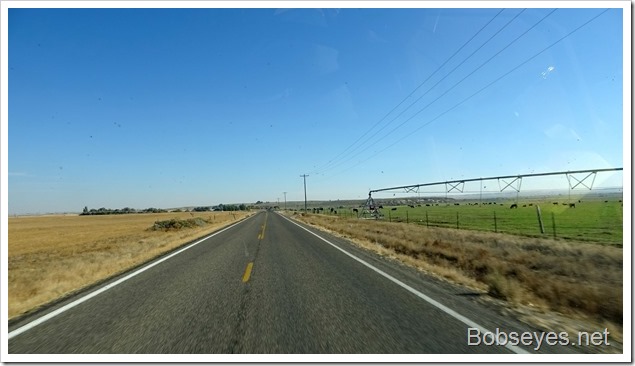 Bureau is down in that valley up ahead with the Snake River on the left. 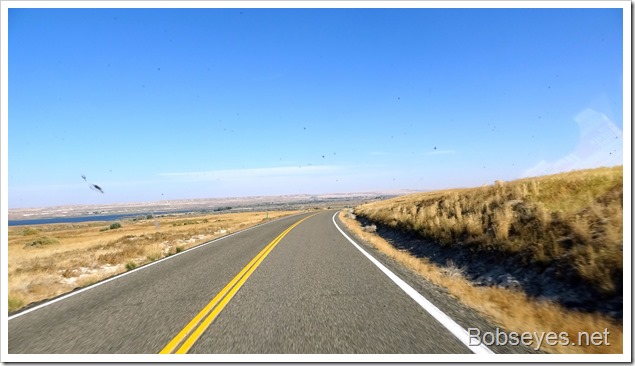 I wasn’t sure what road the camp spot was on so I stopped at the local store to inquire and got shit instead.

I asked if the road across the street, called Hot Springs Road went to the local swimming hole for where the kids swim and said I was going to camp down there. He said, yes, that is the road, but it’s all private property and we can’t camp there. I was pretty sure he was full of it, but didn’t say anything and said thanks and left thinking what a jerk.

Anyway we headed down hot springs road that goes through this farming valley to the Bureau River. 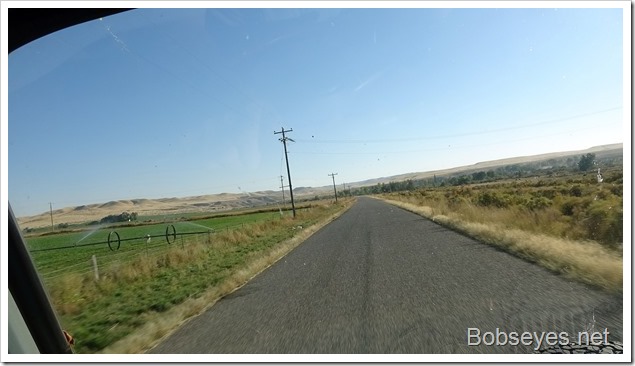 The guy was fool of it

I found the spot and there were no, no trespassing signs or anything like that. In fact there was a sign there saying this was the boat pullout for the Jarbidge and the Bruneau Rivers, for kayaks and such, so all was good.

We made camp there and some fairly strong wind came up for a bit, just before dark. 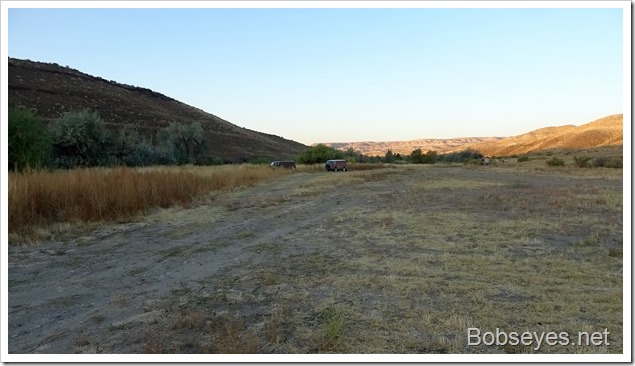 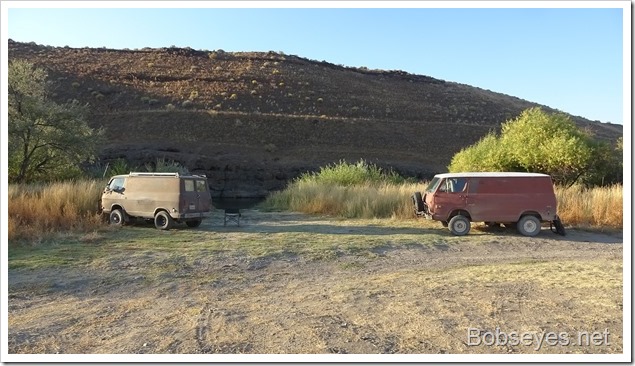 The Bruneau river is quite nice here and this is the local swimming hole. It was a bit cool for us older guys to jump in, but we talked about it. 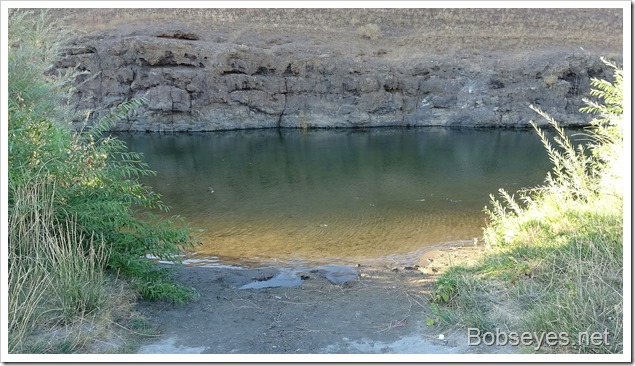 We are getting a bit low on water so Marty suggested we try his filter to replenish it so he got his stuff out, but the water wasn’t deep enough to get the filter in the water without getting wet, so we abandoned that idea. The river is fairly clean as it comes out of the mountains. 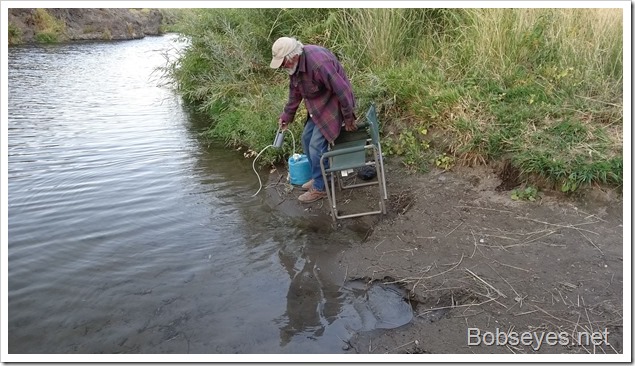 We will be heading on over to the Duck Valley Indian Reservation to do some interesting stuff, I hope. I plan to visit one of the Indians I know and give him some stuff I have related to the Indians around this area.

This was the first arrowhead I ever found and it was near here and has a story. A very well crafted piece. 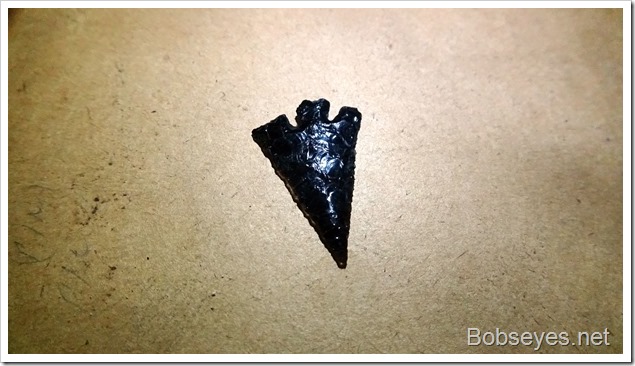 I cast that arrowhead in silver a long time ago. 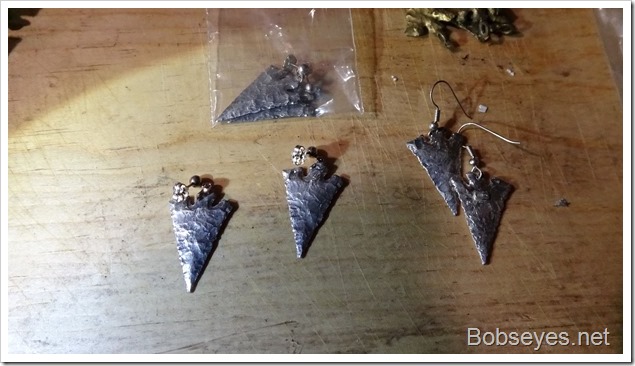 I have a lot of stuff, over 20 pairs of earrings and more that I have no need for. 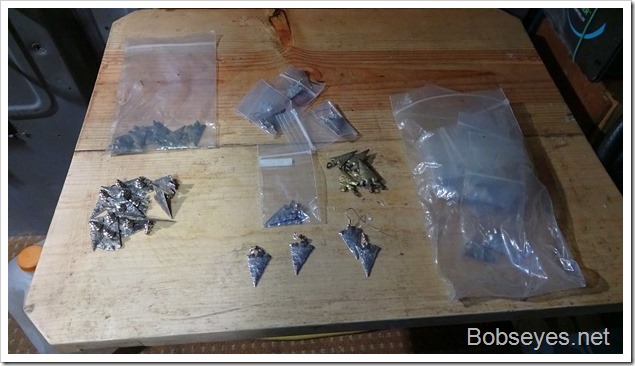 2 Responses to New Tires and Then Head for the Bureau River in Bureau ID.