New Hot Water Heater, Bought and Installed With a New Pan Too

Today’s task is get hot water back in the house

First thing this morning once I got it going was to jump in my car and head to the shopping area to buy a new hot water heater as I discovered mine leaking yesterday.

The shopping wasn’t too bad and I got a few other things too as long as I was there.

I headed straight home from there as I wanted to get the new tank installed before the day was out. No hot water means no shower.

The old tank came out without too much trouble. I did have to mop up a bit of water on the floor. I used my dolly to get the old tank out of the house.

Here’s the new water heater as well as the old one I just removed. 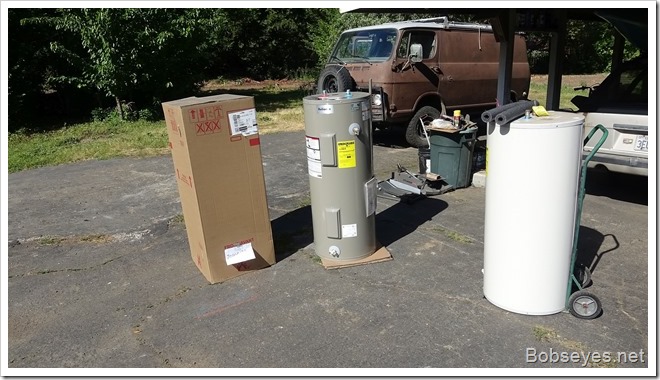 I decided to replace the pan

I bought a new pan for the heater to sit in so if it leaks the water will go outside instead of all over the place.

Here’s the pan installed. The old pan I had was a bit small so that’s the reason I replaced it with this new one that is two inches wider than the old one. 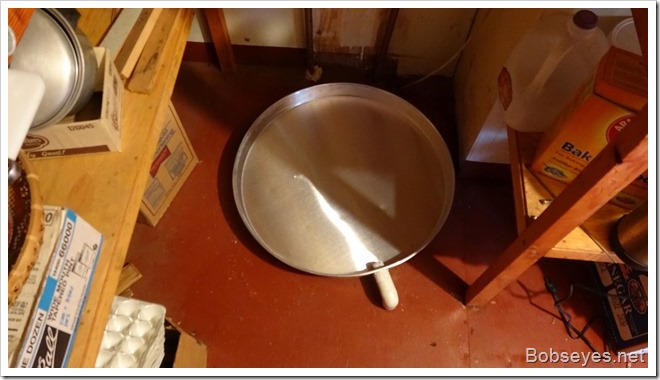 The only problem I can see using the pan is if the tank gets a leak it might be a long time before I realize it but I guess that’s better than flooding my pantry.

I was able to use all the old hardware and things went together smoothly for a change. You just never know how things are going to go until you get into it.

Here’s the new tank with the water hooked up and the electrical supply hooked up too ready to fill up with water and then the electric turned on. Time to test it out. 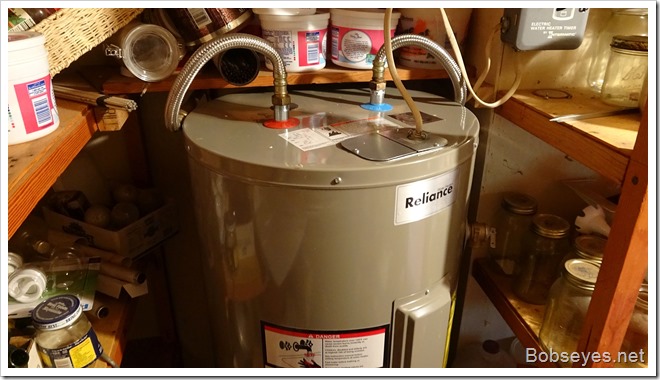 There were no leaks and the water got hot so I think this is all fixed.

I had some more stuff planned but after getting the tank installed I was thinking that’s enough work for one day and so I just puttered around the yard and did some chair hopping which I think is a nice way to end the day.

I did check the web site of where I want to buy some meat bird checks locally and it looks like they will be getting some in tomorrow. I wanted to buy locally as I only want about a half dozen meat chicks and I want a couple non-meat birds to go with them. Mail ordered birds usually have a minimum so that’s why I’m doing it this way so I can buy jus a few of them.

I rather not make it work

I don’t want to rise up the meat birds and butcher them all at the same time as that’s work. I’d rather butcher a couple at a time so it’s not so much like work.

I’m thinking if I can get my chicks soon I might be able to get the new momma hen to take care of them with her three new chicks. I’ll just have to experiment around to see what I can make work to suit my needs. I’ve read the meat birds are rather lazy and just like to hang around the feeder and eat. I’m hoping to put some regular chicks with them to see if I can get them to get the meat birds to move around a bit.

That was it for  me today and hey, I have hot water now. Great. :O)

(Visited 130 times, 1 visits today)
This entry was posted in Uncategorized and tagged Replacign the hot water heater. Bookmark the permalink.

2 Responses to New Hot Water Heater, Bought and Installed With a New Pan Too