As usual it took a while to get it going today. It’s just so nice to sit out in the yard and relax to start the day off so that’s usually what I do after letting the chickens out.

Eventually I started working on the van. Today I wanted to get the gas lines hooked up to the gas tank and fuel pump so I’d be under the van working on putting things together, but first I needed to find a way to cut the new stainless steel braided gas lines I bought. The stainless steel mess is  hard to cut. 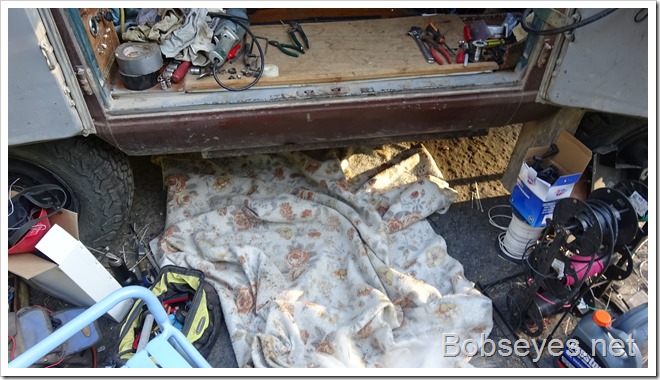 I thought I’d try what I had to cut them but no go. It made a  mess of the line as I couldn’t cut the stainless mess with these tools without tearing up the cut line as you can see where I tried to make a test cut in the black fuel line. 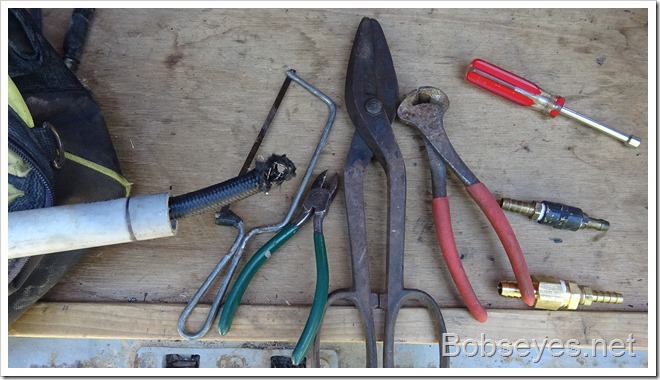 Cut off wheel to the rescue

I knew my brother next door had a cut off wheel that should work, but he wasn’t home and I couldn’t find what I  needed so I went back to my place and sat down for a bit when he came by in his golf cart so I was able to borrow his old die grinder hopping that would work. 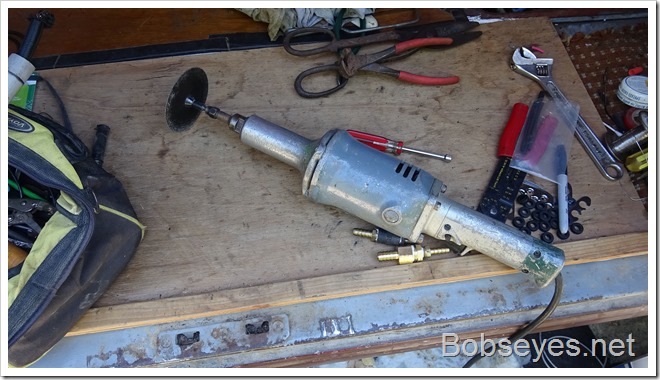 I did a sample cut and wow that worked great but now I would have to blow the lines out to make sure I got all the cut particles out so I did. 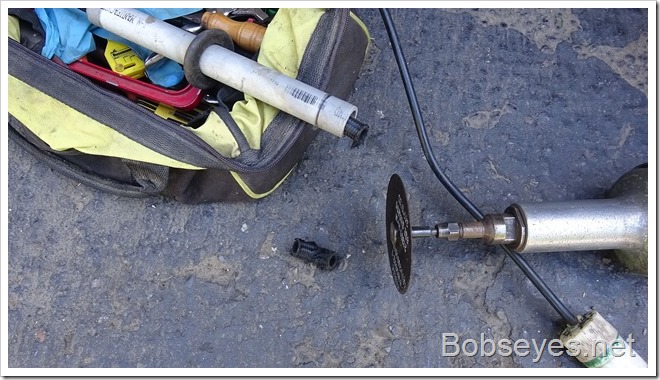 First I cut a piece for the hose size adapter and got it all clamped together ready to go. 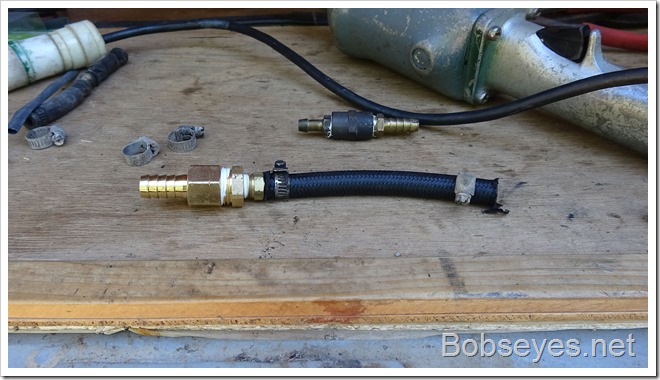 Short term memory not so good

l needed my quarter inch nut driver tool but I couldn’t find it, so I looked around everywhere more than once and still couldn’t find it until I turned over some rags in the van and there it was. I spend a lot of time trying to locate tools and materials I use. It’s part of the job for an older age guy that has a short term memory problem. That slows me down quite a bit but at least I get a lot of exercise looking for stuff.

Then I looked for the package of tie wraps I was using a couple days ago. I looked everywhere more than once but couldn’t find them.

Eventually I realized I didn’t need that pack, I needed larger tie wraps which I was able to scrounge by finding some scattered around in my van’s tool box. I never did find the other pack of them but will eventually as it’s here somewhere.

Anyway I took the parts under the van and installed the new gas lines to the fuel pump and the return fuel line to the fuel tank. 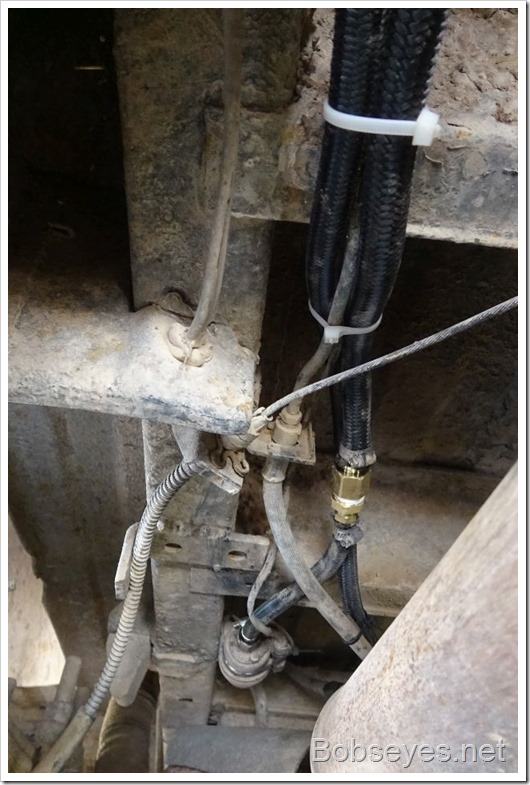 Here’s another angle of the installed hoses and fuel pump on the right. 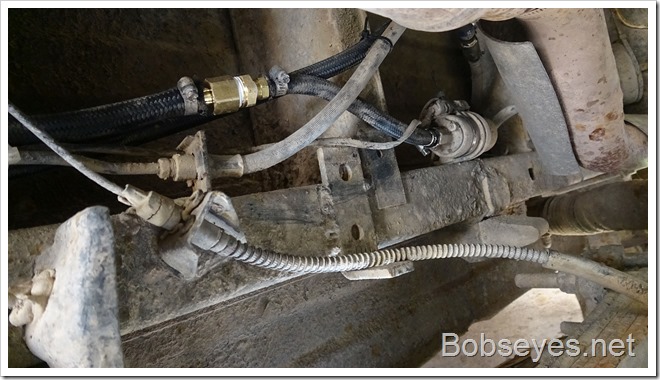 I worked on that all afternoon at a slow pace of course. I just keep puttering until things get done.

I finally completed that which was good.

I had some help when I let the chickens out. 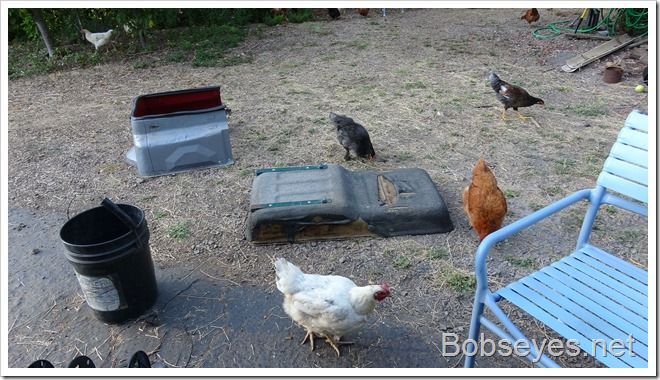 I needed a nap so went in the house for one. After I checked my email.

There was an email from the head state park guy about them acquiring our family property that was encouraging.

He said they were real interested in our land and would set up a plan to make things happen. Great.

Back outside for some chair hopping as I’d gotten all I wanted to do on the van done today. Still a few things to do before I try starting the engine to time it.

Since I’m done with my five day fast I ate some of these grapes that are yummy and getting sweeter every day. 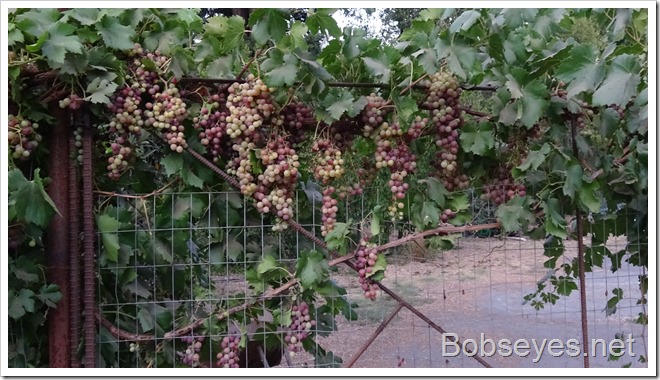 Green peaches for the chickens.

And I thought these peaches I thinned off the tree as there were too many and breaking the branches would be good for the chickens. I got a bucket and picked some up and took them to the chicken pen for them to eat. The peaches are pretty green and they don’t like them much. But when they start to rot they will likely eat them as for some reason when they won’t eat something, they usually will once it rots a bit. 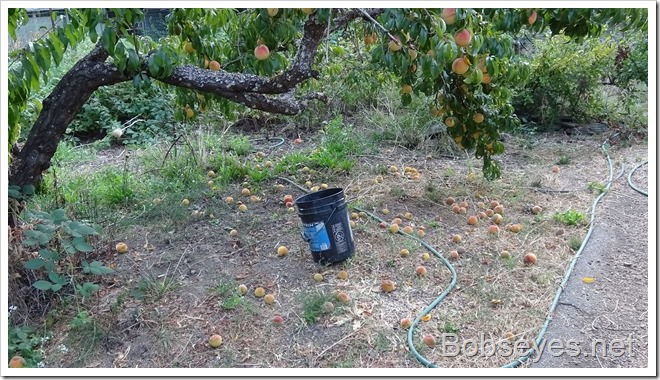 And just before dark the young chickens went to roost where they are supposed to go, at least most of them. There were still five in another place that I moved to this roost to train them as I did these ones. 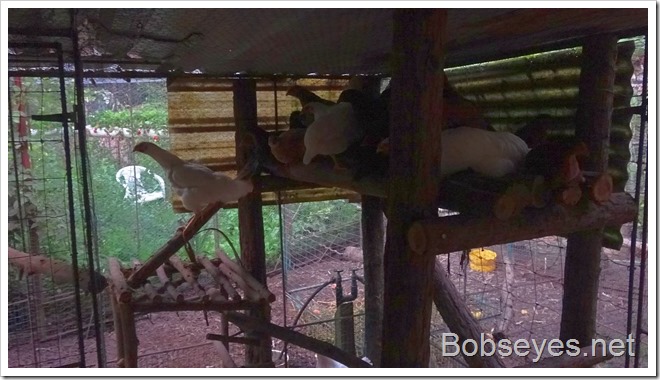