Let’s get this job done

First thing today I went over to our rental to help my brother Barry get the furnace going there. We were working on doing that last week when we discovered we couldn’t find the wire that went to the new furnace from the thermostat. Barry crawled under the house to look for it last week and couldn’t find it, so today we were determined to find it or install another one.

Going under the house

I put on coveralls and went under the house where Barry looked last week to have a look for myself as I knew it had to be there somewhere because it was hooked up before. Under the house was real tight and I couldn’t even turn over. Right away I found the wire. He couldn’t find it because he was laying on it last time.

We get it going

Turned out he had also cut it last time he worked on it a few months ago. We fed the wire through it’s hole to the furnace and spliced another piece on it to make it to the furnace. I hooked up a new thermostat but couldn’t get the furnace to turn on. Turned out Barry had broken a wire when he spliced the wires together. We fixed that and the furnace still wouldn’t go on but Barry suggested it might just be too hot in the house to let the furnace go on. I tested the wire to the thermostat, it turned on, so maybe it was too hot for the thermostat to work so decided to button it all up and let the lady test it tonight after it cooled down a bit. If it doesn’t work now it would mean the new thermostat was bad. I think it will test out ok.

I left Barry working on some other stuff and drove to town, Guerneville. I parked at the bank and got some cash for traveling. Then I went to the package store and shipped a defective PTZ cam back so I can get credit for it and I hope I can recover the shipping costs.

Next I walked over to the food store and bought a carton of chocolate ice cream I was testing out to make sure it was corn less as I think it is but it needed testing to be sure. So far so good.

I drove on home for a nap as I seemed to be just tired out today for some reason.

Late in the day I found an extra water timer and put new batteries in it, but it just blinked and apparently died just sitting around last winter, so I found another one I wasn’t using  much and moved it to this faucet and turned on the water to water my tomatoes. 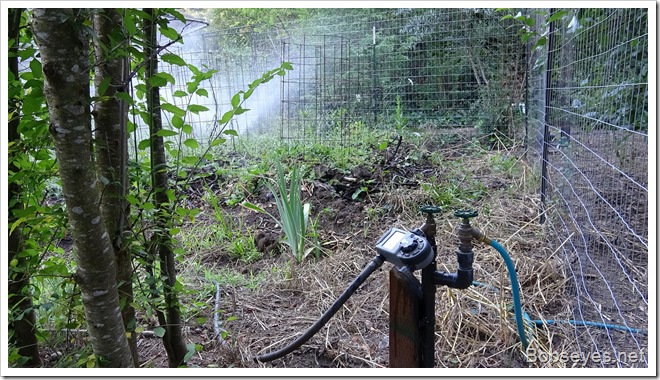 After another break I went back out and checked the chickens out.

Here’s Buffy with some of her chicks in the mulch pen. 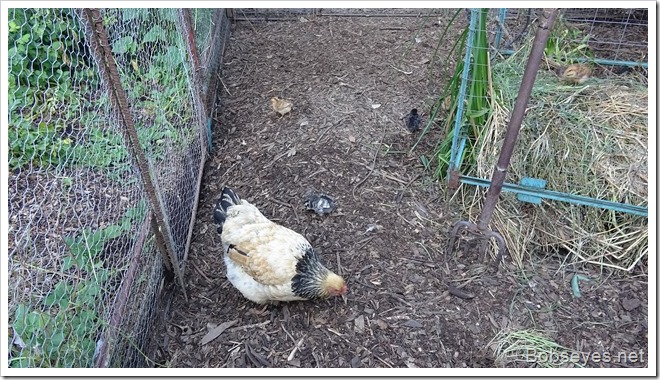 And here’s some peeps in the mulch bin. 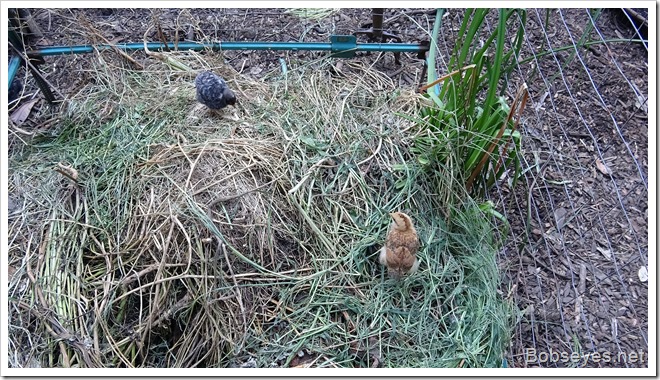 I sat down in the chicken pen and Lil Red came by wanting up.

Here’s Lil Red on my knee. This chick is one of the oldest chicks and is way different than the other chicks in it’s thinking. 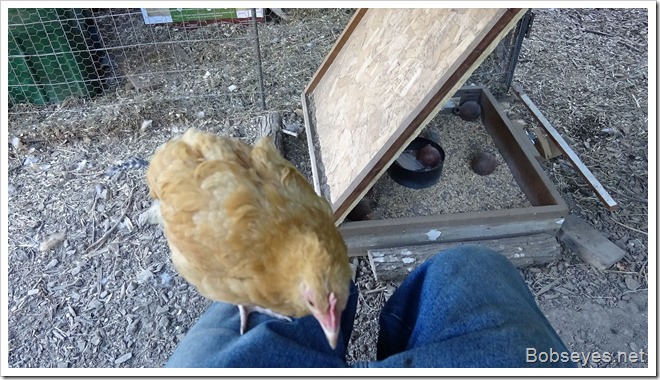 It walks up to my shoe and peaks it hard to say hey, I want up. So I put  my hand down and it just walks right into my palm like this. 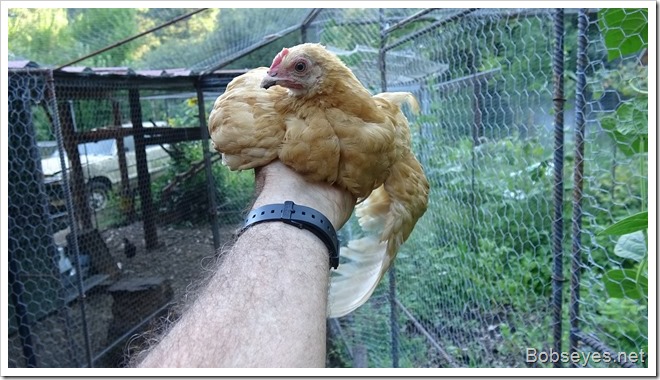 I don’t have any other chickens like it. You just never know about chickens.

Toward evening I walked around the yard looking for ripe things to eat. I found some plums and the prunes are just starting to ripen. Ripe enough for me to start eating as I like them a bit on the firm side. Most of you have never had a fresh prune, only the dried ones. Fresh prunes are real good but when ripe don’t ship well so you won’t find them in stores. The are real good though.

I walked by these mulch piles the chip guys dropped off the other day. I’ll take as much as they bring by as I have lots of uses for it. 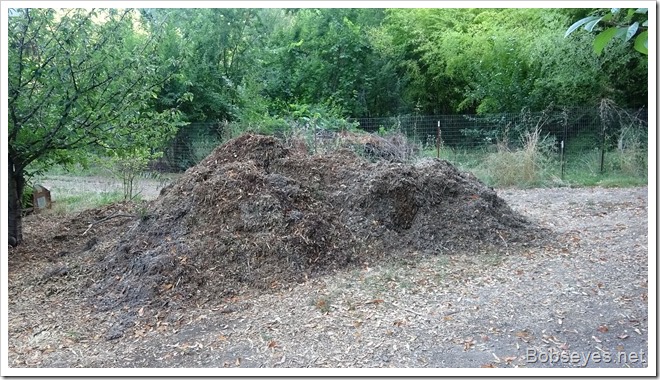 My black Persian mulberries continue to ripen daily so yes, I was up in the tree eating them. They are real good but squirt juice all over the place. Yummy. 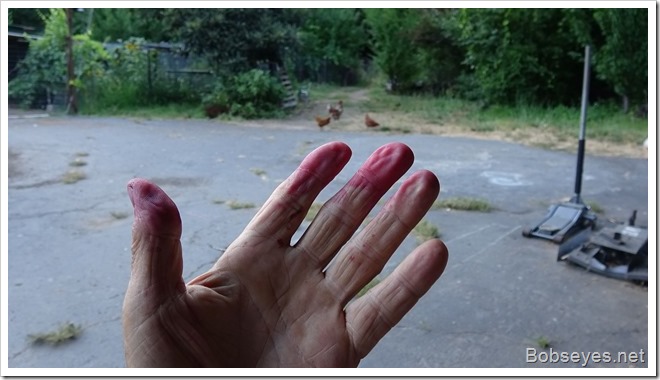 It seemed like today was  mostly a resting up day, so I did and enjoyed doing it. :O)