New Camera Battery and a Hike Up to the Hermits Place

Getting a new battery for the new camera

The first thing I did today was get on the internet to Amazon to see what I could do about my new camera battery that was defective. I choose to do a chat and after a bit the guy said he could refund sixty bucks so I could order a new battery from Amazon. I checked out the batteries that would fit my camera and found I could get two of them with more storage for sixty bucks so I decided to go for that as if the camera still has a problem I figure I can still return it. So I placed my order for the new batteries.

This morning I went out to take care of the chickens and was sitting around waiting for the sun to warm the place up after taking care of their needs.

A hike to the hermits

It was a nice sunny day, maybe a hike was in order. I’ve been trying to catch the old hermit that lives up behind the state park by my place for some time now but have missed him because he wasn’t home. He’s home most of the time being a hermit and all. But he’s been out the last couple times I hiked up to his place so I’d give it another try. If I don’t catch him soon he might not be with us anymore as he’s getting up there in years. I think he’s somewhere around ninety now.

So I got my camera and started off up through the state park called Armstrong Redwoods State Reserve which is just up the road from my place. 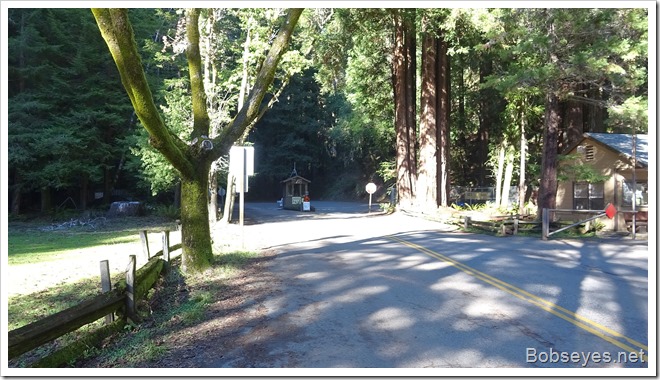 I walked up the road as it’s easier to get through the park that way.

I walked up through here. 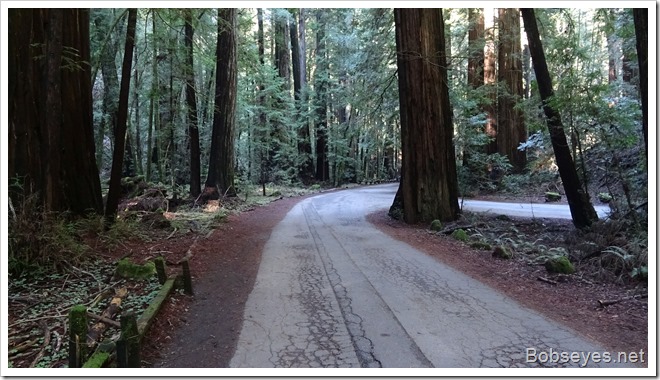 Here I took the road to the right avoiding as many people as I could which wasn’t easy with the holiday and the sun out and all. 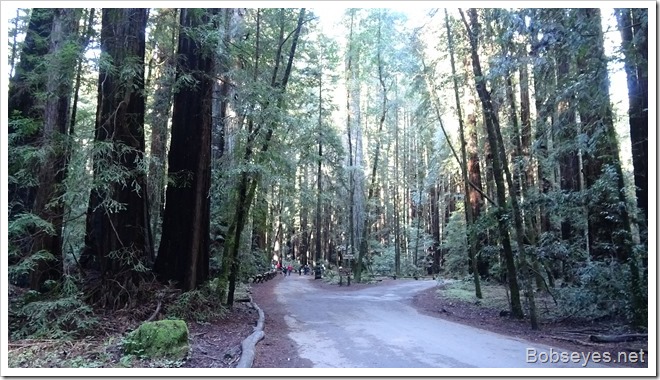 Going up the hill

The road was mostly flat for the first mile or so then it started up the hill for the next mile. I stayed on the road until I got to this road which is named after the  hermit. 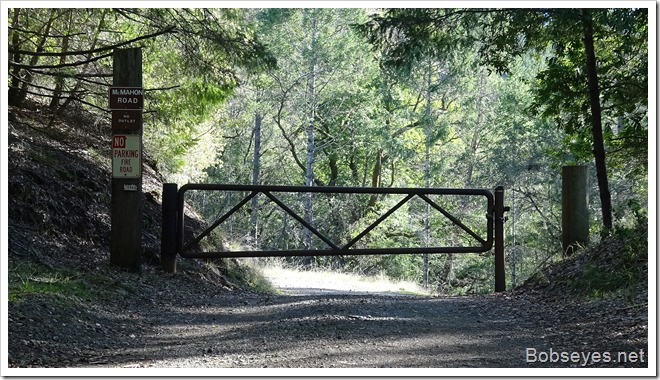 I veered off through the forest just to the left of the gate and went across country for a bit through here. 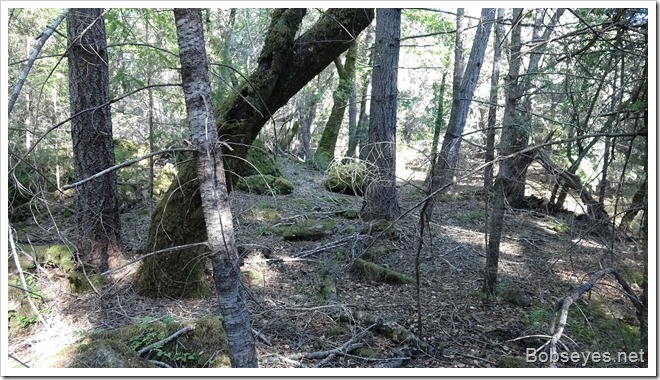 Things started to open up a bit as I got a little further up the hill. 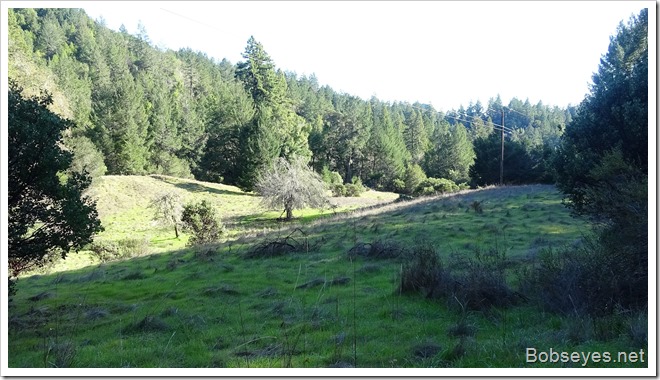 I got back into the redwood trees going down this road to the creek. 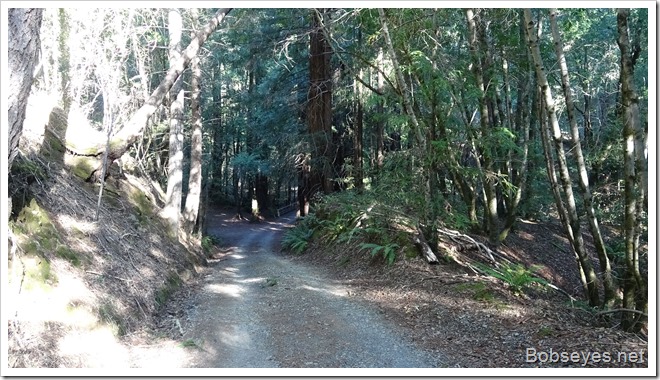 I left the road again and walked up along this creek until I got to a place I could cross it. 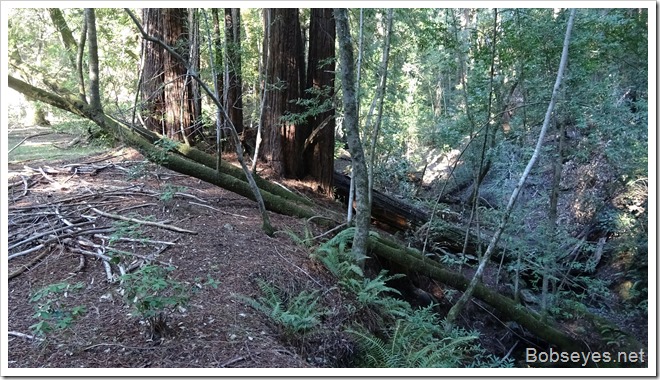 There’s not much water in the creek right now but the banks are steep in most places so I needed a place to cross which I knew was up here but I’d forgotten just where that spot was but I found it eventually and crossed over the small creek and started up the other side. 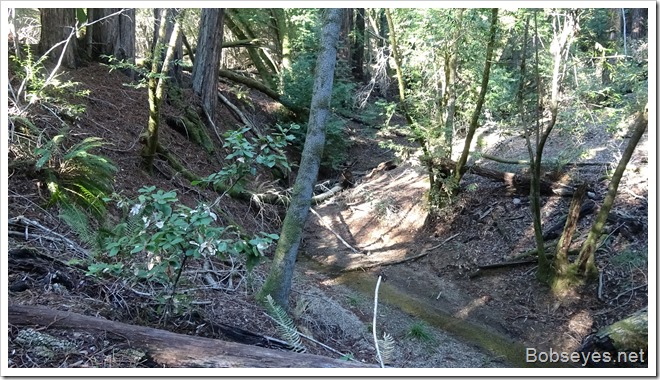 I use the back gate

I was headed for the hermits back gate as there aren’t a bunch of locks on it like the front gate has. 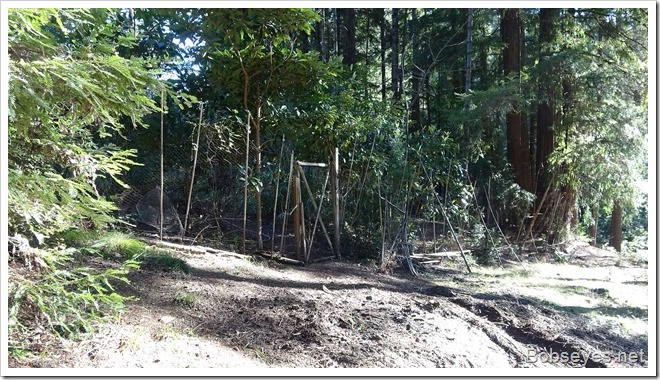 I walked through his garden area and called out when I got to his house but there was no answer so I rang his bell and there still was no answer. 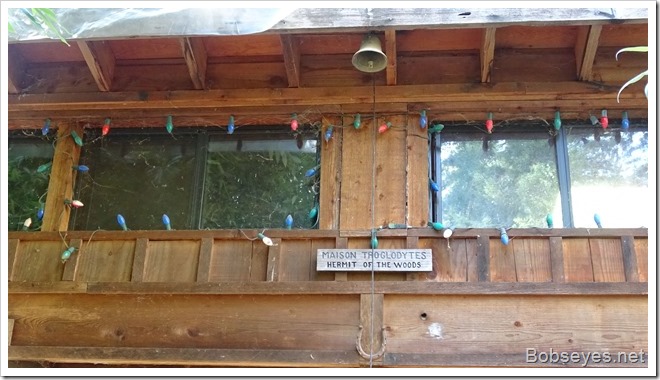 Darn I missed him again. I looked around to see if he was still alive and living there. There was some signs of life around so I guess he’s still alive but maybe visiting somewhere over the holidays.

I remembered he had some orange trees in his hot house so I checked it out. The hot house was all fallen down but there were still a few oranges so I helped myself to three of them which I devoured on the way back down the hill. Very good. Noting like a fresh orange off a tree.

Heading back down the hill

I started back down the hill enjoying the stolen oranges as I went. I always like to take a different way back so I jumped off the road and walked down though this nice meadow. 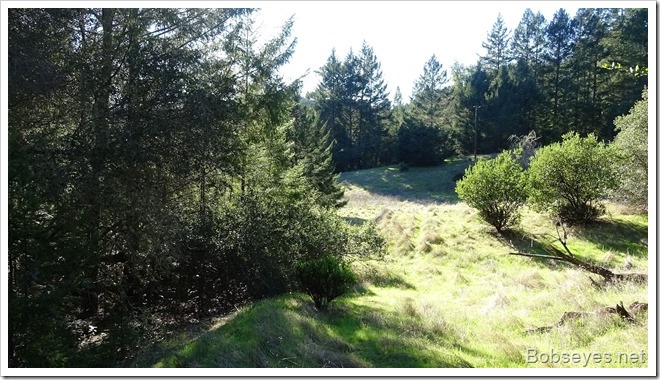 Enjoying the day and resting

I stopped here for a break at the parks water storage tank and sat on that lumber pile for a bit mostly just to enjoy the day. 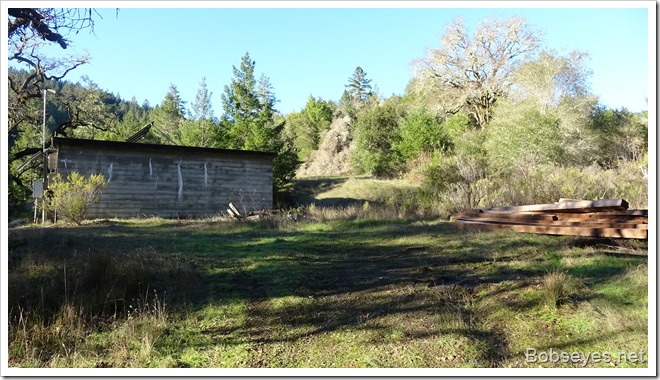 And back down through the park. The sun was going down and most of the people had left the park for the day. 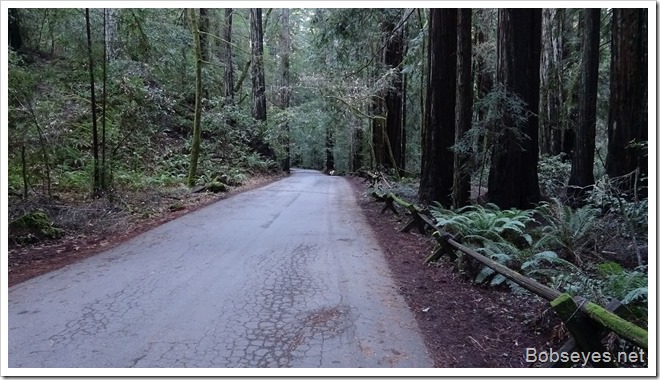 Realized I was beat

I made it back home where I realized I was beat so I got a cup of coffee going and then it was time to let the chickens out to graze so I did that and pretty much took it easy watching the chickens graze away.

And that was my day for a nice one. Got a bit of exercise.