It’s going to be a drizzly day

I could  hear it drizzling this morning when I woke so I took my time getting it going.

Grazing in the rain

After a cup of coffee I went out to check on the chickens. It was still raining lightly so I let them out into this field that I fenced yesterday so they can graze in the rain and find some worms. 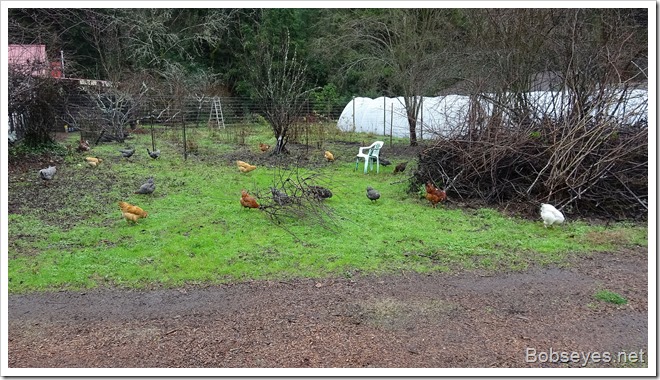 The new fenced pen should work out good as they can’t do  much damage to anything in that field and so they’ll likely be in there a lot.

It’s nice to watch them as they get their freedom and run and fly out into the field to feed.

I watched them for a bit. When it rained harder a lot of them hid out under the haul trailer I had parked there to keep at least a little dryer. Lucky for the chickens they have a lot of feathers to keep them warm, especially with their winter plumage.

My plan was to leave them in that pen the rest of the day. I knew they’d go to roost at the right time which is just after 5 now.

Upgrading the nesting boxes a bit

The upper entrance door was a bit small so I took it off and cut some of it off to make it larger. It’s ready to get screwed back on now. 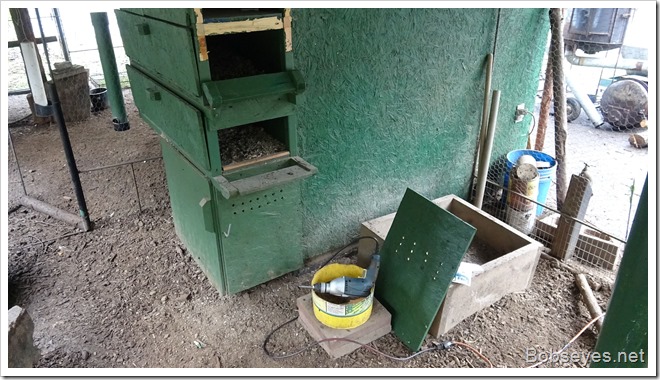 I also wanted to make the sides higher where we retrieve the eggs as they were knocking a lot of the nesting materials out the sides as the sides were too low. I doubled up what I had before so now it looks like this. I’ll give that a try and see how it works out. Those side doors that are down go up in normal use and are there to make it easy to retrieve eggs. 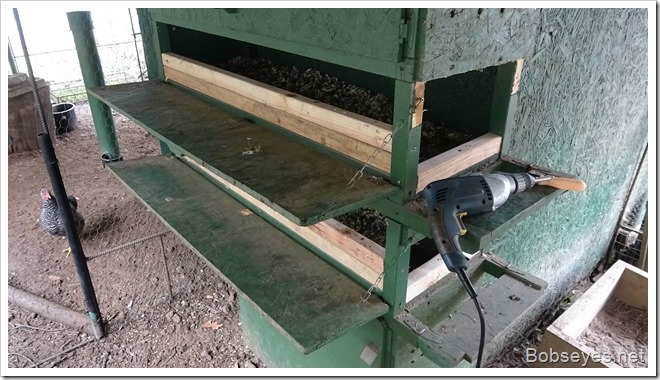 After that it was still raining so I went back in the house and watched some You Tube stuff. I seem to be getting into robotics as I have an interest there as it puts a lot of the stuff I leaned as a youth into play.

I’ve had the interest in robotics but with the interest you need something to do with it, but what? After watching some stuff I’m thinking a tracked vehicle with a camera on it to patrol the yard at night, operated with Wi-Fi from  my computer that would also record videos of movement when I wasn’t watching it. It could also alert me to anything in the yard. Something like that would have ongoing possibilities for expansion. Maybe even get it to patrol by itself sorta like the robotic vacuum cleaner does. Maybe I should buy one of those and adapt it to tracks?

Anyway I watched some stuff then decided it would be a good day to get the leaky guest toilet repaired since I now have the parts I bought yesterday.

Here’s my work area. I put it together and it leaked pretty good so I tightened things up more until the drips stopped. Success. 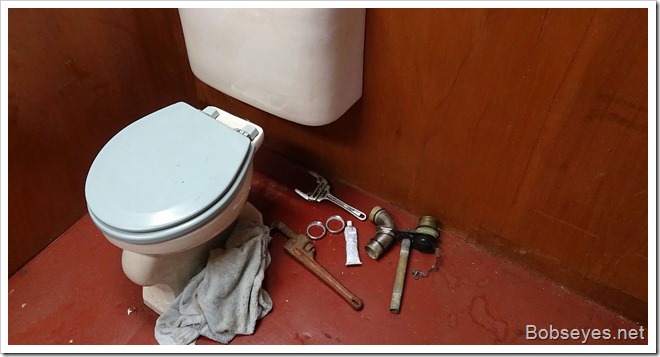 Since that job went pretty good I decided to work on the kitchen sink drain leaks so I pulled all the junk out from under the sink to check things out. I decided to fix one side at a time so I’d still have a sink to use in case I needed more parts or something went wrong, which it did. See that split big nut by the red flash light? 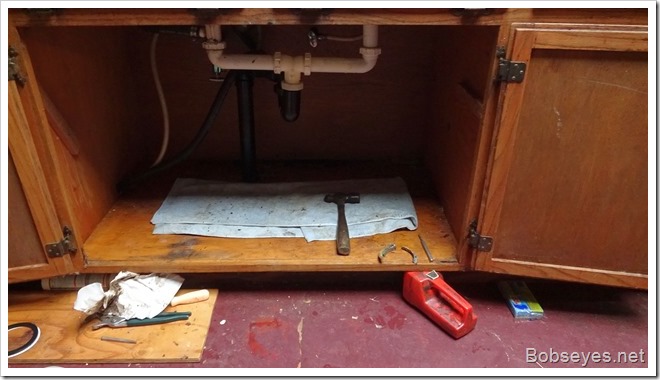 I could see the worst leak was coming down through this big nut which holds the main sink drain to the sink which meant I needed to remove that nut and fix the seal.

But I couldn’t turn that big nut so I got out a hammer and a punch so I could persuade the nut to turn,………………but.

Instead of turning it broke into three pieces likely because it was all corroded and made out of aluminum. Messy stuff. 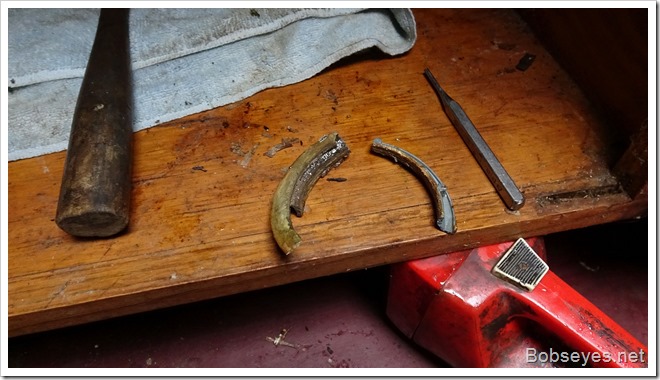 Well now I need a new nut and maybe a new sink drain too as the old one doesn’t look too good. Easier to buy a new unit than trying to clean the corrosion up on the old one.

So that job is on hold until I get to the hardware store.

The rain had let up when I went out to close the chickens up for the day and then I came into the house and called it a day.

Nice day working away on projects. Good thing it’s raining to encourage me to work on these inside projects.