When I went out to feed the chickens this morning I could see my neighbor had a big fire going burning up some wood stuff. I saw some other local guys over there helping so I went over to see what was going on and to shoot the bull a bit. 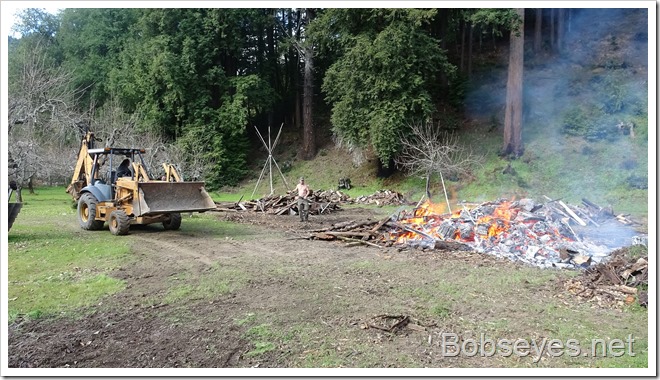 They had most of it burned down but the coals will likely burn for a few more days or so in the ashes. 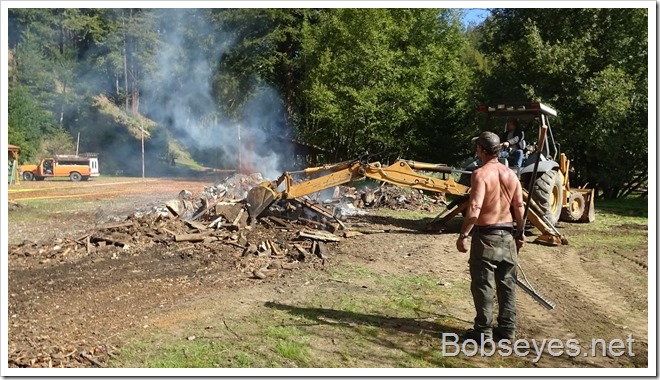 There was a local guy there, Tom N. whose relatives who are dead now, used to hunt and fish at Jenner where I kayak and he was interested in what I found down there left over from what they did down there. He wants to go check some of the stuff out so we will do that some day when I get back from my trip to Arizona.

First thing after that,  around noon, I headed over to Santa Rosa to the AAA insurance place to see about getting my van’s registration fixed up as I didn’t receive the new registration in the mail after paying online.

They were open today and I found the place this time without too much trouble although I had to go around the block to get into their driveway as it was one way.

I know not what

Getting DMV stuff done here is much easier than at the DMV. The people there were all very nice and I got it done without any trouble. The lady checked and found it was mailed to me on Jan. 9th after I paid online on the 5th, so something happened to it in the mail but I know not what.

After that I headed on over to visit with Joe for a bit as it was on the way home, more or less.

I found Joe and Mark fixing lunch and was invited but I had to turn them down because of my corn thing. There’s some kind of corn stuff in almost all of our foods and I just can’t take a chance. But it sure looked good.

It turns out Mark has a truck he goes around to places to slaughter animals for meat. He needed to install a water tank on his truck so he had water for the process as he said he couldn’t depend on getting water where he was working some of the time. 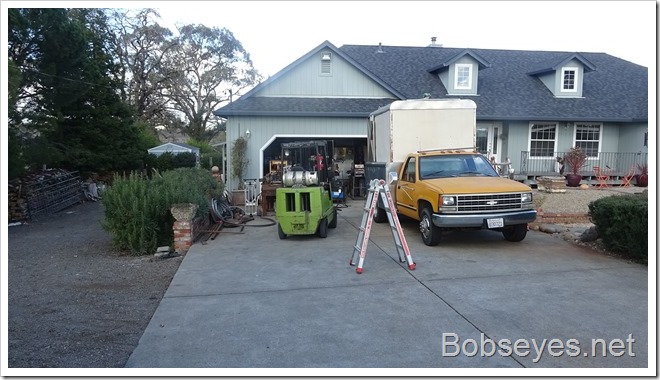 After lunch they went out and got started back on the project and I could see I was in the way so I headed on home.

I needed to check out the van’s engine for the trip. Oil and water looked ok, but I found a small radiator fluid leak at the base of the black hose on top of the engine. I tightened things up and then started the engine and was going to let it idle until it reached operating temperature. 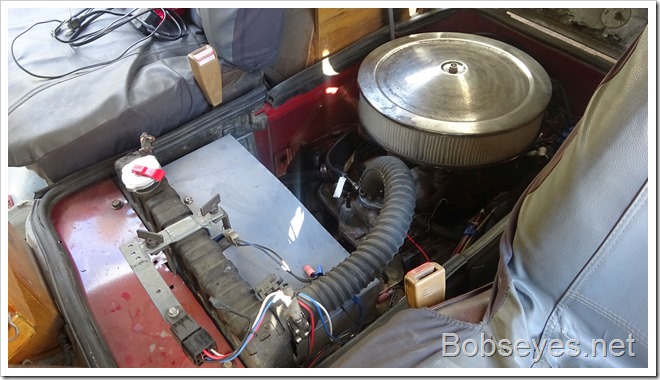 While I was doing that the fire guys next door came back to stir the fire so I went over to shoot the bull with them some more and forgot about my van’s engine running. So by the time I got back it had run for an hour or so. I didn’t see any more water leaks. I was going to grease it and  check the transmission fluids but didn’t get to that today.

I still need to do that and then load up the van and I’ll be ready to go.

Noise on the roof

Just before dark I heard some stuff crashing down on my metal roof. Hail which we rarely get around here. Most of it was about a quarter of an inch but I did hear some much larger pieces hitting off and on even in the big trees. It wasn’t enough to even cover the ground and was over in about 5 minutes.

Hail clouds overhead with the sun going down behind the hills to the west. 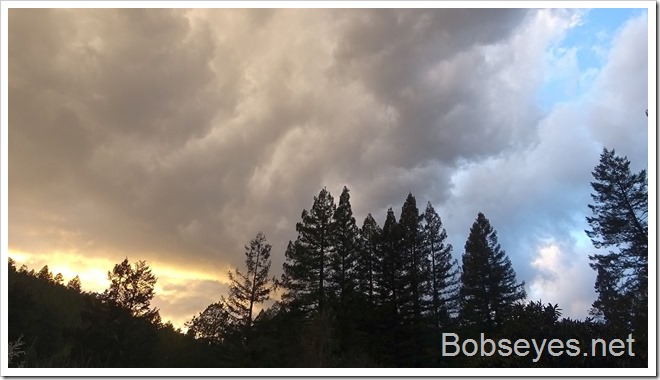 I worked on that last night until I went to bed installing the programs I use and setting up passwords and stuff like that. It’s a good thing I write all this stuff down or I’d be lost. I just tackled one thing at a time until I got it all done, about bed time.

This computer is very fast and even my Wi-Fi is much,  much faster now using it. My old computers where getting real slow since the introduction of Win10, especially starting up.

And I couldn’t ‘use the microphone on my desktop as it’s a gaming computer with about 6 fans that have gotten too noisy for the mic to be used.

My plan is to abandon the desktop computer eventually and use the laptop for all of my computer needs likely using a larger monitor for home use, although it’s monitor isn’t bad and it’s also a touch screen which I’m also finding handy.

Anyway, in another day or two I should have the van all prepped and ready to travel.