Some work up in the hills

Today seemed like a good day to drive up into the hills and do some work. 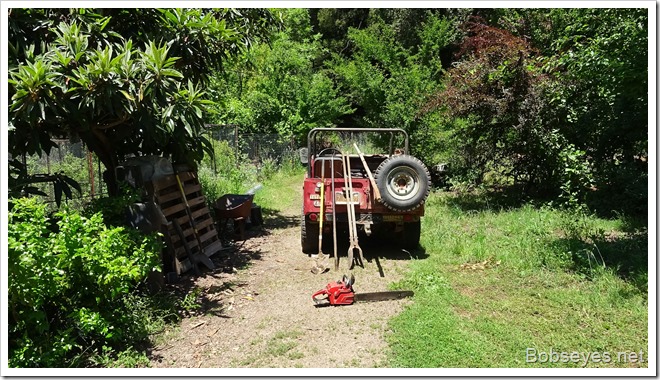 I loaded it all up and added a couple more things. 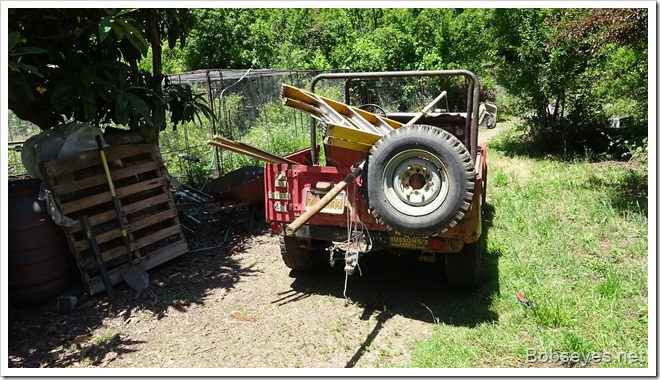 Got some younger blood

I thought a little younger help would be good so I stopped at my neighbor’s to see if Nacho wanted to go for a ride and do a little work for a couple of hours.

He was willing so we hopped in the Toyota and drove on up to the first spot where we needed to put the main water line coming down the hill from springs into our water tanks back up in the air as it was down and blocking the road.

Nacho says he’s never dug a hole with a post hole digger so I had a new helper, so I showed him how and what to do.

I told him I’d take some pictures to prove he were working.

Here he is learning to use the post hole digger. 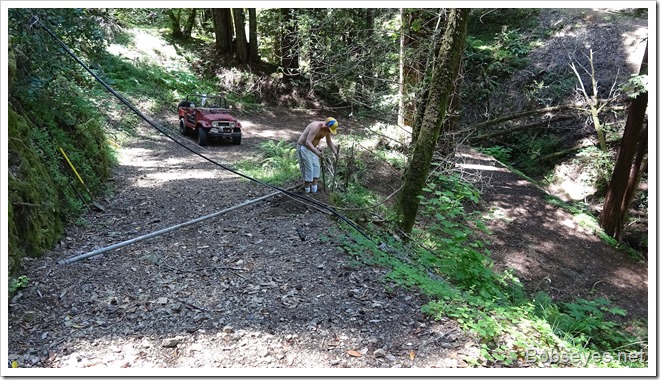 I had him dig the hole about three feet deep and then put the metal pole in it. 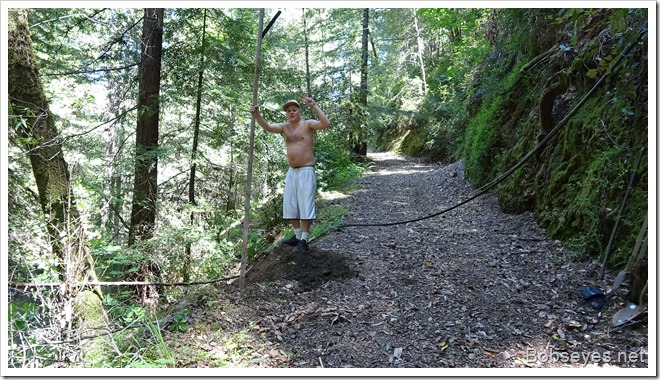 So you know how to pack in the soil,……….. no. Well take the shovel and turn it over and use the handle end to tamp down the soil as you put a little fill in, tamp and fill, tamp and fill.

He did a good job. Here he’s almost got it all tamped in. 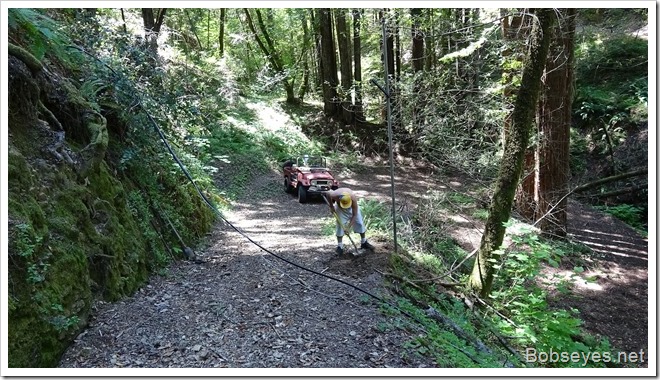 My turn to work and let Nacho supervise

Next I backed up the rig so I could stand on it to hook up the water line which I did while Nacho supervised. It’s good to get equal supervisor time in. :O) I think a fire truck could get under it if necessary. 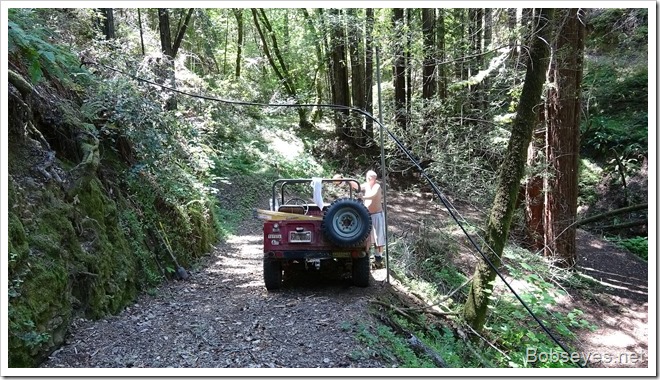 Heading up to the ridge top view

Once that job was done I told Nacho I’d take him up to the ridge top for the view.

Trees down blocking the road

But on the way we ran into these downed trees blocking the road so I got out the chainsaw I brought for the purpose, just in case, and cut up the trees so Nacho could move them off the road.

The road is blocked with down trees in front of the rig. 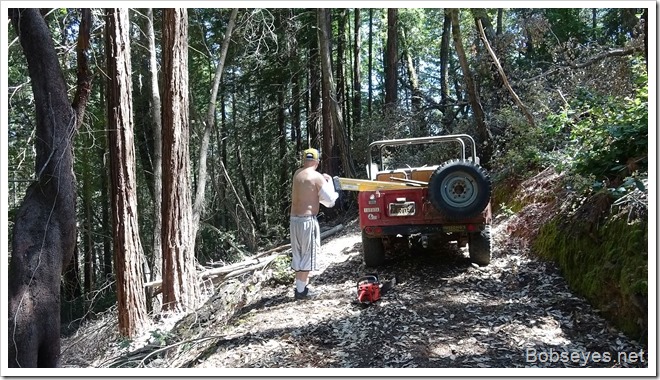 Here I’ve cut most of the trees and Nacho has moved most of them off the road. I  had him working fairly hard. 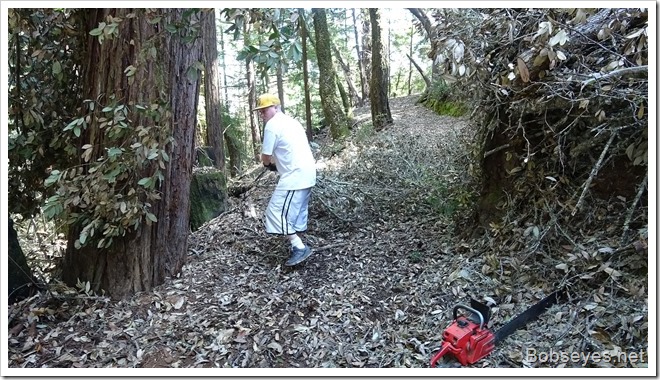 He’s just finishing up so we can continue to the top of the hill. 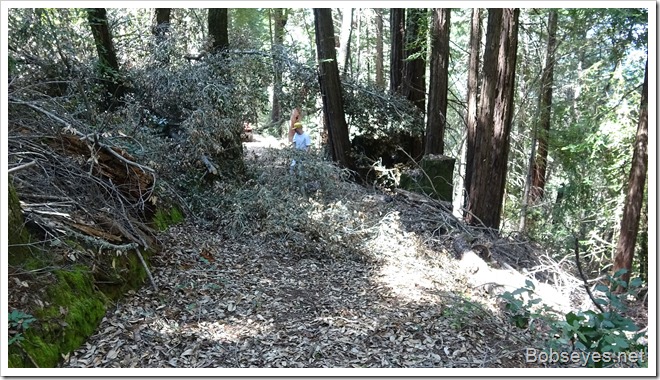 That was a big job, good thing I had Nacho with me to do most of the work.

Ridge top overlook of the town of Guerneville

Nacho had never been to the ridge top before and here we are. 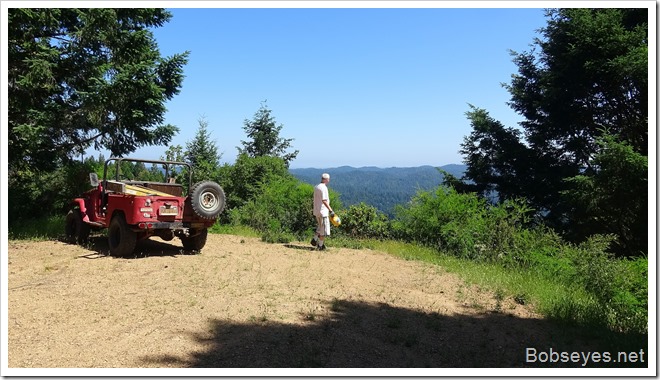 And here is the view of where the town of Guerneville is located down there on the other side of one of Korbel’s vineyards. Korbel, the world famous champagne maker. 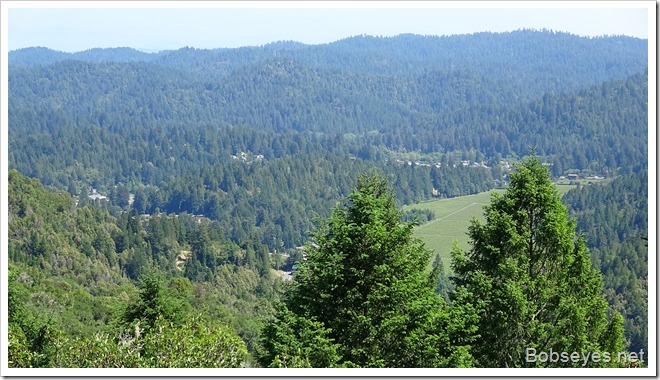 But first we ran into another downed tree not nearly as bad as the one we already cleared so we cleaned it up to got through.

We unloaded the rocks in the creek crossing which improved it a bunch. We’ll need a couple more loads of rock to finish the job which will get done sometime before next winter.

I dropped Nacho off at his place and thanked him, on the way home and went on home for a nap. I was tired out even though Nacho did most of the work. :O)

I spent the rest of the day puttering around the yard doing some tidying up.

Van’s out of the sun now

I cleaned out the carport enough to get my van parked in there and out of the sun which I’ve been meaning to do for the last couple of weeks or so.

I also rounded up enough water hose to hook up some automatic timers to water the big raspberry patch. That patch has lots of raspberry blooms and is just about to start getting ripe.
These raspberry plants are ever-bearing so I’ll really be in the berries soon for most of the summer. Lots of water makes for lots of big berries.

I’ve got a couple of chickens going broody which means they want to sit on eggs so I got a cardboard box out I had and cut a hole in it and put some saw dust in it. Tonight after dark I will try to move one of those hens, Sweet Pea into the box with about twelve eggs. I can add other eggs to her nest to make twelve or so. If that works out and she stays on the nest I have another chicken that I will do the same for in another day.

I have to watch each hen to make sure she is serious sitting on eggs and not just fooling around and taking off when she shouldn’t be.

It’s fairly easy to tell but I’m still learning about this stuff and how to do it.

Nice day in the woods on a beautiful spring day.