Mystical Fog Paddling Up the River and Back

Paddling up the river yesterday

I put in here by the bridge and headed on up the river along it’s edge. I had looked down river and saw it was fogged in down by the ocean so up river I paddled. 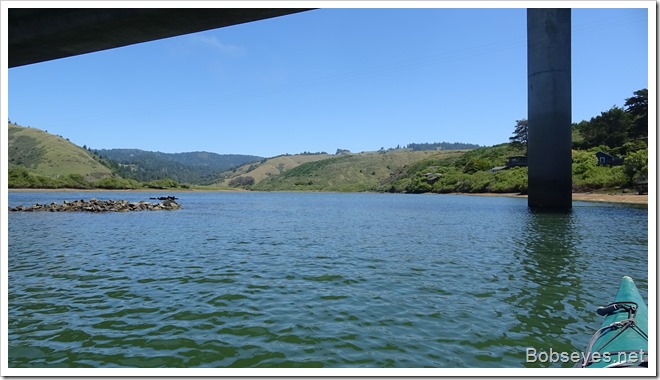 I took the right side and paddled on up. 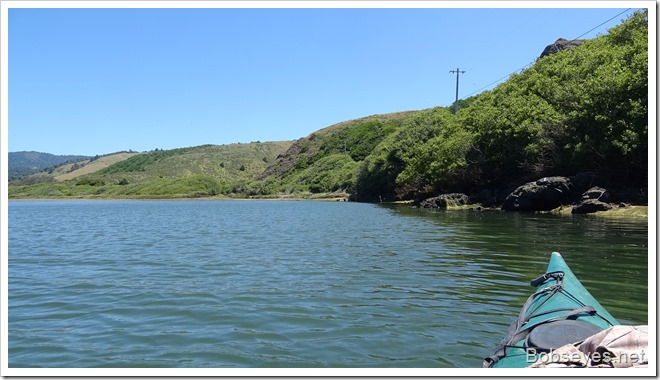 Some fog was moving in on me which picked the wind up a little. Going along the side I got trapped in these weeds and had to back up to get out of them to proceed.  It was still low tide so lots of weeds were exposed. 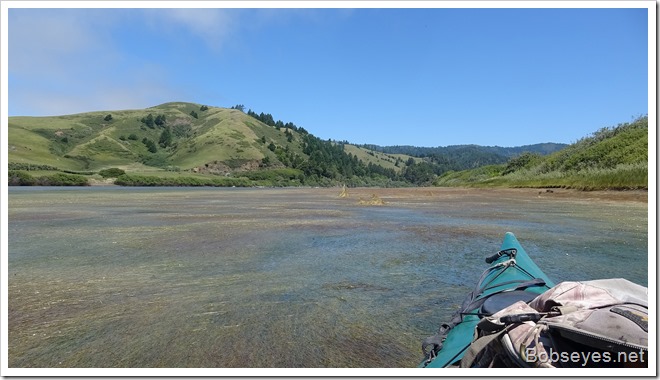 There’s usually some harbor seals on these logs but not today. Just some ducks on the gravel that I paddled on by. 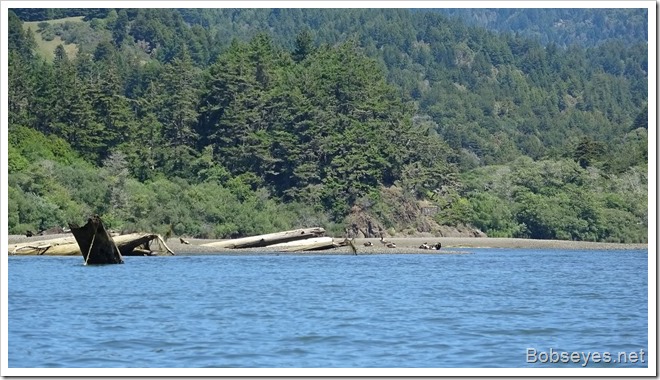 I ran into these cormorants diving and fishing. 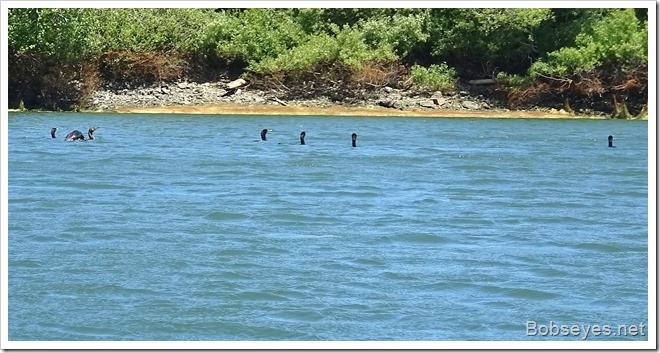 I pulled into Markcum’s pool and headed for that spot in the shade for a good break and to watch for wildlife. 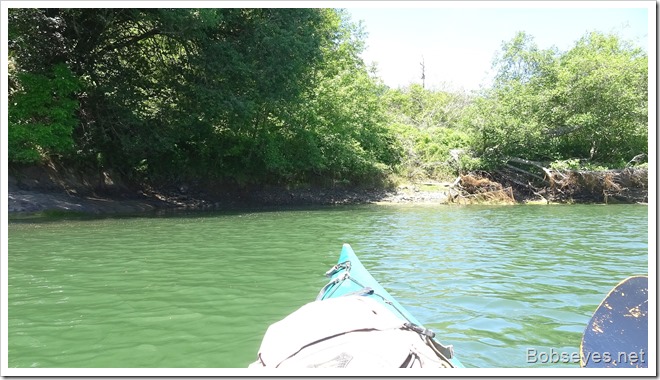 This great blue heron was up in the tree just above me but not over me. One has to watch out for that. 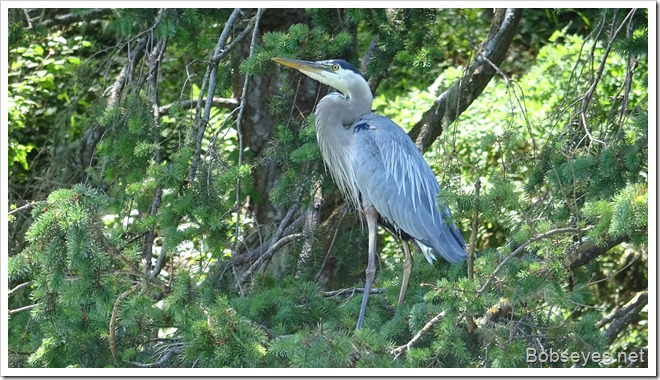 Fog off the water

I continued on up the river headed for the great blue heron nesting tree paddling along here. Fog was starting to come off the water just a little. 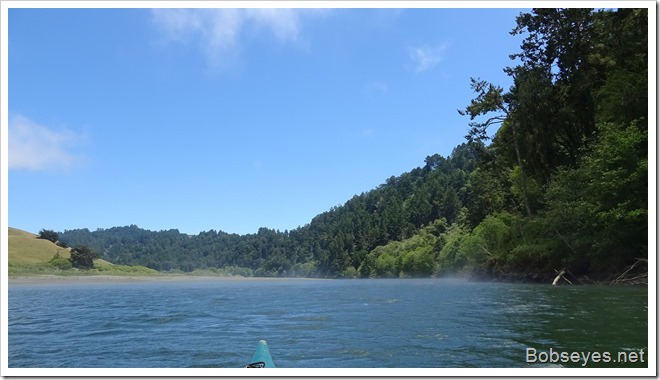 I made it up to this gravel bar which I couldn’t paddle through so I sat in the boat in the  water up by that gravel to watch and rest up. 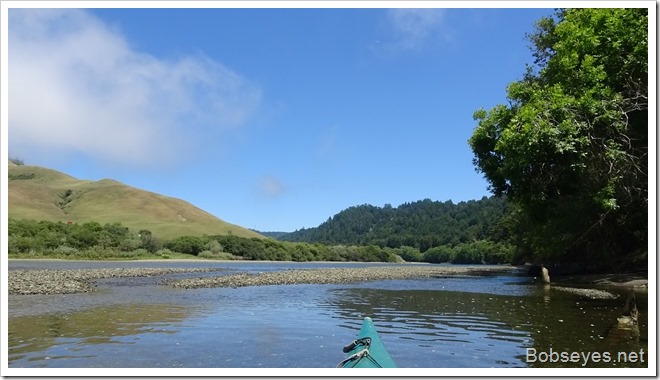 I noticed this merganser female duck fishing right in front of me in the ripple going over the gravel. She has a small fish in her mouth. 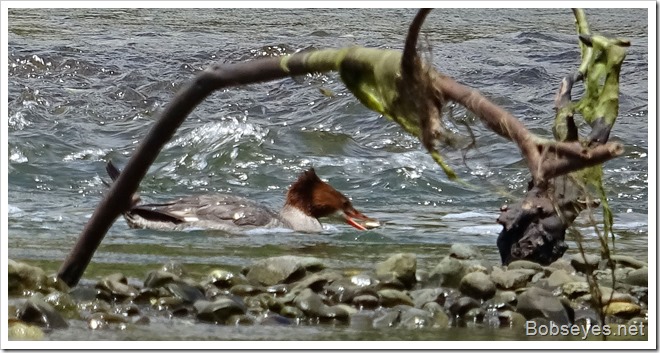 She see’s me and is  checking me out and that little one sure has a serious face. 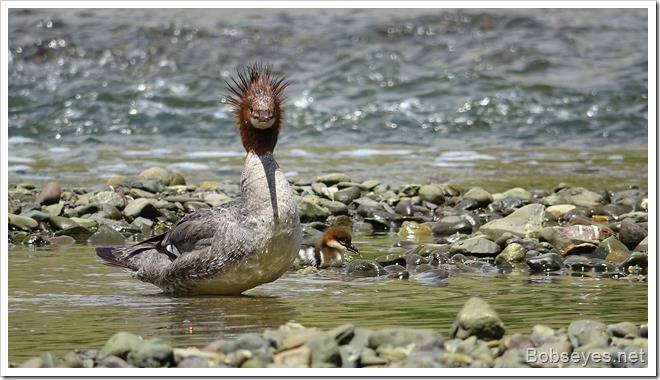 Eventually she waddled off with her little ones going up the river. 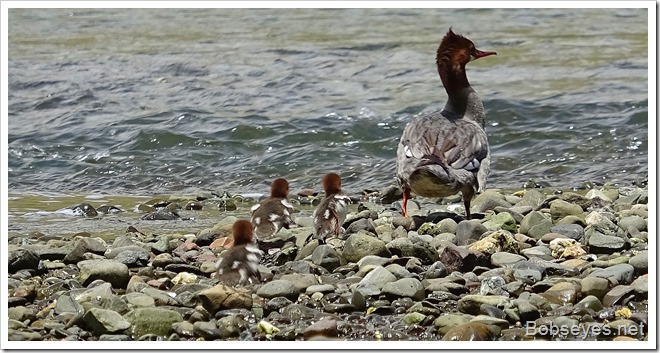 Eventually I headed back down the river. I was looking for an old camp spot along the way I knew about and wanted to check it out so pulled my boat onto shore here. I tied it up as it was low tide and the water level was slowly coming up. 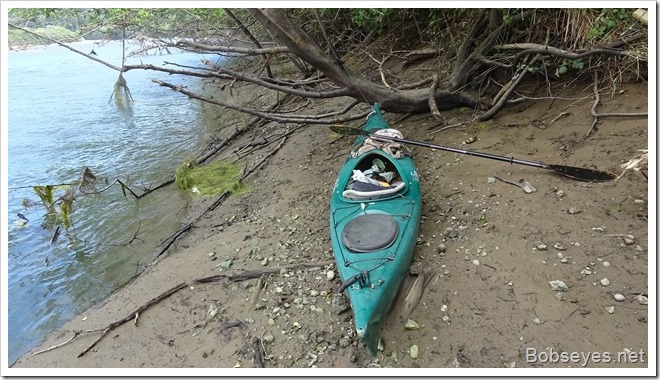 I was barely able to get up the bank and almost sled back down several times.

Once up onto the bank it was real overgrown with stuff and not easy to get through. I heard something grunting in the woods a short distance in front of me but couldn’t see what it was. I suspected a deer. 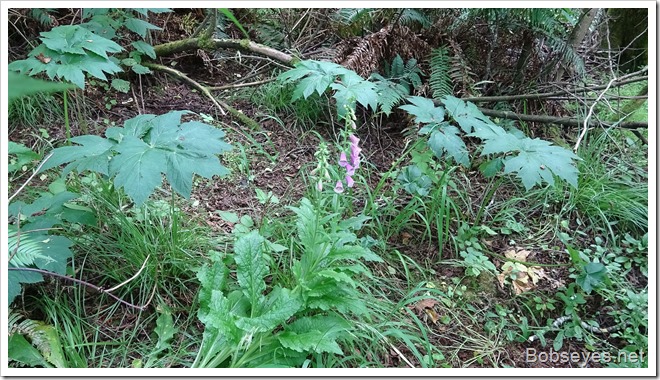 I moved up the trail sorta slowly bending over stuff so I could find my way back to my boat. This area used to be more open but has really grown over with stuff. I had to be real careful I didn’t get disorientated. 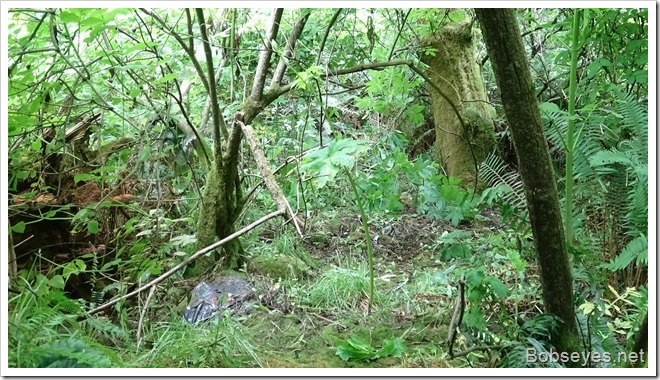 As I was headed back to my boat and almost there the grunting started again just in front of me but I saw nothing. I looked around a bit and found what I think is a deer bed so I think it was a deer making the sound. 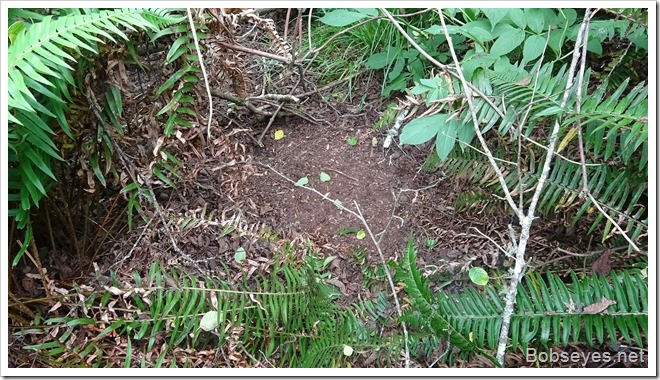 I did find my boat and got back on the water going down through here taking my time. 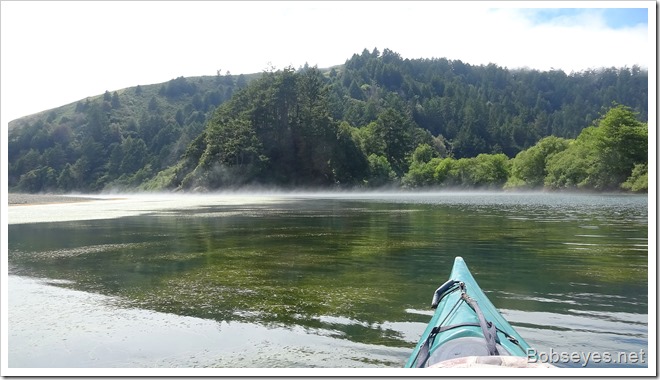 This time a couple of harbor seals where on the old redwood logs where I usually see harbor seals. 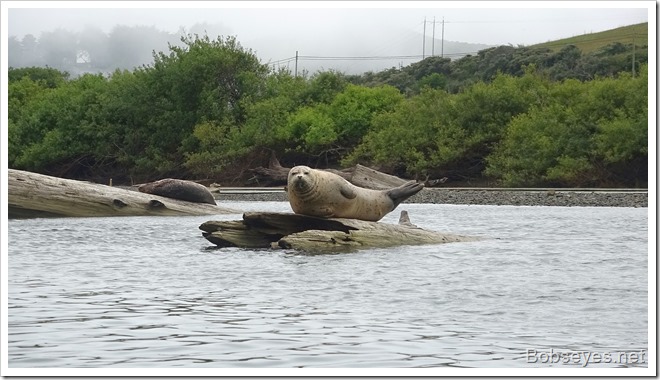 This one was watching me but didn’t seem nervous as I paddled on by. 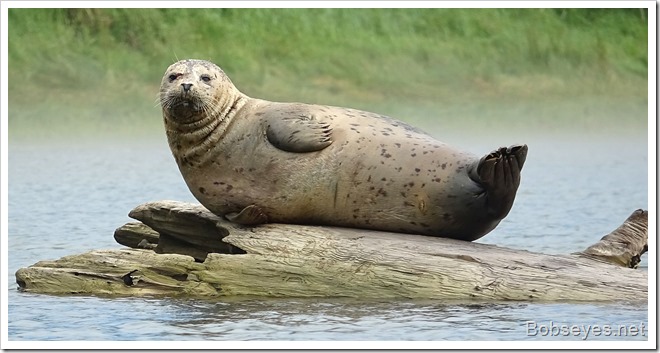 The fog was moving in from the ocean and getting thicker. 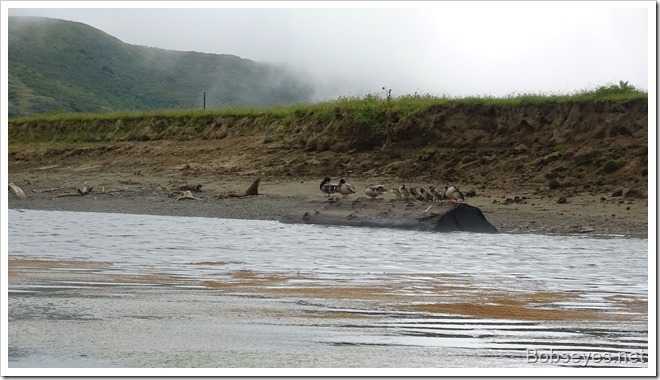 I talked with the two kayakers up ahead and said, interesting fog eh. She replied that it was mystical and I agreed. 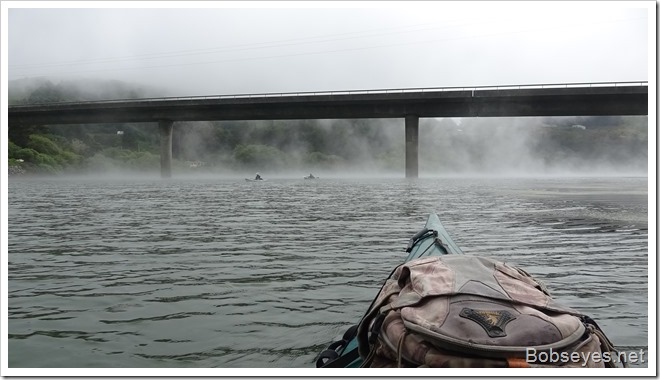 I paddled under the bridge to get into some more fog for a bit. 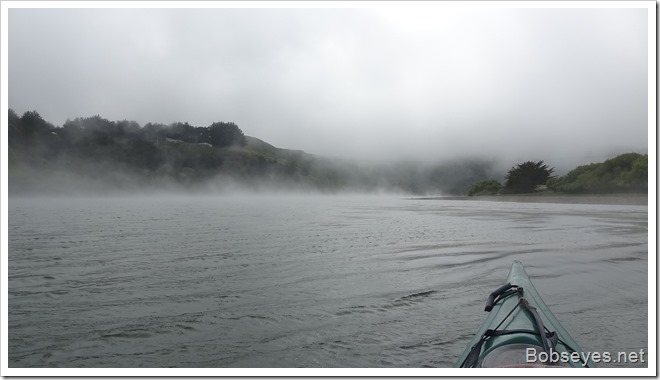 Then turned back to the bridge where I put ashore and pulled my boat out and went on home for the day. 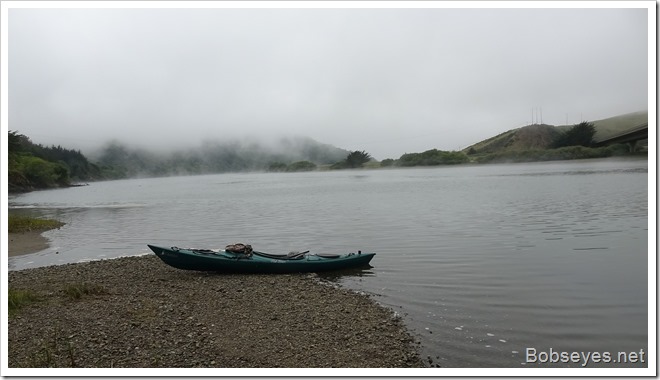 That was sure a nice day paddling on the river.

At home I puttered around a bit doing some chair hopping and taking it easy.

That paddle tired me out a lot so I never did get the energy to write a blog last night.

Today after checking on the chickens and taking care of their needs I rode on over to a neighbors place to help him digging out his spring as it was plugged up. We had to do a lot of digging and moving mud and clay and we almost got it dug out but will have to do a little more digging tomorrow. I forgot my camera so no photos of that.

All the digging really tired me out but I did get some good exercise, at least my body thinks so. It was a lot like playing in the mud and my shoes and pants were covered in mud.

Once home I change clothes and prepared a cardboard box for another chicken nest. I plan to move a little black hen I like onto some eggs tonight in just a bit, then I’ll have 4 hen’s sitting on eggs.

Nice day working away helping a neighbor with his spring.

1 Response to Mystical Fog Paddling Up the River and Back