But not without a bit of a problem

The sun was out when I got it going today. I went out and fed the chickens and was back in the house for a cup of coffee.

I was able to finally get signed up for my free smart phone and service and am now waiting for my phone to arrive.

Setting the van up for some work

I needed to change places with my two rigs today. I needed to get the Toyota out of the car port and put the van in it’s place to do a bit of work on the van.

I moved them both out into the sun to start off with. 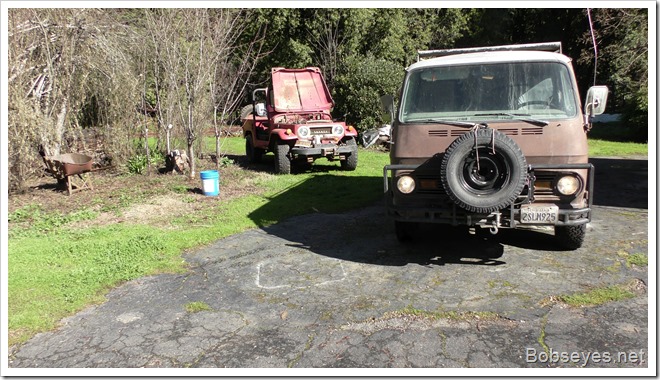 Looking forward to a drive

As long as I had tires and brakes on the Toyota I wanted to take it out for a ride up into the hills. I also wanted to get some more small redwood logs for my chickens so I put the chain saw in the Toyota and took off.

I’m stopped at the gate which I had to unlock to get through. 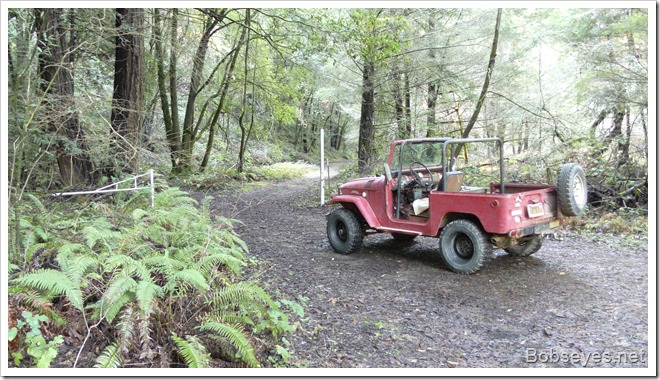 I drove across this creek to get to a spot where I could cut some small redwood logs. 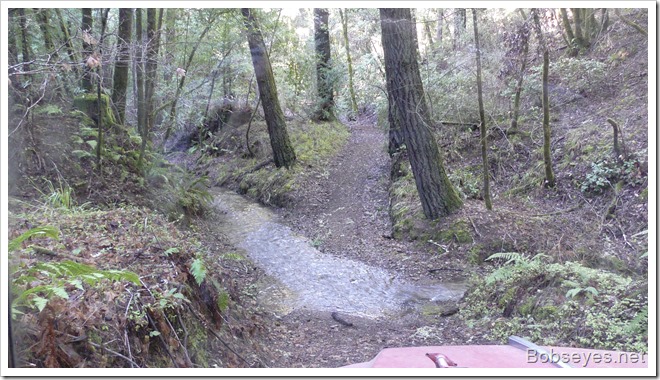 I parked here and got out to look for some small redwood logs to cut down. 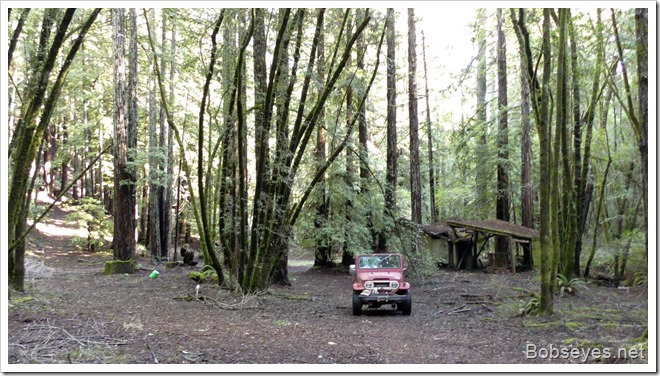 I walked up this road looking for small trees. 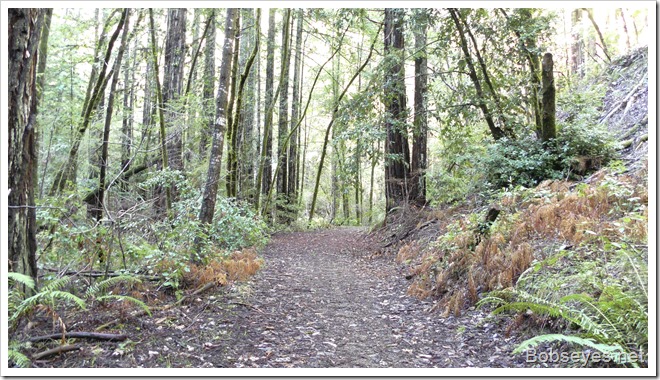 The creek was flowing nicely. 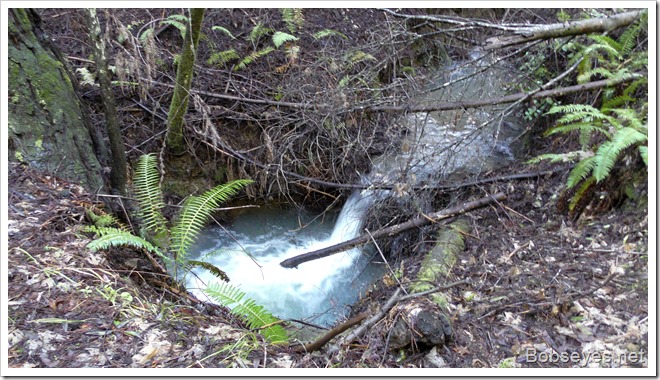 I didn’t go very far and didn’t find what I wanted so turned around and started walking back. 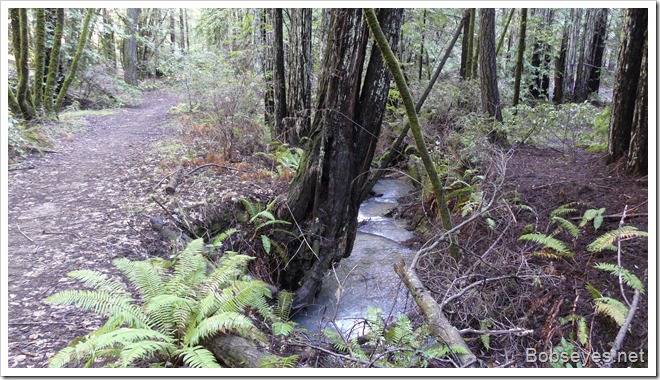 I looked down behind the Toyota and found some so drove down just behind the rig. 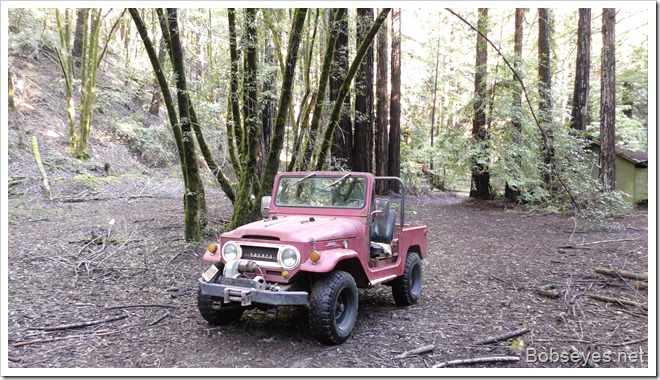 Got some redwood logs

I spent some time cutting the logs down and limbing them. I was going for a ride up the hill so I left them all there and would get them on the way back, at least that was the plan.

I put the chain saw in the Toyota as I might need it to get a downed tree off the road to get by and started up into the hills. I was really enjoying the ride in my resurrected Land Cruiser as it’s been out of commission for a number of years now.

I stopped here to clear this brush off the road. 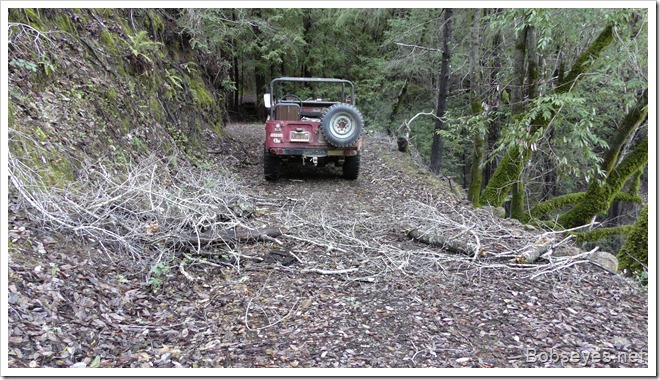 When I got back in and tried the starter there was nothing, no juice. 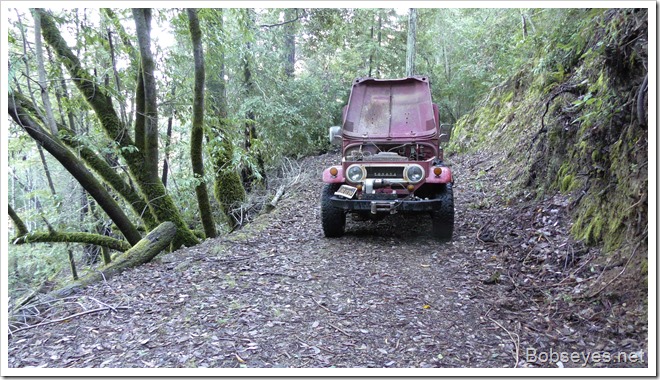 That was when I remembered I hadn’t tightened up the battery posts so I opened the hood to try hand tightening as I had no wrenches with me.

Well they were loose but worse than that I’d forgotten I hadn’t put the battery hold down stuff back on and the battery had moved onto the hot exhaust manifold and burned a hole in the bottom of it and let out all the acid fluid in one cell.

You can see the stuff to hold the battery down isn’t connected. I put a rope on the battery to keep it from sliding onto the hot manifold anymore and pressed the battery terminals down as best I could by hand. 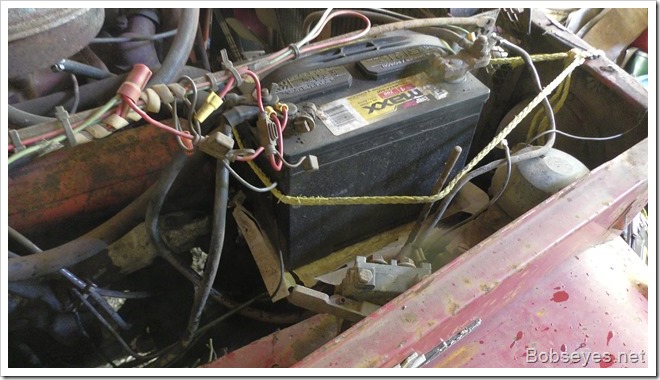 Would that battery start with one empty cell? I tried the key and I got a click so I went back and twisted and pressed the battery terminals down again.

I tried the key again and this time it cranked over the engine and got it started. I was amazed it would work. Now would it get me home if I hurried along?

I didn’t stop to get my redwood logs or close most of the gates and made it home with no trouble. I’m amazed again but happy I made it.

A break with the chickens

I needed to let the rig cool down before messing with the battery to see what happened so I let the chickens out to graze and sat with them for a bit. 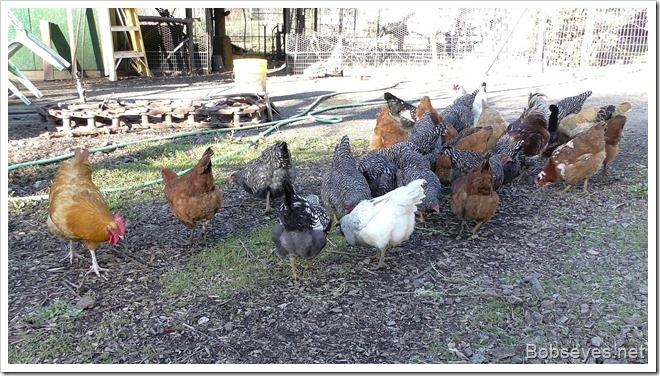 After that I removed the battery from the rig to have a look at the damage. At first I was thinking that battery is toast. But after a good break thinking about it I decided to try epoxy on the hole to see if I could get it sealed up. There’s lots of rough stuff around the big hole which should help hold the epoxy on. 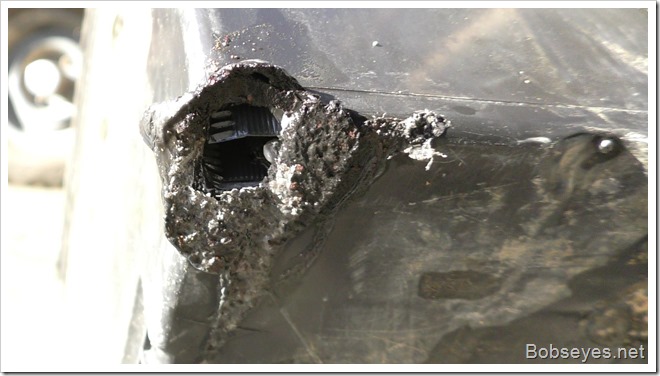 Do I have acid

But I would need some battery acid to do the job, so do I have some. I checked as I thought I had some extra acid from some motorcycle batteries I’d bought and had to fill. If I had the acid I’d try to fix the battery and I had the left overs in two bottles so I was good to go.

So I got my best epoxy out a JB weld type. At first I had the battery out by the garage but thought I needed a better spot to let the epoxy cure as it needs 24 hours and it’s cold and damp in that spot. I decided the back porch might be a better spot to do this repair so moved all my stuff there and applied the epoxy which now looks like this. 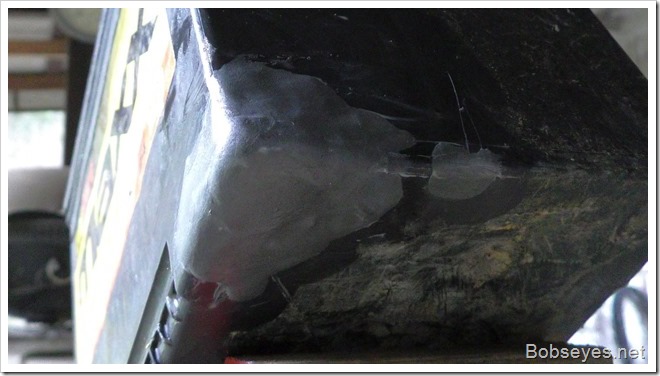 That was fairly easy to do. But I noticed it’s getting real cold out there tonight so I better go out and bring it in the house to cure like right now would be a good time.

I mostly spent the rest of the day hanging out with the chickens enjoying the sun after a bit of rain we had.

Even with the problem I had I still really enjoyed my ride in the old Toyota. We’ve done a lot together over the years.

(Visited 163 times, 1 visits today)
This entry was posted in Uncategorized and tagged 1968 toyota land cruiser, fixing a hole in a battery. Bookmark the permalink.