Mulching, Some Rain and Helping Barry Clear Downed Trees Off the Roads

I heard Barry outside this morning as I was getting it going. He had his chainsaws and was going up into the hills to remove the trees that fell across the roads during the last big rain storm.

I hadn’t eaten yet so I didn’t go up there with him.

Once I got it going I hauled more woodchip mulch to the garden. It started to drizzle real lightly, not enough to get wet so I continued hauling woodchips but eventually I had to get a cap as the drizzle was increasing slightly.

It wasn’t long before I had to get under some cover as I was getting wet as the drizzle had increased to a light rain.

I sat here for about a half hour waiting for the rain to let up. 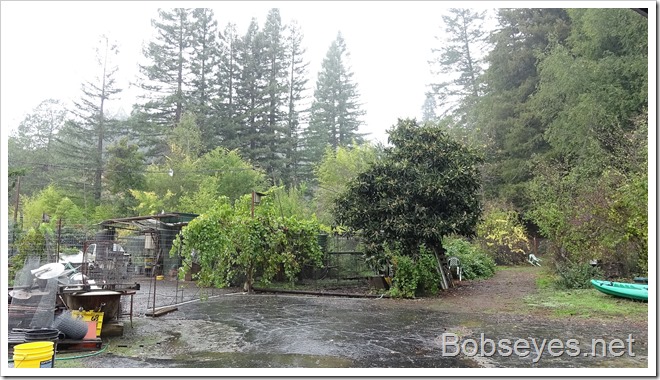 When the rain slowed down enough I hauled a couple more loads of mulch but was thinking I’d had enough of that so checked the dirt bikes gas and rode on up into the hills to see if I could find Barry by the sound of his chainsaws or the noise of his quad he was riding.

I rode up to the Guerneville overlook to have a listen but couldn’t hear a thing.

The Guerneville  overlook just after the rain stopped. 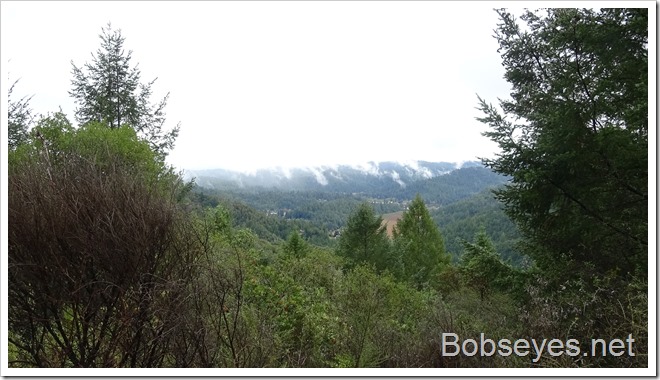 The small town of Guerneville is nestled down there in the trees. 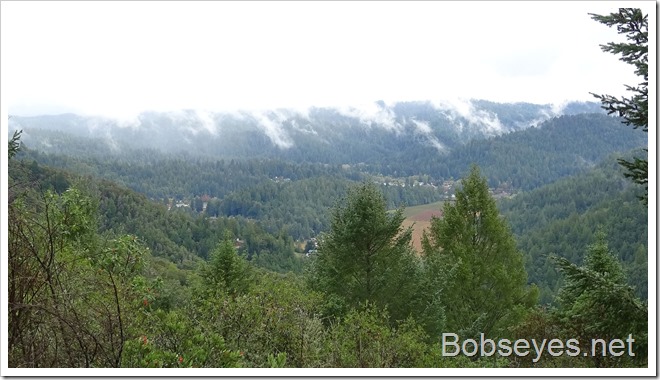 I rode on up the ridge and stopped to listen but still could not hear where Barry was. 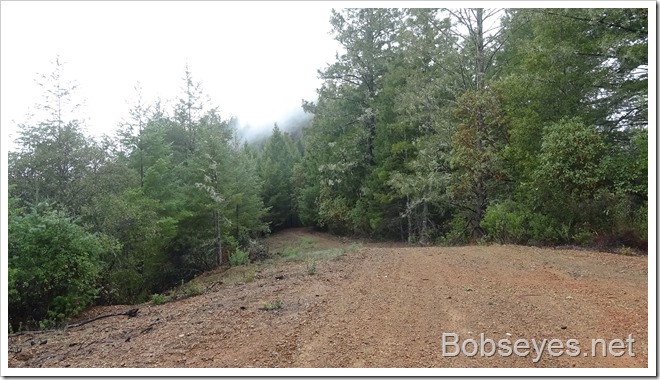 So I rode on up to the Top of the world and had a listen but still no sound of Barry working away.

The view from there looking west towards the ocean. 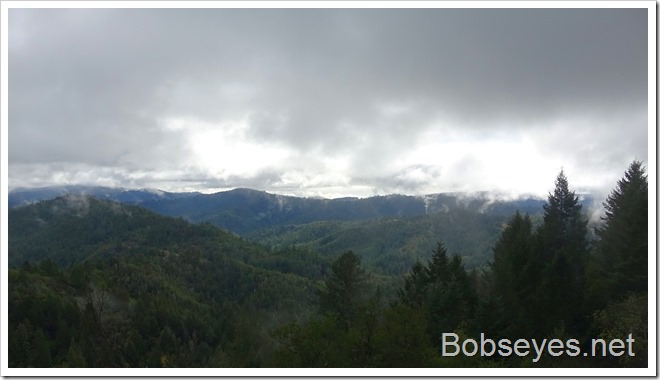 Throwing rocks off the road

So if he wasn’t up there he must be down below somewhere so I rode down to this spot to stop and  listen and throw some rocks off the road. 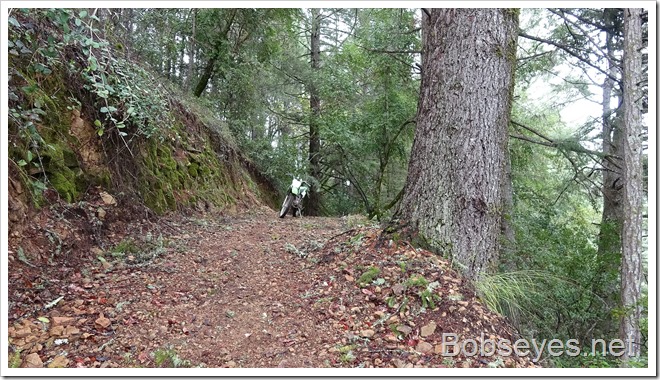 While I was throwing rocks off the road I thought I heard a chainsaw but it didn’t run long enough for me to tell where it was coming from so I threw some more rocks off the road and listened and eventually heard his saw down below me on a road coming up the hill.

I drove on down where the road came out and waited until he came up the hill. 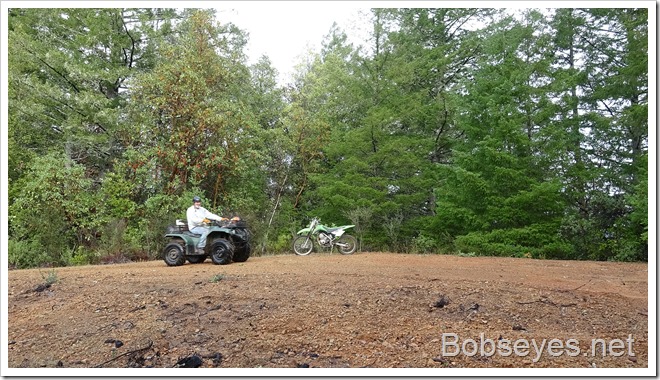 He said he was pretty beat from all the trees he cut from the road so I joined him and we rode on until we came to the next tree across the road. He cut and we hauled the tree off the road. 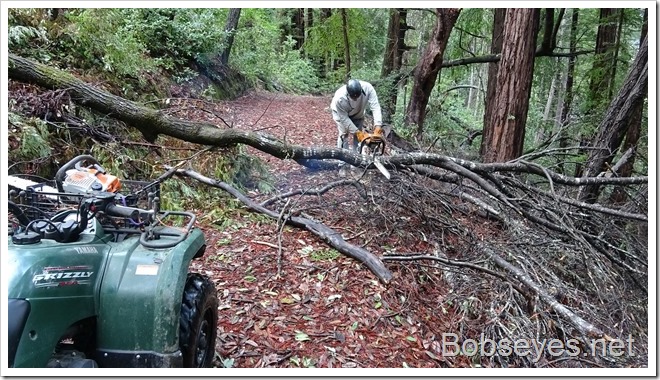 We didn’t have to go far to find the next road blockage. 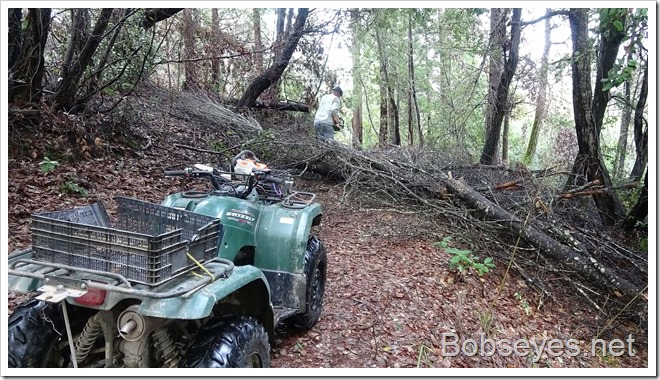 We continued doing that, riding on until we came to the next tree down. 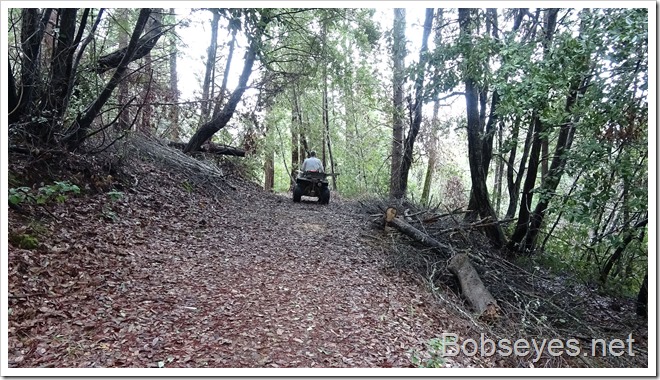 Since Barry was doing most of the work he was getting pretty tired out but there were still  more trees down. 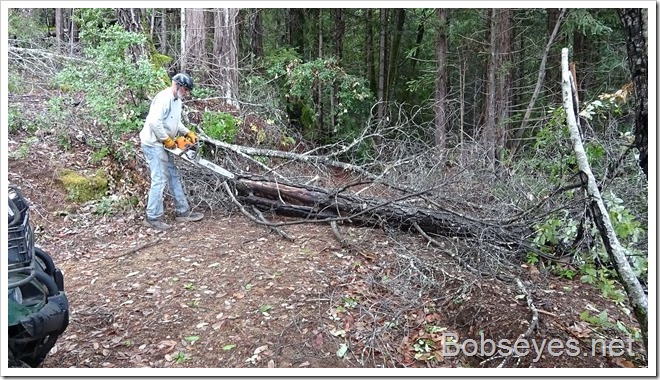 This was an easy one but there are more downed trees in front of his quad. 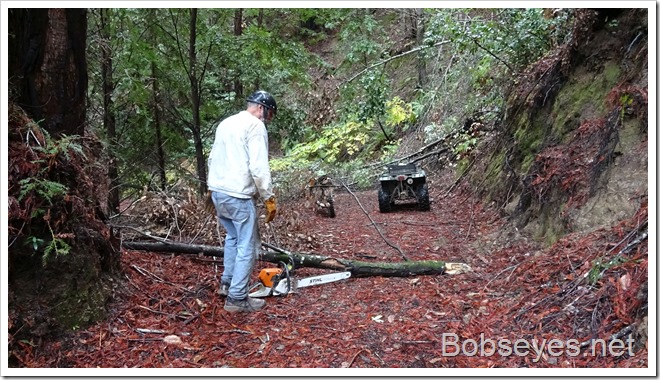 We finally made it back down the hill leaving some small trees across the road as Barry was too beat to do any more and besides his chainsaw needed sharpening, so we went back to my house.

Barry took off for home and I hauled some more woodchips to the garden finishing these two rows before I quit for the day. 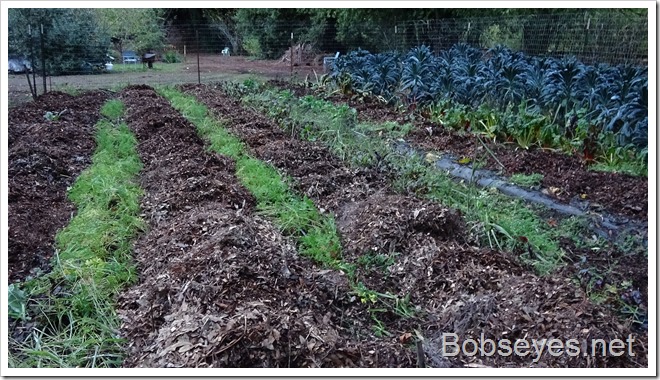 I made a good dent in the mulch pile but still have plenty more to finish that garden, but enough for today. I sat around enjoying the rest of the evening until it started to get dark. 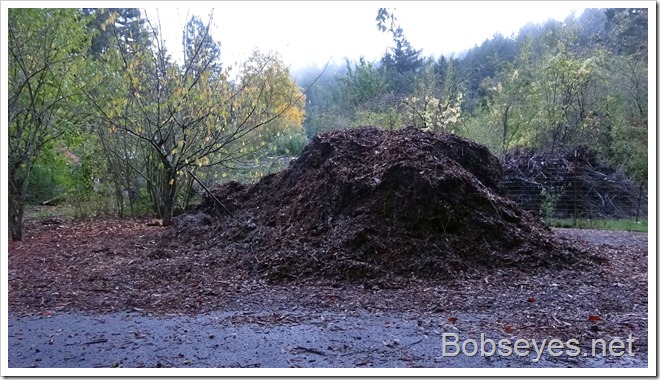 Carl in comments suggested I see if the van’s new brake light switch works or not by waiting until it got dark to do it, so I just did and they worked. Thanks Carl.

1 Response to Mulching, Some Rain and Helping Barry Clear Downed Trees Off the Roads