Hey the rain stopped for a bit

I needed to get a yak in so I headed on down to Jenner today. The river was up from the recent rains and flowing muddy. But the estuary is wide at Jenner so the river doesn’t rise too high, it just flows faster.

The sun was out and the wind was down as I put  my boat in the water. The river’s current was flowing fairly fast, so I headed on up the north shoreline to get above Penny Island, so when I crossed and the current carried  me down river, I’d be near the top end of the island..

Headed up the north side along it’s edges to stay out of the fast current in the middle. 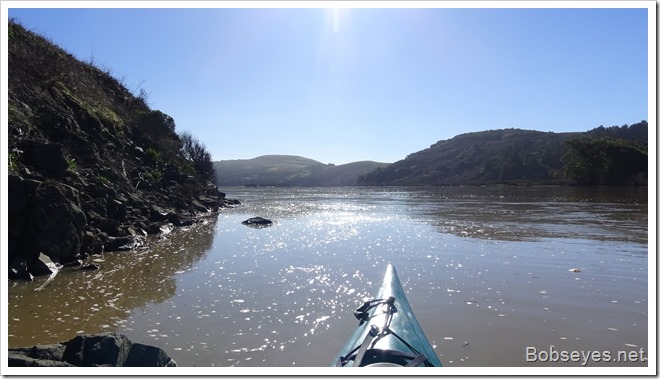 Lots of ducks on the water today

I crossed over to the island and headed up to the little channel on it’s upper end where I ran into these ducks. Mostly buffleheads and golden eyes. There were a few surf scooters mixed in there too. 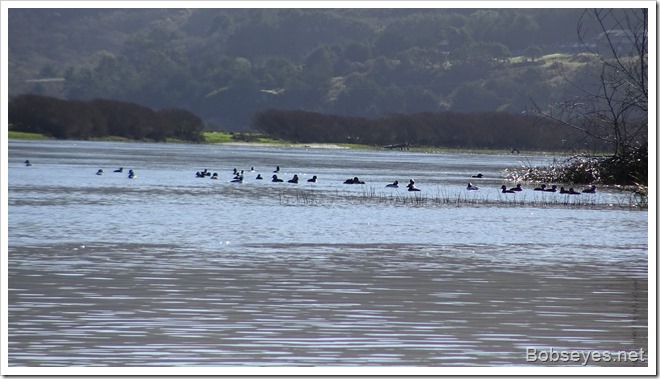 I pulled into the channel and sat here for a bit checking things out. It’s high tide, a high one at 6.7 feet, so the  water is backed up a bit. 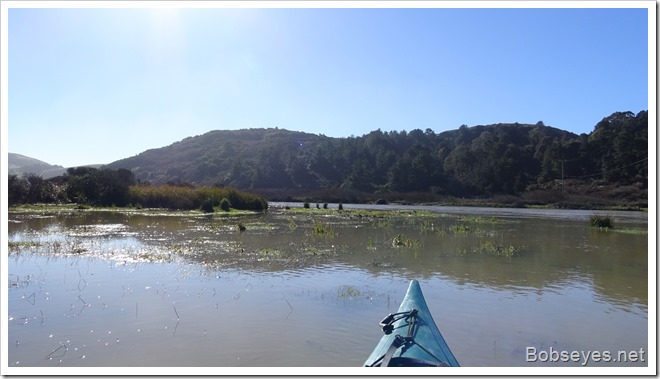 There’s an old air compressor in there

A big pile of wood debrie has moved into the little channel and will block it when the water is a bit lower. I saw a couple wheels in there and then saw the tank they were attached to. Looked like an old air compressor. 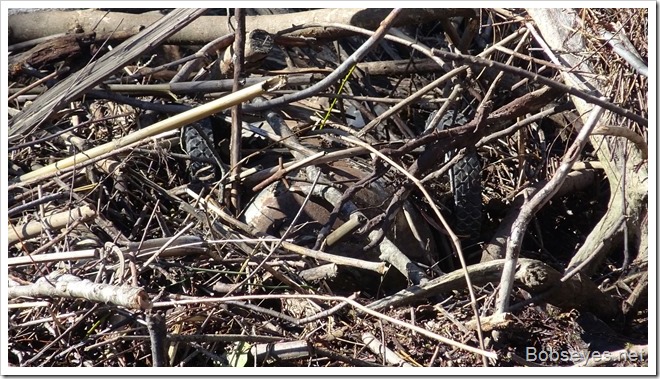 I spotted a couple kayaks too

I looked across the river from there and noticed this big redwood tree log that was at Swamp Rock trail head a couple hundred yards above this spot which had moved down the river to this new spot. There seems to be a blue boat in the upper pile of debrie. 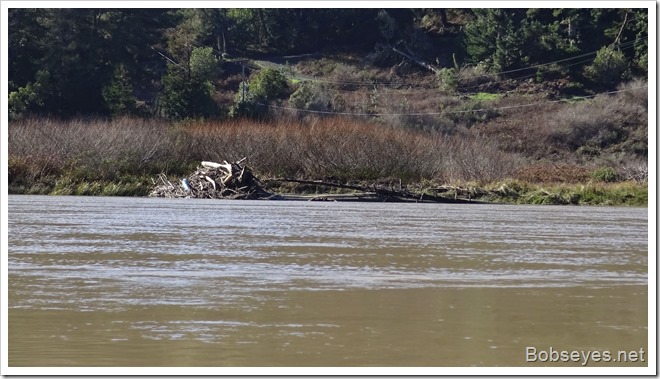 I crossed over the river to have a look. One blue kayak, but it appeared to have a small puncture in the bottom of it as far as what I could see of it. 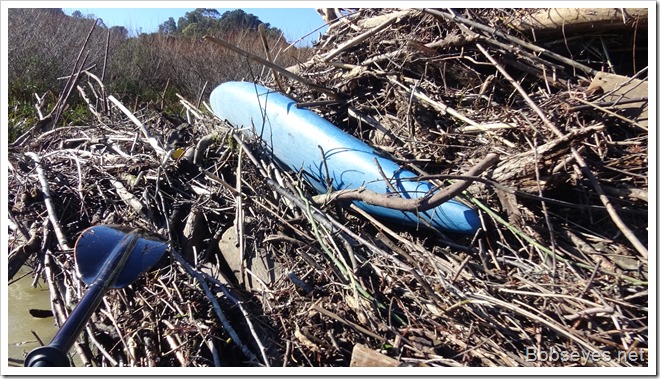 A good number of the boats that come down the river are messed up. I think people just untie them to get rid of them.

I continued on up along here and saw something move up ahead by the trees. I could see it was an otter, but it dove and I didn’t see it again. 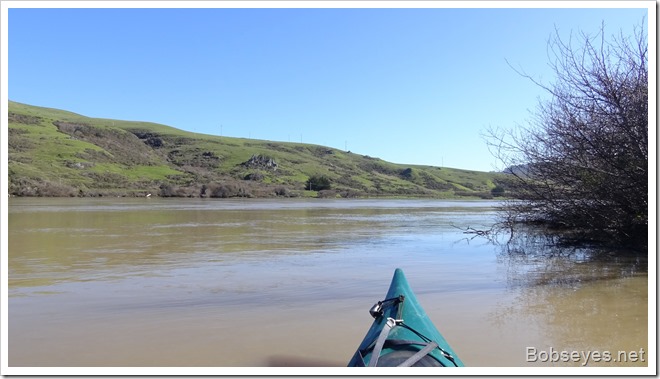 These things only live in salt water

I saw this thing floating out in the current, so I paddled over to see what it was. It’s a piece of plastic pipe with white foam around it. But the interesting part is what was growing on it. 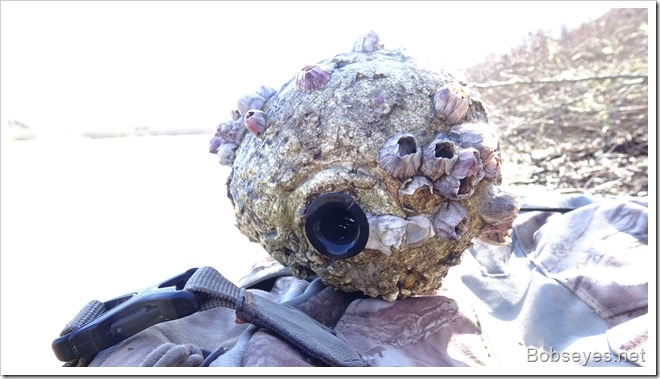 Barnacles only can live in salt water yet this was coming down river, not from the ocean so how can these guys live up the river. There are some dead ones and some live ones on this ball. I think this ball would have had to be submerged up river in a deeper hole where the salt water layer usually is and it had to come out of it recently as there were still some live ones on the ball. With the river flooded most of the salt water layer is lost, so they would die. The fact that some are still alive means they had to be down in the salt layer up the river not long ago. And their size is rather large which indicates they’d been growing in salt water for quite some time.

I continued on and spied this orange kayak in the bushes.  It looked like it might be intact, but I didn’t want to mess with it. John S. should be down here salvaging it? There you go John. I’m sure it’ll still be there if you don’t wait too long as I was the only one on the river. 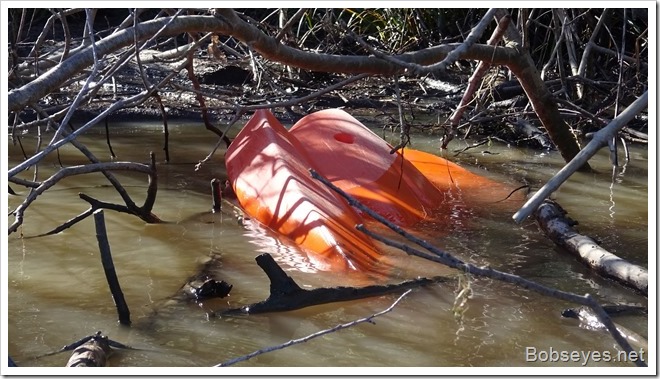 I paddled on up to the muskrat area and sat here and just enjoyed the day for a good while. 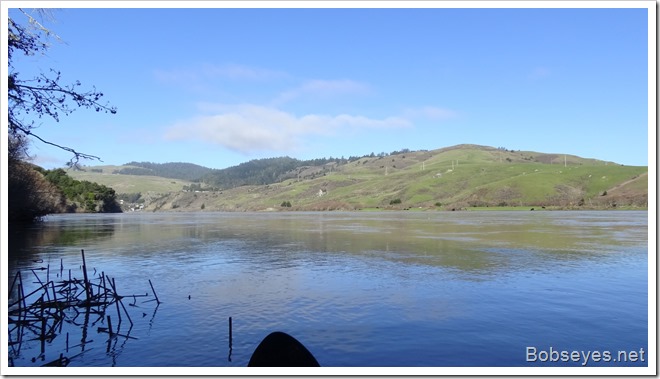 I could hear some geese across the river by the cows honking. 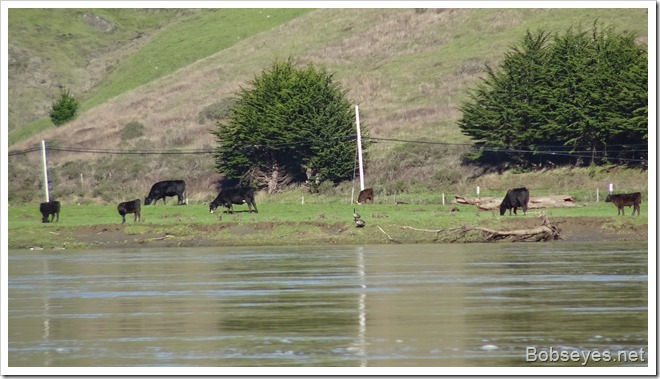 Eventually I crossed over to that side and let the current take me down along it’s edge while I looked for birds and critters. There aren’t a lot of birds along the shoreline today with all the muddy water. Remember I said the muddy water protects the fish that are coming up the river to spawn 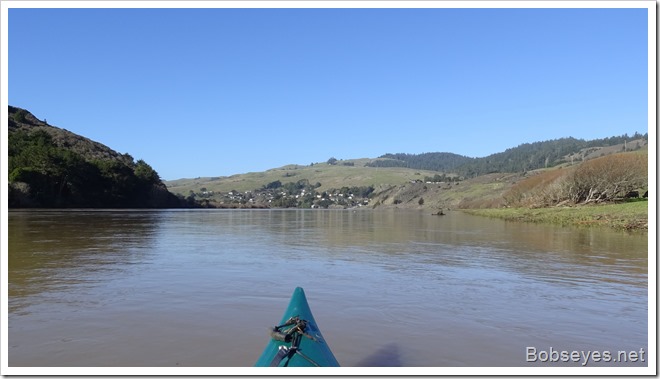 I do think there are spawning fish coming up the river because I heard at least to splashes of jumping fish which make their own sound different than other splashes.

I was watching this male merganser duck diving for dish and he came up with a small one. I’m amazed they can get them in the muddy water. 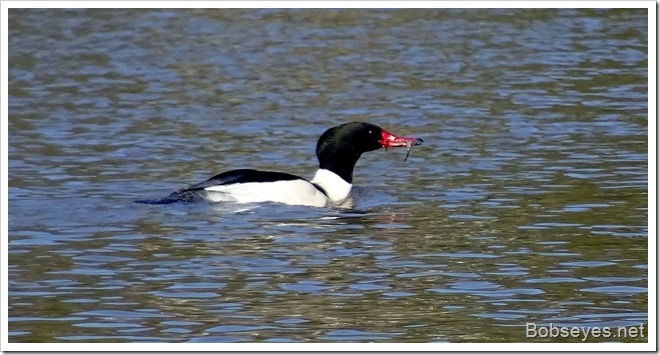 I drifted down the river in the fast current and headed for the island’s back channel, but stopped on the upper end channel for a bit. There were a bunch of these ducks feeding right in front of me as they didn’t know I was back behind a log jam. 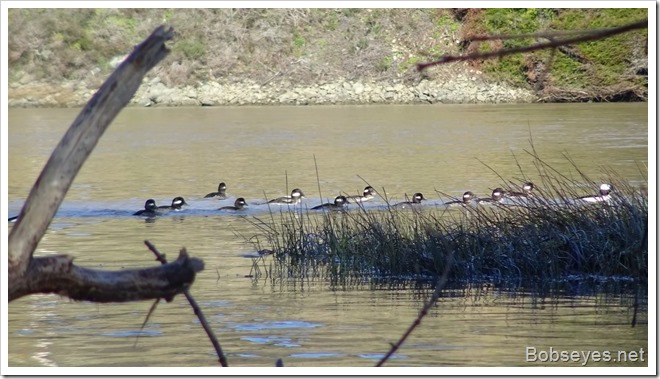 I headed down the islands back channel and paddled around the lower end of the island and headed back in for the day.