Mulch bag for the mower

Now that I have chickens I thought a mulch bag on my mower would be handy to bring cut weeds to the run as they are also full of seeds. The only problem was I didn’t have a mulch bag for the mower.

But while I was visiting Ray a couple weeks ago I mentioned a mulch bag would handy to have on my mower. He said he just happened to have one for his mower that he didn’t use and I could have it. Lucky me he had it stored in his shed so it was in pretty good shape for being so old as he’d had that mower for a long time.

Anyway today I had the time to get it mounted on the mower.

Need to make a bracket

Here’s the bag that needs to mount to the side there. It’s actually made to mount on the back but that can’t be done with this type of mower so it’s going on the side. 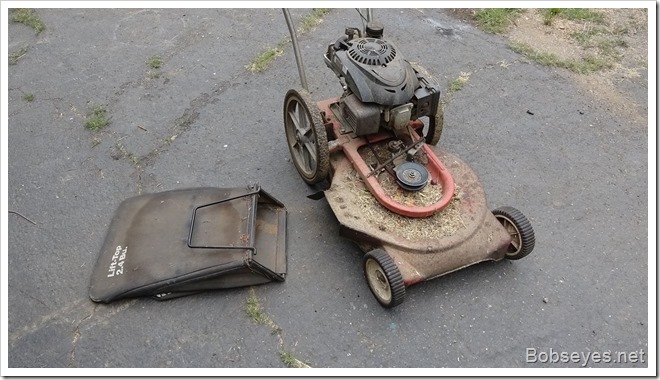 I needed to make a bracket that would attach to the bag so the bag could be easily removed to dump it so I constructed a bracket for the bag then figured out how to mount it on the mower and this is what I ended up with. 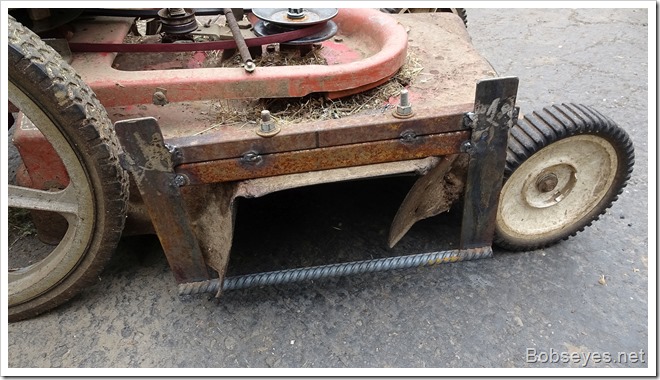 The bag drops right on the bracket and is easy to put on and off.

Here’s the finished product ready to try out. 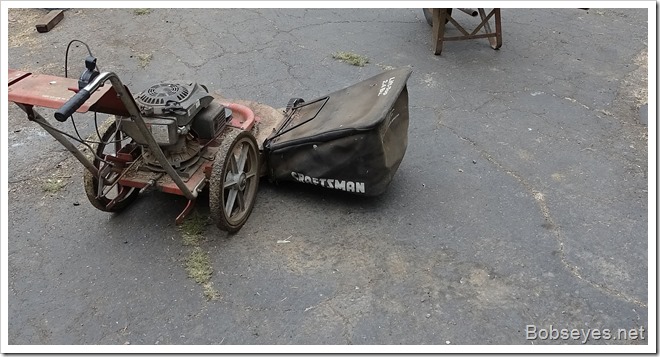 Giving the bag a test

I had some weeds I needed to get mowed that I hadn’t been able to get to so that’s what I did. The bag worked out rather well. Three of them fill the wheelbarrow. I just have to learn to empty the bag sooner as it fills up pretty fast. 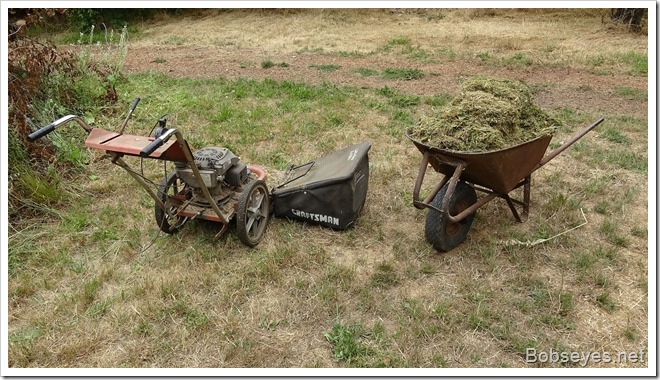 l dumped most of the grass in the chicken’s mulch run on top of where I’ve been digging up worms as I’ll mix this in with the dirt eventually. It didn’t take the little peeps long to find it. 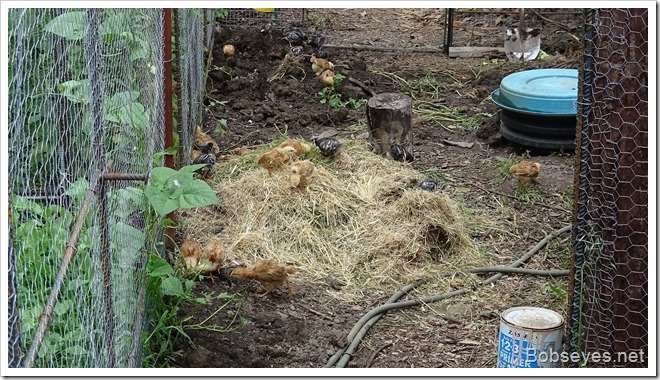 With all the feed ,the peeps were getting full so some of them went to the roost to digest. They only went this high so far on my new ladder. Some of them have been up higher but for now they seem to prefer this lower area. 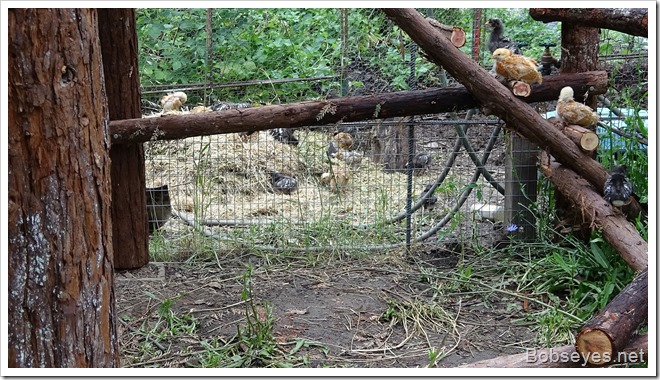 Continue prepping my van for a trip

One of the things I wanted to get accomplished today was to grease my van and check the fluids in the transfer case and transmission so I got the tools and grease gun out and did that.

I also worked on getting the 4 way flashers to go. They haven’t worked in years so I thought I’d work on them a bit. Yesterday I measured the voltage from the fuse that supplies power to it and it checked out ok, so I thought about it some more last night and decided I need to check out the blinker pod which is the pod which is that one in he upper left. The turn signal flasher is the same and on the bottom left. The trouble with the 4 way flasher pod is it’s hard to line up the prongs on the pod to fit the socket in the fuse block that it plugs into as it’s tucked up under there.

Checking out the pod

I removed the pod and thought it came out of the socket too easy like maybe it wasn’t plugged in right. I measured the pod with my meter and also checked it against the turn signal flasher unit as it’s the same. Both flasher units measured the same so the pod should be good. 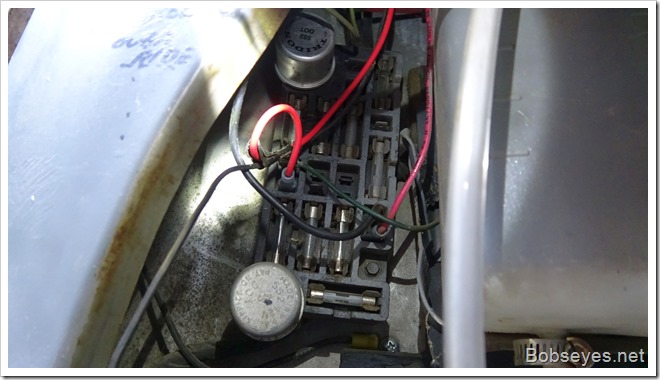 Had to fiddle with it and now it works, but I had more to do

I fiddled with trying to plug the unit in several times and would test it and no go, but finally after more fiddling and being very careful it felt like it might have going into the socket properly. I turned the switch on and I now had blinker lights on the dash.

I walked around the van to check to make sure all the lights were working. The front left light was barely working, very deem it was.

So I pulled the light bulb out and had a look at the solder end contacts on the bulb. You can see that the solder contacts are totally flattened out and that’s why it’s not making good contact. All those back washboardy roads take their toll. 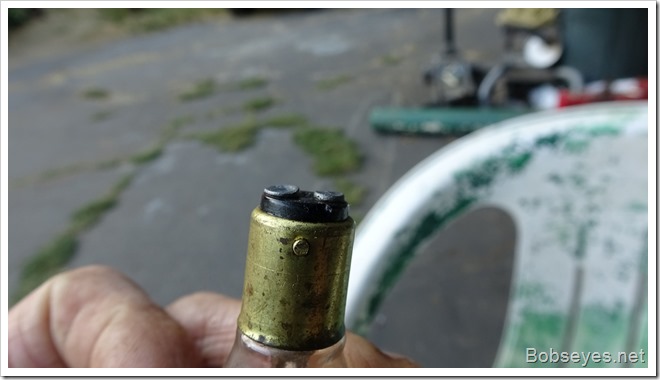 I built up the contacts but that didn’t work out

I got the soldering iron out and added a bit of solder to each contact. But when I tried to put the blub back in the socket, it wouldn’t fit, so I just got a new blub I knew I had and put it in and all is well. I will save that blub for another larger socket in the back which I might need some day. Into the repair parts with it.

I was ready for a nap by then so after I washed my greasy hands I napped a bit.

A pie from Dominique’s Sweets

After my nap I went outside again and found this apricot pie on my car’s hood. Yummmmmmmmmmmmmmnnnnnnnnnn.

Dominique who does Dominique’s Sweets and sells mostly at farmer’s markets made me this delicious apricot pie. She’s also my partner in the chickens as I need someone to tend them when I’m away on a trip.

Needless to say I went back in the house and had a piece and boy was it good. She sure knows how to bring out the flavors. Looking good eh Patsy. 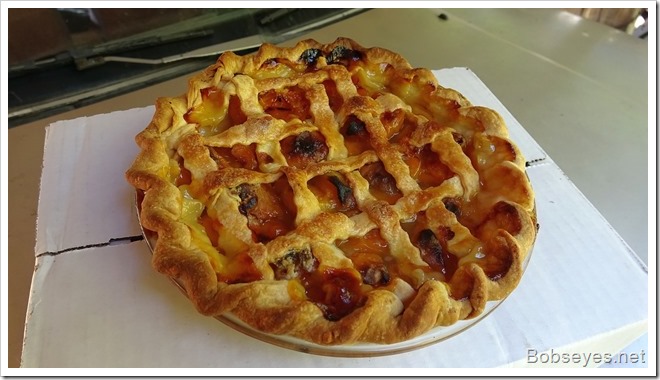 It wasn’t easy, but I was able to stick with only one piece for now. :O)

Just before dark I went out and tended to the chicks. Water in the containers and feed in their feeders. I also noticed two of the little black ones were outside the run which they shouldn’t be. Once they get out they mostly want back in with the flock. I looked for the place they got out but couldn’t find it right away.  A bit latter I looked again and found where they had been taking a dust bath and removed some dirt by a gate and got under the rebar. Some of the black chicks are still fairly small so they can get out, but soon as they grow a bit more it won’t be so easy. Until then I need to keep and eye on them.

That kept me busy all day and that was it.