All this work is wearing me out

I was planning to go kayaking today, but when I went outside to get ready I sat down for a bit and decided it was just too nice a day to leave the yard, so I stayed home and worked on the garden getting it ready to plant.

Here’s an old stump with some roses blooming. 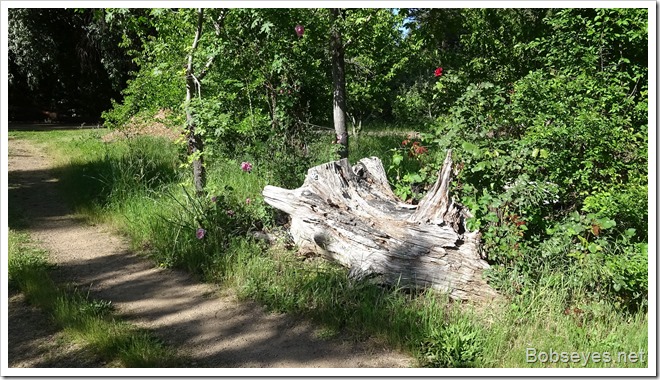 I sat around for a bit and eventually got to work moving tree mulch to the new garden enclosure.

I spent a good part of the day moving mulch and was getting tired out. I only had to move it about a hundred yards/meters to this spot with the wheelbarrow, but filling the wheelbarrow up scoping up the mulch was wearing me out.

Actually I was already pretty worn out from doing all the work on previous days. Mulch in the garden. 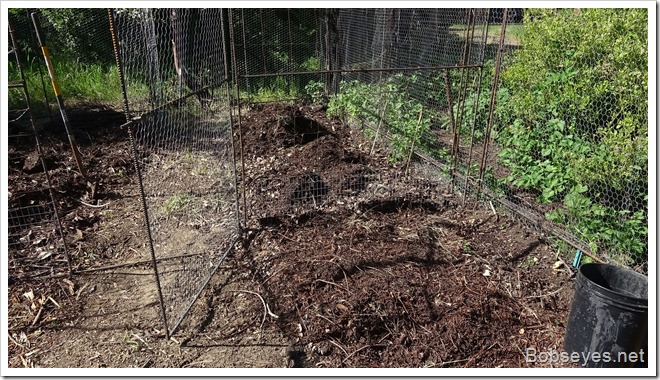 Tom moves my new chicken coop to my yard

I was sitting around chair hopping when my brother Tom came by and said let’s get the coop moved as he had the back tiller off the tractor so it was ready to go.

We went about a half mile to get the shed out of our old apple orchard.

Tom’s backing in to hook up the shed. I’d bolted some skids under it a couple weeks ago, so all we had to do was hook up and head on out. 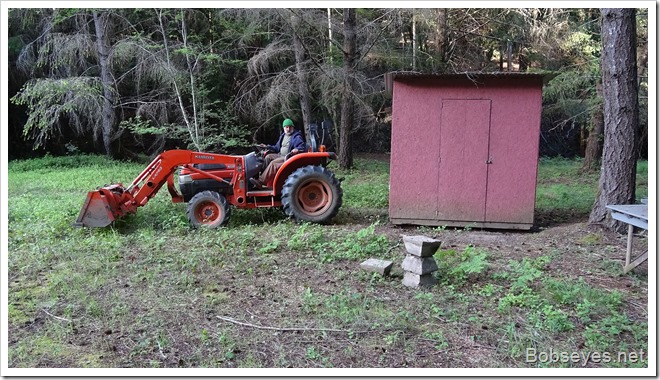 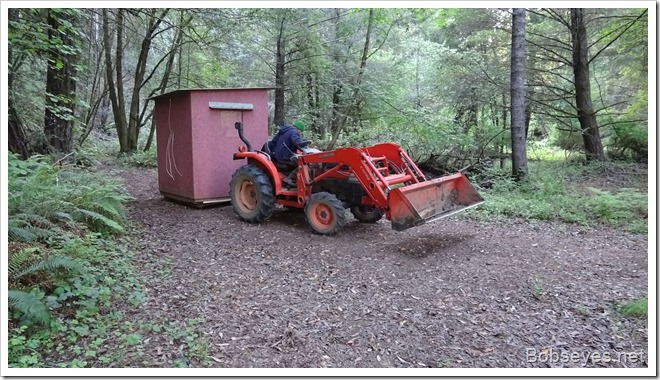 We had to cross over the road to get into my yard. That’s one reason we were doing it in the evening as there wasn’t much traffic. No cars came by as we crossed but just as we finished about 4 cars passed on by. 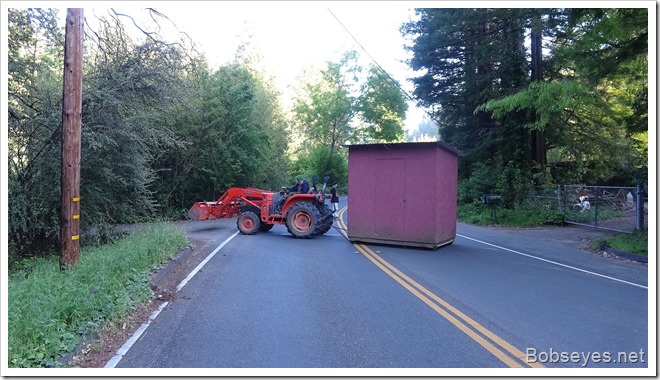 Tom’s moving the coop into my yard. 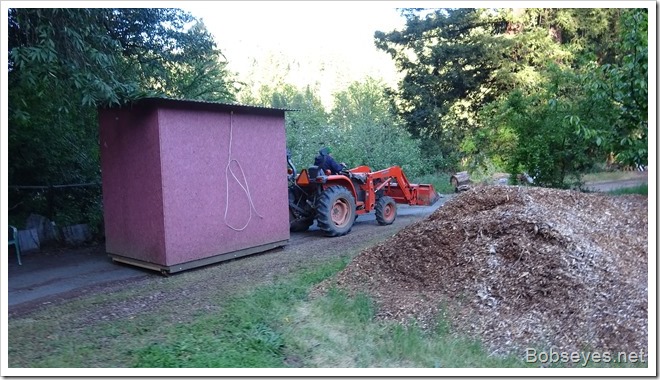 Because of the tight spot he could only put the shed close to were I want it. 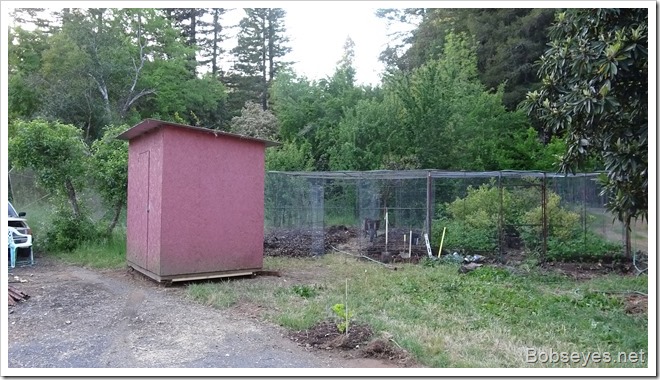 So I had to use the wrecker bar and a block to lever it into place on it’s new blocks. 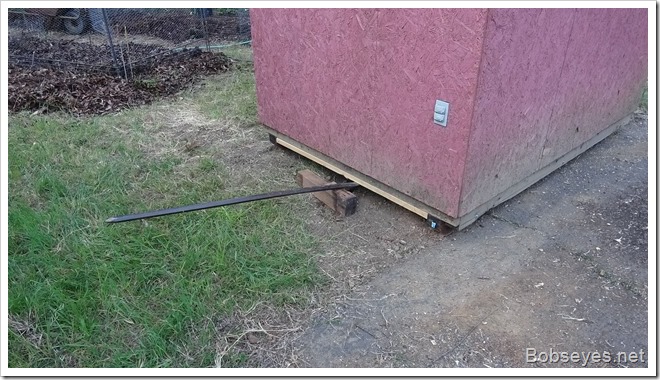 It needs a coat of paint, maybe green would be nice.

Just too tired out

I was beat when I went in the house and just ate something and went to bed without writing a blog.

Almost to sore to move

I was thinking of going kayaking today, but when I got it going, I could hardly move and my body felt like a truck had run over it. No pain pills for me as what’s in them aggravates my corn problem so I have to tough it out.

I sat in the yard and decided planting the garden wouldn’t be too hard on me as most of the mulch was moved. I added a bit of dirt from some mulch and spent the day getting seeds in the ground.

No dirt biking for me

My brother Barry came by with his dirt bike. Seems he has a flat tire. He was able to just air it up. He asked if I wanted to go for a bike ride, but my body hurt so much I declined.

I’m planting the seeds directly into the mulch just to see how they do in this forest mulch. You hear forest mulch is too acid for garden stuff, but I think people are wrong about this as lots of stuff comes up in my blueberry patch  and grows real well without me doing anything to the mulch except watering it.

Here I’ve got my seeds laid out and am getting them into the ground. 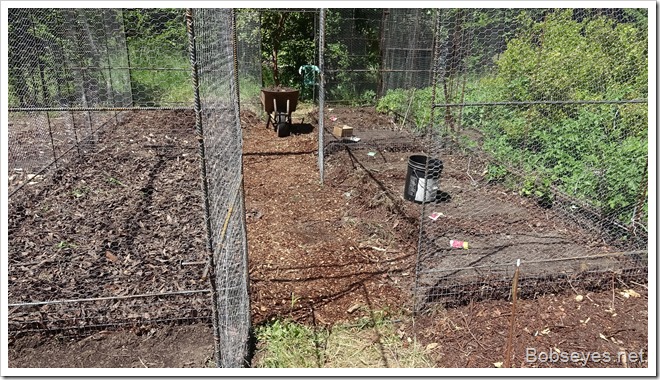 I covered the seeds with a thin layer of redwood seed mulch to help keep things moist as the seeds germinate. The squirrels ate all the redwood seeds last fall.

I planted some of the bigger stuff outside the enclosure, like squash and melons and tomatoes. I put the tomatoes outside as they may not like my overhead watering. Some of the water from the enclosure makes it out to this spot, but not too much. 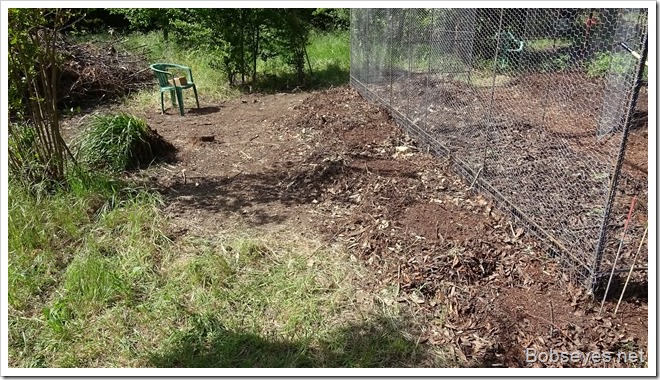 Turned the water on the seeds

When I was finished getting all the seeds in the ground I turned the water system on and wetted things down good. 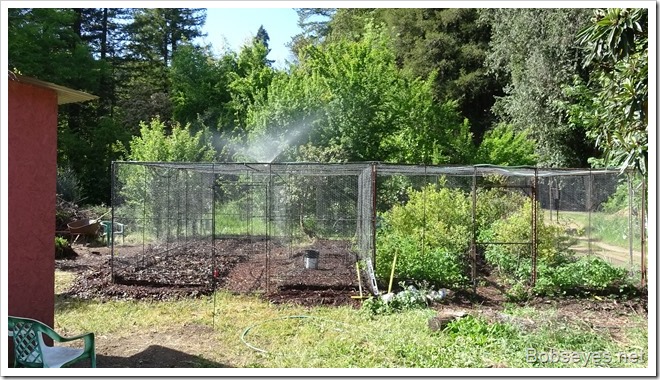 In the evening I harvested some potatoes out of my blueberry patch. All I did was stick some taters in the ground last fall and haven’t done anything to them.  It’s early for potatoes, so they are mostly small and young ones. 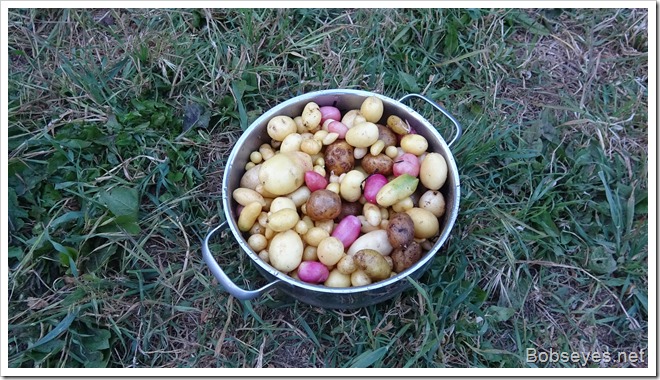 It got dark shortly after that and that was my day. I’m going kayaking with Ray tomorrow just to take it easy.