Not giving up yet

I got some good suggestions in comments from last nights post and I had some more ideas how to break the tire beads from thinking on it last night. Thanks for the helpful comments.

I thought I’d try some more stuff as it was a warm day and it would be hot if I drove over to the valley to shop at Harbor Freight and I’m stubborn a bit too.

I figured I could always drop my brothers tractor bucket on it and break the bead if all else fails but I was wrong about that. I could hear my brother running his tractor across the street.

So first I decided to try breaking it with a  heaver rig so I got out my Toyota and tried but no go. 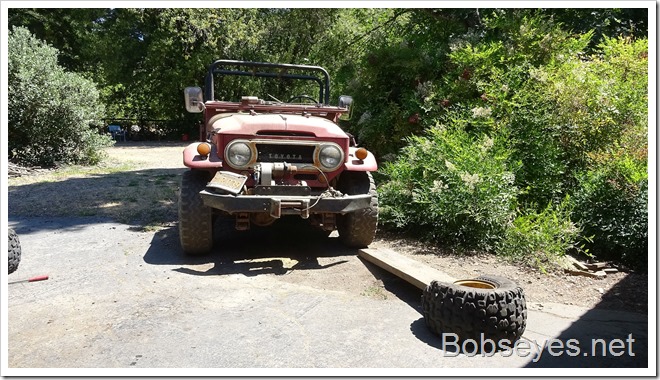 So someone suggested I use a Sawsall to cut a hole in the tire which gave me an idea.  I didn’t think that would work to cut the bead because you can’t get the saw into where the bead was and I was also thinking they might have some wires in there to cut too which I didn’t think I could get to to cut.

I cut into the tire with my knife but quickly ran into a big problem as knives don’t cut wires well. I used my pointed wire cutters to try to cut the wires but only got a few of them and could not get the wire cutters into the bead area to cut the rest of the wires. I also found out the wires were hardened and when I tried to cut them they didn’t cut but just snapped because they were so hard. 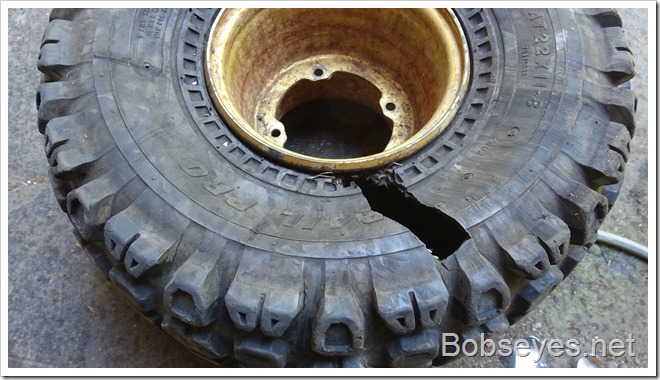 So I next tried running the Toyota tire up on the side but that didn’t break it either. I tried several times but no go. 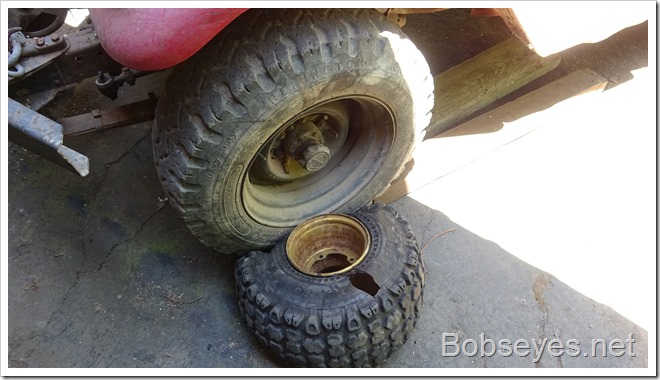 OK I’d had it so it was time to try my brother’s tractor bucket as that should do it. So I took it over to his tractor and he helped me try to get it off but again no go.

Fifth try and some success finally

My brother suggested I try cutting a bigger hole in the tire and maybe just cut around the rim to get the tire off so I could work on cutting the bead off somehow and after giving it some thought I used the Sawsall to cut around the rim which worked fairly well without too much trouble. 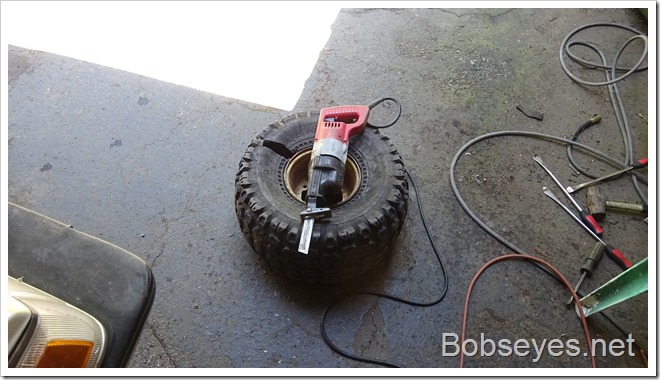 So I cut around the rim and removed the tire. 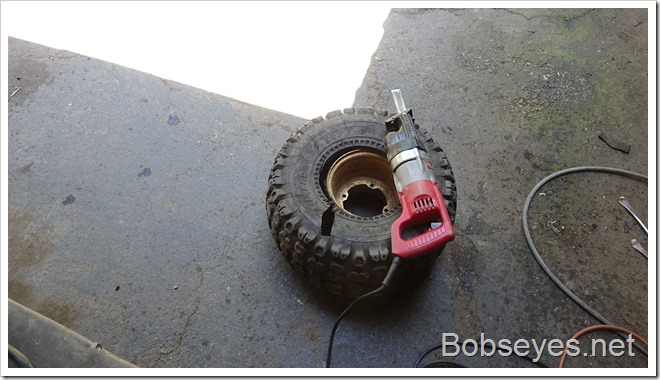 Here’s what that stubborn bead looked like. It was tight on the rim and I couldn’t get a bar under it or behind it. 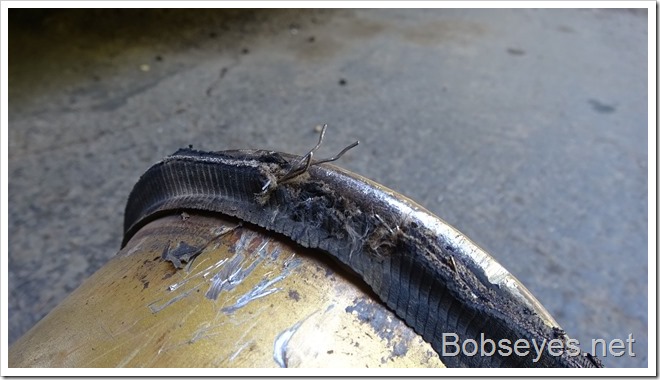 I tried hard to pry the bead but it wouldn’t budge. 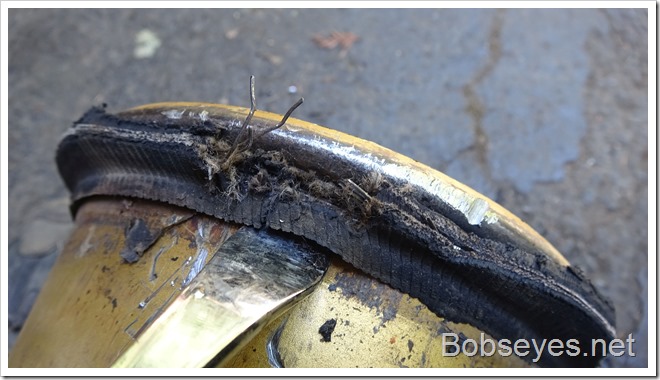 See all those hard wires that weren’t cut yet, I had to get them cut somehow and my pointed wire cutters wouldn’t get in there enough to cut them. 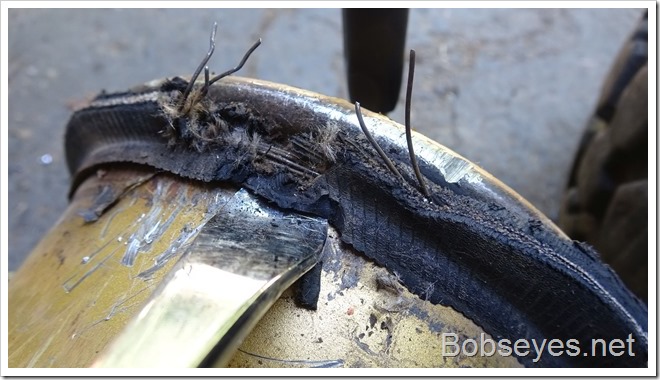 My brother does have a die cutter if I needed it but first I’d try what I had as he was busy on his tractor. 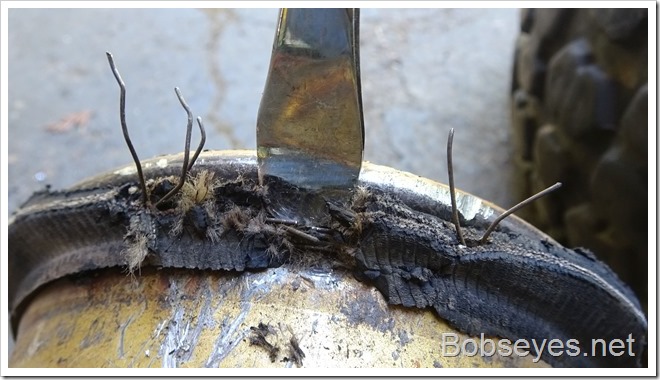 And finally I broke the bead 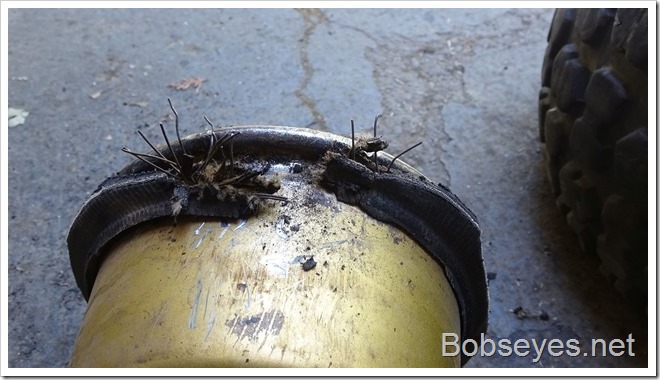 It was a warm day and I was tired out from all the work so I napped a bit and took it easy for awhile.

I checked on the peeps and they were all doing well. 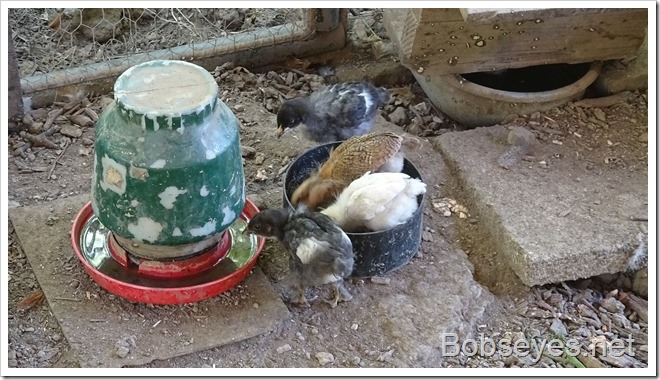 Then I went out to the old well and did some more sediment removal. Once I start the water the chickens come over for a drink of water. 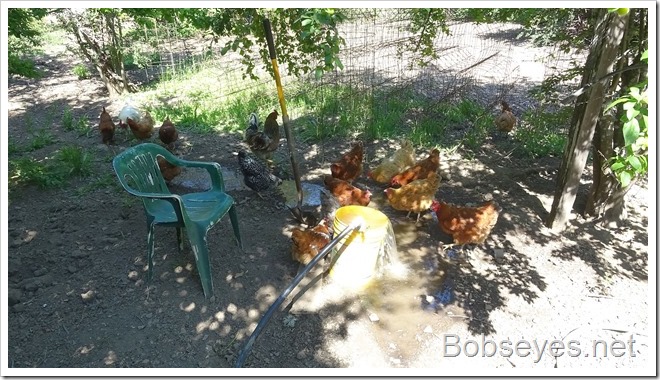 After working on removing the sand with a water jet I think the better way to do it is with air, which I did try early on but I only have a small air compressor. To do the job quickly one would need a trailer  mounted compressor. I can’t think of anyone I know that has one and the rental yard wanted 155 bucks a day to rent it and I don’t really like the rush of a rental but I think the air might work better than the water.

Late in the day I went into this garden of my brothers a picked some very nice weeds for the momma hens. The ground is nice and soft so the weeds are  easy to pull up. 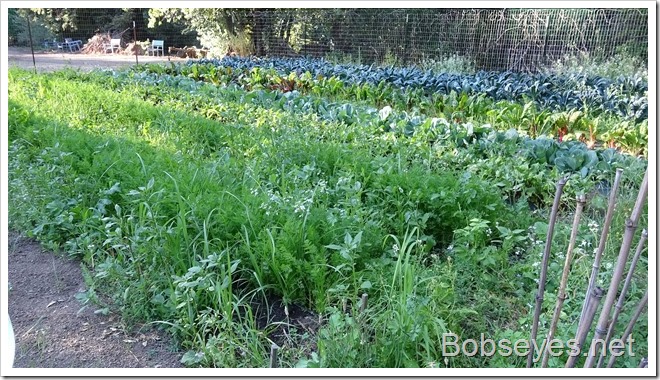 I took them over to the momma hens and peeps. 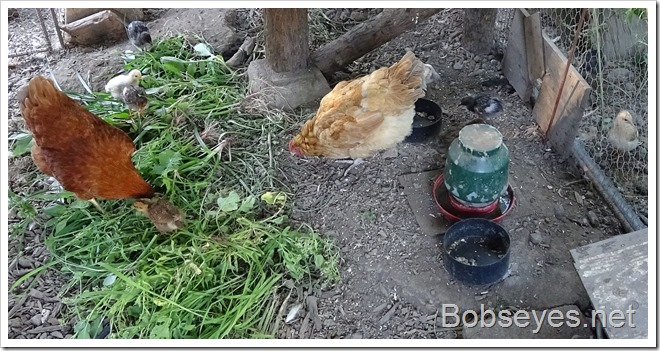 And the last thing I did was clean off the rims so I can mount new tires on them which should be a lot easier than taking the tires off the rims. 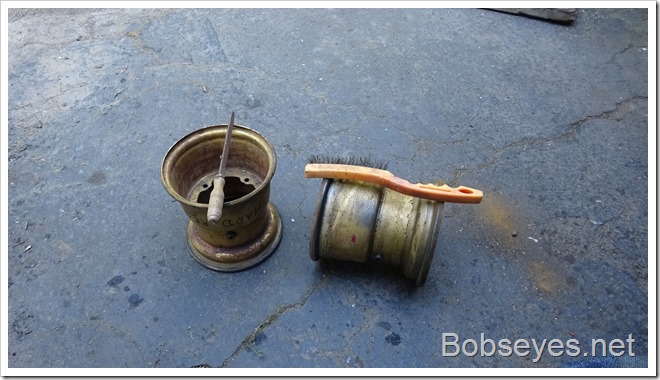 1 Response to More Rustling With the Quad Runner Tires