More Mulch and Puttering Around the Yard Getting Stuff Done

While I was doing some chair hopping around the yard this morning I noticed we got some more mulch so that means I can use a bit more of it to mulch stuff. 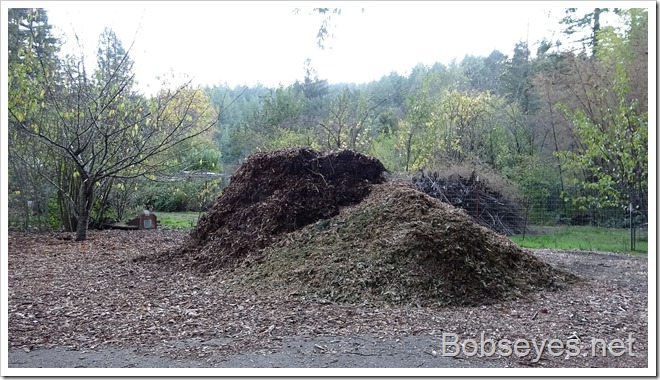 Some tree trimming guys that work for the power company came by to do some tree trimming and my brother Tom got them to dump the woodchips here. They are glad to dump them otherwise they have to drive a long ways and pay to dispose of them so that’s why we are able to get lots of woodchips, especially since we live in a forest where lots of trees need trimming around the power lines, often.

I was sitting in one of my chairs when Tom drove up in his side by side and said he had a big problem with his little truck. He said the right front and rear blinkers where blanking and wouldn’t shut off even with the key removed. He had to disconnect the battery to shut them off.

I said let’s go have a look.

We got his truck manual out and found where the blinker relays were and fuses but got no where with that. Knowing the emergency blinkers are connected to the turn signals I asked where his emergency switch was located.

The switch was located on top of the steering wheel column. Was it on or off? We fiddled with it and found out it had been accidentally turned on and was causing the problem. It did have a problem as it was only turning on the right emergency lights and not the left ones too.

We looked at why the emergency flashers weren’t all working but didn’t figure that out and Tom said he didn’t really need those emergency lights working anyway so the turn signal problem got fixed. He said he likely hit the switch when he reached in from outside to remove the keys.

Tom said he’s harvesting potatoes and did I want some. Sure, but I only need the rejects. I put them in sacks like the one on the ground and store them in the bottom of my refrigerator and they keep for a long time. Tom’s helper Steve is washing the dirt off the freshly harvested potatoes. 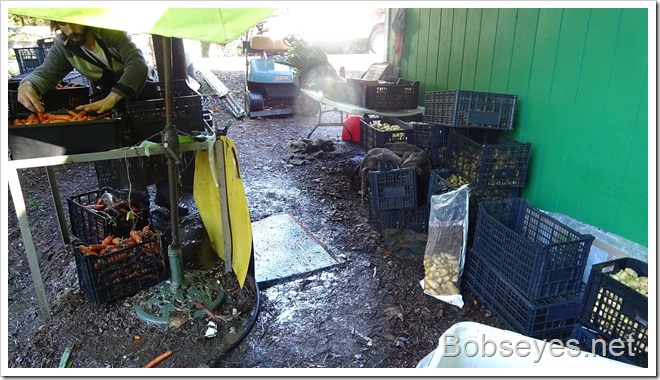 After that it was back to  my  house to chair hop some more as it seemed like it was going to be a puttering sort of day.

This chicken water feeder has some holes in the top so I got out the silicone and repaired it as I will need it to water the chickens that I will need to butcher soon. I put it in the sun to cure the silicone. 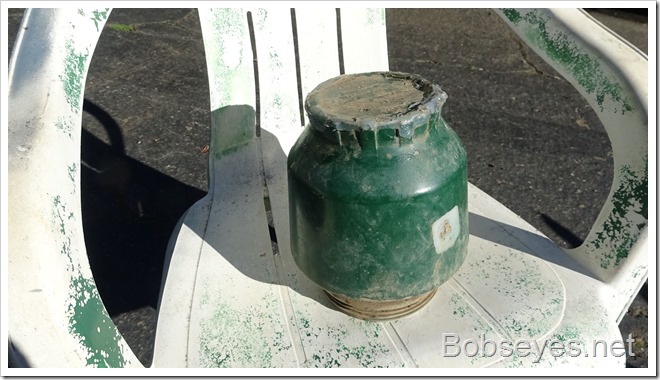 The sky and the forest

While I was sitting there working on that I noted the real nice blue sky up above. The blue contrasts with the green of the forest trees nicely. 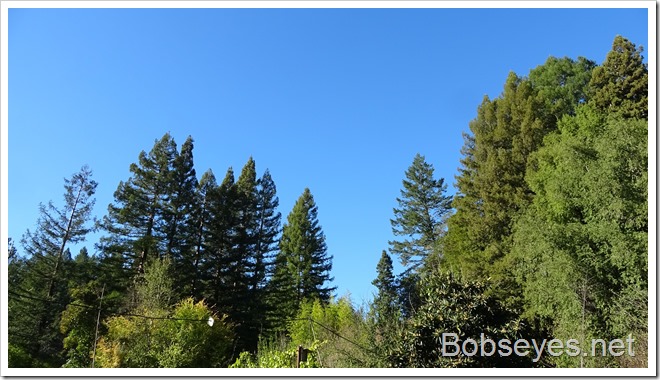 One of the main things I wanted to get done today was get the temperature gauge bracket hooked up behind the dash. I’d forgotten to do this about a month ago and it would finish up the new gauge installation job. 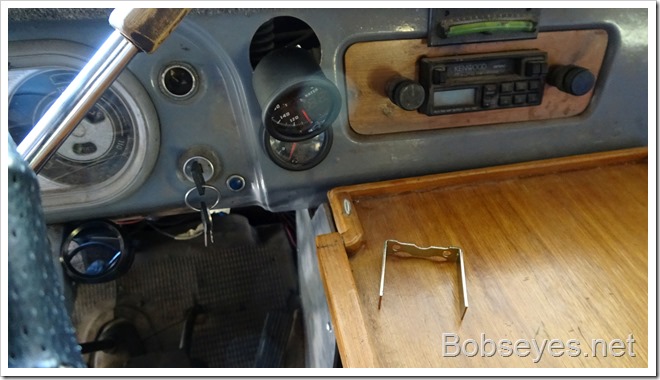 It’s hard to get ones hand under the dash to put the small nuts on the bracket but I kept at the job of getting those little nuts started dropping them more than once and got it done. 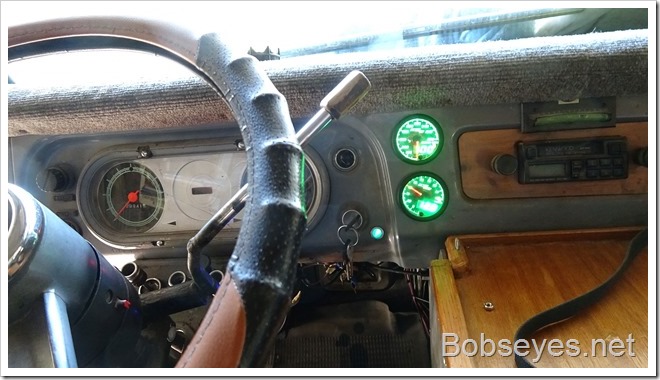 After some more chair hopping I put the car’s funny spare tire back in the car and remembered I’d seen one of the car’s backup lights were out while down at the tire center. 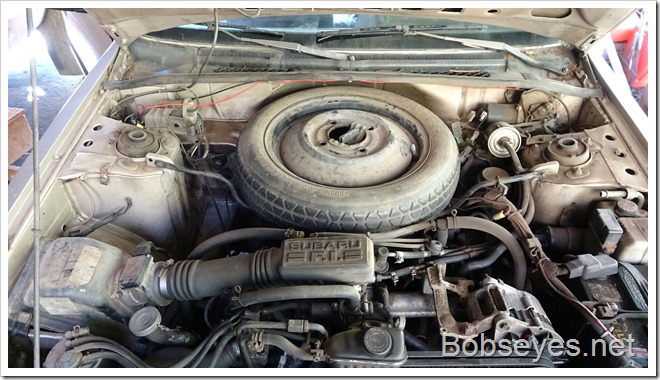 Car’s backup light is out

When I got the old light out I found it had burned out so now had to look through all my stuff to find a replacement. 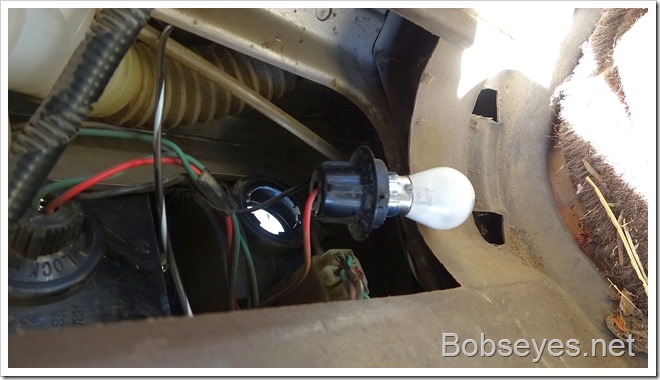 Looking for a new bulb

I found a  new extra one in my van but it didn’t work as it’s filament was broken likely from hitting too many bumps with the van. I looked all over and finally gave up as I’ll need to get a new one at the store but that will keep until I get around to it as it’s only a backup light.

Before the day was out I hauled a few loads of mulch to the blueberry garden, since we’d gotten more mulch. I think a few more loads of mulch in there would be good. 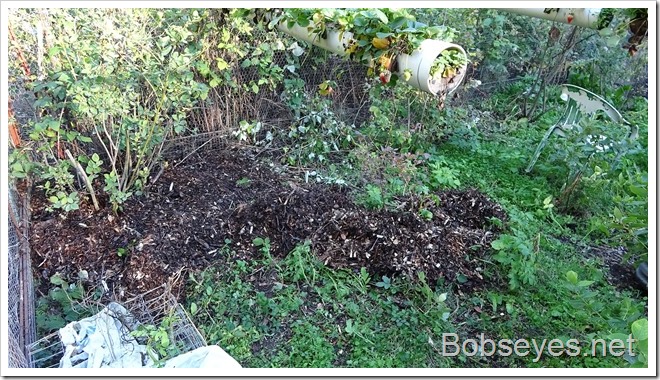 I got quite a few little things done and mostly took it easy today.