A day on the Russian River kayaking

John contacted me yesterday to see if I wanted to kayak down the river from Monte Rio to Jenner. I said yes of course. I met him and Ray at the Monte Rio parking lot where we put our boats by the ramp and I drove on down to Jenner where we left John’s truck so we could get back to Monte Rio later then I drove him back to Monte Rio where Ray was watching our boats.

Just after a flood last week

The river water was high and muddy and about 15 feet or so higher than summer water levels from all the recent rains. Guerneville had a flood about a week ago so no telling what might have floated down the river during that time.

Here we are putting in at the Monte Rio boat ramp around 11 AM this morning to a sorta sunny day. Sorta as we got rained on later. 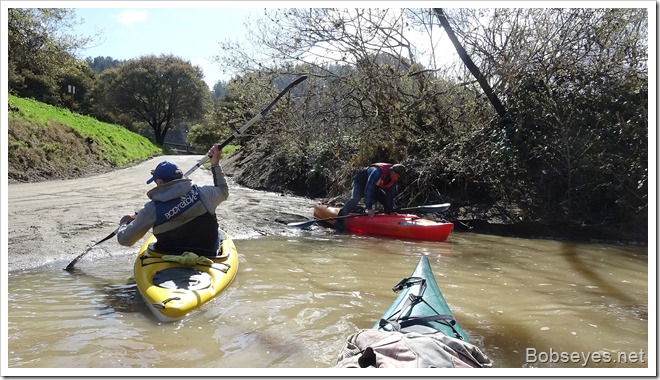 Here we are just after putting into the river and starting our drift down the river. 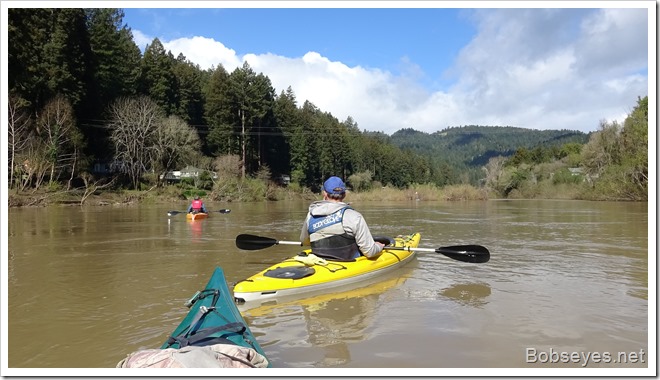 Oh oh rain up ahead

Just up ahead we ran into a good rain shower that was getting us all wet as none of us put on rain pants as it wasn’t supposed to rain today. 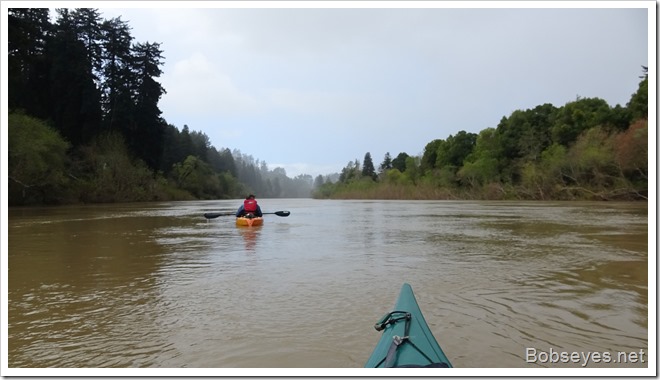 The rain came down hard so we did the best we could to pull under a tree on the river’s edge but we got pretty wet as it lasted longer than we thought it would. But we’d dry out.

After the rain shower stopped we continued on down the river going by here just below Moscow hole and just above Casini’s RV campground up ahead. 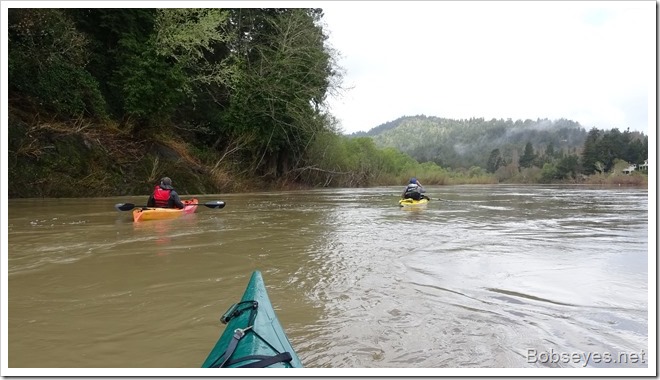 We are drifting along just below Duncan’s Mills bridge. 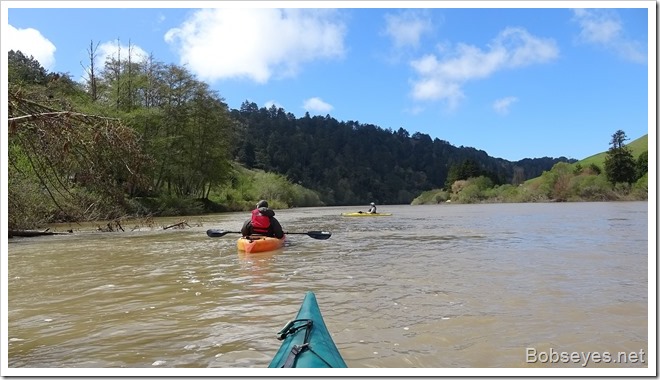 We went by these goats up on the hillside. Plenty of grass to eat up there so they were taking it easy. 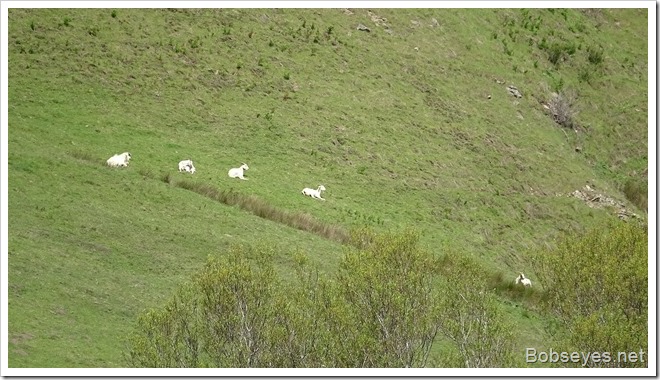 The osprey are starting to nest for the year. 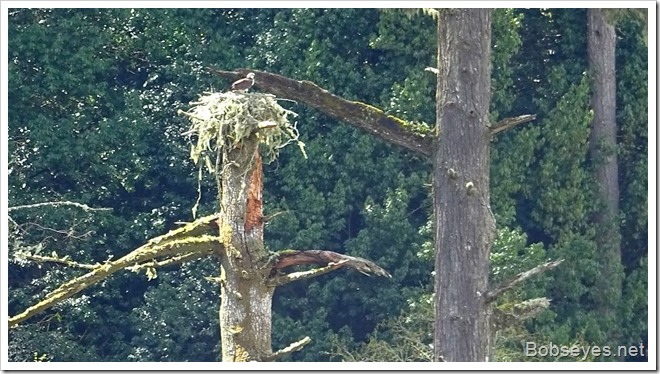 Just to the right of the osprey nest is this great blue heron rookery. I’m sure there are lots of birds up there sitting on eggs but I couldn’t see any. There’s more than ten nests up in that tree. You can see the clumps that are nests. 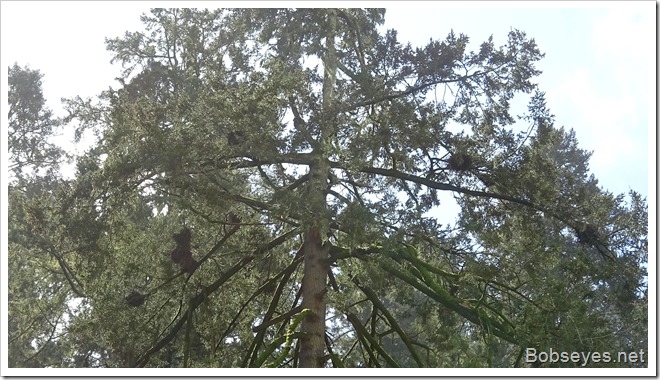 We were surprised to see this turtle out down this way. 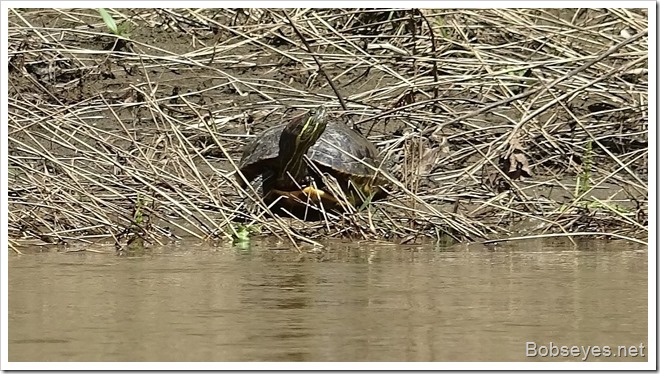 As we were pulling into shore for a lunch break we passed by this great blue heron who gave us a squawk. 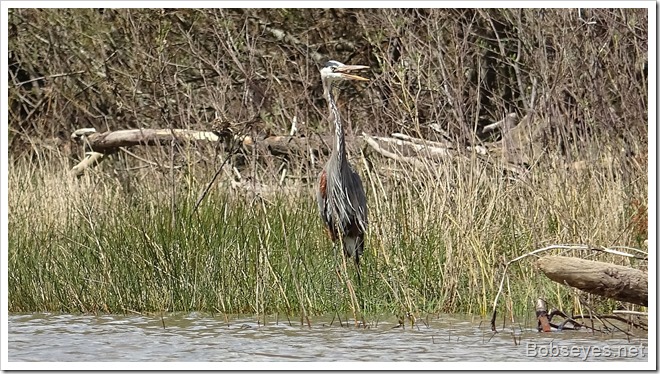 We pulled into this spot for our lunch break. 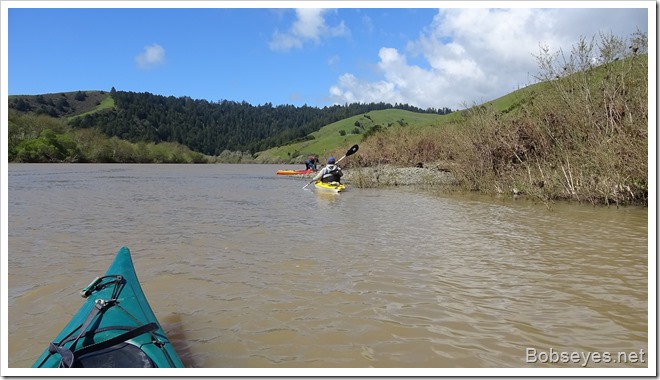 After about a half hour lunch we put our boats back in the water and went by these two geese feeding along the shoreline. 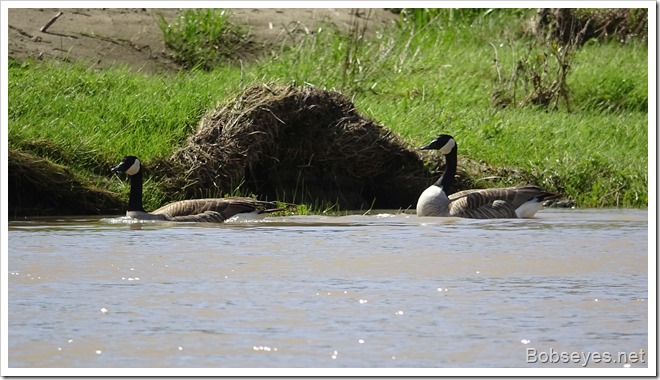 And across the river these cormorants were resting with the seagull. The water’s a bit muddy for fishing right now. 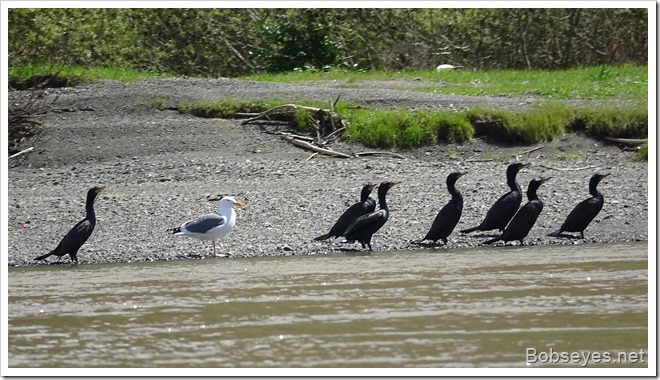 Just below Markham hole I spotted this dock that got away from someone up stream during the recent flood. It’s upside down so it’s going to be  hard for someone to turn it back over without a crane. John decided to push it out in the river and start it down the river. He had to work at it but finally got it in the current and away it went. 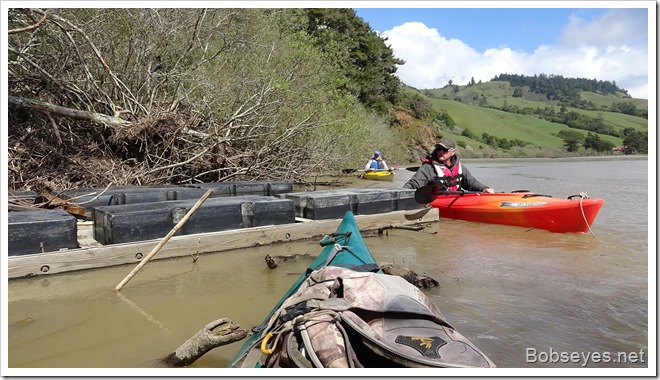 Once the dock was in the river’s current we were wondering how we’d stop it in the fast current.

This grebe paddled by us along the shoreline. 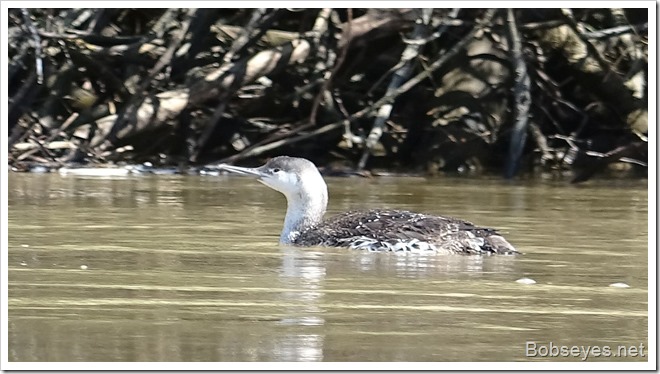 Docked the dock at Bridge Haven

As the dock went under the bridge at Bridge Haven it got into an eddy so we were able to stop it there just below the bridge and John tied it to a log there and we left it there for someone else to deal with. At least this should keep it from going out into the ocean. 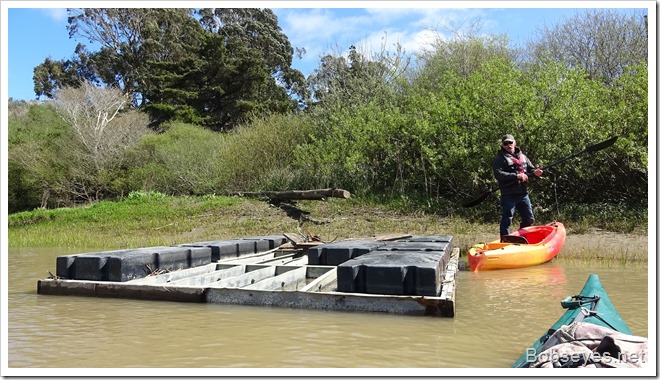 We continued on were we passed by these birds, mostly turkey vultures. One of them is eating a big fish, the one by the seagull. 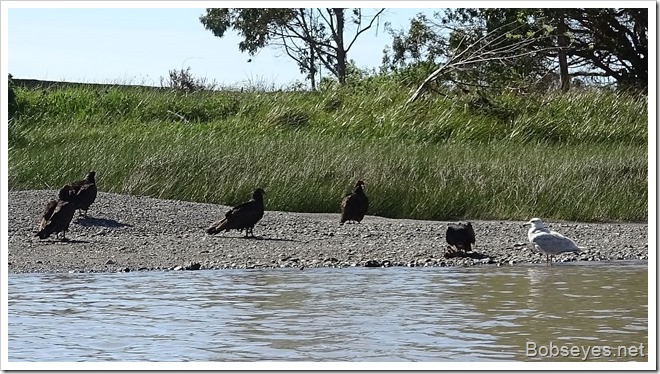 John and Ray made it to the Jenner Boat ramp first where we pulled our boats out of the water around 4 PM. 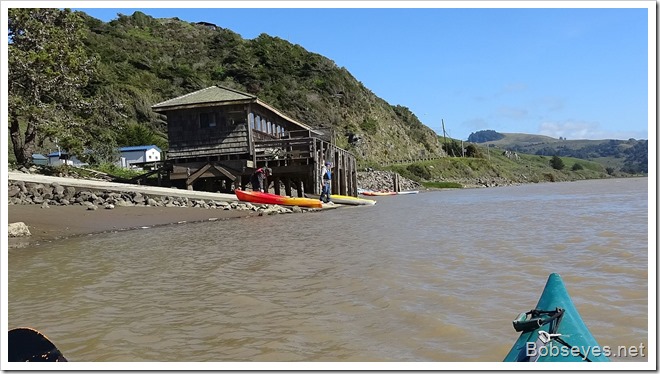 I needed a nap when I got home, a good long one and that was pretty much my day for a good one.

Nice day on the river even with the bit of rain we had.