I was going to do some more work around the yard today, but with more rain coming in this week, I thought I might spend my time better by going kayaking while I could.

I headed off for Jenner but stopped in Monte Rio on the way to check out the boat ramp as the last time I saw it it was full of fresh mud.

They cleaned up the boat ramp mud

But today, no mud, the guys from Monte Rio had cleaned up the ramp the other day. I started to head for Jenner but decided as long I was here why drive down there, just put in here, so I did.

Here’s what the boat ramp looked like cleaned up as much as possible. 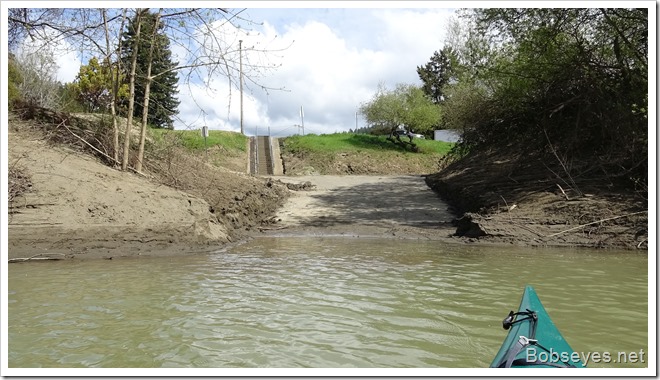 Headed on down the river

I headed down river drifting in the current, moving along slowly. The water is still a bit muddy from the winter rains, so no fishermen were fishing for steelhead in the slot, just below me. 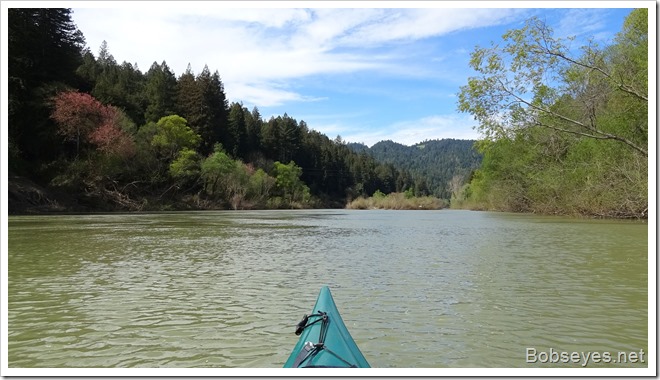 A couple ducks swam up to check me out. 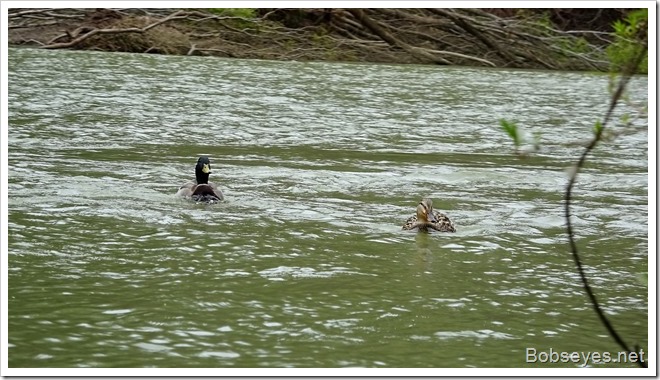 Some guy in the bushes

I saw this guy over in the trees that I thought might be fishing. It turned out to be Andrew who fishes down here and lives at Villa Grande. 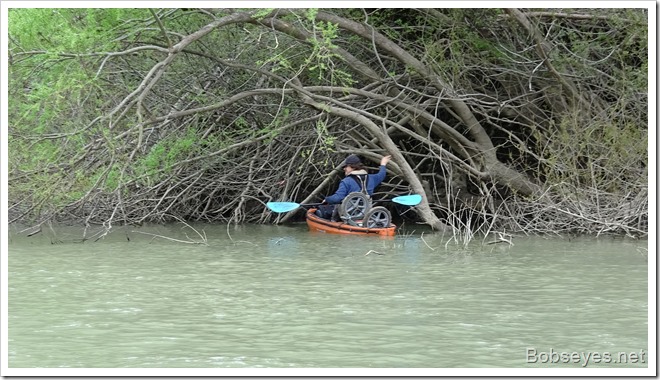 I joined him as we drifted down the river towards Villa Grande.

I wouldn’t want to own this house

We went by this pyramid house that didn’t fair well last winter. Not only did the river undercut it, but a big tree also fell on it. 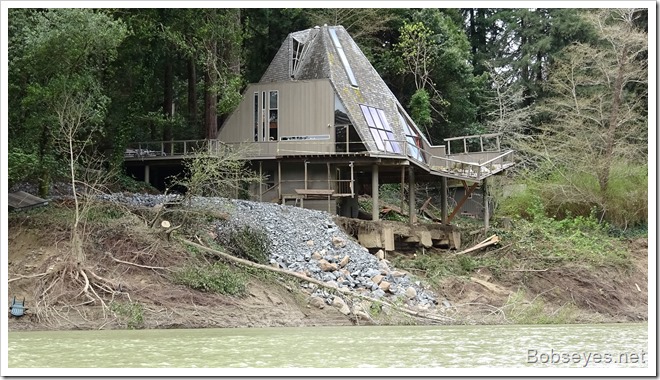 We continued down river shooting the bull until we got to this spot at the Villa Grande Hole where Andrew pulled his boat ashore on the gravel to leave for the day. 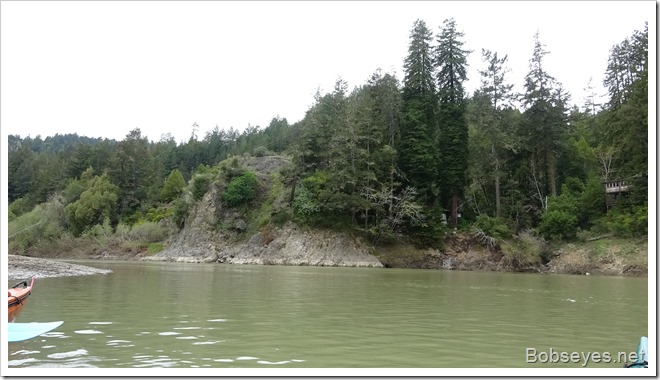 But as Andrew landed we saw this big fish near the shore by us so we had a look. 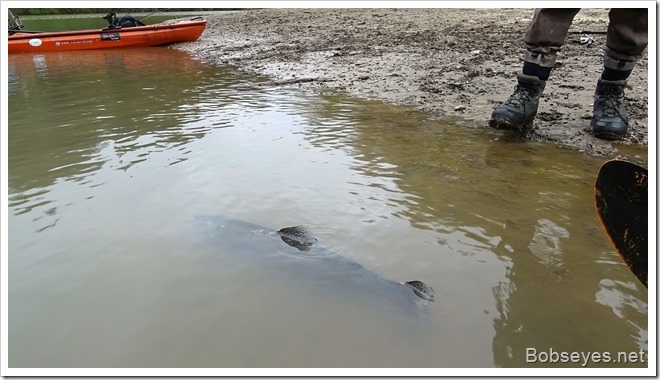 It looks like a steelhead going back to the ocean all beat up. I used to think these beat up fish had some kind of disease and that’s also what I’ve heard. But over the years I’ve changed my mind on that one. 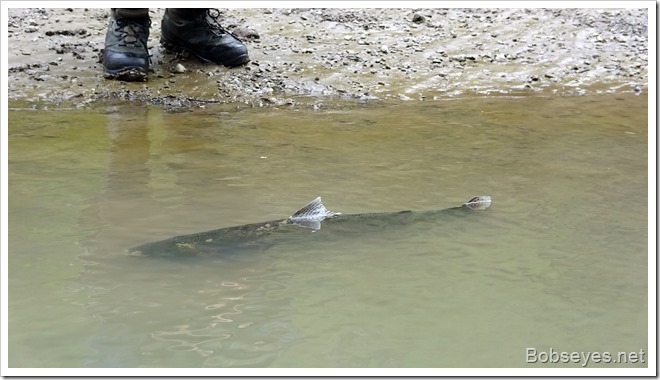 I think they are just old steelhead

When Salmon spawn, they die rather soon where they spawn, but when steelhead spawn, they don’t die, but return to the ocean. So now, what I think these beat up go backs are, are old steelhead which made it up to spawn for the last time and are spent and now are dying of older age. At least that’s my theory.

Sitting around the Villa Grande hole

Andrew went up the hill to home and I paddled across the Villa Grande hole to this spot and sat around and enjoyed the day. 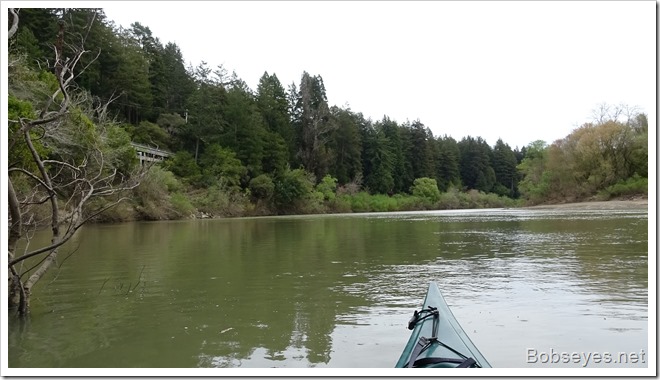 This is looking across the Villa Grande hole to the shore where Andrew and I were checking out the spent steelhead fish. 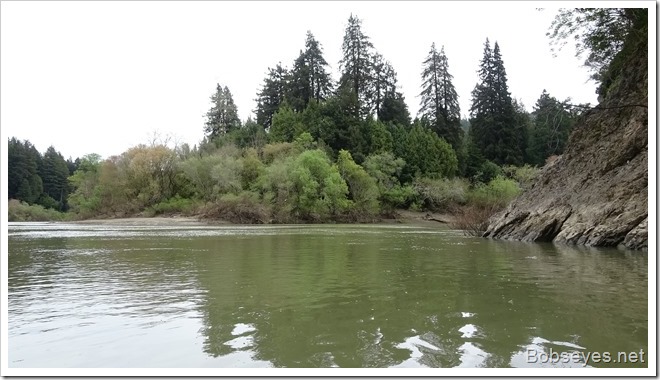 Paddling back up the river

Eventually I started back up stream paddling along the river’s edge to avoid the faster current out in the middle.

This is a nesting pair 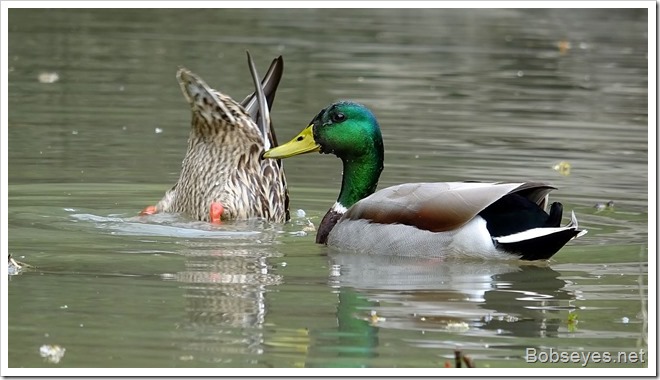 I continued my paddle back up the river. I’m just below Monte Rio headed up river here. 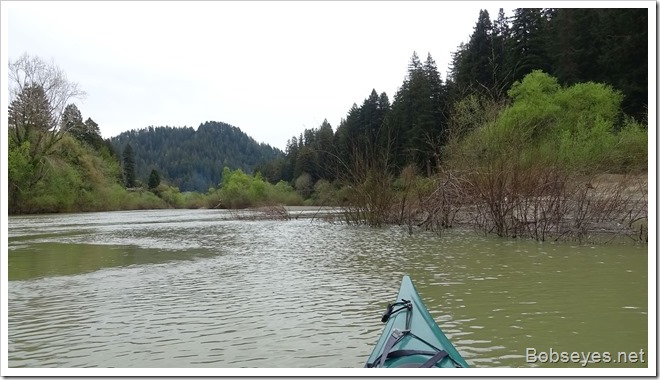 I saw this turkey vulture getting a drink of water on the shoreline as I paddle on past it. 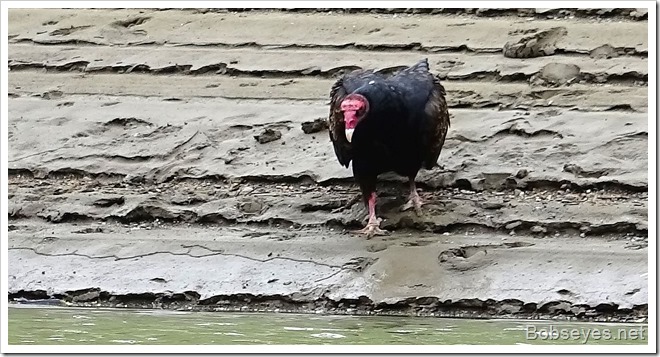 Waiting for the boat ramp to clear

I made it back up to Monte Rio and was sitting under some trees waiting for some kayakers to clear the boat ramp when this crow flew in over my head and eyed me on the water just below it. 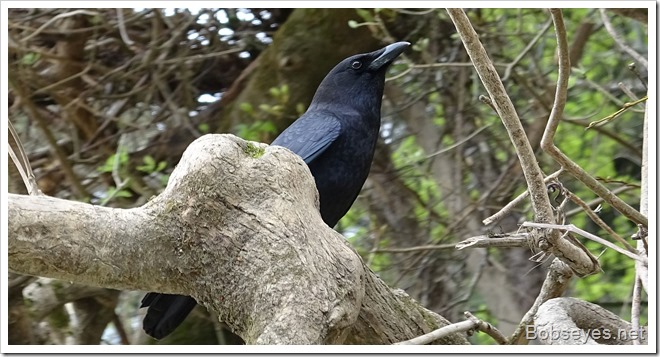 Once the boat ramp was clear, I paddled on over and took my boat out of the water and went on home.

Once home I had a nap and then went out in the yard and sat around until it got dark and that was my day.

1 Response to Monte Rio Boat Ramp De-mudded, a Paddle and an Old Steelhead