Missing Peep’s Mystery Solved and It Wasn’t the Fox

Nope, it wasn’t the fox

First thing I did this morning when I got it going was to look through last nights recorded photos to see if I could see the fox looking for chicks this morning. I locked the chicks up this morning so they weren’t out nor were the chickens as they were also locked up until I found out what was eating the chicks.

Well, it wasn’t the fox that was eating the chicks. A few days ago I noticed a hawk fly over but it keep going and flew off but it was about that time the chicks started to disappear.

That hawk landed on my chicken roof this morning looking for peeps.

Here’s the photo the camera caught first thing this morning. See the hawk on the upper left? 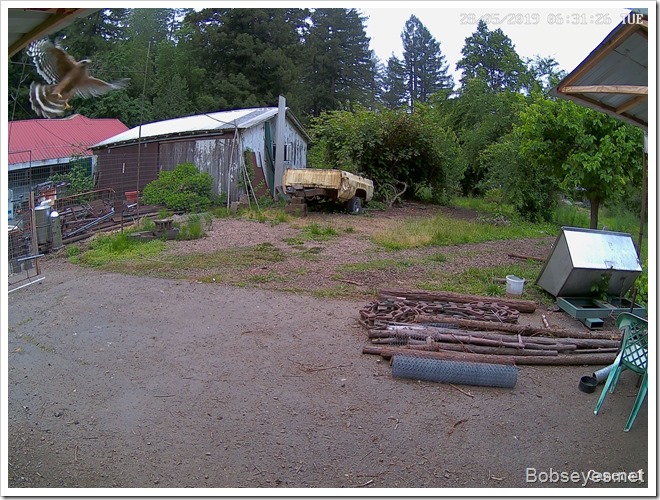 No more easy meals today for the hawk.

Once I got it going I let the big chickens out to graze but kept the little peeps locked up for now. I had some work to do to give them some more freedom.

I continued to cut chicken wire to put around the bottom of my pen fences to keep the little chicks from getting out. I used the hog nose clips to fasten it to the fence bottom.

Cutting up the chicken wire. 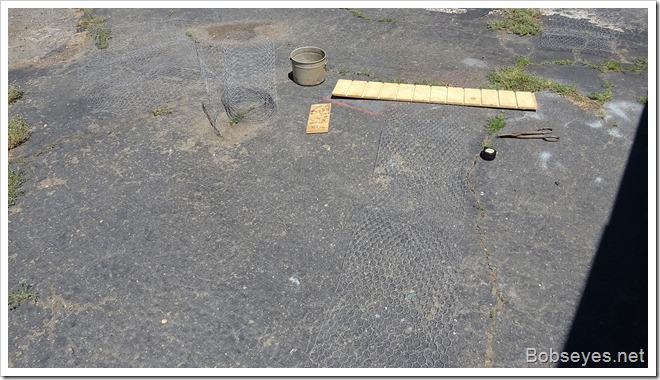 That took quite some time but I finally got it done with a couple breaks in there too.

I like to let the peeps and older chickens get together, but the peeps need to stay in while the larger chickens need to be able to get out to graze.

I’d like them to be able to intermix so I thought some hop gates might work out to keep the little guys in but let the bigger guys out by hopping over the gate. I welded some rebar together to make the hop gates and cut more chicken wire for the two hop gates I made then I cut some wood for the top step for the chickens to hop onto and over. I put some wire hooks up to hold the hop gates up so they are easy to put up or take down. The other gates will still close with the hop gates up.

Here’s the first hop gate. It didn’t  take that bird long to try it out, worked good. 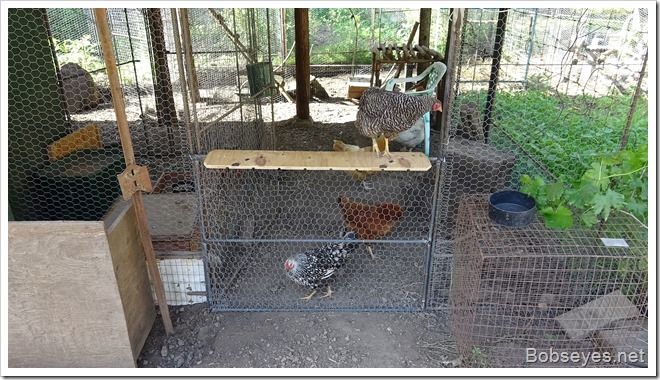 And here’s the second hop gate I made that separates my two main chicken pens. 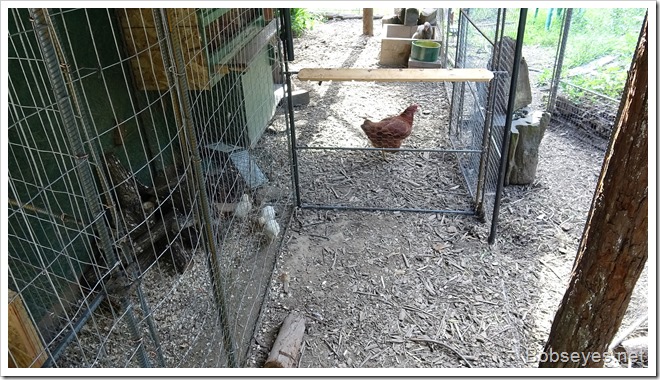 I also made two of these little peep doors so the peeps can get through them but not the larger chickens. Carmelo the rooster and Rosy is checking one of the peep doors out. I put a small board on a screw I can close to lock the door on them. 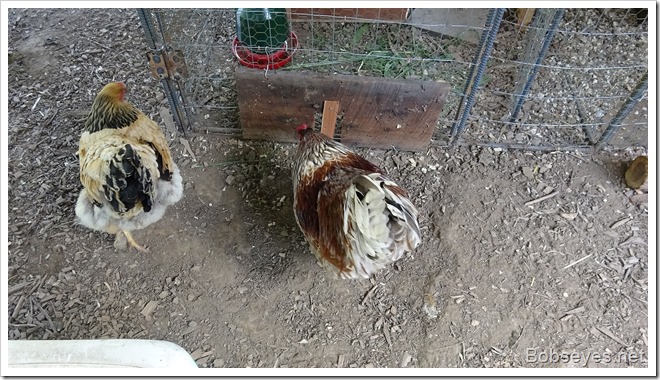 Tiny door to the grow pen

I decided to let the little peeps into this grow pen to graze as they are small enough not to destroy it. I was going to let the big birds in there but it will last much longer if I keep the larger birds out. 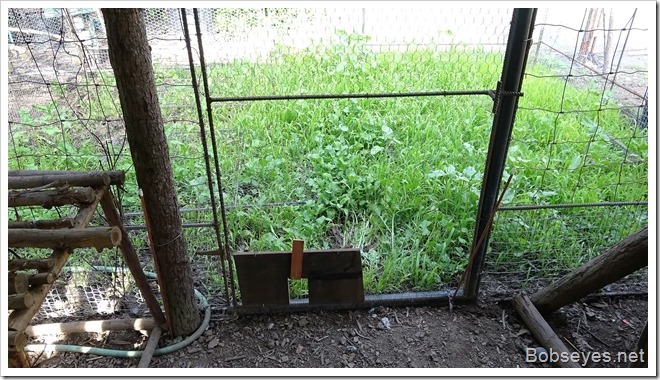 Letting the peeps out into the pen

The little peeps where glad to get out of lock down and out into this larger pen. 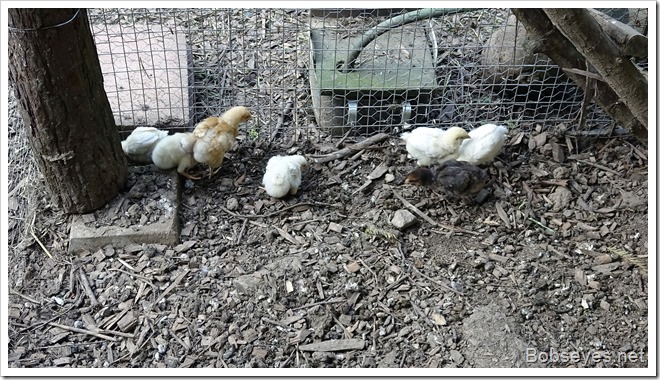 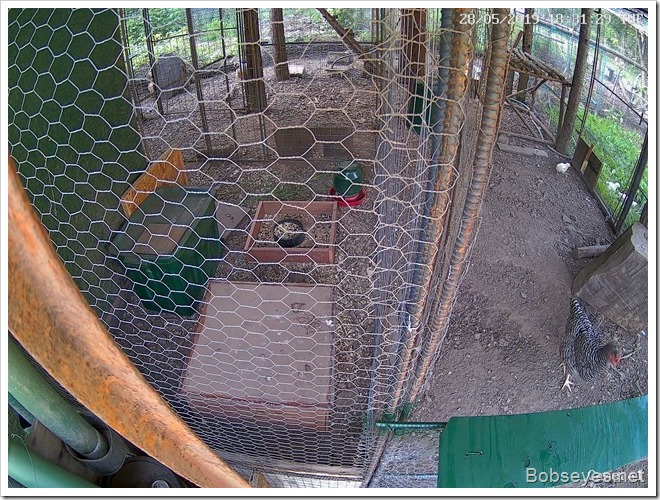 You can also see I just painted the hop step green.

Good place for the peeps

The little peeps were really enjoying the grow pen. 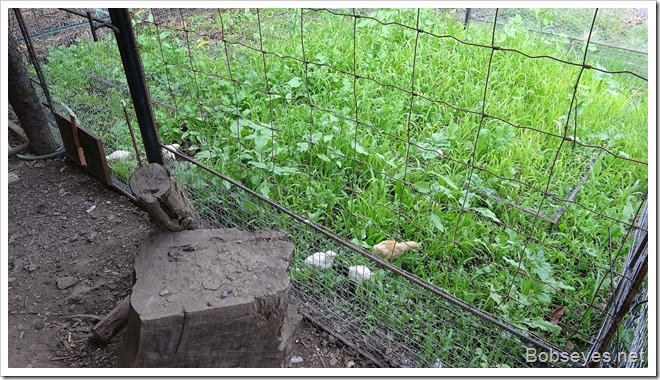 Another chicken checking out the hop step gate. 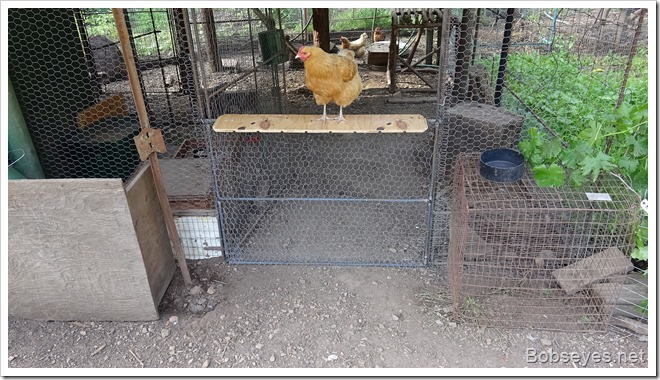 They’ll have to learn to use them

Even though some chickens used the hop step gate earlier, when they came in to roost none of them hopped up and over the gate. I had to let them in to roost, but tomorrow morning when they open the automatic gate they will  have to hop up there to get out to graze early in the morning.

I think they will figure it out.

Worked hard for the peeps

I worked harder than I wanted to getting things ready so the little peeps can have it good and not be totally locked up, so in the evening I was beat and mostly chair hopped and took it easy for the rest of the day.