Marty comes by for a visit

I was sitting around this morning taking it easy figuring out what to do today when Marty showed up for a visit. 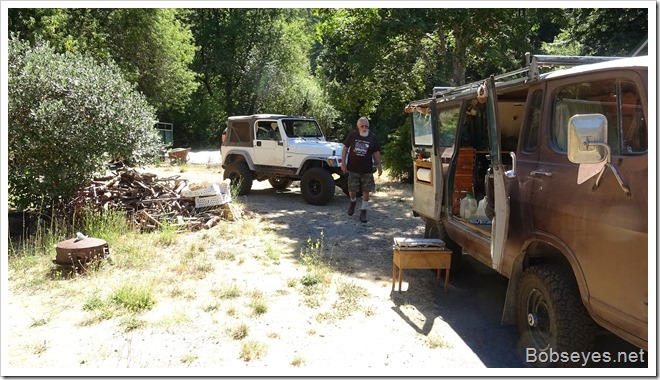 We sat around in the yard for a few hours shooting the bull, chair hopping.

Let the chicks out

We checked out my new chicks. I opened the door from the coop to the pen so they could go out and see the world for the first time. It took some time before they ventured out.

Here are the new peeps venturing out for the first time. 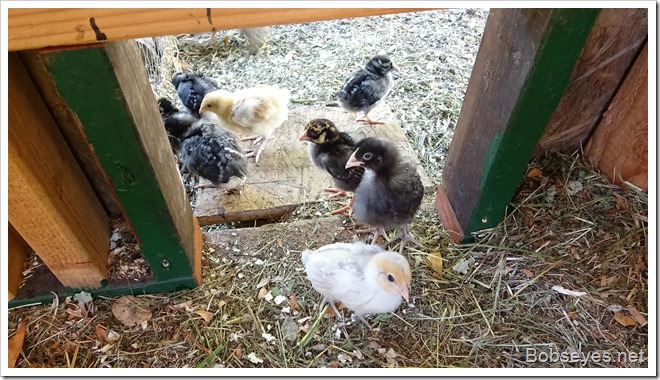 Eventually they made it out a little further into the pen. 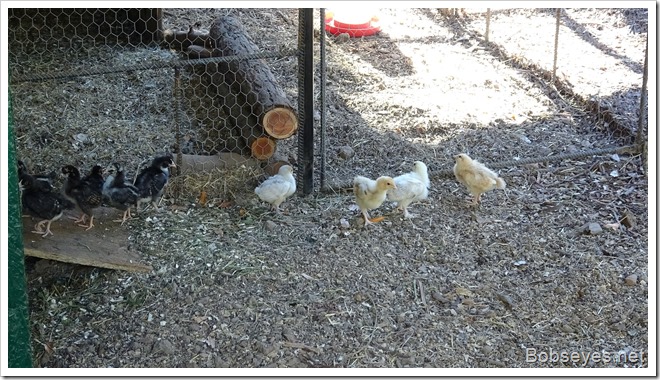 We sat in the main chicken pen and watched the chickens antics. 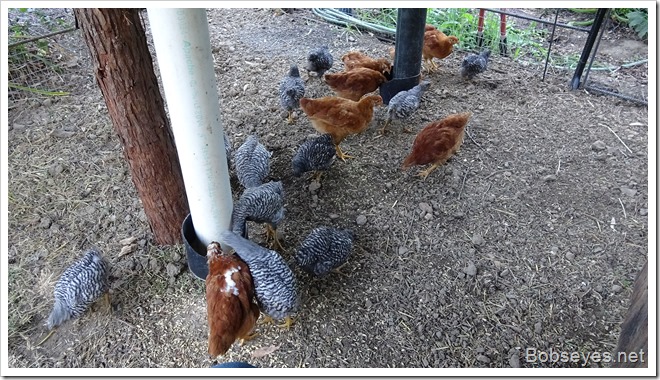 We watched the peeps a bit more too. 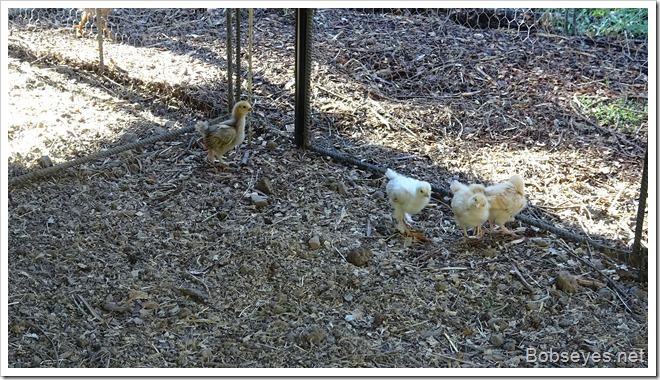 We walked around the yard sampling plums, prunes, blueberries, strawberries and some big black mulberries too.

We also went for a short walk over to my brother’s garden and back just for a bit of exercise.

This is an interesting chick. It’s supposed to lay blue eggs. 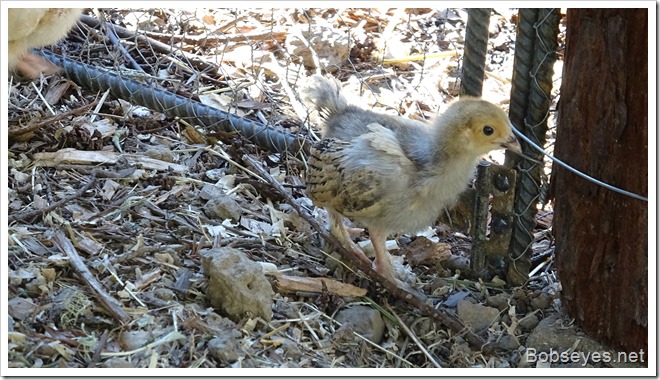 Marty left and went on home so I went in for a nap and decided this would be a good do nothing day so I mostly sat around the yard, especially in the chicken pen watching the chickens. I decided I’d try to pick some of them up today just to see what happens.

I’d catch them with their head in the feeder and pick them up. They squawked a lot and scared the other chickens, but once I tucked it in to me it quieted down as I petted it’s head. I then would put it on the ground but not let go and they would just stay still. Then I would let it go and see what it did. Surprisingly when I let some of them go they seemed to not be as scared of me as before, although some of them ran off, but most stayed close by. I noticed the other chickens were getting scared of me from the ruckus the chicks were making when I first caught them so I only did a few for now.

One of them I did twice and the second time there wasn’t any struggle.

Just before dark I decided to have a look at my van’s shifter on the steering column as it popped out a bit on the last trip. To be safe on the trip I put this clamp on it to hold it together. I didn’t want to mess with it out on the road because if something really went wrong I might not be able to shift which wouldn’t be good.

The clamp is holding that plastic cover in place which is keeping the shift rod in place. 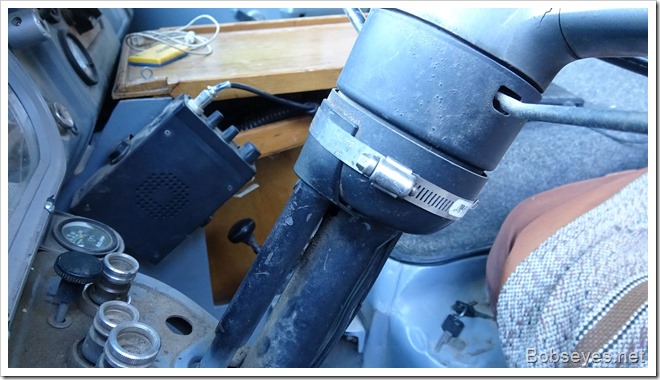 It got so loose while I was driving that it broke off the four way safety flasher button so I’ll have to fix that somehow too. 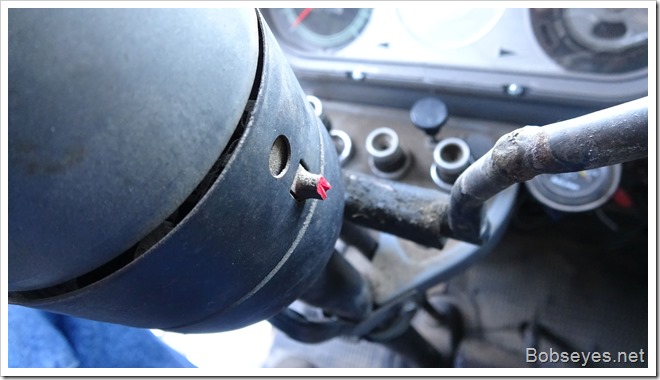 I took the cover off and put a mirror up to see if there was anything I could see in there. Not much. I worked the shifter back and forth and I could see that something wasn’t holding the shifter in as it should. 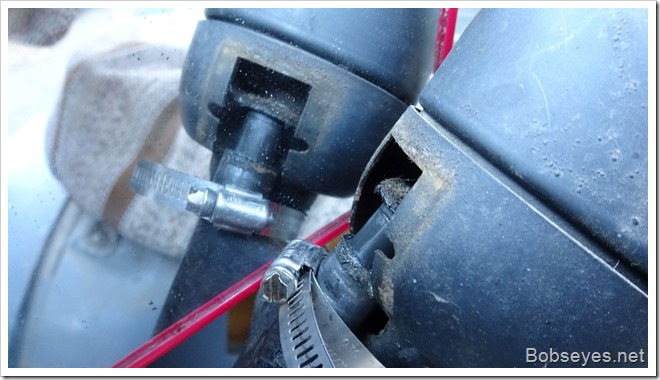 I did a lot of searching on the internet looking for a diagram of this unit and parts, but I couldn’t find a diagram of it and it appears parts are hard to come by. That meant if I take the steering stuff off and find a bad part I will have to fix it and make something to work.

After working the lever back and  forth and looking at the action of the thing I decided to try a clamp on it to hold it in. The shifter pipe has to turn under the clamp so it had to be adjusted so it was just loose enough.

Here’s the clamp holding the shifter pipe in. 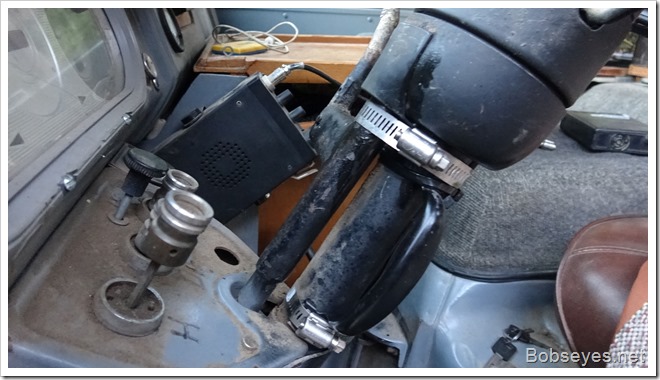 I wasn’t sure that would work, but interesting enough it never has worked better. I think maybe the shifter has been messed up for a long time before this as now the shifter was nice and tight and shifted nice and solid instead of wobbling around.

So I decided this repair will work for now. Once it get’s tested out I’ll know for sure, but it looks real good for now.

I checked the new chicks to  make sure they were in the coop for the night and shut the doors to keep them safe.

And that was it for a lazy day.