Marty was out early this morning trying to catch some fish. He wasn’t having much luck and realized he left a lot of his fishing tackle at home. 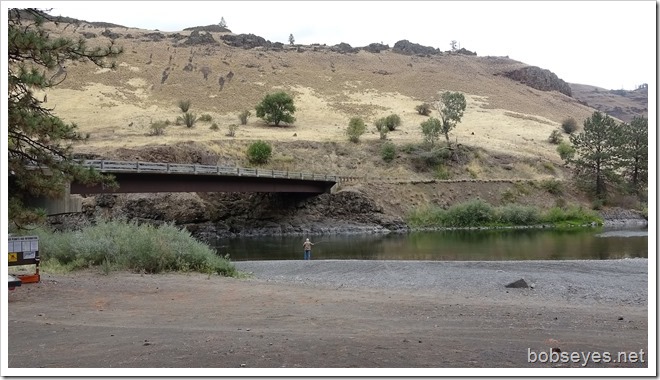 Marty fishing away at our camp site on the Grande Ronde River. 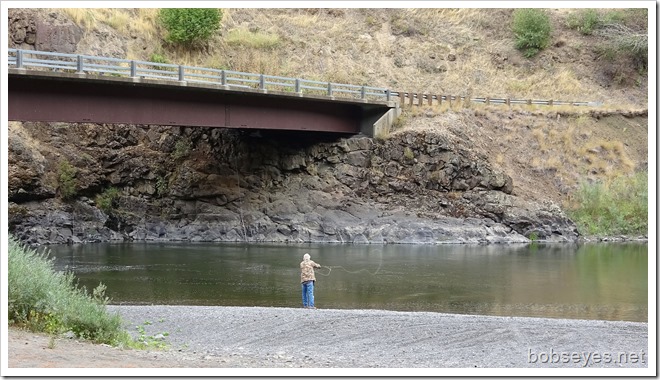 After breakfast and some chair sitting we drove down the road a bit to try this spot. We were headed to Troy to use the internet. 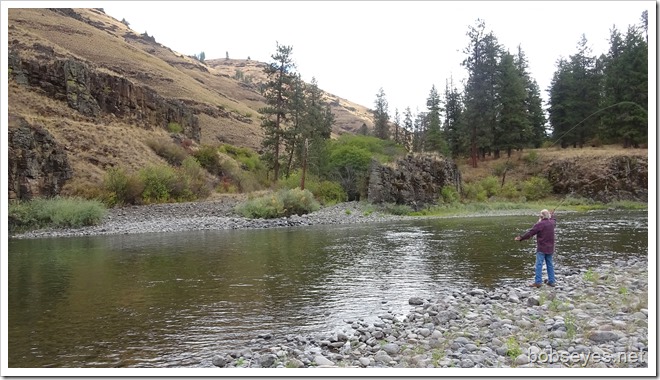 He didn’t have much luck and almost broke his neck walking across the rocks, so we returned to the vans for a break before trying again up river about a 100 feet. 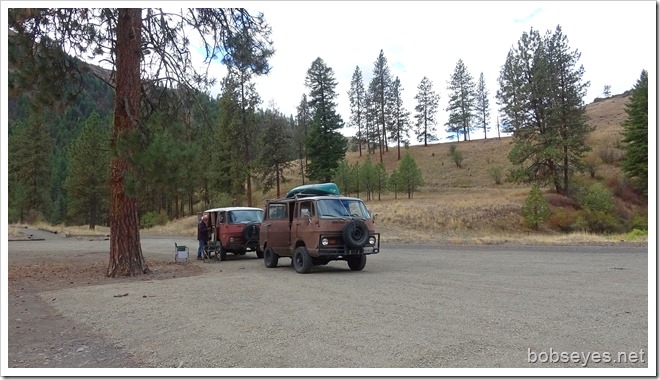 After a good break Marty tried this spot with no luck.  He found his walking stick and did better on the rocks but we are going to have to avoid this kind of stuff because of age so we’ll have to find easier places to fish. 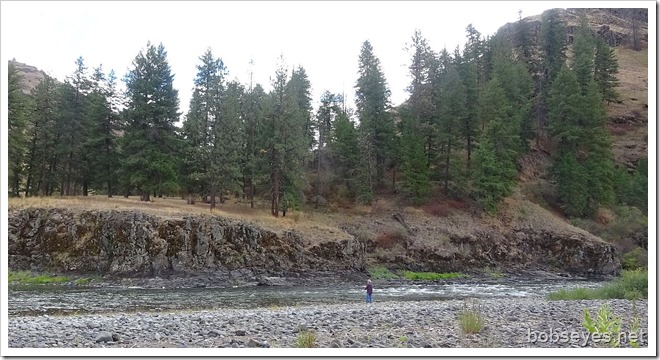 I was telling him there are lots of fish in this river and he said I was lying. :O)

Elk on the river

We headed on down river towards Troy along this road, when I saw the elk down there getting a drink of water. 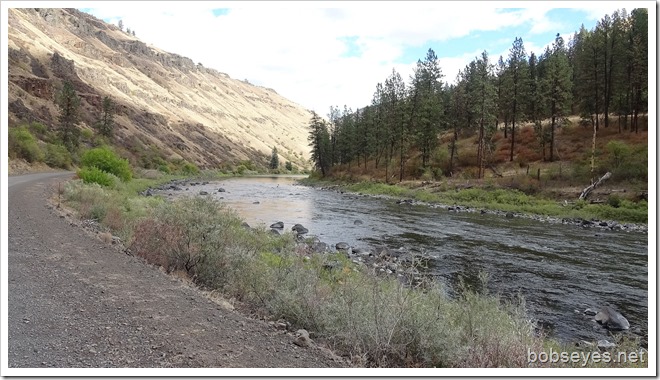 For you guys with bad eyes, here’s a closer shot of the elk as they moved up the hill a bit because of our presence. 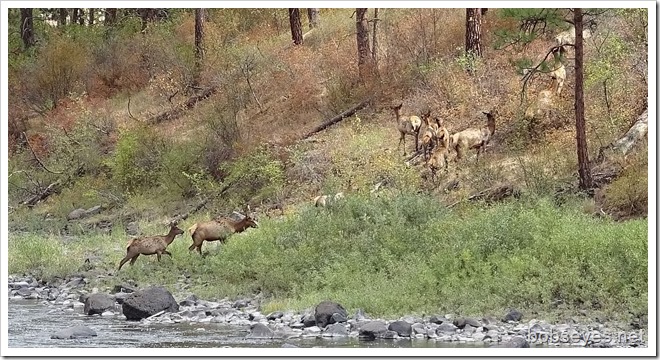 We made it to Troy and pulled into the Wenaha Bar and Café at their bath house to use the internet. This was our view from there as a logging truck roared on by. We were going to head up on that grassy hill later that they call Eden Bench and stay the night and do some exploring. 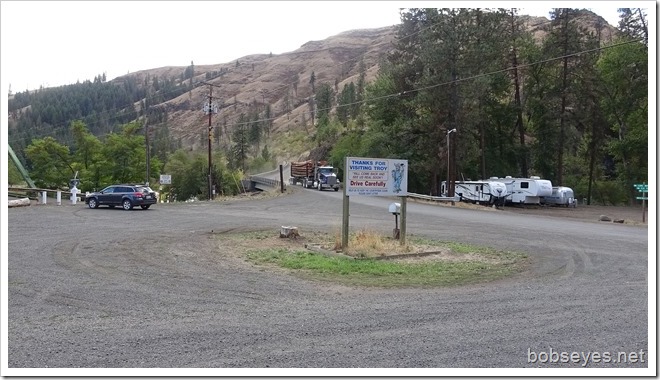 Jodi shows him the fish

Just as we pulled in a lady named Jodi came out of the bath house and noted our vans so we shot the bull with her for a bit. She had some pictures of the recent fish caught on her so I was able to prove to Marty there were fish  in the river. Thanks Jodi, We shot the bull for quite a spell before she returned to her fifth wheel. She said her and her husband have been spending the last five winters here.

Marty and I both thought she was  a neat lady and enjoyed talking with her.

I was having some problems posting my blog so we decided to go across the bridge and try the schools internet which I hoped was still working as I used to use it in years past.

It was pretty slow too. Eventually a lady came out which turned out to be the teacher’s wife and we shot the bull with her. I used to come up here all the time each year and help the old school teacher Ted Zeller and his wife Sue with honey do’s and in return they gave us a place to stay and they fed us well as Sue was an excellent cook. We cut their fire wood and built stuff and repaired stuff each morning and had lunch and went hunting or fishing or exploring in the  afternoons and evening.

We also hunted and fished with Sue and would take her out in their four wheel truck. Because I knew them I eventually met most of the local farmers and ranchers in this area, which have mostly passed on by now. Another nice lady.

Headed up to Eden Bench to camp and explore

It was time to show Marty Eden Bench which was up on the hill top above the river.

I said I’d stop at a rock quarry to take a break and check out the view on the way up.

Break at the rock quarry

We stopped here and put our chairs out for the view. 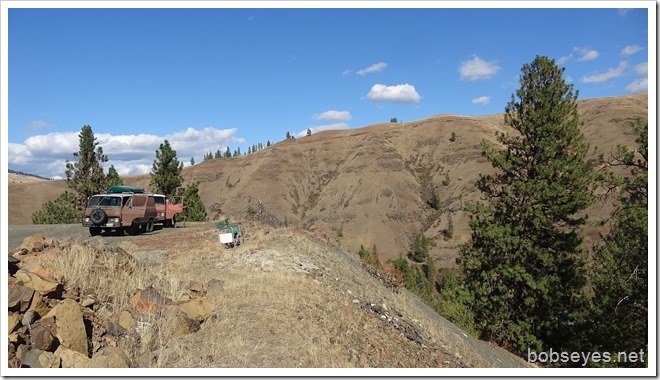 Our view of the Grande Ronde River from that spot. 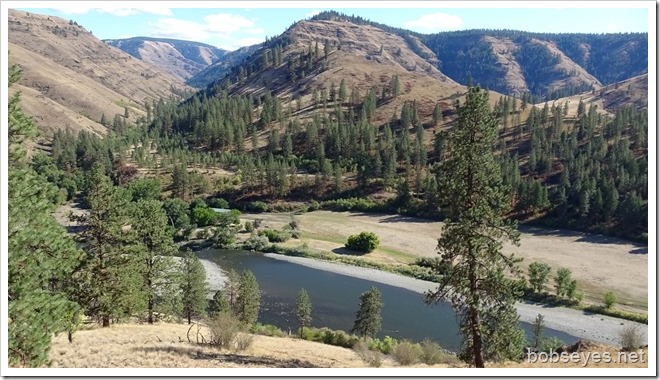 We continued on up the hill to Eden Bench to check out where Sue Zeller lived until she passed away a couple mouths ago. I assured Marty it was alright for us to camp here but he didn’t like camping in someone’s yard so we didn’t. They have a fantastic view from their deck. 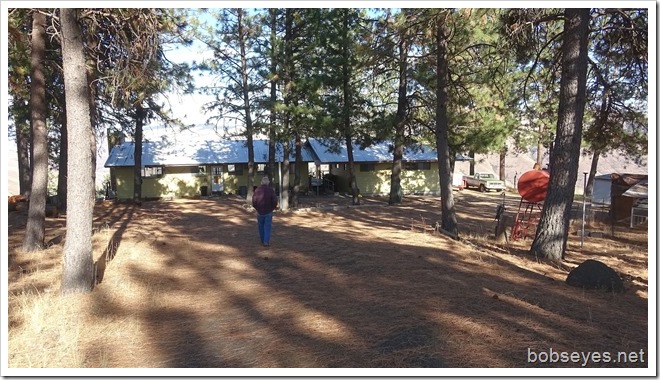 I talked Marty into camping outside their gate here as I didn’t expect anyone to come by and it was ok it they did. 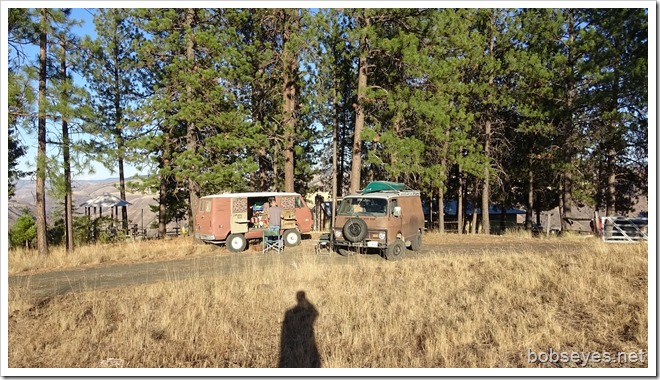 Evening ride on the Eden Bench

We took a break and ate dinner and headed out for an evening ride around six.

We drove by several herds of deer and I didn’t get any pictures but decided I’d get some on the way back but they were gone by then and it had gotten dark.

But we did see some elk feeding down below the road and stopped and got out to take some pics when a truck with an older  man and a woman drove up behind the parked in the road van. 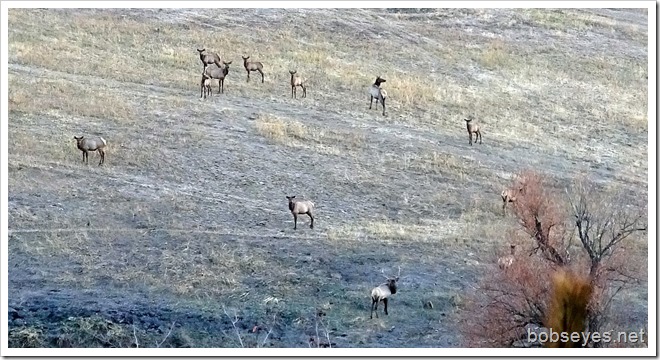 I went back to talk with them and apologize for blocking the road. They were both smiling and said to take all the time we needed. I found out they lived real far out the road we were on and live by Irv H. Very nice people. We drove a bit more until we could let them by and continued with our exploration going by this pond area down below the road. 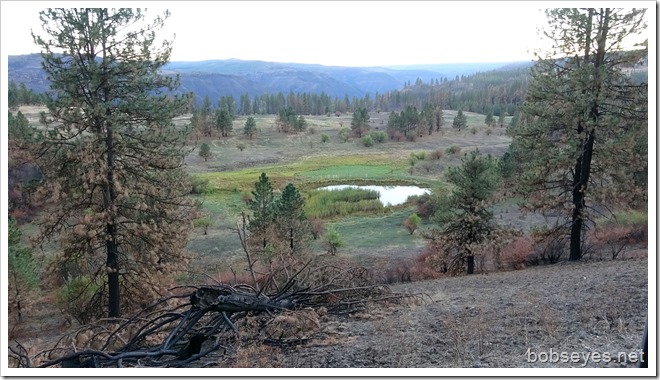 We drove out as far as Irv’s place and turned around to head on back.

Another truck pulls up behind us

We stopped to check out the elk we saw earlier when a truck pulled up behind us. So I went over to say sorry and had a good chat with the guy who has a place down in Troy and was also out for a ride. Take your time he says. Every one is just so nice in this area.

Camped for the night

By now it was getting dark so we headed on back to our camp spot at Eden.

Nice day, we are having a great time.