It was just starting to shower off and on as I got it going today. Once I got it going I went out in the yard to get some stuff together on my van as my friend Marty was coming by shortly so we could talk putting a TBI injection unit in his old van which is similar to  my van , his is a 1968 where as my old van is a 1967.

Just after I got out there my brother Tom who lives next door says there’s a phone guy out by my gate. Good, I’ve been expecting them as I called the other day to fix a buzz I’ve had on my phone line for several months now which they haven’t been able to fix as the noise is intermittent and goes away when they try to fix it.

I met the guy at the gate and let him in. 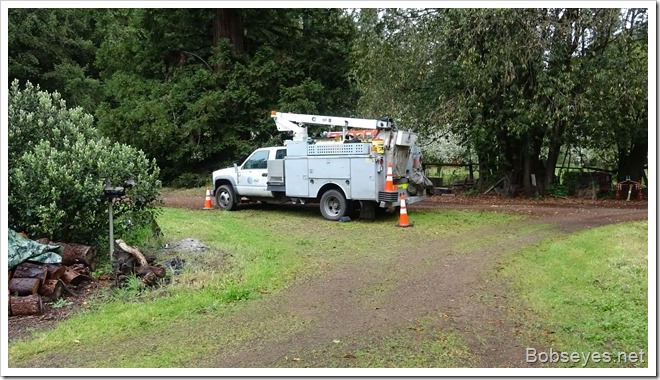 I showed him where the phone comes in the house and he started testing things out when I heard Marty’s van pull into the driveway, so I left him testing away and went to see Marty. 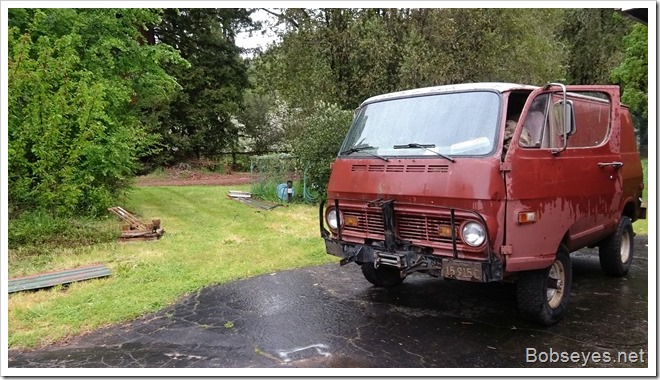 After checking his van’s voltages it looks like that’s the way these old van’s work, so I’ll leave what I  have in my van alone and not be concerned about the lower voltages as everything appears to be working ok otherwise.

This telephone repairman is a good one

The telephone repair guy had been testing things out all this time so I went over to see how he was doing. The noise had cleared up just before he got here. I explained this is an on going problem for several months and no ones been able to clear it up.

Well, he  was one of those guys that likes to fix stuff no one else can solve, so he thought about it while I talked with him some more giving him all the history. He said let me check this box on your incoming line, which is something no one else has done.

Here’s the repair guy testing away. 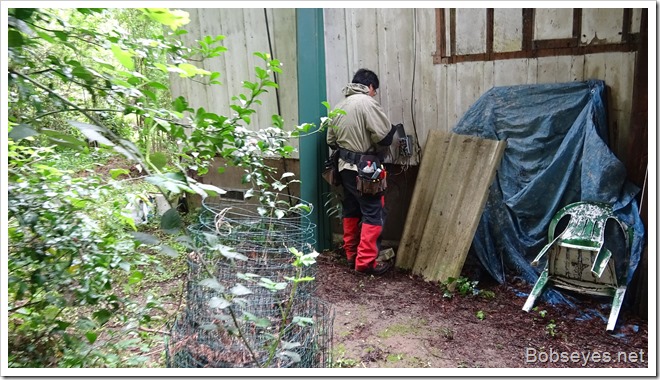 So he went over to check out that box which was in a redwood tree at my brothers place and I sat down with Marty and shot the bull with him for a bit.

He went the extra mile and got it

A little while later the repair guy comes back with a  strange look on his face. Turns out he found two corroded connectors in that box which just might be what’s been causing all the problems.

I thanked him for taking the time and going the extra mile and finding those things and he left. So only time will tell, but I think he may have gotten it.

Back to Marty and the injector kit install

I went back over and sat down with Marty and we shot the bull some more. I was giving him all the TBI install stuff off my old engine so he could use it putting TBI in his van. We hunted up all the parts I had to give him and then I went trough all the steps that need to be done to install the TBI Kit.

By the way, the TBI kit replaces the old carburetor with an injector type carb, called a TBI unit and a computer to control it’s operation, which makes these old van’s more like the newer ones.

We spent several hours going over the different stuff. He took notes and a few pictures.

Here is Marty looking on as I point out what he will need to do to install the unit in his old van. 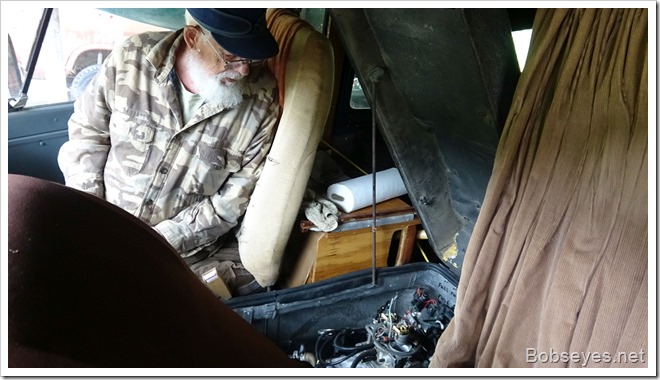 It’s not really that hard to install the TBI unit, but there’s nothing like first hand information.

He left about five PM satisfies that this should be fairly easy to install and said he’d try to order the kit tomorrow.

About that time the showers turned to rain and it got a bit cool out, so I went in the house.

I’d made some bread dough last night so I took it out of the fridge and cut enough dough off to make a loaf of bread. I’m waiting for it to rise now. Yummmmm.