This is the second post today. The first one is below this one if you want to read them in sequence.

We jumped in Marty’s jeep this morning and headed out the road just past the RC plane field headed east.

We had the drone gear with us and planned to do some jeeping and stop to practice flying the drone.

We started out following this road off the main paved road. 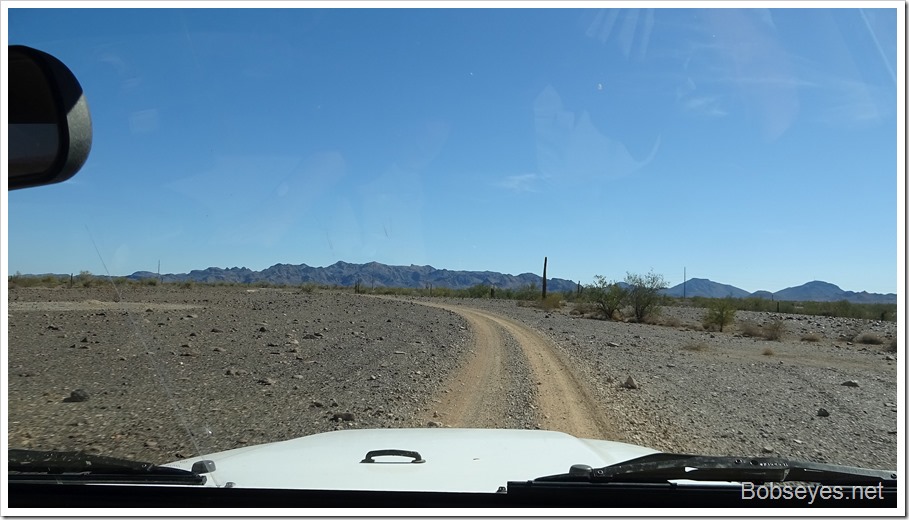 The road got a little rocky in places. We drove out about a half hour or so. 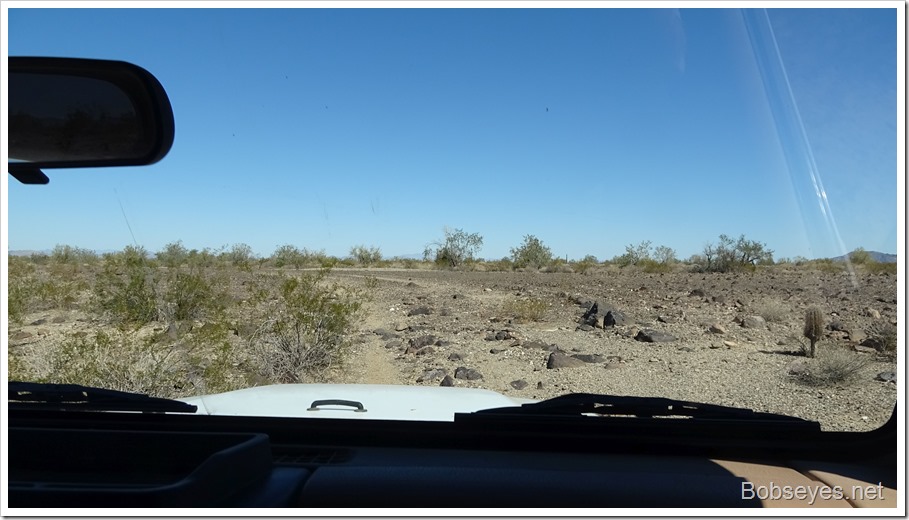 We stopped here and I took the first flight with the drone while  Marty watched as his turn was next. 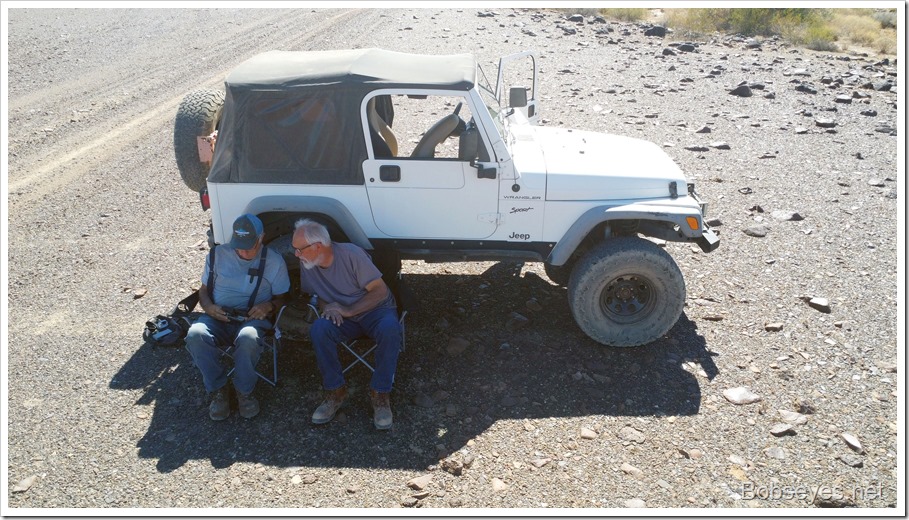 Here we are by the old tank tracks. Those are all the wide ones going this way and that. 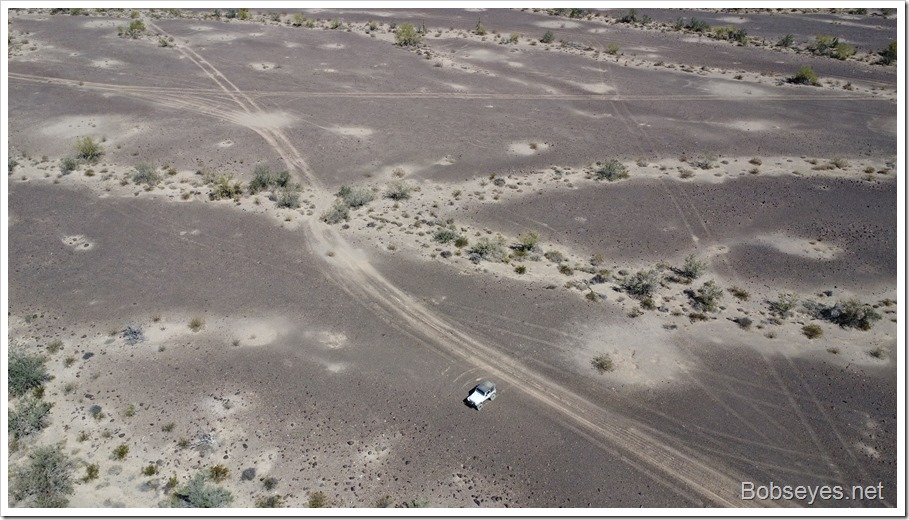 Marty seemed to have an interest in the drone so I let him fly it more than I. We ate two half hour batteries and saved one for later.

Then we loaded up and took off on this road for some more jeeping. 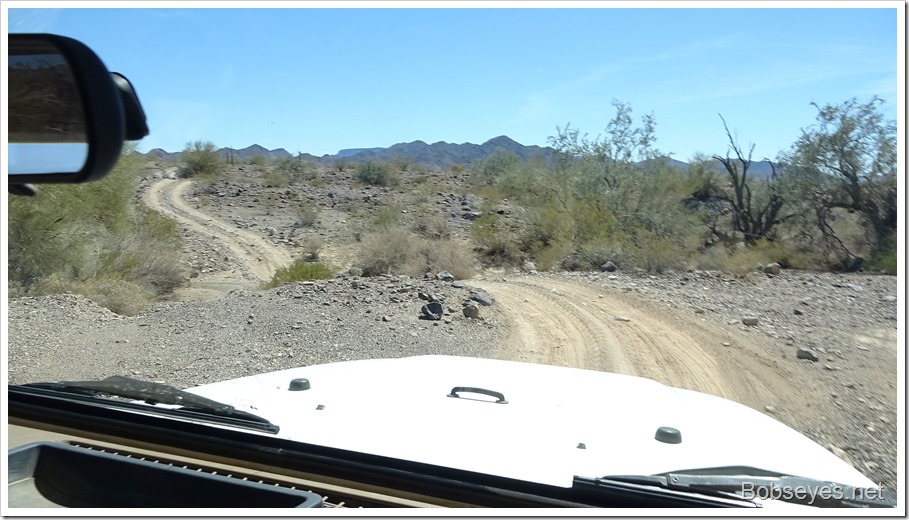 We continued on for another half hour or so on this road. 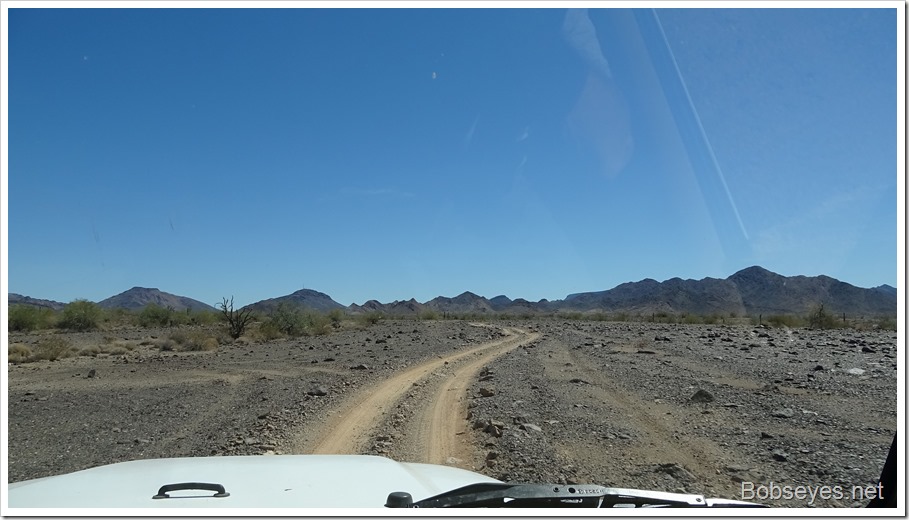 And stopped at this spot and flew the drone some more. 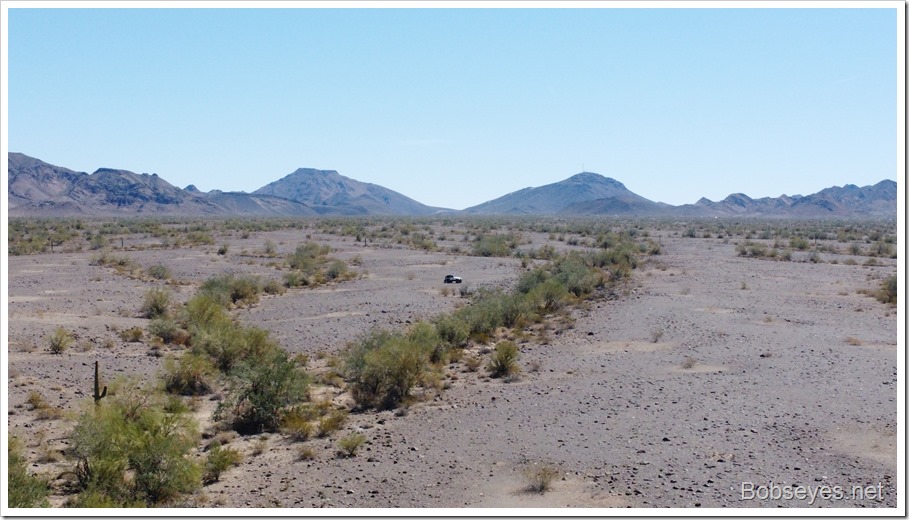 I flew the drone a bit checking out the area. We were in an old army base in the desert spot. 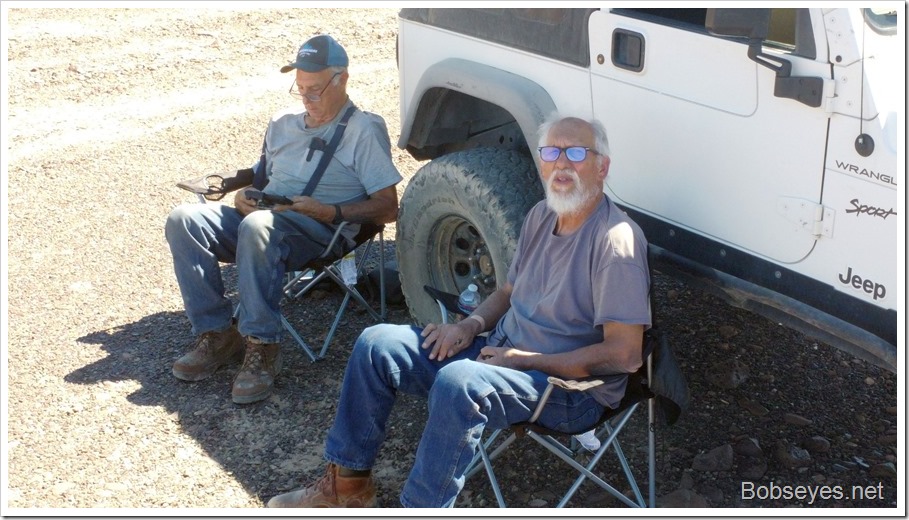 Then I let Marty take over for the rest of the battery. He was digging it. 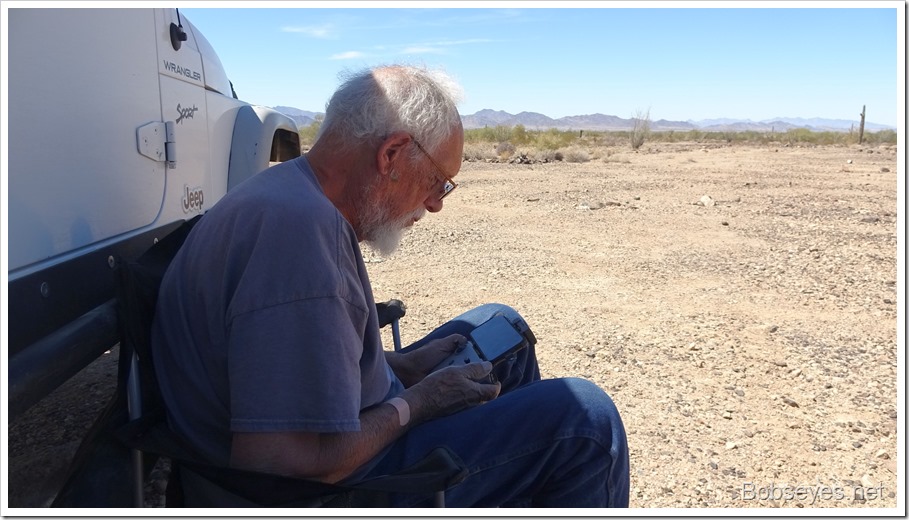 The rocks are from the old army base and more old tank tracks. 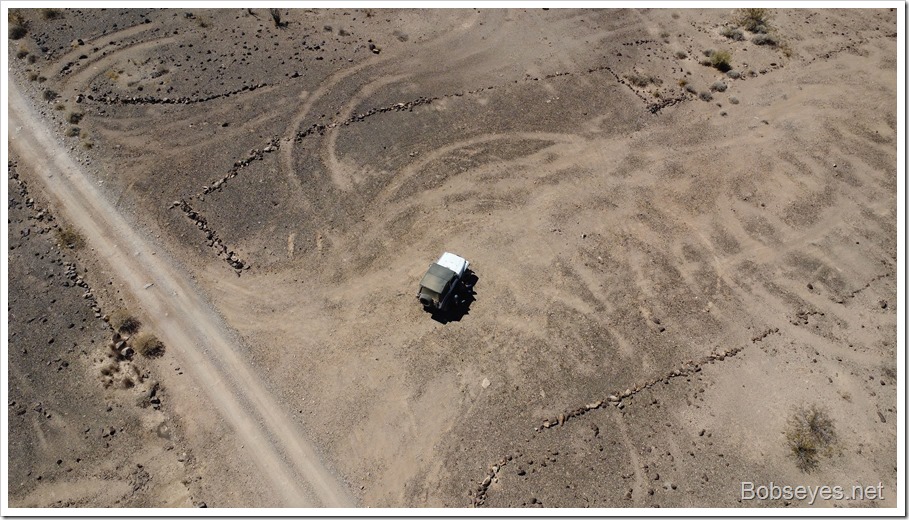 We practiced following this rock line low to the ground to get some control practice. 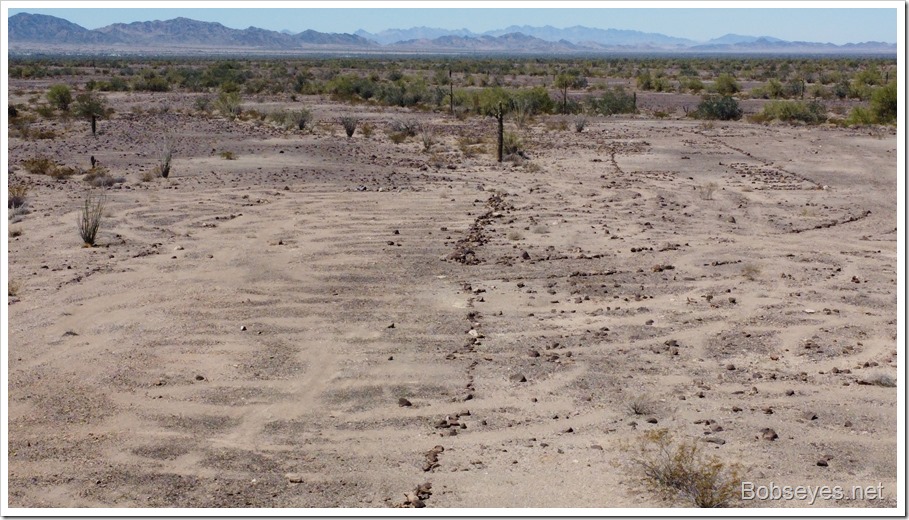 Once the drone’s batteries were depleted we headed in the direction of home and eventually made it back to a paved road and went back to Marty’s place. 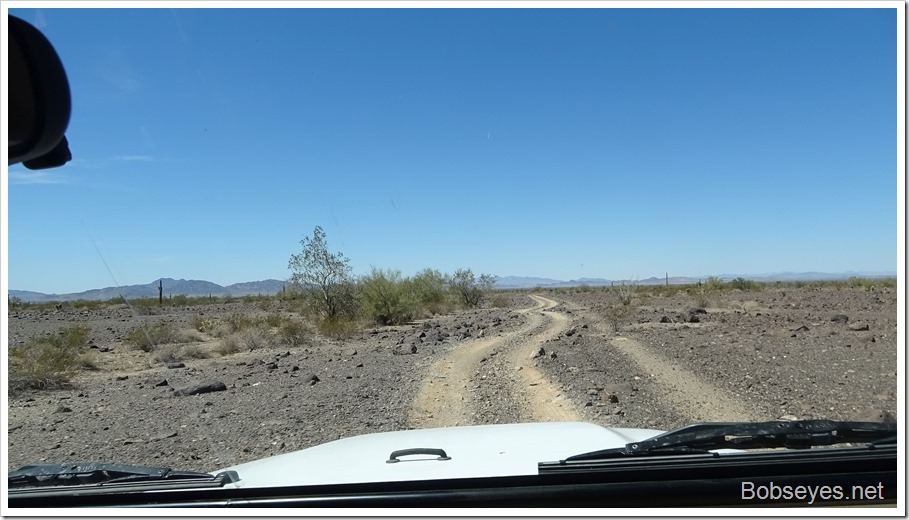 After a good rest I got in my van and drove on over to visit Adele at Rainbow Acres. We had a good chat then I headed on over to visit with Crazy Donna at her rock house. There are big crystals embedded in the chimney rocks. The next photo is of the ones at the top right. 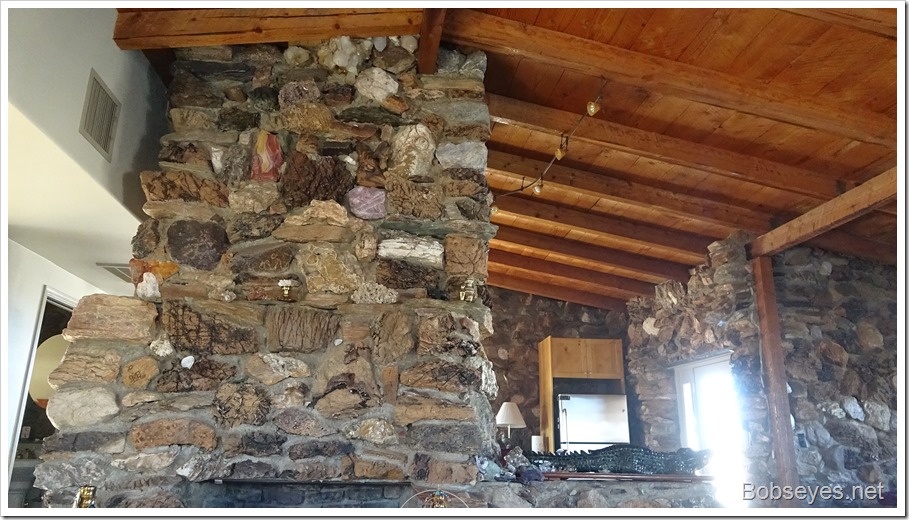 There are crystals like this embedded over over the rocky walls. 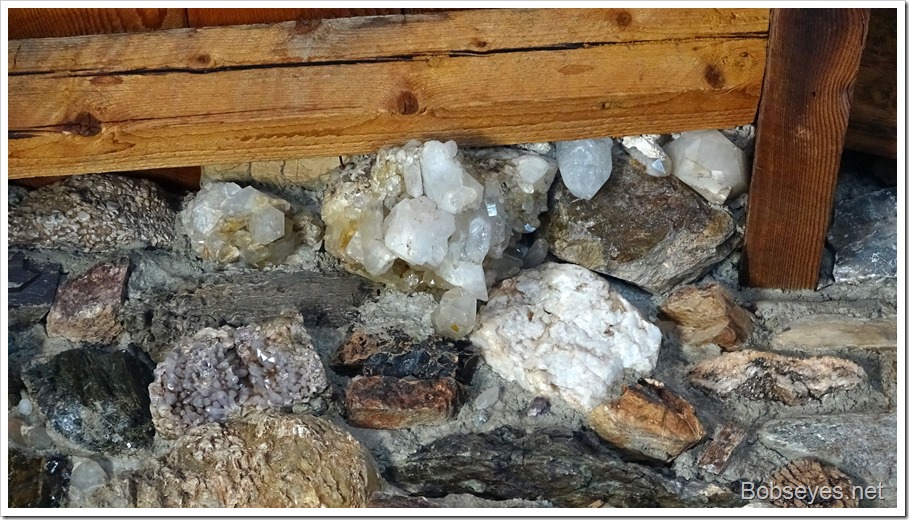 And this is one of  Donna’s little rock stashes. 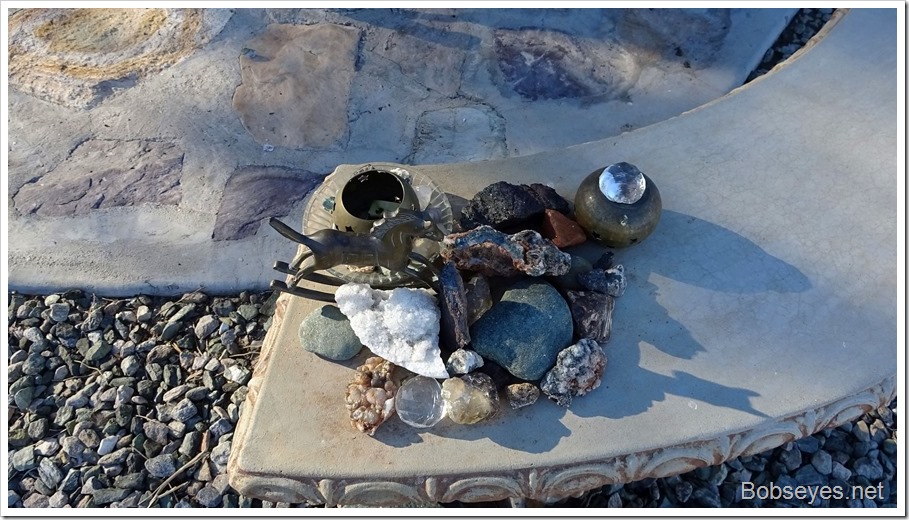 And here’s Crazy Donna herself. Check out the walls of the house. 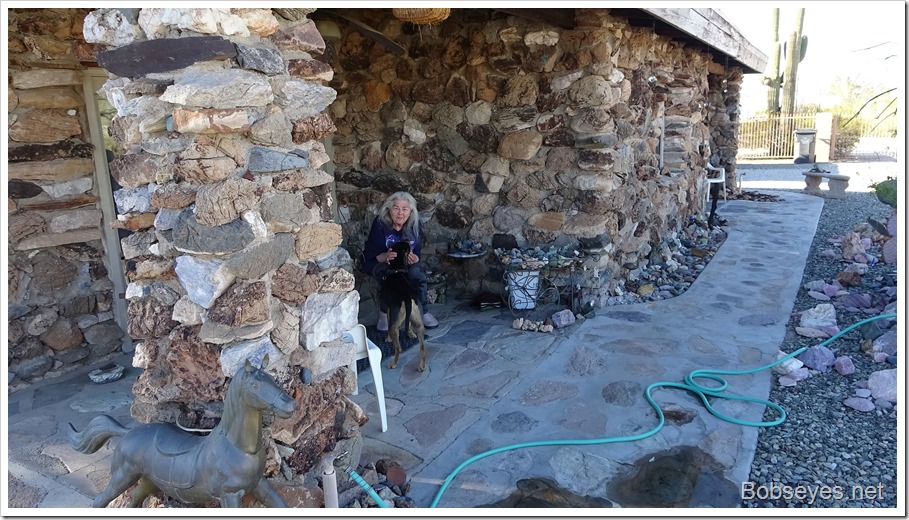 Donna told me why she is called crazy Donna which I think is at least part of the story.

When she bought this house the people down here couldn’t believe she would buy such a house just to live in and not make it some business type venture. Pretty simple but I think she has added to the story with all her own rock stuff which she has a passion for. And she is a bit far out in her own way, in a good way.

After a good visit with Donna I went on back to Marty and Patti’s place were I will spend the night.

I plan to head out going up highway 95 North to work my way home. I hope to kayak the Bill William’s river just above parker a bit so I’ll post when I get internet.