Marty came by today to continue our planning for a trip we are going to do in about a month.

We sat around the yard and did some planning and looked at some maps and settled on a few things about which way to go, but didn’t cast any plans in stone.

Then we walked around the yard eating berries and fresh fruit.

Marty asked if I had a trail cam he could borrow to check out some stuff in his yard. My brother Tom had all my trail cams. When he came by I asked him to bring one by so he did. He said he couldn’t get the pictures off this cam.

We checked and there were over 5000 pics on that cam. I copied the pictures to my computer so I could go through them later, to see what was on there.

We ride up into the hills

After that we rode up into the hills for a ride and to show him the old animal trail I’ve been working on.

Just after we got started on our ride I realized I’d forgotten my camera. I seem to be doing that more lately,  maybe something to do with older age.

At any rate we had a good ride and went up to my cousin’s place to the Top of the World and then down to my trail area.

From there we headed for home where Marty took off for his home.

I did some chair hopping and took care of the chickens.

Since I didn’t have any of my own pics today as I forgot my camera, I decided to go through all those pictures and see what I might see. Tom had put this trail cam out after something killed about 50 of his chickens in one night. He  has a lot of chickens as he sells eggs at the farmer’s market.

Tom had a lot of pictures because he wasn’t careful enough how he set up the trail cam. The sunlight made shadows and the weeds in front of the camera triggered it many times each day.

So I had to go through the pics and delete all those false triggered pics and got it all down to 240 pics with critters in them.  My finger got tired of hitting the delete button.

I gave him a copy of those and here’s a few of them.

Quite a few possums were in the pics. 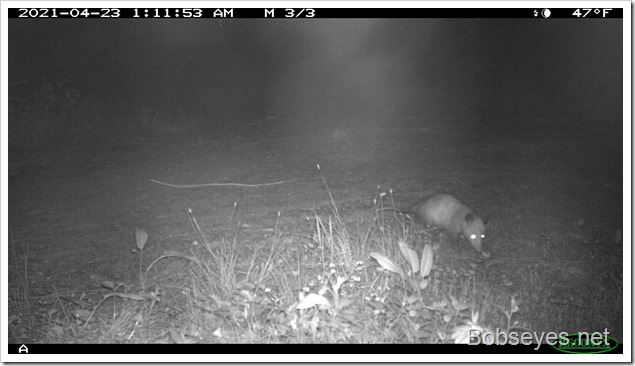 And here’s the main killer, a bobcat. Night pics aren’t too clear, but I also found the lens was real dirty too, but these give one the idea anyway. This bobcat is hauling a dead chicken away. 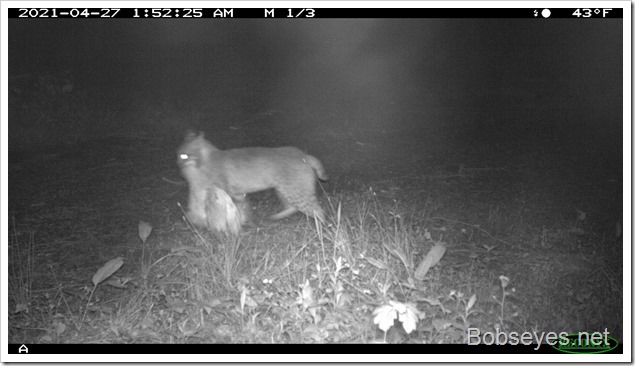 Quite a few foxes went by but none with dead chickens. 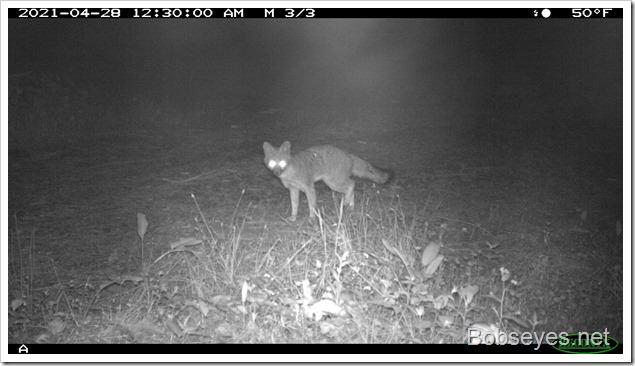 And the deer came by to eat some of the weeds in front of the camera. 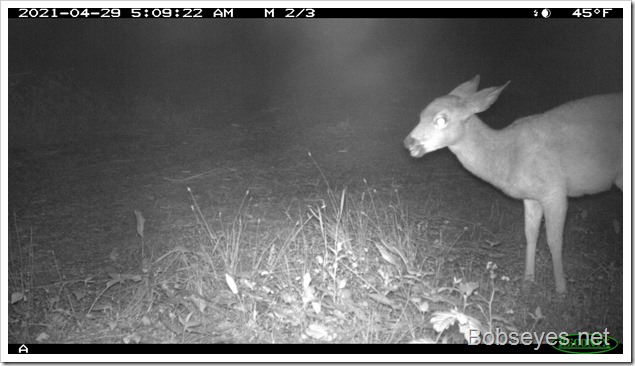 And the neighbors big dog came by once. He’s a friendly guy. 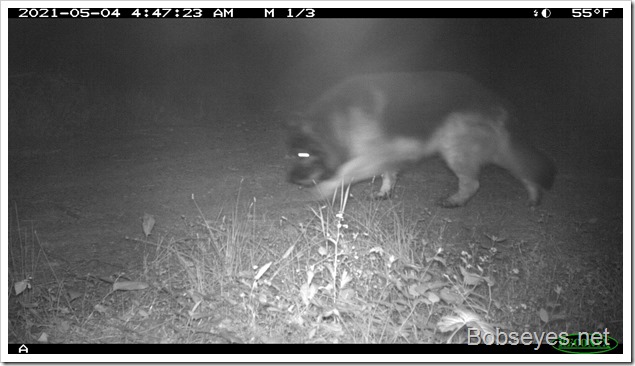 Lots of squirrels came by. They eat the fruit off the fruit trees. 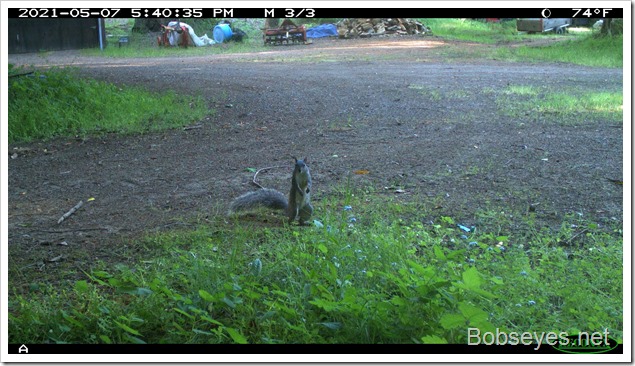 And here’s the bobcat taking another dead chicken away on another night. 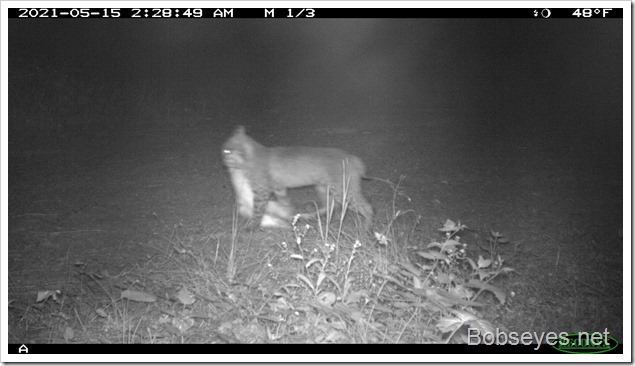 Tom’s working on  sealing up his fences at this time, patching holes and old rotten chicken wire to keep that bobcat out. It took him a few tries but he finally succeeded in keeping the cat out.

Two foxes go by. The same ones that were over at my place killing chickens at the time, I think. They didn’t seem to get any of Tom’s chickens. They killed four of my birds. 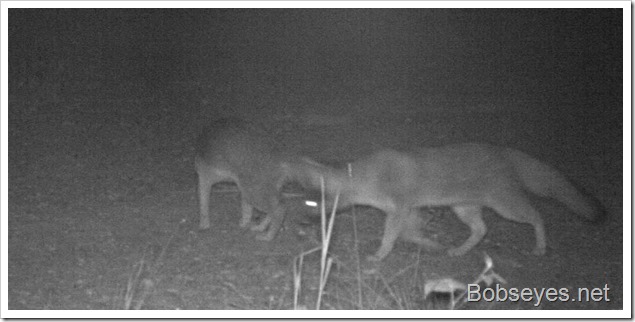 The bobcat goes by again after Tom worked on sealing up his chicken pens. He goes home empty handed, or empty jawed, I guess. 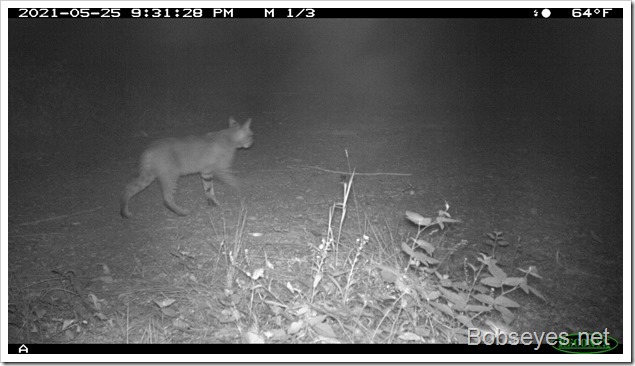 And the cam caught this dog going by in the daytime. 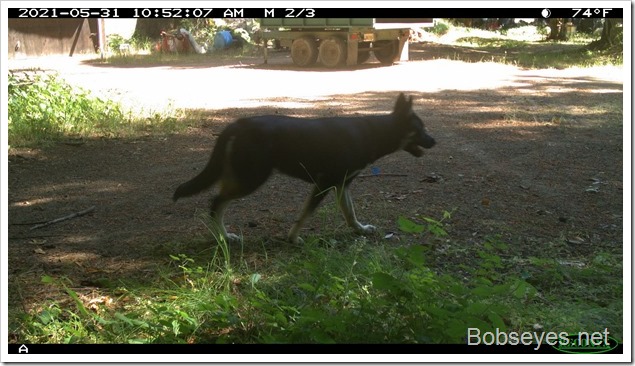 You see all the light in the picture above on the ground. As it moves in the day it triggers lots of pics with no critters in them.