Day after the storm

I got out of bed early this morning for a drink of water but all I got was a faucet sucking air. Oh, oh. That pretty much means our main water line from our water tanks is broken somewhere which is most likely where the water line crosses the creek.

That meant I’d be working on repairing the water line today instead of what I had planned.

I went back to bed for another hour or so than got it going for the day.

I still had no power since the storm last night. I was able to get a cup of coffee going on my gas burner.

Broken pipe at the creek crossing

Just about the time I finished up my coffee I  heard someone shout outside so I went out to see what was going on. It was our neighbor Iggy telling me we had no water and a tree had fallen across the water line at the creek crossing by his house.

Most of the rain had died down but there was still a shower or two. We headed over to the creek so I could see what was going on and what we needed to do to fix that pipe crossing up so we all had water again.

Here’s the pipe going across the creek. You can see a small tree on the pipe but there’s a bigger one just out of sight just below that one and both ends of the water pipe are broken off. 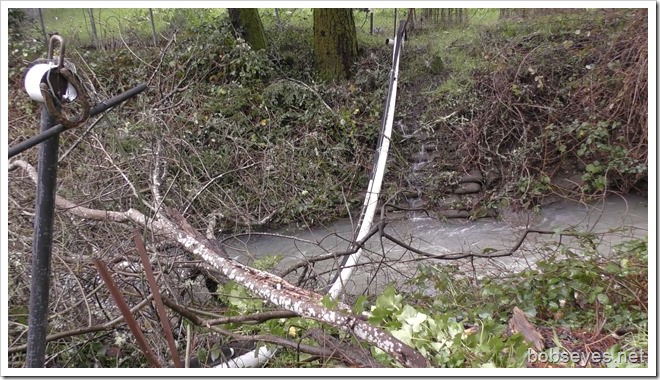 It looked like I needed to get the chainsaw out to cut the trees in parts so we could get the water line freed up, so I went back to the house to get the saw.

We got the trees cut up and off the pipe and then we had to get the pipe back up in the air and repair the cable that holds it up.

Here’s Iggy looking at one end of the broken pipes we were going to have to repair just after we got the trees off the line and the broken ends of the pipes dug out. 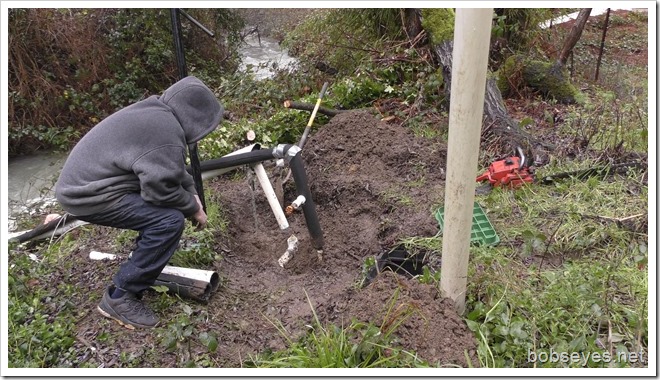 I put Iggy down in the creek to lift the pipe up while I pulled the cable but no go. The pipe was full of water and we couldn’t get it very high up in the air. Just about that time Steve my brothers helper came by so I put them both in the creek lifting the pipe which they could barely do. But as they lifted the pipe water flowed out both ends and it got lighter quick so we all three where able to get the pipe back suspended in the air.

There’s actually two pipes crossing but we are only interested in getting the larger one to our houses fixed right now. The other one goes to my brothers vegetable garden and chickens.

Here’s the pipes back up in the air where they belong and now ready to fix the ends. Good thing Steve came by or we’d likely not of gotten the pipe back up without cutting it to  let the water out. 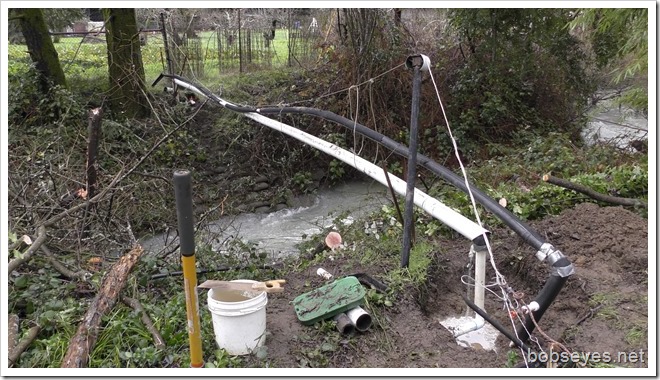 Off to the hardware store

I had to go to town to get some glue and some pipe parts. 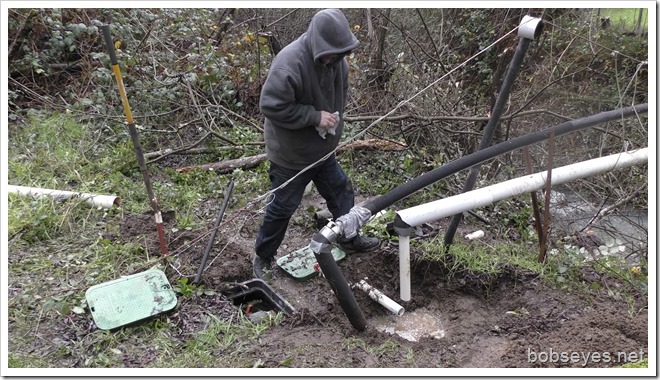 Then we walked around to get to the other side of the creek to repair this side which we did after digging it out. 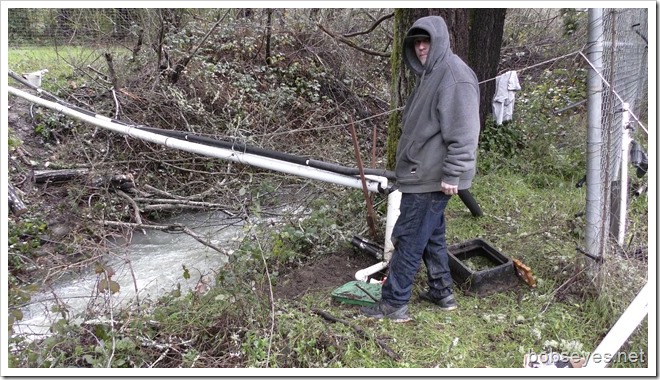 We decided to wait about a half hour after we did the gluing to make sure it was set so I went home for a break.

Turning on and testing the line

When we got back I sent Iggy across the creek to turn on the main water valve saying to turn it off if you see any water spraying. 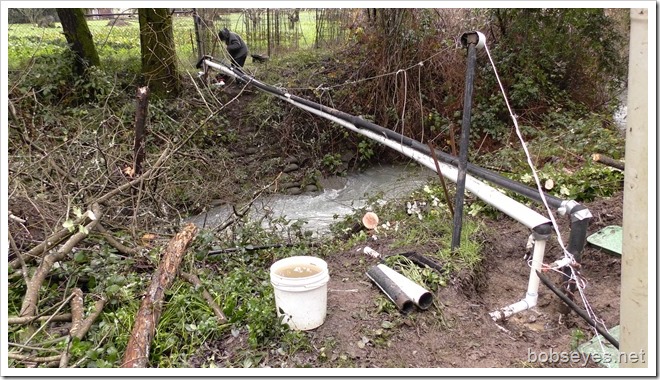 Iggy turned on the water and there were no leaks. We got a bit of dirt in the  line while repairing it so I let a bit of water out of the pipe on my side before closing the valve and charging the main line.

Blowing the line to let any dirt out

Then I went on back to my house and let some more water out just in case, …..no dirt wanted. 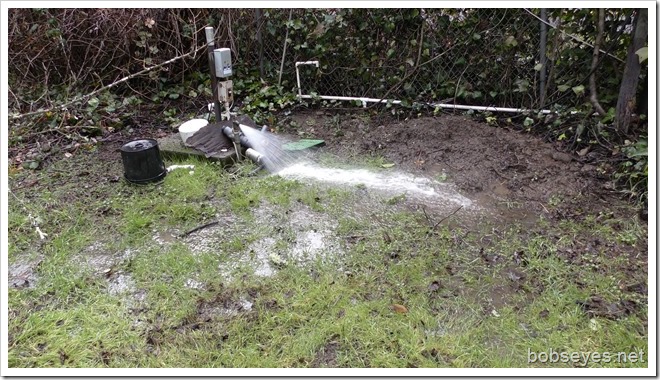 Wrong about the power

I let the chickens out to graze early today. 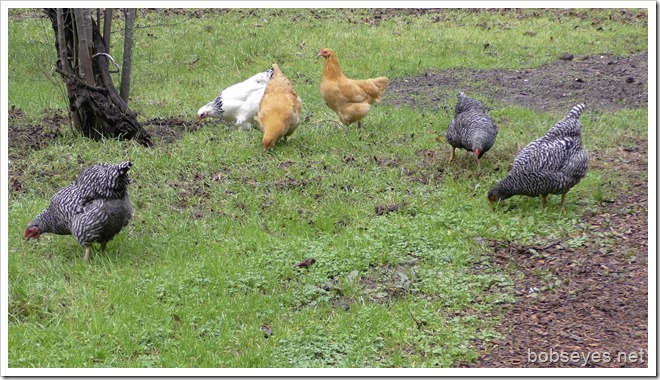 I checked the creek in back of my house and it all looked good, no problems there. 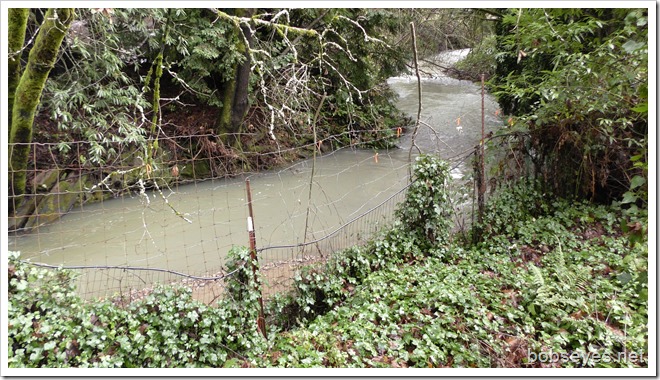 To worn out to do much more work

I was pretty worn out from fixing the water line and my back was hurting a bit so I knew I wasn’t going to get the downed redwood limbs cleaned up today. 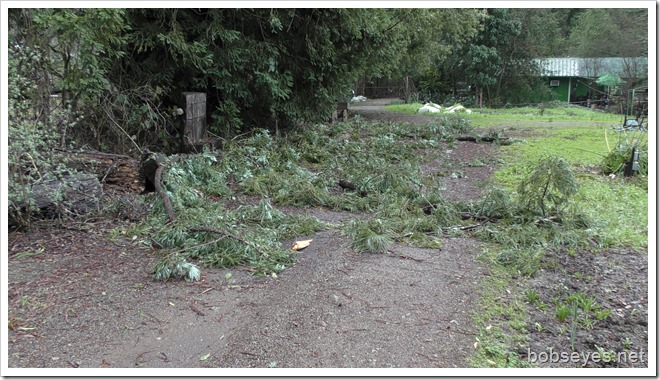 I was able to move some of the stuff to make a path through the mess which would work for now. 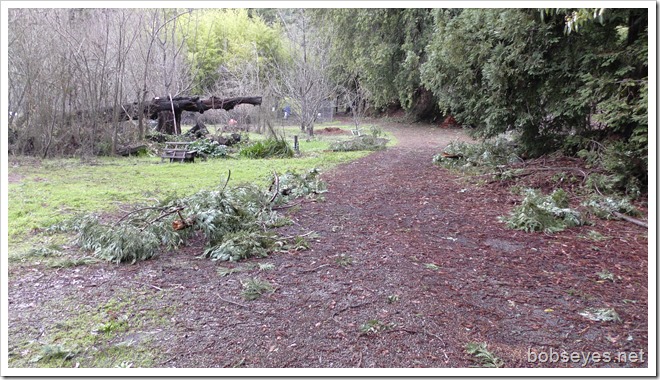 Neighbor has power but not me

I still had no power when it got dark for the day. Around 9 I was looking out in the dark and it looked like my neighbor had power and I didn’t hear his generator running. I got suspicious and walked over to my brother’s house who was on vacation but due back late tonight. Both our houses are on a side line off the main line and we are the only ones on it.

A big redwood limb struck and knocked our power out

What I found was a big redwood limb stuck in his main gate and it looked like just our two houses still had no power. The power lines go right over that gate, but they were still up but I think it blew the line fuses to our houses.

So after much looking for the power companies number I called and left a message with the automated message service.

My brother Tom and Dominique showed up around midnight so I had Dominique call in to the power company also. She got a person but nothing could be done until sometime tomorrow.

That pretty much wrapped up the day. At least we all had  plenty of water now.