I was sitting in front of my computer this morning just about to go outside and see what I could accomplish when the phone rang.

My dentist had a cancelation and wanted to know if I could come down at 1  to get my new crown and get another old crown prepped for another new one as it had decay under it.

Sure, I said let’s get it done, see you soon.

So I puttered around the yard for a bit checking the chickens feed and water and doing a little watering in the yard.

Headed to the dentist

I did change out of my dirt clothes into something a bit cleaner and headed out for the dentist.

The temporary crown wouldn’t come off easy as it should so it had to be cut off, but things went well after that.

My new crown was prepped and I paid on the way out. Ouch.

Next I wanted to know why I had so much corn mixed in with my crimped oats I bought at the feed store the other day so I headed for that place as I was already half way there.

I showed the guy at the counter a sample of what I had with  the crimped corn in it. He took one look and said they gave me the wrong thing. He didn’t want the opened bag I was returning and gave it to me so I’ll give that bag to my brother for his chickens. He replaced the wrong bag with the right stuff and I also bought a bag of oat bran as the chickens seem to like it.

From there I headed home but stopped to visit John and Cheryl for a bit talking about chickens and camping and things. I  hope to get up to where John hunts this fall in Idaho in about a mouth if I can get my dental work done in time.

The day was almost over when I got home.

I put the feed away in the coop and sat down in the smaller peeps pen where I have a chair where I take breaks and watch the chickens.

This little one jumps up on my lap right away as she’s been doing for the last several days. 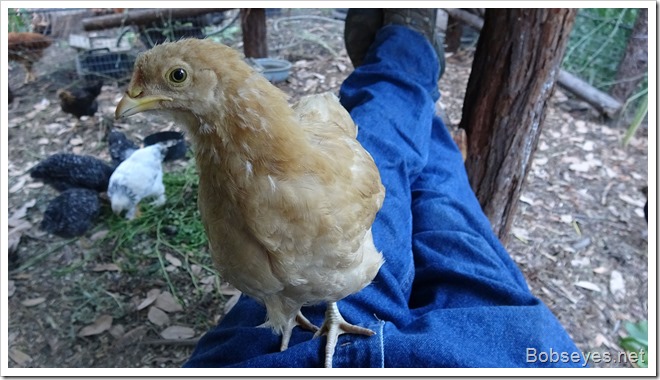 This is what she wants, a nice warm lap to rest on. 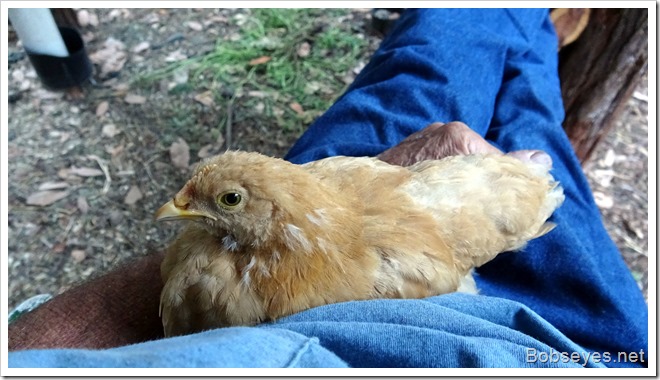 I went out and found some weeds to pull for them to eat. 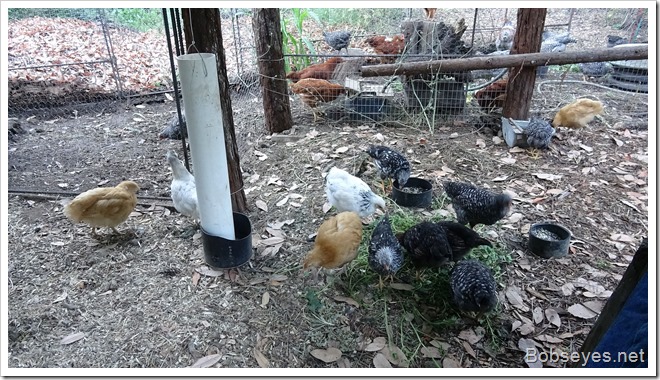 My smaller chicks sleep here on this wooden box while the bigger chickens are in the pen behind them. They can’t be easily mixed as there’s this thing called the pecking order which would be hard on the smaller chicks. Mixing them seems to be an art, especially smaller ones with larger ones. 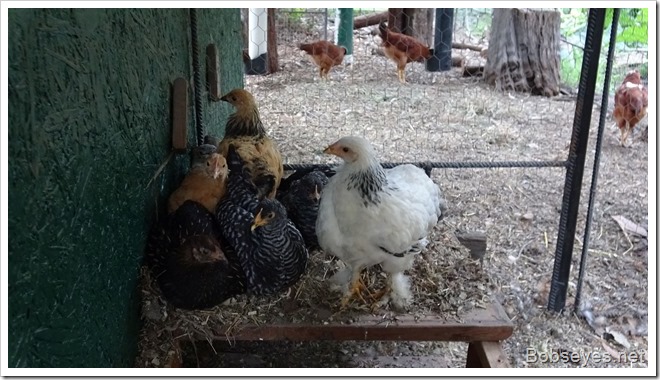 That pretty much did it for me today.