Lots of Birds While Kayaking the Closed River’s Mouth Area

It looked like the wind was to be down today at the river’s mouth, so.

I  headed out after feeding the chickens and  letting them out to graze.

I unloaded my yak and parked the car. It looked like a real nice day as I put my boat in the water. I did notice the water level was high looking like the river’s mouth was closed to the ocean backing up the river. I asked a guy I knew how long it’d been closed as I’ve been too busy to yak. He said it’d been closed for about two weeks. 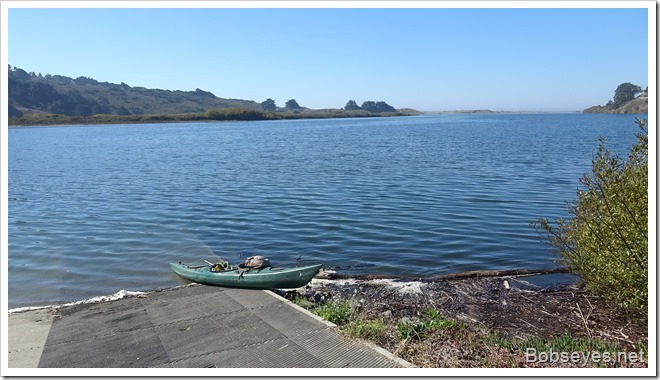 When the river’s mouth is closed the river is like a big lake at the estuary.

I wasn’t sure which way I wanted to go today, up or down river so I crossed over to Penny Island and decided to check out the little channel on the upper end here where I sat for about a half hour just enjoying the day. 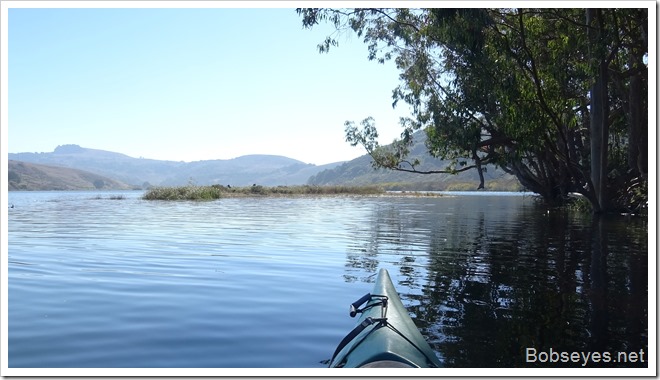 Down the back channel

I still couldn’t make up my mind which way to go but eventually decided to paddle down the back channel of the island down this way after sitting in this spot for awhile. 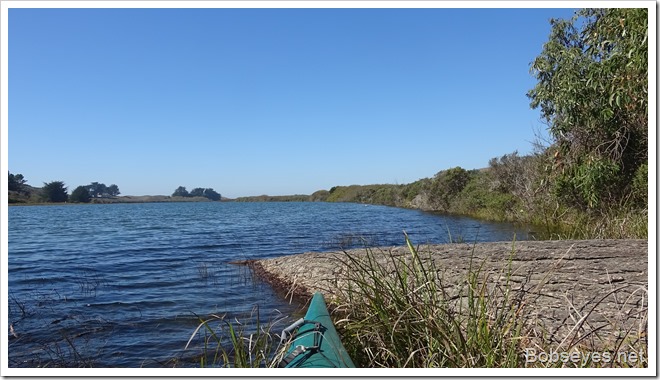 I was paddling along when I saw this creature under the water so I went over to have a look to see what it was. Humm. I’ll find out later. 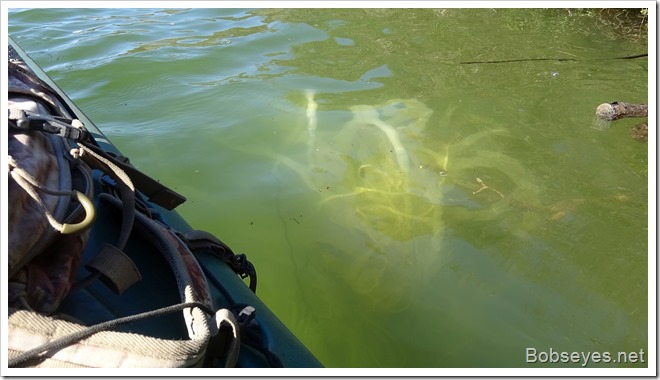 I sat in this spot for a bit on the way down the back channel. 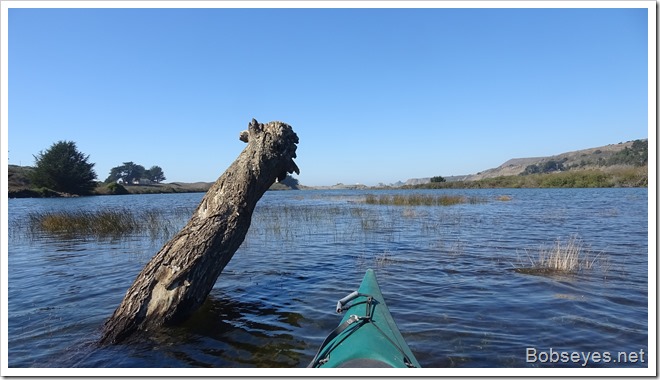 And by this dead harbor seal. I don’t see many dead ones down this way. 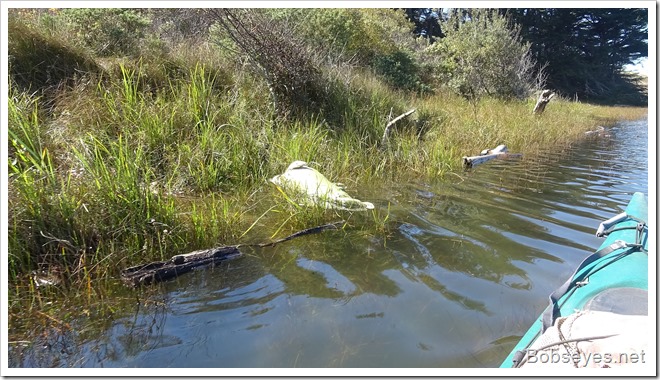 I was headed for the closed river’s mouth up ahead and could see and hear the ocean waves breaking on the beach and a lot of birds down there resting on the sandy beach. 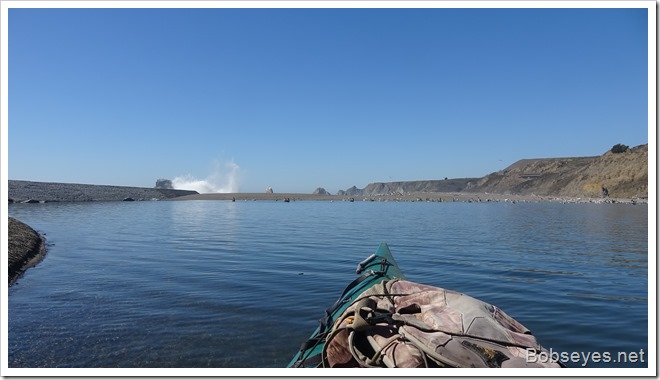 As I got closer a big wave hit making a big boom which spooked a lot of the birds into flight. 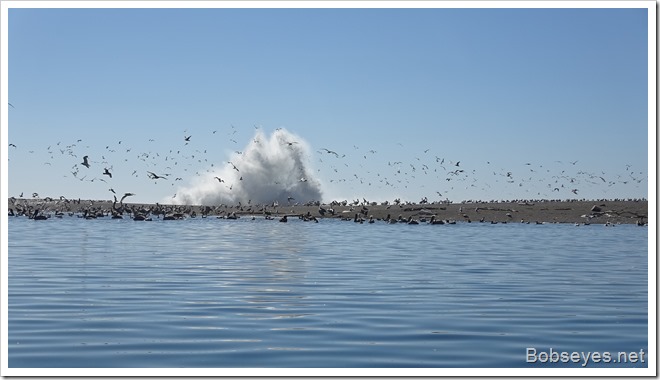 You’d think they’d all run into each other but somehow they keep it sorted out. 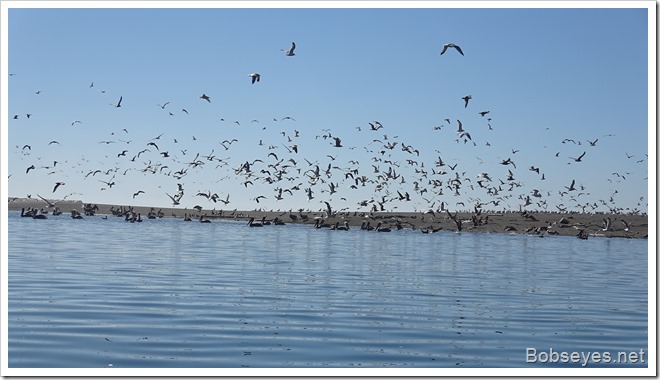 This is where the river’s mouth usually goes into the ocean at this spot. But when the ocean gets rough and the winds blow the sand can get piled up in the open mouth and dam it up like this which causes the water level in the river to rise. 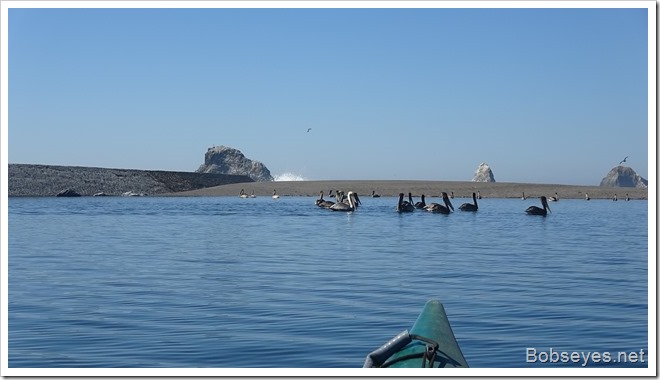 Lots of pelicans and gulls resting and preening as I paddled on by. 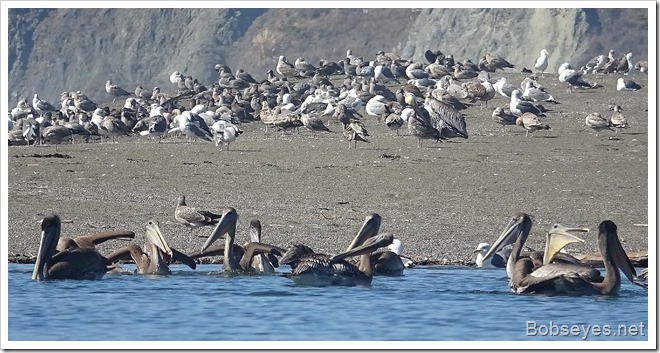 The answer to what’s this

I spotted this kelp in the water which is what was under water on the back side of the island. It gets sweep into the river when the ocean gets real rough. The stuff under water was more decayed than this bunch. 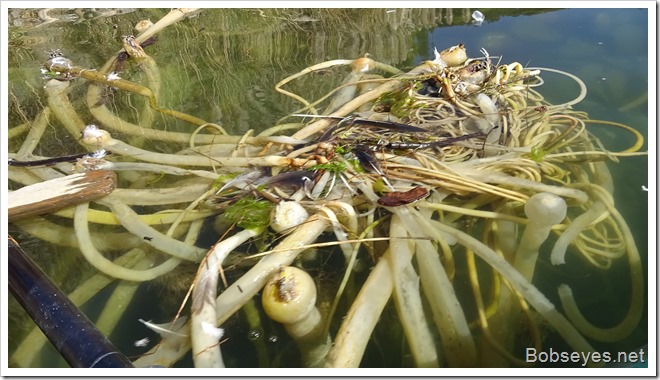 After hanging out at the closed mouth area I started back up the river. 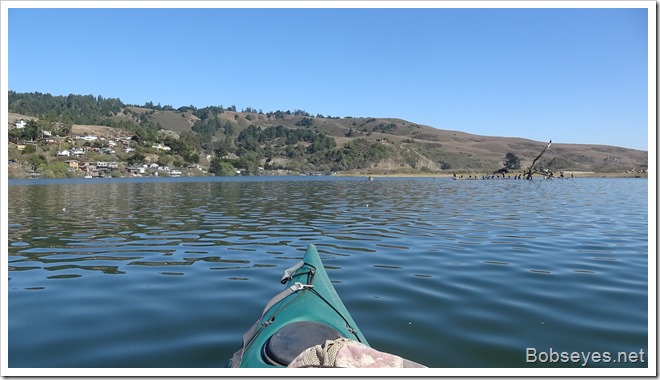 Paddling by these cormorants resting. 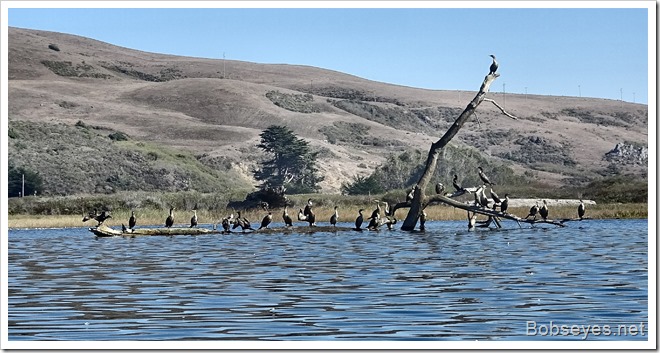 Headed to the boat ramp

And headed back to the boat ramp just up ahead and pulled the boat out and went on home for the day. 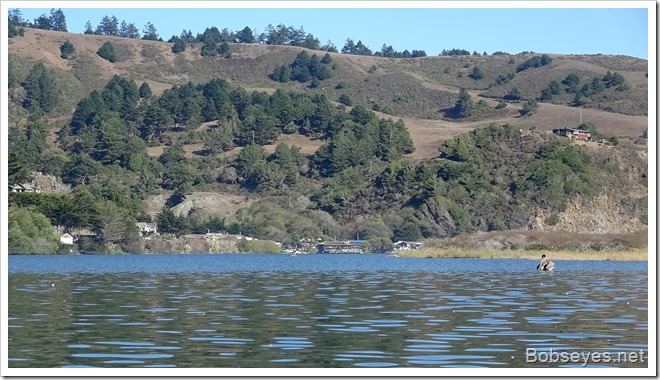 Of course being near the ocean one gets a tired out feeling and one needs a nap so that’s what I did.

A bit of chair hopping in the evening and that was my day.