I arrived at Jenner to sun and low wind so it looked like it was going to be a nice day.

I put the boat in the water and paddled into the river’s current and headed on down stream towards the river’s mouth area.

I paddled down along the north shoreline that looked like this. 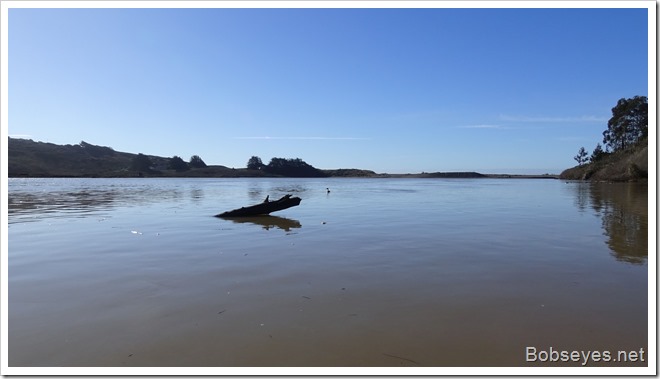 Lots of ducks on the water today

I went past these ducks.There are lots of ducks on the lower estuary right now. They seem to be successfully feeding even in the muddy water. 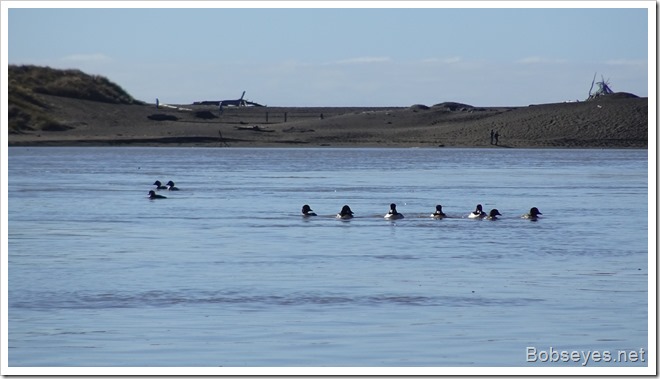 And lots of big planes in the sky

I made it down to the mouth area and was sitting talking with a couple people when the guy noticed some big planes flying by low just over the mouth. 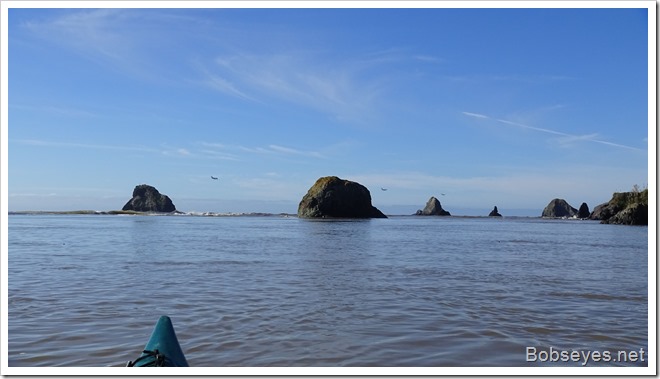 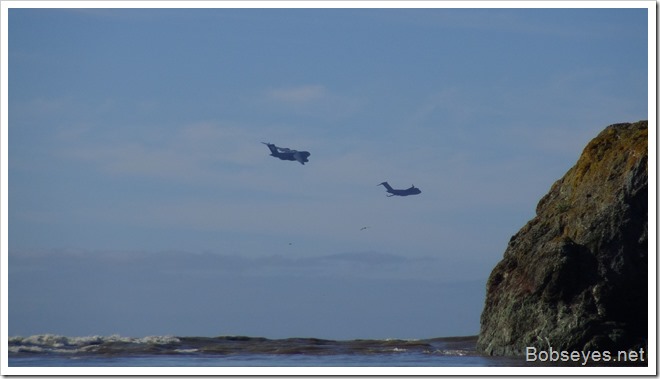 As it was, I pushed some wrong buttons on the camera and it got stuck in a delay so I didn’t get the best pictures of the planes when they were the closest to us.

The river’s mouth was open about twice as wide as normal.

Looking out the river’s mouth into the Pacific ocean. Beacon rock there. 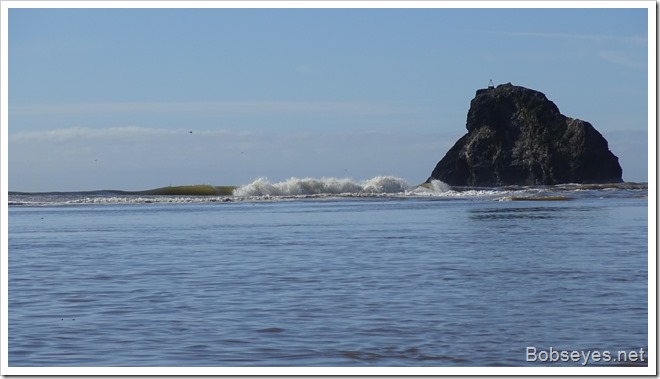 Eventually I headed on back up the river. It was a fine day. I could see some cows grazing up on  the hillside above Jenner. 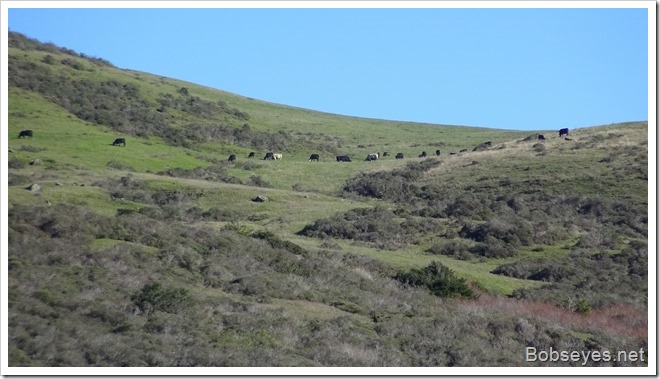 Heading on up the river along it’s edge

I continued on up the river going past the upper end of Penny Island and continuing on up along here. 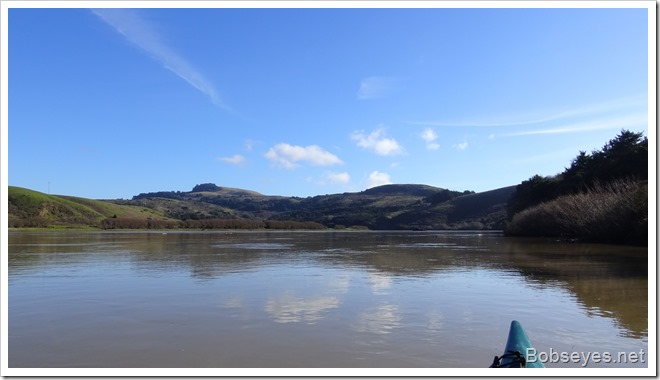 I slowly made my way up to the muskrat area and sat for a bit, then crossed over to the other side of the river to look for birds.

I could see a bunch of them up ahead. I decided to take the inside route, taking a chance of getting caught in the shallow water just in front of the birds. I thought I could make it over it, but I was wrong, the river had moved more gravel into this area during the high flood waters. 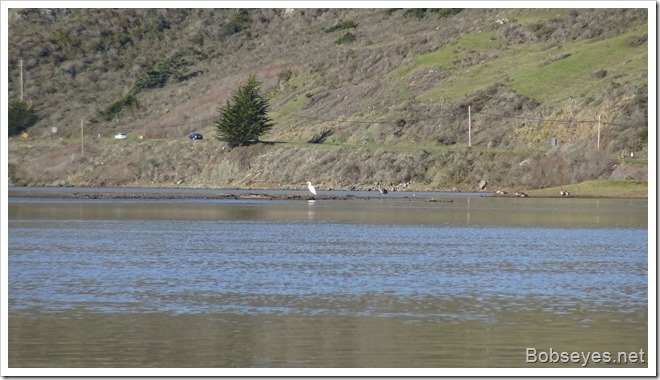 This pair of mallards was resting on the shore as I went by. 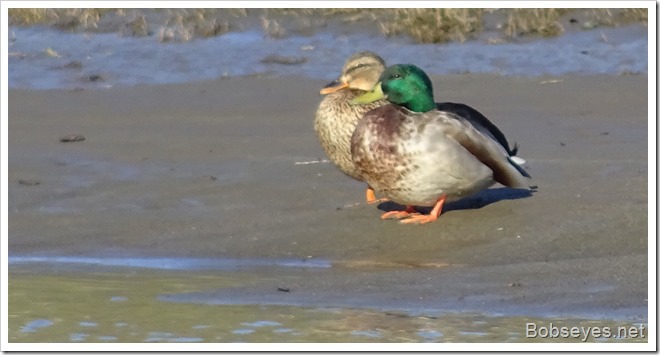 And all these mallards checked me out as I approached. 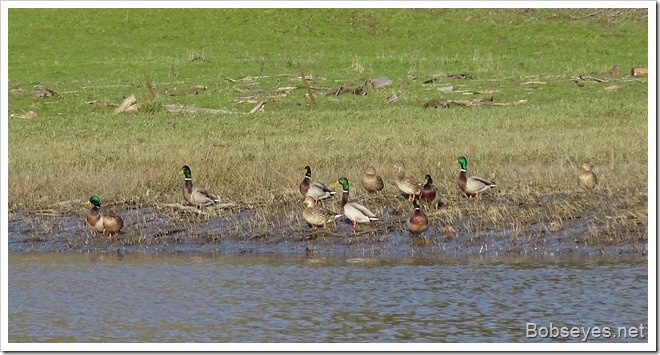 There were some geese there too honking a warning, making a lot of noise. 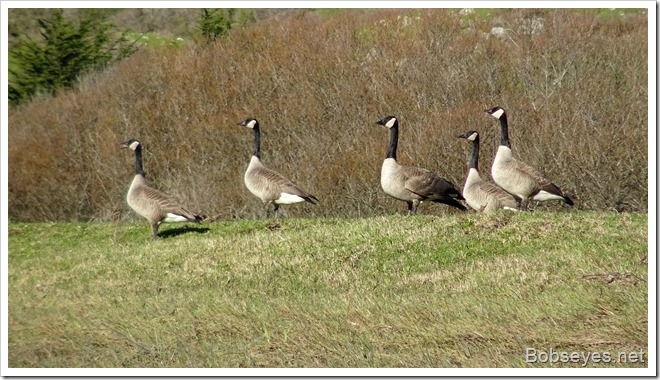 Stuck in the gravel

There was a fairly strong current were I was and it pushed me into this shallow area. I sometimes can make it through this area if I stay close to shore, but not today. I got stuck with the current pushing me down into the gravel more, so it was hard to get back out. I had to push into the gravel with my paddle going backwards, but with the current pushing and my boat dragging the bottom, it took a lot of effort. In the process I scared all the birds away. 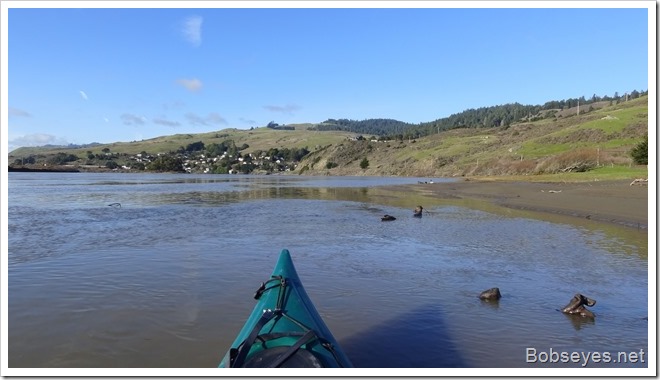 I did get turned around finally after expending quite a lot of energy and paddled back up to Paddy’s rock to get around the shallow spot.

These male and female merganser ducks were resting on the gravel by Paddy’s rock. 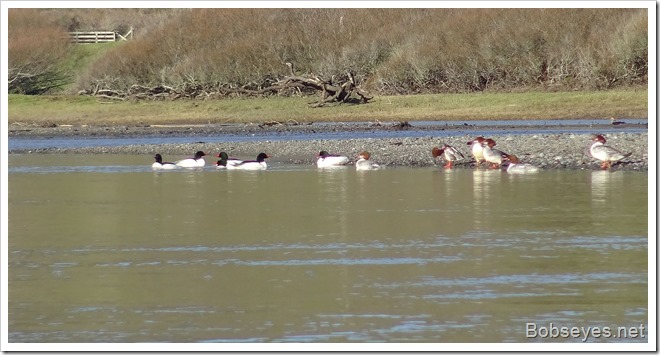 I put my boat into the down river current and drifted on down along here headed for the boat ramp at Jenner, just up ahead. 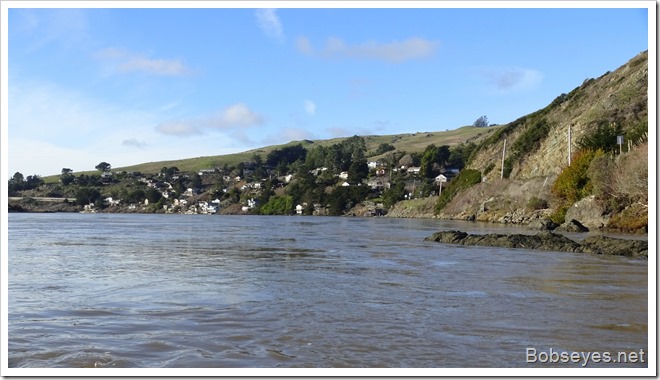 The tease bird sat still for a change

As I drifted down I spotted a tease bird in the bushes so I tried for a picture and surprisingly the kingfisher didn’t fly off. They’re a hard bird to get a close detailed picture of as they usually fly off just before you push the camera button. 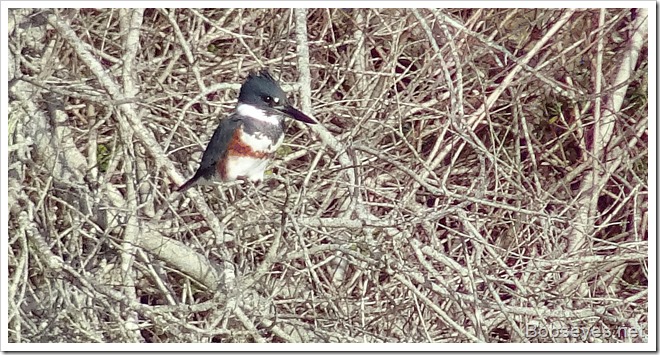 I pulled into the boat ramp and put the boat on the car and headed on home. I stopped at the Monte Rio boat ramp to check it out. It’s still about fifteen feet under water and I think pretty muddy too.

I made it home for a nap and that was pretty much my day for a nice one./