I’m headed out down highway 95 to Horse Tank in the Kofa NWR. I turned off here on King Valley Road. 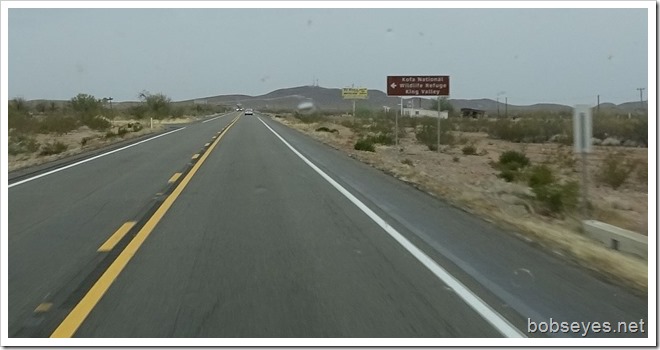 I stopped at the kiosk to check on the map. I’m headed to Horse tanks, the first right off the King valley road, number 42 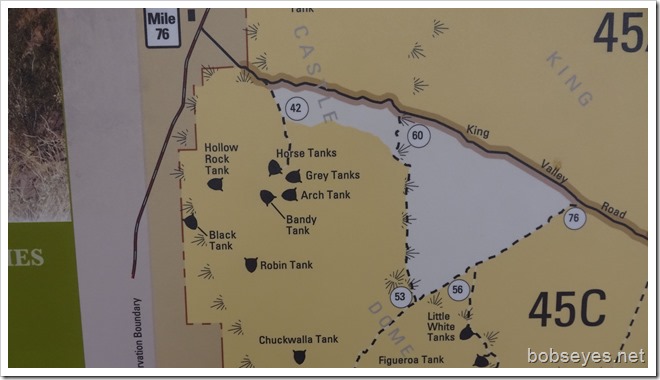 What is a tank

Tanks are what they call anything that holds water in this desert. A hole in the rocks that catches rain water is a tank as well as any man made thing that holds water so an animal can get a drink. Rocks in a creek that catch water are tanks. Most of the tanks in this area are rocky holes in the creeks which only run when it rains or the snow melts to fell up the tanks.

I drove out the road to Horse Tanks. It wasn’t too bad a little rough in a couple spots. 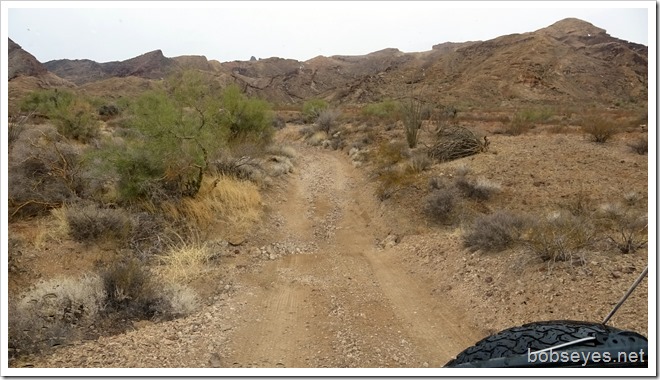 When I got to the grinder hole cave area there were about six jeeps there so I turned around and went back to the first camp on the left to camp which was not far from that cave.

The first thing I did was make a cup of coffee and relaxed. 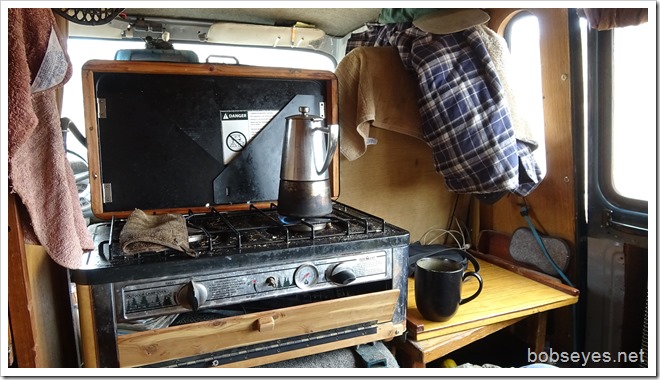 Everyone drives through your camp spot

Here’s my camp spot. A lot closer to the road than I’d like, but they won’t let you camp more than a hundred feet from the road anymore which sucks as it’s like every one that comes down the road is going right through your campsite. 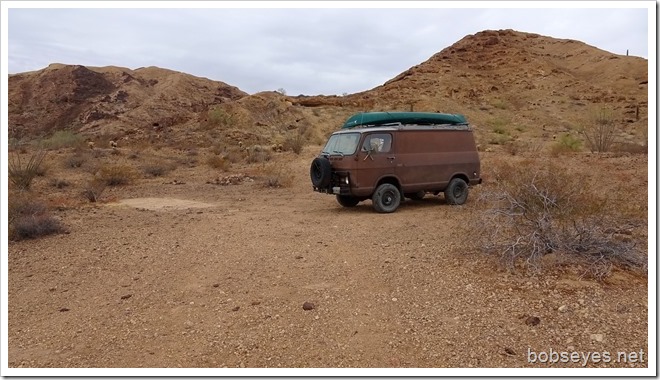 Finally checking out this cave and others too

Here’s some of what the hills look like around here. I’m headed out for a short hike up to a cave with rocks in front of it that I saw a couple years ago and haven’t been able to check it out until now. 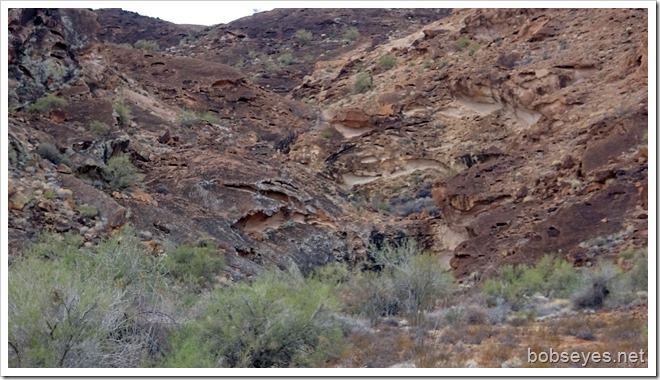 The cave I wanted to check out is up there on this hill side, so I’m headed up that way. 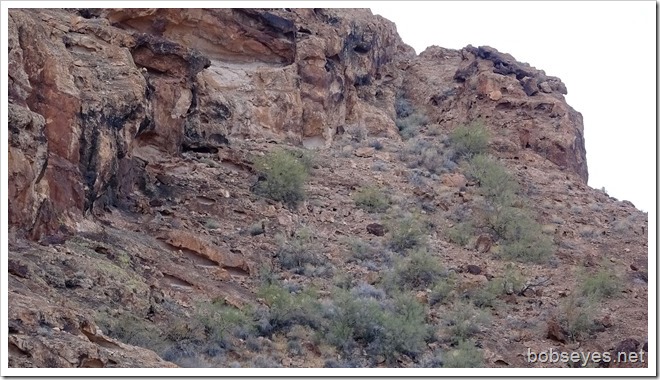 This is looking back to where I’m parked which I’d hiked through to get to this spot. 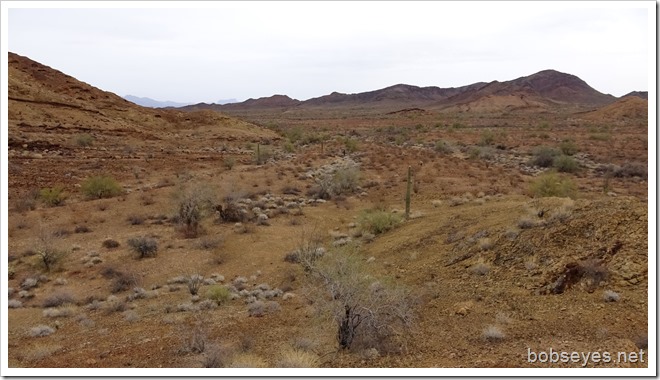 I passed quite a few caves that I stopped to check out. 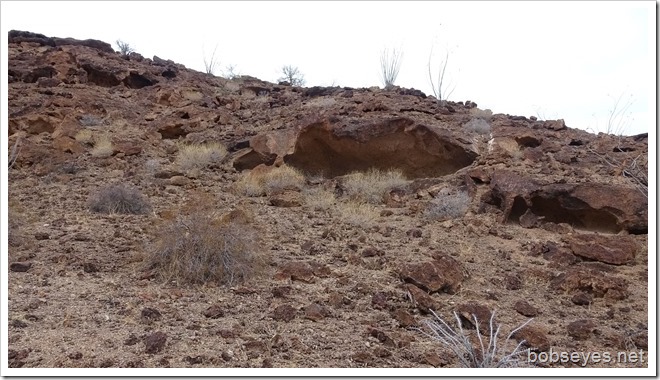 None of the caves looked like anyone ever lived in them.  Some of them  had animal droppings in them like an animal waited out a storm there. 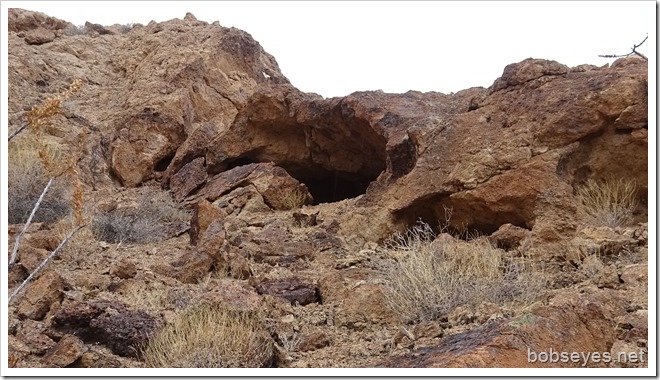 This was the cave I wanted to c heck out

Here’s the cave I saw with the rocks piled in front of it. Turned out to be just some rocks that fell off the top as it crumbled and it wasn’t very high either only a few feet. But at least the rocks is what got me to hike up to this spot. It’s called exploring. 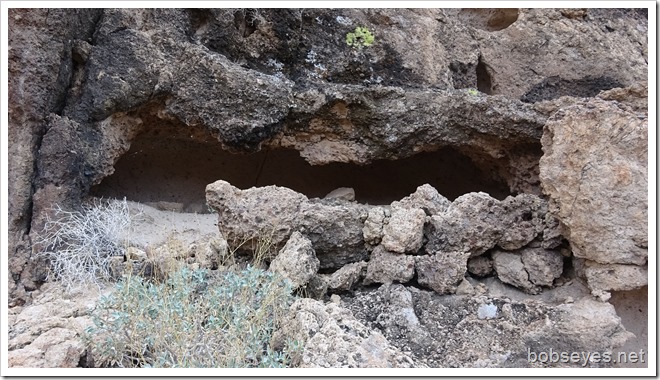 I took a different route on the way down walking along this ledge as I went. 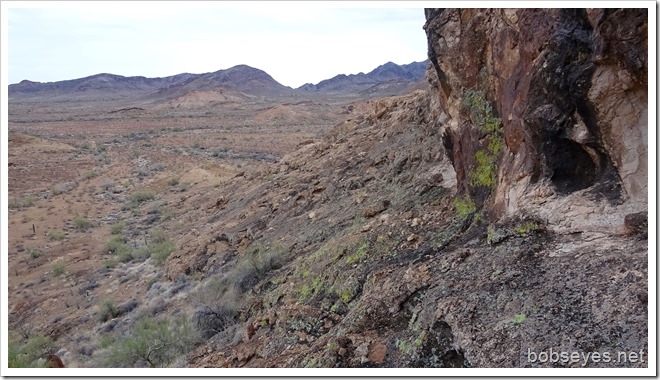 I’d stick my nose into anything that looked interesting. 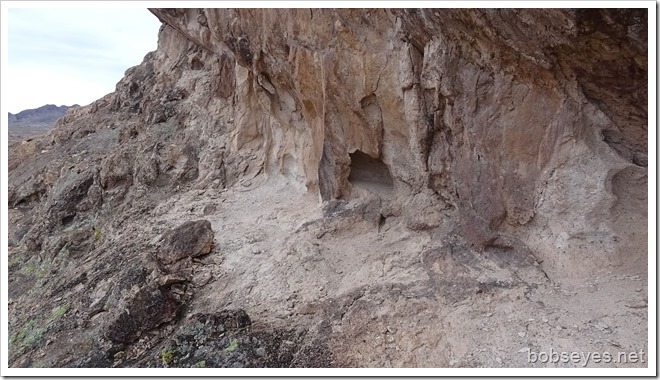 Things on the way

I stepped over this spider and had to put my glasses on to see if it was alive or dead. It was dead. It was a couple inches wide. 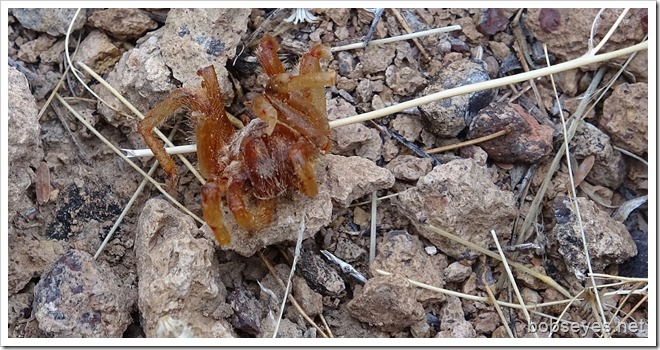 My eye caught this white thing up on a rocky ledge just above me. It looks like a honey bee nest with nobody home. 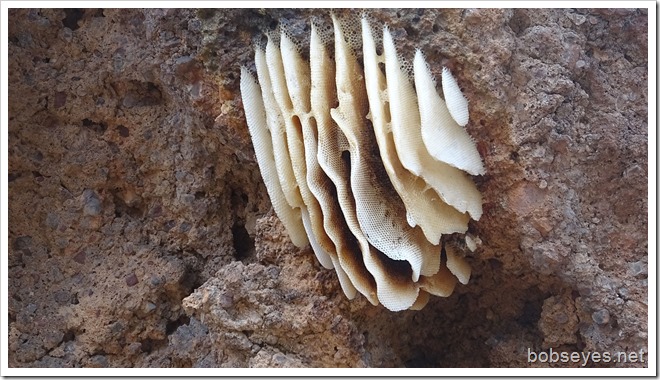 There aren’t many flowers blooming yet around here, but this one was as I was almost back to camp. 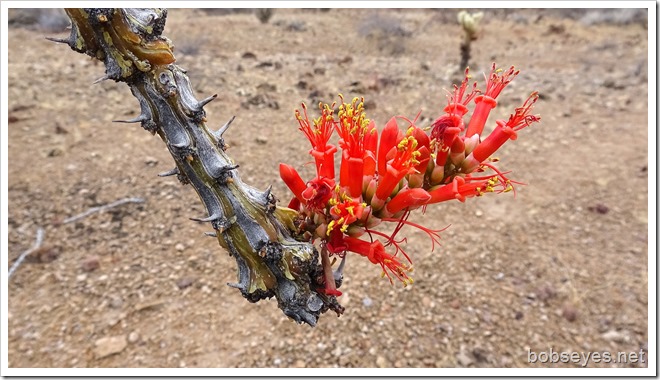 I was hungry for a snack so I put some pounded yam flour and some wheat flour and some salt together until I could roll it out into a three quarter inch round log. I cut that into half inch pieces and used my thumb to press the dough into these shapes, thus thumb crackers are born. 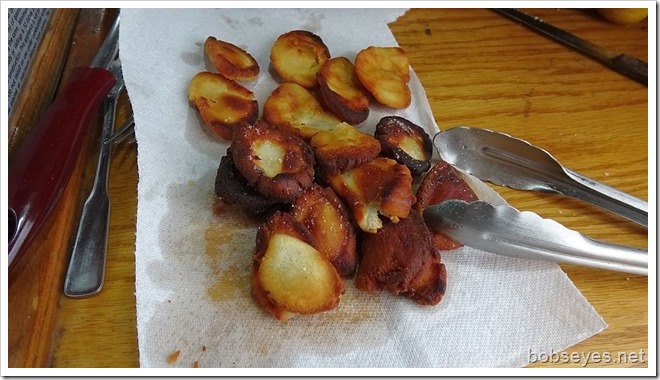 I fried them in coconut oil and they were pretty good as they all disappeared.

I got lost on this little hike

I rested up for the rest of the afternoon, but around 4:30 I thought another little walk would be good.

I thought I’d walk about a mile or so down the wash that goes by me and out into the desert so I took off down this wash. 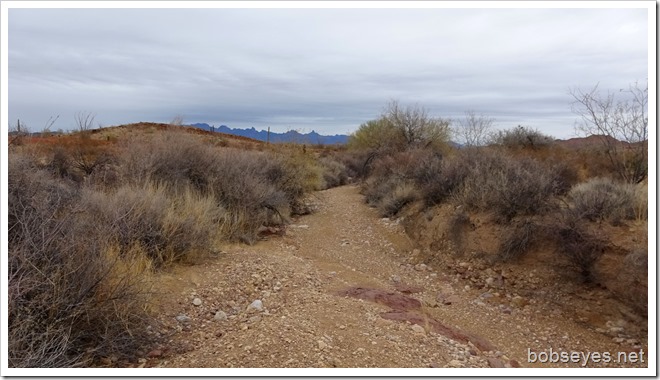 Of course other washes came into this one and they all pretty much looked alike.

I spotted this cement thing up ahead so I went over to check it out and crossed an old jeep road that I knew said no jeeps but there were fresh tracks on it.  This fact would get me lost a bit later. 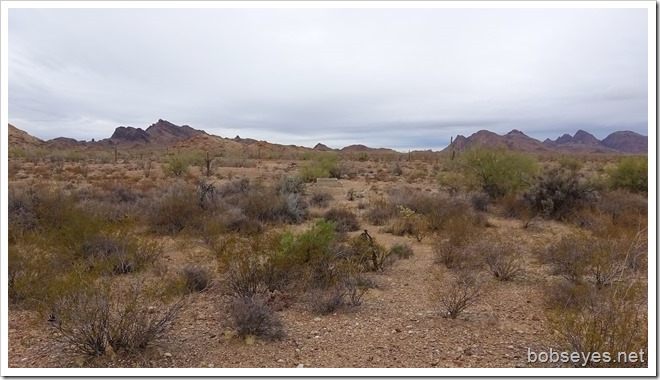 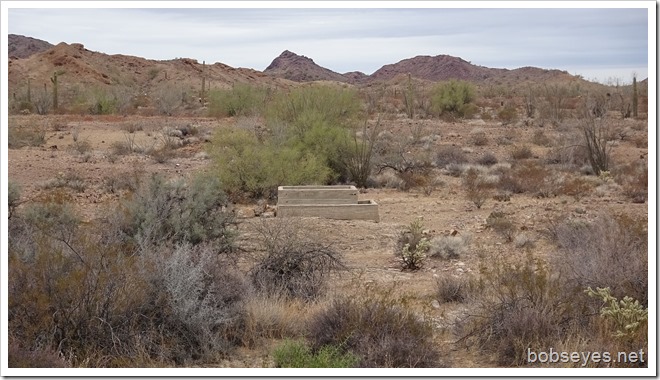 Time to turn back

I walked on past that area and eventually turned back headed for the van, I hoped, all I  had to do was hit the main road and follow it back to my van.

I went through  here and soon crossed a road with some tracks on it that I thought were the no jeeping road with the tracks I’d seen earlier. The place I crossed the road was in a wash so it didn’t look like the main road, but it was and this is were I screwed up because I kept going looking to run into the main road soon, but I didn’t. 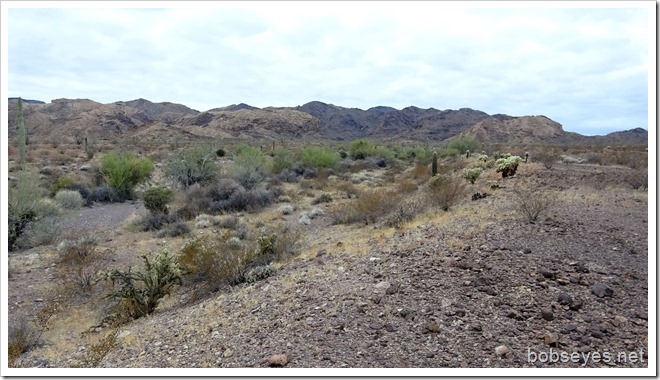 About an hour before dark and I’m lost, sorta

I had about an hour before dark. I was thinking I might have to spend the night in a cave and wait until tomorrow when some one drives in the main road so I could find it. The first and only people that drove in the next day did so about 2pm as it turned out.

I had no flash light but did have a lighter. If it got dark on me I would need to stop and spend the night where I was. No moon.  I was dressed lightly which shouldn’t be too bad as the nights were about 45 degrees F. I’d be chilled but figured I could make it and could start a fire if I needed to. But really any movement in the dark without a light would be insane with all these prickly things around here.

When I crossed the thought to be closed to jeeping road I was about a  mile down the road from the van.

I crossed that road and continued looking for the main road where I thought it should be, but I couldn’t find it. I was hurrying along now as it wouldn’t be long before dark. I veered to the right and turned from the hills that were there. I was running out of time.

All of a sudden I came up onto this road, the main road and I had about a half hour until dark. I looked at the road with a smile as I knew I’d make it back to the van now. 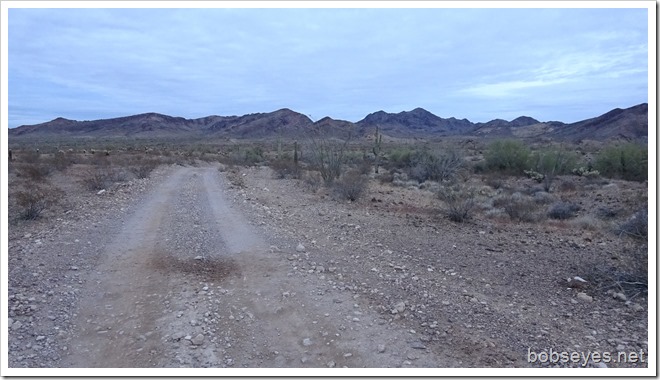 Once I was certain which way the van was I started up the road at a good pace to make it before dark. It was at least a mile maybe two to make it back to the van.

Here was my first view of the van pared to the right there and it’s not dark yet, but will soon be, but I’m good for the night. Home sweat home. 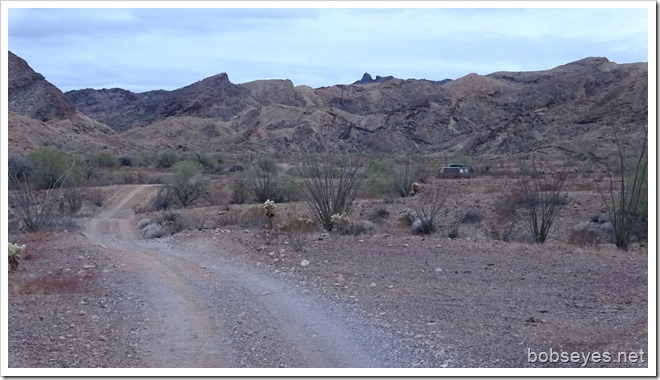 That wrapped up the day for more exercise than I planned for. Such are experiences while exploring and good that no spiders and monsters were able to get me in the night. :O)