Learning How To Get the Sediment Out of the Old Well

Working on the old  well

After watching some YouTube videos last night I got the idea of  how to make the suction head to remove sediment from my old well. I rounded up this old pipe to make it out of. I have a lot of junk around the place cluttering up the place but it does provide a lot of parts to make stuff for stuff I do.

That’s just the way it is

I’m basically a jack of all trades which means I have tools for each trade and materials of each trade laying around the place and I admit they have all gotten ahead of me and the place is cluttered up pretty bad.

I used to  know where it all was in the piles but older age messed that up and now I don’t know where most of it is so I spend a lot of time hunting around for stuff that I think I have somewhere.

Anyway that’s just the  way it is and it’s me whether I like it or not.

So anyway I found this little pipe in the stuff. 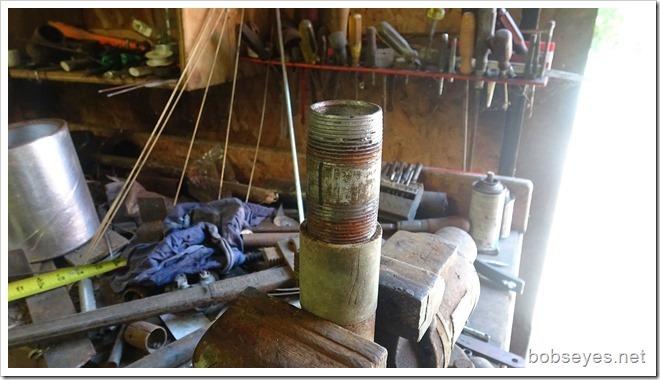 I got out the power hacksaw and cut the pipe so it now has teeth. I later  learned that longer teeth would be better as it shuts the suction off when the teeth get buried in the  mud so it stops working until I free it. Longer teeth would help that problem some and I plan to make another one tomorrow. 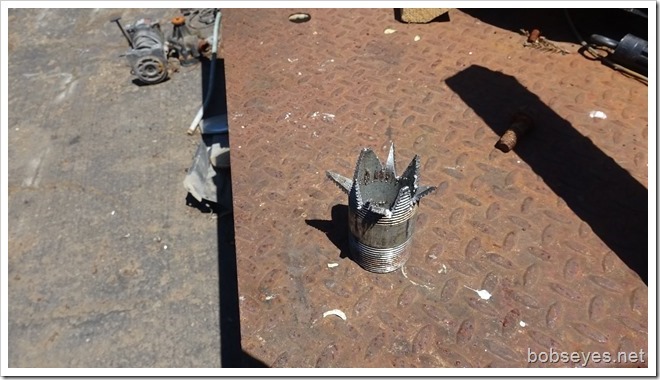 The old well work site. My well is about 50 feet deep and plugged up with about 7  feet of sand and silt that I’m  trying to remove to unplug the well casing as where the silt is, is where the holes are to let water come into the casing. 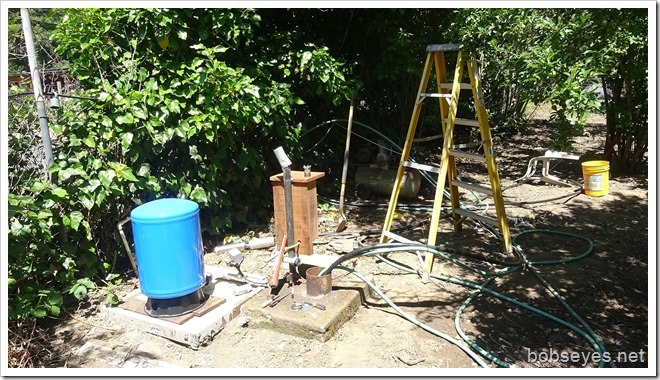 I pulled my old water jet up out of the well to put the new head on it and found that it was all plugged up and cleaned that out. I didn’t know it was plugging up until  now and learned a way to unplug it in the well hole which helps a lot. 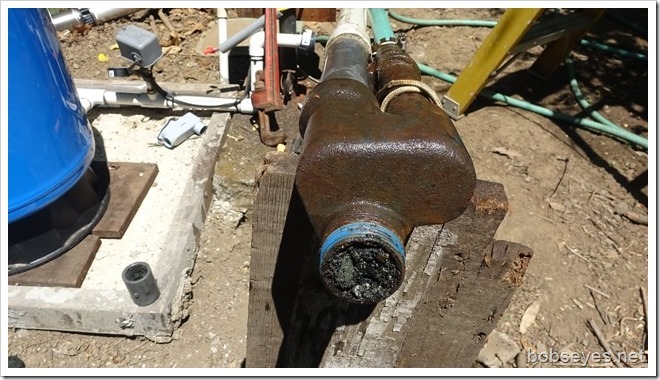 Here’s the new digger head I made installed and ready to get lowered into the well and see how it works. I can’t turn this but can only pull it up and down to break up the silt and sand. The old jet  provides suction to pull the silt and sand up and out of the well. 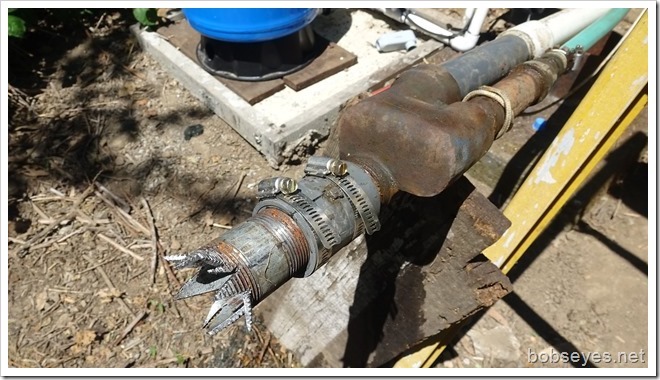 And this outlet valve is a big improvement

I added this valve to the outlet so I can turn it off which forces the water to go out the digger part and keeps the thing from getting plugged up. I also discovered forcing the water out the digger head was a good way to dig as the water acted like a jet and really dug into the silt. I also learned one needs to put ones hand in front of this output water to feel if the sand and stuff is getting sucked up to know how and if it’s working to make adjustments. The bucket is just to catch the sand to see how well it’s working. 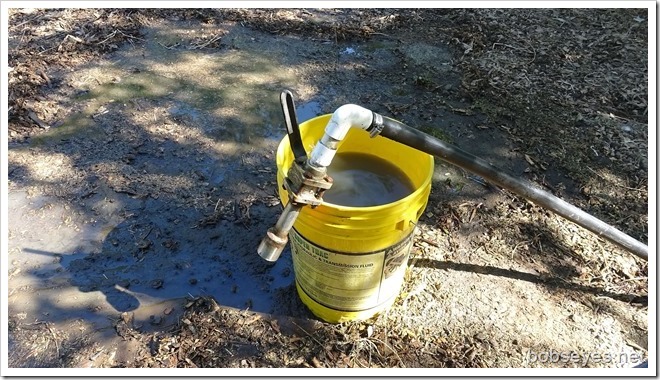 It’s not very fast but it does work. Here’s the sand I removed after an hour or so. 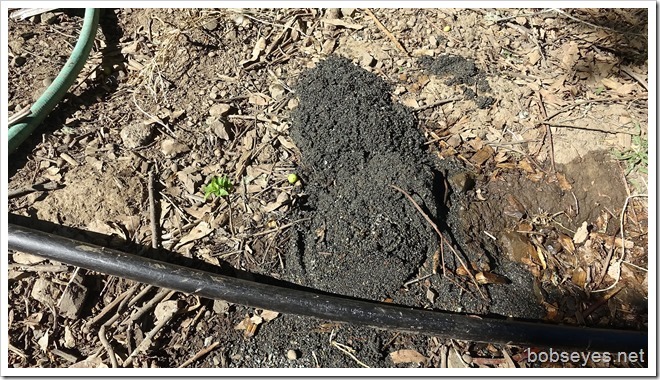 I worked on that on and off throughout the day and finally my back said that was enough.

In the evening the power went off around 6 so since I couldn’t do much around the place I rode the dirt bike up to check the water level to see if what I was doing was using a lot of water.

We gained about two feet since yesterday which is good so I can use more water to unplug the well. The pink ribbon says the tanks are almost 5/8 full. 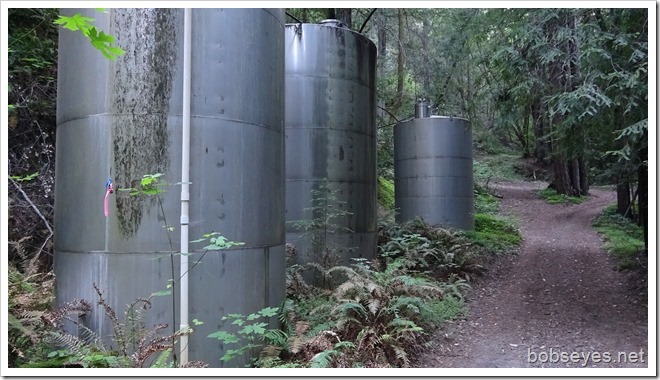 I rode on by the tanks and up the hill and stopped in a couple of spots to throw sticks and rock off the road. 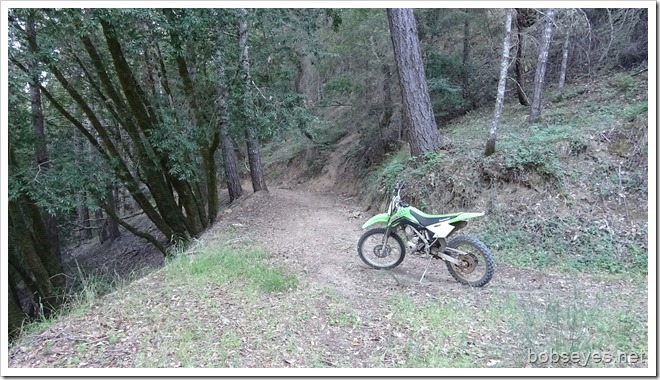 On the way home I stopped here to  throw these redwood limb sticks off the road. 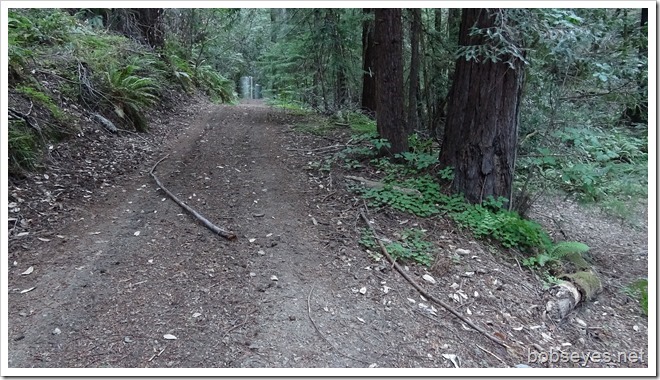 Back home the power was still off. It seems a neighbor that lives up the road fell a tree across the power lines and it’s going to take quite awhile to get it fixed so I’m using my laptop to get this post together but won’t be able to post it until the power comes back on.

Anyway since we had lots of water I worked on the old well project until  just before dark and got down another few inches.

(Visited 148 times, 1 visits today)
This entry was posted in Uncategorized. Bookmark the permalink.