Lazy Day, An Evening Ride and Working On the Rat Problem

I didn’t have any plans for the day.

I was thinking I’d just mess around today taking it easy chair hopping around the yard with the chickens and then go for an evening kayak down at the river.

After watching my cam on the computer to see what happened last night after I went to bed I realized I did something wrong last night dealing with the rats.

And that was I took the bad bait can away at 2AM. What I saw was the rats came back to eat a lot after that and only got good stuff instead of the bad stuff as I’d put the good bait can back when I removed the bad bait can.

That all made me think. Using the baking soda, it was supposed to make the rats blow up or puff up and I’d expect rather bad stuff to happen to the rats more sooner than later. That didn’t happen on the baking soda.

Now what I was thinking is the plaster of Paris would be slower acting, a plug up action would start, so it might take a lot more time to act so it wasn’t a good idea to remove the bad stuff. In other words when they got plugged up they would start to starve and that might take some time so I needed to keep feeding them as they’d be hungry.

I had to remove the bad bait can because in the morning my little chicks would get into it. I doubt it would bother them as chickens have a different type of internal system, but I didn’t want to take the chance.

I needed a way to keep the bad bait in the pen all the time and I came up with this piece of old bucket I cut off the bottom and put a small hole in the bottom only big enough for the rats to get into and not the chicks.

Here it is. I put the other bait can inside it and will try it out tonight. Of course I expect them to take some time to get used to it. 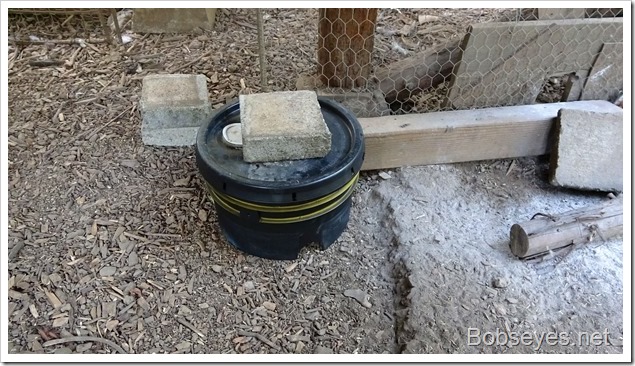 Here’s the small hole at the bottom for the rats. I figure if the hole isn’t big enough for the larger rats to get into, they can just dig up the ground a bit. 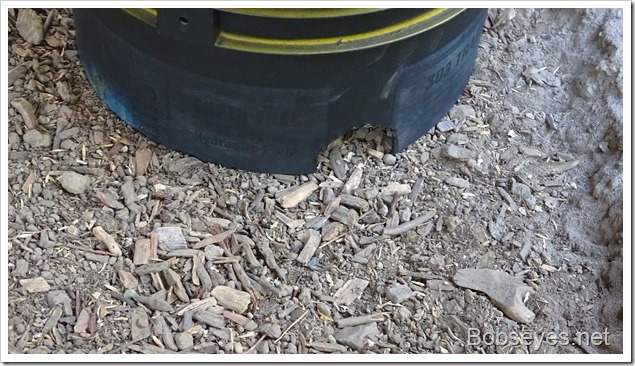 Then I got some chicken seed out and ground it up to use in the bad bait tonight. 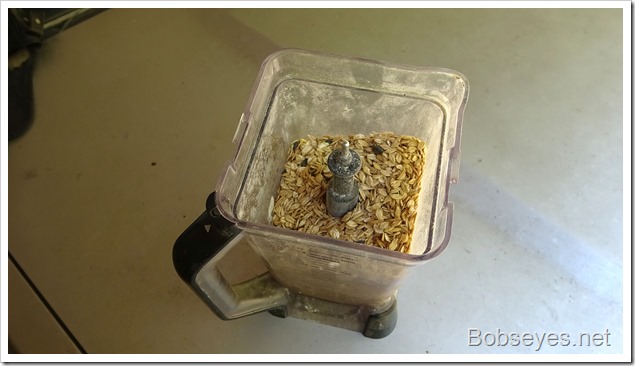 I did some chair hopping around the yard and some napping too.

The chickens always come around me when I’m sitting in a chair hopping around the yard. 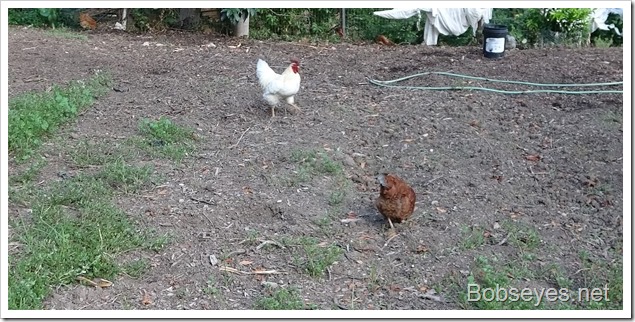 They sure like to dig in the wood chips. 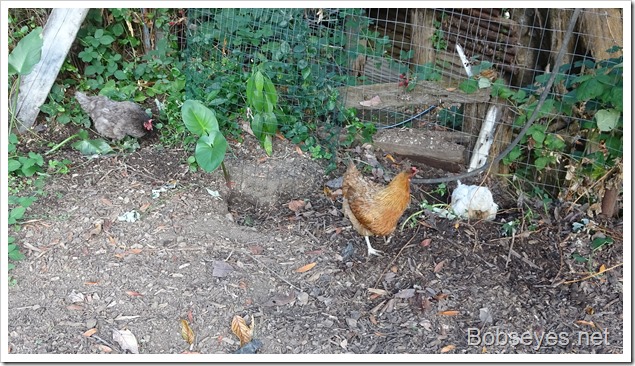 Well, evening came around and I didn’t feel like going for that evening kayak trip at the river.

Instead I forced myself to hop on the dirt bike and go for an evening ride up in the hills.

I rode on up and stopped on this trail to clean small rocks off the trail. 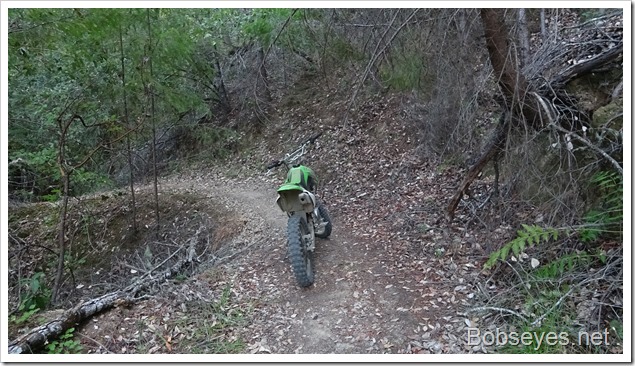 I went over to have a look at this downed tree to see if I could move it but no, it will need some cutting on it with a chainsaw. 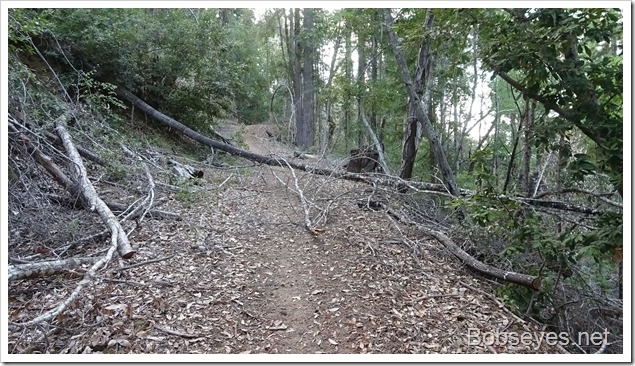 The sun was almost down as I rode around on the hilltops. 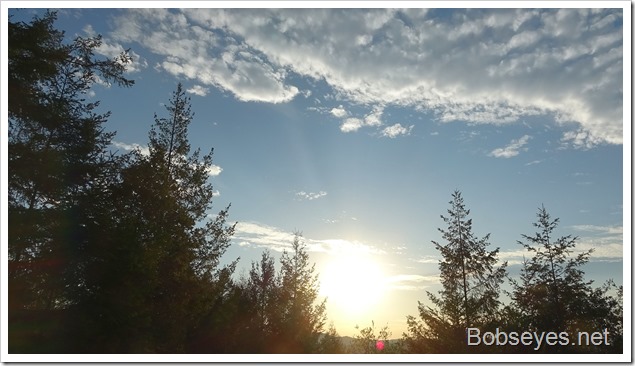 I rode around for about an hour and a half and then headed on home for the day.

Setting up the rat bait

I mixed up some bait with the plaster of Paris and set out both the new improved container and the older one they used last night on the right. 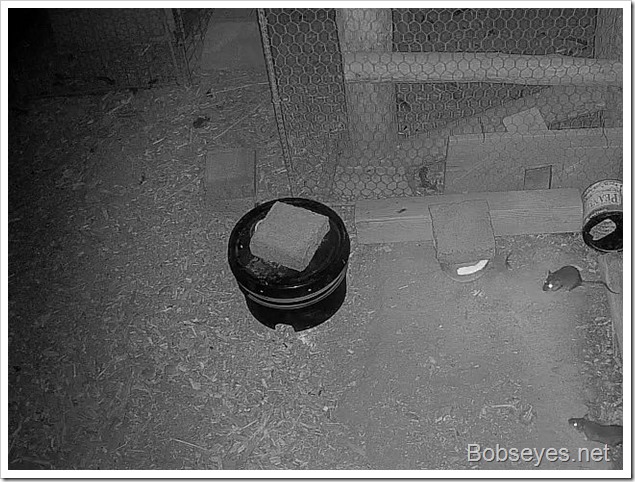 The three little rats showed up first and were very cautious and would not eat out of the original can, but they did check out the new container but were very couscous of it.

About an hour later the big rat showed up and went to the original container of bad stuff and started feeding. That got all the other rats feeding.

This picture shows the big rat in the bait can on the right and one of the little ones going into the new can because the big rat won’t let it feed on the right so at least they are starting to accept the new bait can as I will have to remove the one on the right again later tonight to keep the chicks out of it. 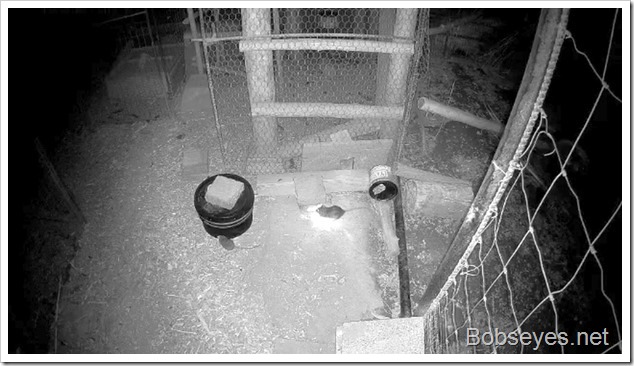 (Visited 118 times, 1 visits today)
This entry was posted in Uncategorized. Bookmark the permalink.

2 Responses to Lazy Day, An Evening Ride and Working On the Rat Problem